ELLISVILLE • Holt Priest was in the prime of his life at Parkway West High School.

In school, his days were measured in high-fives with friends and the football games in which he played and volunteered. In school, he was well-known and valued. He was voted Mr. Spiritfor homecoming and won a big award for embodying inclusion and respect.

The story of his blossoming from a lonely student with autism, a developmental disorder, to one of the most popular kids at school captivated the St. Louis region last year.

Now, the 19-year-old retired mayor of Parkway West finds himself spending much of his time at home, watching the weather, the news and “The Price is Right.”

A year after graduating from the high school that grew to love him and became his world, Holt and his parents are struggling to adjust to a reality of adulthood that is not as kind.

For people such as Holt who have autism, leaving school means losing a daily circle of friends, a full schedule to keep busy and a network of teachers who are there to help. For Holt, it was a consistent structure that gave him responsibility and purpose.

Now, Holt’s future hangs in the air, like a hot-air balloon with nowhere to land.

When asked what he wants to do in the future, Holt can’t say.

“I have not decided yet,” he said.

Holt got a job a couple months after graduation, at the Mod Pizza fast-casual restaurant in Ellisville. But he only gets to work eight hours a week, sweeping the floor and wiping tables.

His parents are looking for a more engaging job for him, one where his talent for making people feel happy can be put to greater use. His mother doesn’t want to believe that her son will be cleaning for eight hours a week for the rest of his life.

“It was good for him to move on to a place that wanted him. It’s been a good first job for him to be in a safe, supportive environment,” she said.

“I guess we had hoped for … we just feel like he’s capable of more.”

Researchers agree there is a gap in opportunities and services for young adults with autism after high school. Experts call it “the cliff.”

Most services for young people with disabilities are delivered through school, because federal law requires it. But once they finish high school, that federal mandate ends.

It is largely left to parents to find a place for their children to land, whether it be a job, college or independent living. But research shows that the services their children received in school often don’t translate to productive life outcomes.

Studies show that people with autism are far less likely to find employment or continue their education after high school, even compared to people with other intellectual or developmental disabilities.

One 2015 study by Drexel University researchers shows that more than 60 percent of young adults with autism are not working or continuing their education in the first couple of years out of high school. There is little to no credible data showing how they fare after those first couple of years, said Paul Shattuck, a co-author of the study.

“The reality is the majority of young people, when they leave high school, they’re not transitioning into anything other than Mom’s basement,” he said. “It depresses me, frankly.”

Shattuck speculates that few people with autism are employed because more jobs today are service-oriented. They often require connections and communication with customers or colleagues. The cliff exists despite $10 billion to $12 billion spent on services for people with autism each year, Shattuck said.

“How is it that we have so much effort being spent, and yet outcomes remain so poor?” he said. “I don’t have an answer.”

For two hours a day, four days a week at Mod Pizza, Holt buses plastic tubs of pizza trays and soda cups. He sweeps litter from the floor into a dustpan. He stocks the front counter with bottled beverages. And he folds towers of pizza boxes.

He’s also Mod Pizza’s loudest, and often only, greeter. When the door opens and customers walk in, Holt jerks his head up to shout across the room, “Hello!” When they leave, it’s always: “Bye, guys! Have a nice day!” Many customers ignore him, but a few send him a smile.

When he started his job, Holt took Mod Pizza flyers and passed them out at Parkway West football games, telling everybody, “Come see me at Mod!” his mother said.

Holt started at Mod Pizza in August with the help of a job coach at St. Louis ARC, a United Way agency that provides services to people with intellectual and developmental disabilities. Job coaches help them find work that fits their abilities and get the extra training they need, which often involves walking them through their job step by step and repeating tasks to memory.

“People have a stigma that just because people have a disability means they can’t join the workforce,” said Rob McDonald, Holt’s Mod Pizza manager. “But that’s not true.”

But what Holt doesn’t get to do is assemble the pizzas, the core job at the restaurant.

He used to have that job. But he kept pushing his glasses back with his gloved fingers in between handling the ingredients. Sometimes, Holt piled pizza toppings all in the middle instead of spreading them out, said Lesley Trenn, Holt’s co-worker.

When he did, she saw some customers roll their eyes at him.

Their disdain baffles Trenn. The way she sees it, he’s the most popular guy at the restaurant. Friends from Parkway West visit Mod Pizza just to see him. Holt just wants to do a good job, she said.

“Some people could be so harsh,” Trenn said, with tears gathering in her eyes. “I don’t think people realized he just wants to be normal.”

McDonald said he wishes he could give Holt more duties and longer shifts. He said the restaurant tried giving Holt more training. But the restaurant isn’t busy enough to need an employee like Holt to clean for more hours.

“This is what works best for now,” McDonald said.

Kim Priest said she knows her son can handle a better job.

In the meantime, she and her husband, Steve, have tried brainstorming other options. Steve dreamed up an idea that he would help his son start his own vending machine business, where Holt would fill the machines with snacks and greet people along the way.

She dreams of Holt being a mail carrier, because he could greet many people for a short moment every day. But Holt can’t drive, because he loses focus easily — yet another roadblock.

“He has all these strengths,” she said. “But there are these holes and limitations.”

On a recent warm Tuesday afternoon, Holt was sitting on the sidelines as the Parkway West baseball team’s unofficial cheerleader, rooting for Parkway even when a player struck out.

During the game, he called his friend on his cellphone to see if he would be coming over after football conditioning. When the friend walked over, Holt showered him with questions about life at his old school.

His friend answered Holt’s questions with his eyes watching somewhere else.

Holt attends Parkway West games several times a month. It’s one way he gets himself out of the house.

Holt also likes grocery shopping and doing errands with his parents. On Fridays, his old elementary school counselor takes him shopping at the mall or bakes cupcakes with him.

Meanwhile, his parents find time around their work to drive him where he wants to go.

“It’s nice to look for things to do and not be bored,” Holt said.

As soon as the last ball of the game was pitched, Holt’s mother stood up and rolled up the blanket she was sitting on, ready to go home. The day was hot and the game had stretched on for 1½ hours.

But she couldn’t find Holt. He was on the other side of the field, saying hi to a girl he knows who was keeping score. His mother tugged him back toward the car.

“He intuitively wants to go the extra step to make sure he’s connected with people,” she said before the game. “He’s adjusted to the new normal. But he has so much to offer.”

School once meant isolation. Now, an autistic graduate is 'The Mayor' of Parkway West High

A classmate says Holt Priest is a 'symbol of how we can all come together.' 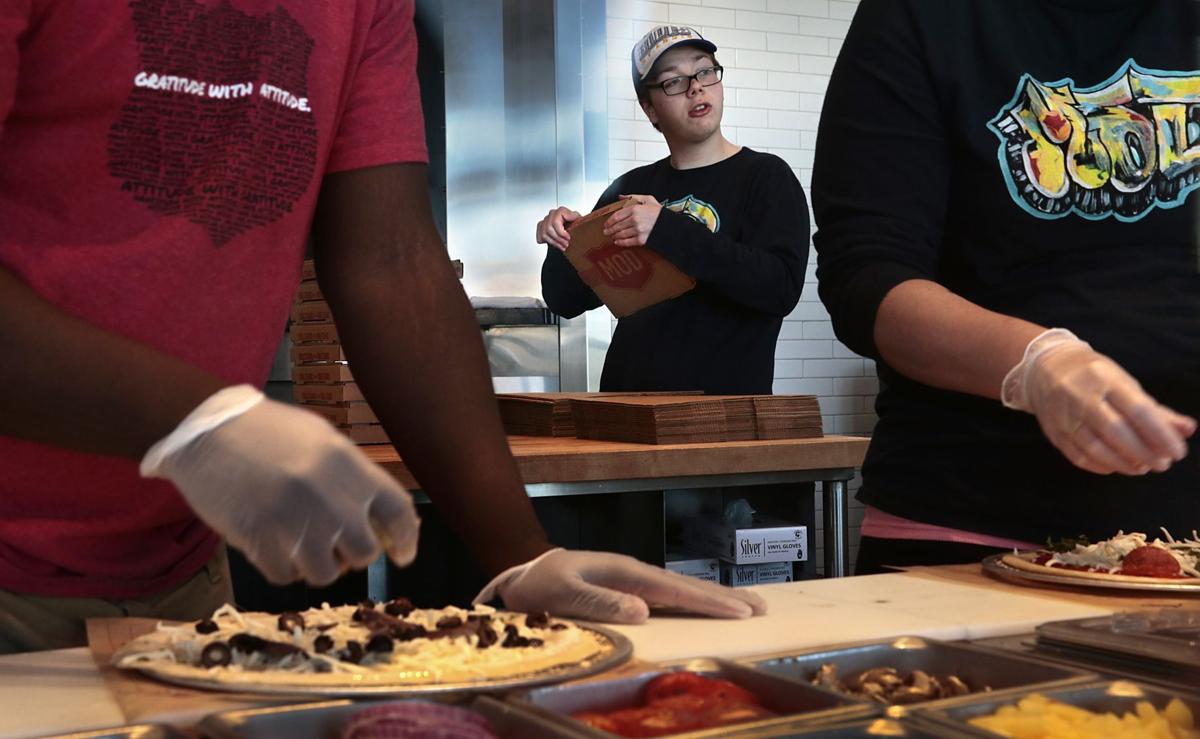 Folding boxes as coworkers make pizzas, Holt Priest looks out for customers at his job at MOD Pizza in Ellisville on Wednesday, April 12, 2017. Priest, of Ballwin, works at the pizza restaurant four days a week for two hour shifts where he cleans tables, takes out trash, and folds the pizza boxes. He graduated from Parkway West High School last May. Photo by Robert Cohen, rcohen@post-dispatch.com 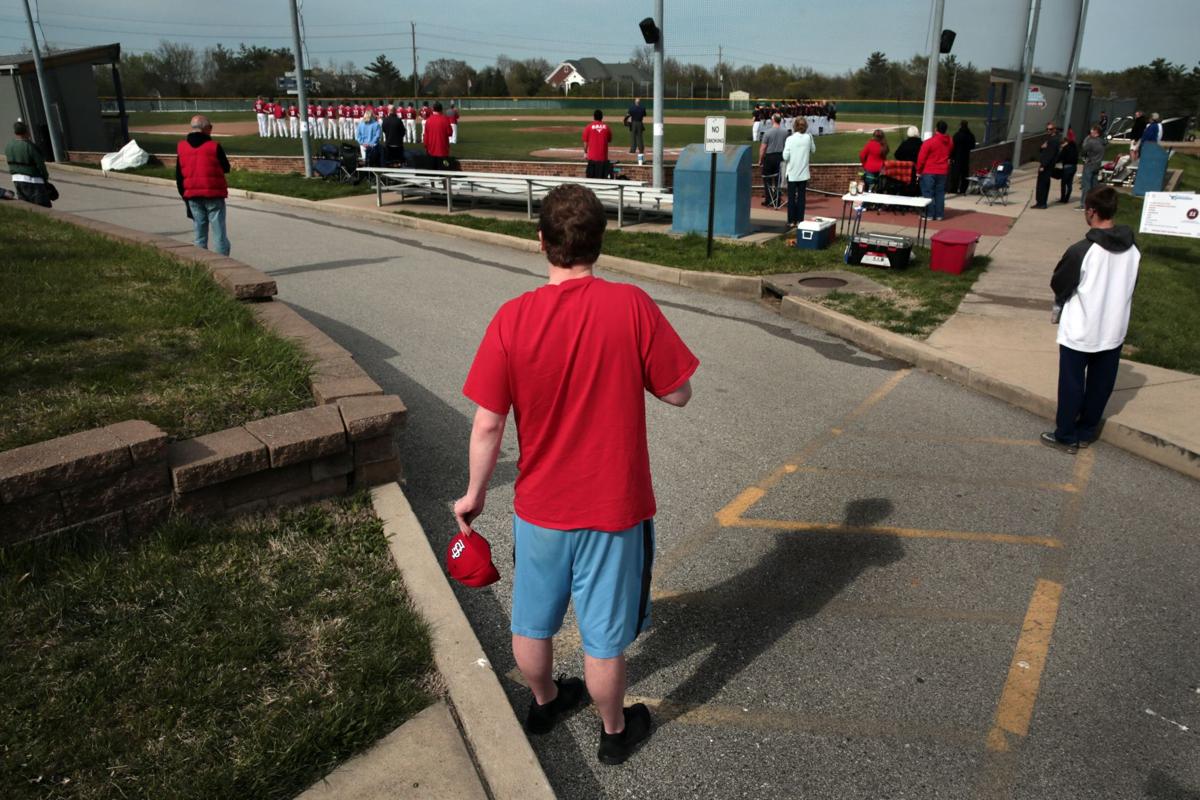 Holt Priest waits for friends as he removes his ball cap for the national anthem at a Parkway West baseball game against Parkway Central on Tuesday, April 11, 2017. Though Holt graduated last May, he continues to go to school events, slowly transitioning away from the school where he was known as the unofficial "Mayor of Parkway West." Photo by Robert Cohen, rcohen@post-dispatch.com 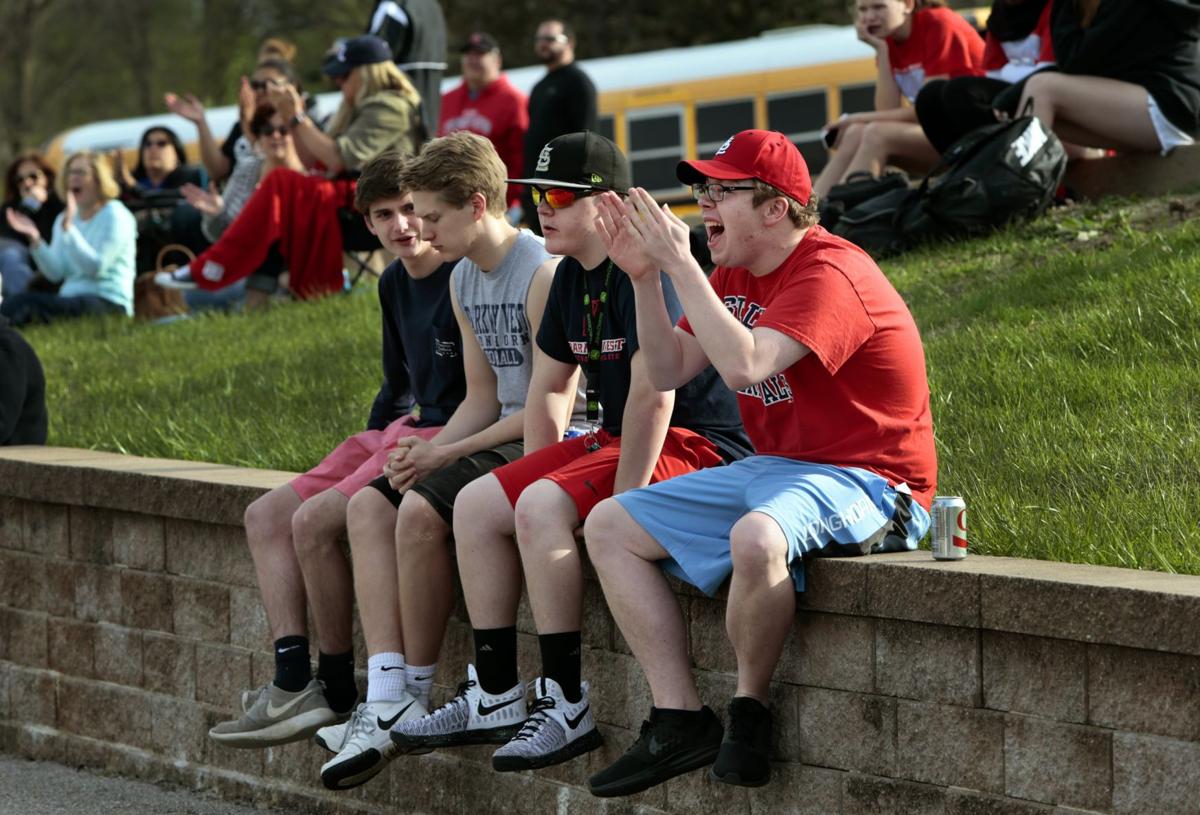 Holt Priest cheers a hit as he watches a Parkway West baseball game against Parkway Central on Tuesday, April 11, 2017. Though Priest graduated last May, he continues to go to school events, slowly transitioning away from the school where he was known as the unofficial "Mayor of Parkway West." From left are juniors Kyle Crews, Lance Anderson, Jack Ward and Priest. Photo by Robert Cohen, rcohen@post-dispatch.com 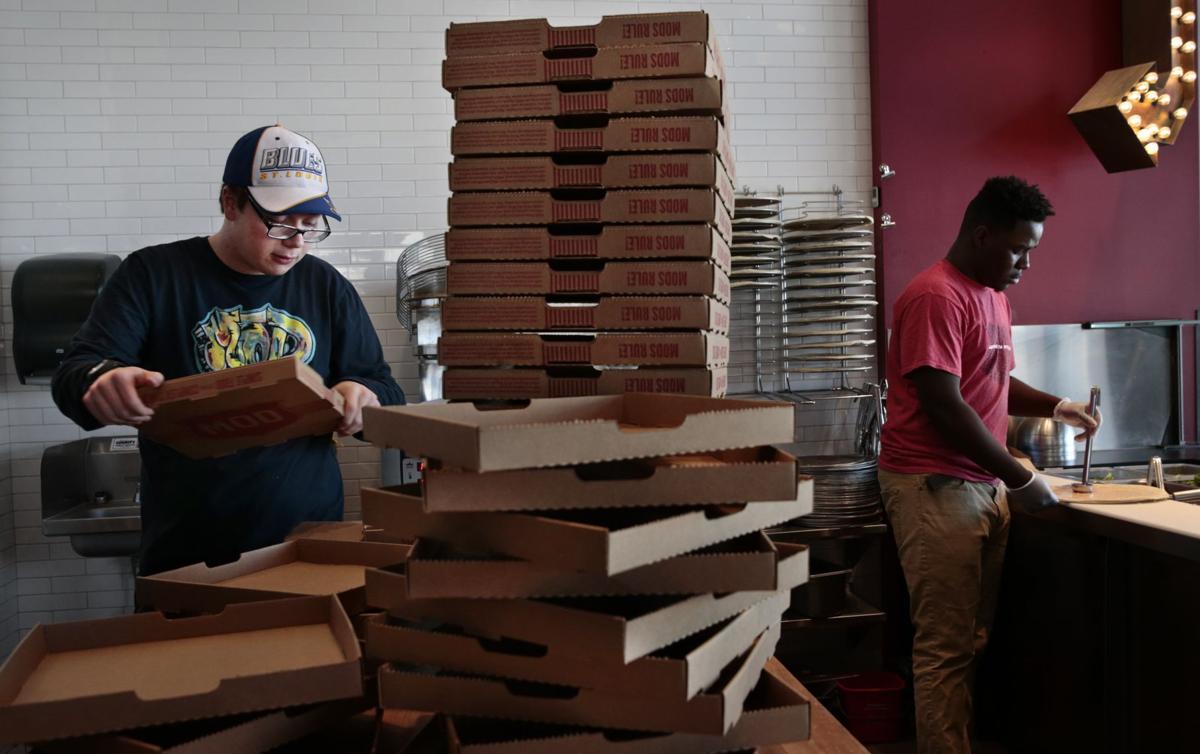 Holt Priest (left) and coworker Rodney Blanchard talk sports as they work side-by-side at MOD Pizza in Ellisville on Wednesday, April 12, 2017. Priest, of Ballwin, works at the pizza restaurant four days a week for two hour shifts where he cleans tables, takes out trash, and folds the pizza boxes. He graduated from Parkway West High School last May. Photo by Robert Cohen, rcohen@post-dispatch.com 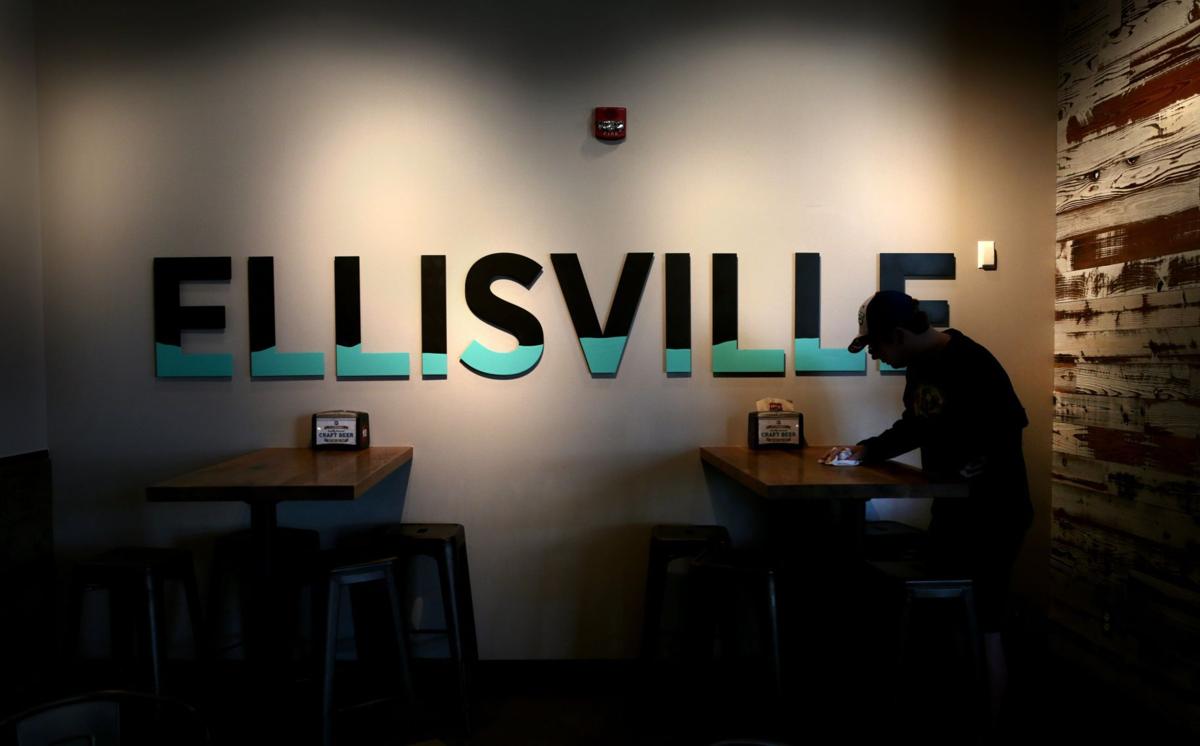 Holt Priest cleans tables at MOD Pizza in Ellisville on Wednesday, April 12, 2017. Priest, of Ballwin, works at the pizza restaurant four days a week for two hour shifts where he cleans tables, takes out trash, and folds the pizza boxes. He graduated from Parkway West High School last May. Photo by Robert Cohen, rcohen@post-dispatch.com 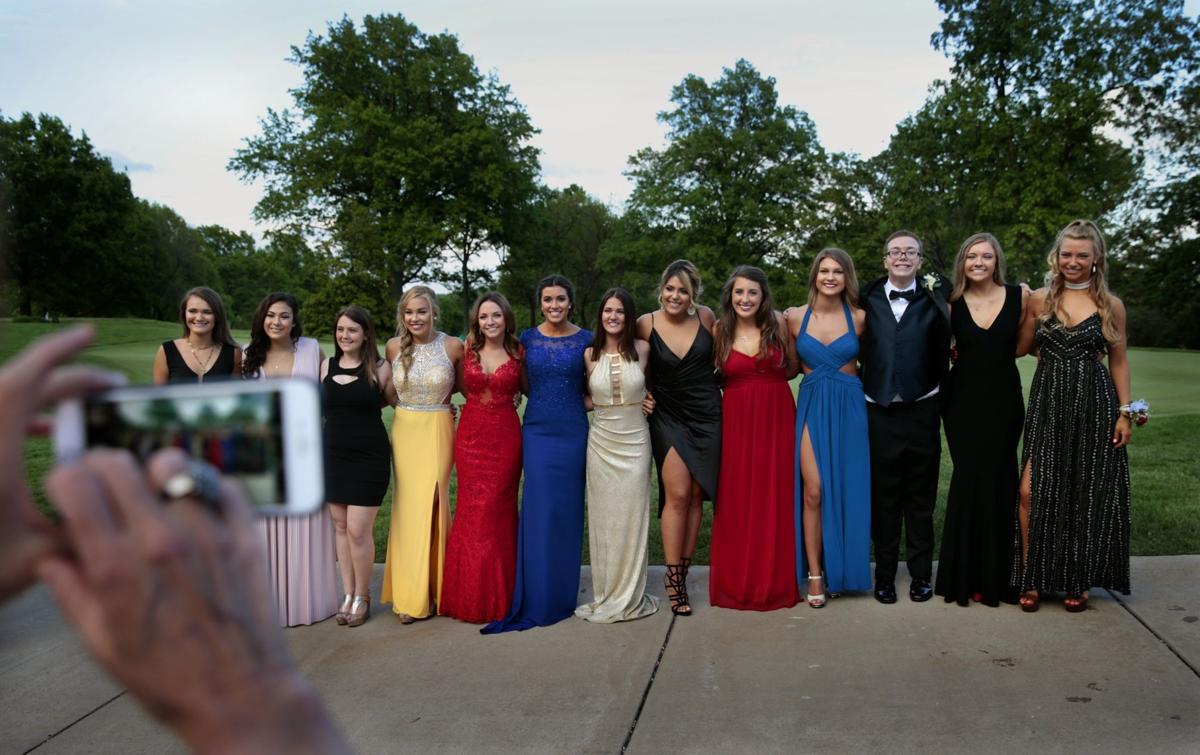 As Parkway West parents photographed their daughters gathered at Meadowbrook Country Club in Chesterfield before the senior prom, Holt Priest quietly found himself a spot on Saturday, April 30, 2016. Holt, a popular student with autism, was integrated into regular classrooms as a sophomore. Photo by Robert Cohen, rcohen@post-dispatch.com