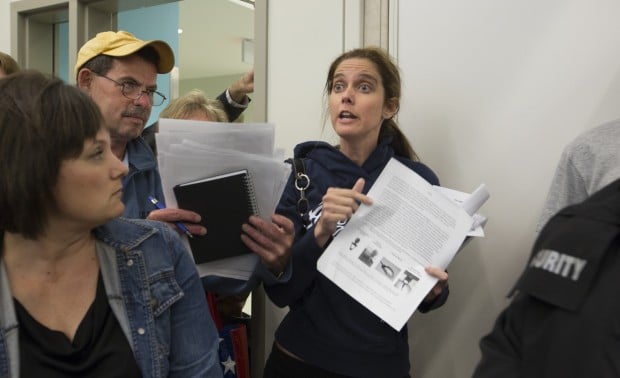 THURSDAY, MAY 2, 2013 - Lisa Pannett, a Mehlville schools parent, shouts "are you going to do this to our kids!" as she holds up a page from a report by the U. S. Department of Education during a forum about Common Core Standards that may be implemented in many schools across the nation. The discussion was held at the Lindbergh School District, 4900 S. Lindbergh Blvd. The report can be found at http://www.ed.gov/edblogs/technology/files/2013/02/OET-Draft-Grit-Report-2-17-13.pdf �Photo by Jerry Naunheim Jr. 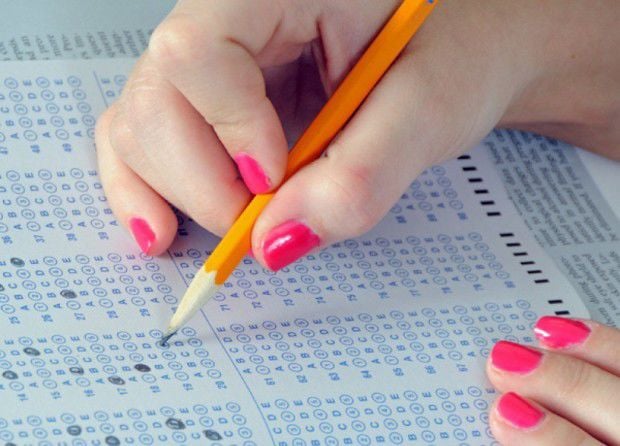 James Shuls of the conservative Show-Me Institute considers himself an outspoken critic of the Common Core, a set of national standards that define what English and math skills public school children should learn at each grade level.

But even Shuls was surprised at how quickly a public meeting on the subject got out of hand this month, when parents and grandparents began shouting at Missouri education department official inside a Lindbergh School District meeting room.

They accused the official of lying. Of wanting to collect private information about their children. Of trying to control students’ thoughts.

The growing backlash to the Common Core, to be fully in effect in Missouri and Illinois in the 2014-15 school year, has less to do with the skills and knowledge the standards promote than the motivations many parents fear are behind them.

They were developed in 2009 after the National Governors Association began pushing for a common and more challenging set of English and math standards for the nation’s schools. The effort involved hundreds of educators. It received bipartisan support from the nation’s governors. Backers include Republican Jeb Bush, former governor of Florida, and Democratic Missouri Gov. Jay Nixon.

Once educators developed the standards, the Obama administration endorsed them. The U.S. Department of Education made adoption of the Common Core one of two options for states to receive a waiver from the No Child Left Behind law.

Some now point to that moment as the one that turned the debate over the Common Core away from what skills children should be learning. Now, much of the opposition is fueled by contempt for any federal role in public education and, more specifically, for the policies of the Obama administration.

“That has certainly heightened it,” said Anne Gassel, who has been writing critically about Common Core on the blog, Missouri Education Watchdog.

“A lot of where this started is the mistrust with this administration,” said Jane Cunningham, a Republican from Chesterfield who served in the Missouri Legislature and is neutral on Common Core. “If he had not embraced it, it would not be the problem it is.”

The Common Core standards are designed to better prepare children for college and careers, promoters say, and to reduce the likelihood students will waste time and money on post-secondary remedial courses.

More specifically, the standards require students to be exposed to more nonfiction at all grade levels than in the past, and to have a deeper understanding of math. Some math skills, for example, would be taught one year earlier.

The Common Core is not a federal program, state officials say.

On repeated occasions, Missouri Education Commissioner Chris Nicastro has said local control of schools will remain once the standards go into effect. Teachers, Nicastro says, will still determine how best to help their students meet the expectations. School districts, she says, will continue to choose curriculum.

But parents who hold the belief the federal government will control textbook selection and lesson plans have asked if they could opt out of Common Core, which the Missouri and Illinois state boards approved in 2010. They’re signing petitions requesting that the state board repeal the standards. Their fears and concerns are exacerbated by partisan newsletters and websites that link the Common Core to socialism.

Kris Beaton, who has children in Rockwood schools, said she learned about Common Core from a friend. Then she heard about it on the radio. She said her main concern is that the standards will eliminate local control of schools. “It’s overwhelming,” she said.

Like many parents who oppose the Common Core, Beaton’s concerns have grown as she has attended meetings and heard and read things that scare her, including blogs that link to a single page in a 126-page U.S. Department of Education draft report titled “Promoting Grit, Tenacity and Perseverance: Critical Factors for Success in the 21st Century.”

The passage describes four devices, including a pressure-sensitive computer mouse and a facial expression camera that can monitor students’ engagement during online tutoring.

The reference in the report is from an academic paper unrelated to Common Core. It does not reflect or recommend department policy, said Daren Briscoe, spokesman for the U.S. Department of Education. The draft goes on to state the devices are “intrusive or impractical for use in school settings.”

But conservative bloggers have linked the two, and some parents worry that the Common Core means facial scanning devices are coming to classrooms.

“My biggest concern is, are you going to hook our kids to these things?” said Lisa Pannett, a parent with children in the Mehlville School District. “Because I’m not on board with that.”

Such fears seem to have caught educators across the state off guard, leaving them almost slack-jawed when pressed about them at board meetings and forums.

At the meeting at Lindbergh, Pannett shouted questions from the back of the room about whether her children are about to become science experiments.

“Data mining!” one man yelled at Maureen Clancy-May, area supervisor at the Missouri education department, leading the meeting. “Why don’t you talk about that?”

“No more data will be collected on students than there is now,” Clancy-May said.

Since 1989, the state has collected student data for school accreditation and accountability purposes. The data includes student gender, ethnicity, attendance, special education placement and homeless status. The data is protected by federal privacy laws. The data categories can be found on the department’s website.

For educators, revisiting standards in public education is nothing new in Missouri — the state education department has done it several times since 1993 when the Outstanding Schools Act directed the State Board of Education to set academic standards for schools. But resistance typically comes from those questioning what grade level is best to teach kids certain skills — not from people accusing the state of thought monitoring and control.

“In the past, you had rooms full of educators with concerns,” said Jim Simpson, superintendent of Lindbergh schools. “Now it’s rooms full of people with strong political views.”

The school district has been preparing teachers for the Common Core rollout for two years, he said. And none of it involves monitoring devices or curriculum from the feds, he said.

“The idea that we’d be putting electrodes on kids? That is so sci-fi,” Simpson said.

When the standards kick in for all grade levels in 2014, “We will be upping the expectation of the reading level anywhere from a year to a year and a half,” she said.

The standards require that student delve deeper, but cover fewer, math objectives. In English, they will spend more time writing persuasively and critically than in the past.

“It’s about a 30 percent departure from what we’re already doing,” said Art McCoy, superintendent of the Ferguson-Florissant School District.

McCoy isn’t totally on board with the standards — he expects that student creativity, for one, will suffer with the shift to more “evidence-based” writing.

Shuls of the Show-Me Institute would prefer parents and schools to set their own standards, rather than states.

His bill no longer includes the repeal and was approved by the Senate this week. Instead, it would require the state education department to hold hearings in each congressional district before full implementation of Common Core.

Prior to the meetings, the bill also would require the department to present a fiscal analysis of implementation, as well as any additional data that would be collected on students.

In 2015, the state education department plans to administer new standardized tests to see whether students are meeting expectations set by the Common Core. To do this, however, it will need money from the Legislature.

A LOOK AT THE COMMON CORE

The Common Core Standards include detailed lists of what concepts ought to be taught when to students in grades K-12.

Missouri, like most states, is now reworking its standards to conform.

In some cases the Common Core is more rigorous than the former state standards.

The Common Core requires them to:

In other cases, the Common Core seeks earlier skill mastery.

Common Core asks fourth-graders to determine the theme of a story, drama, or poem from details in the text, and to summarize the text.

The Missouri standards expected that of seventh-graders, focusing more generally on having fourth-graders "identify and explain the relationship between the main idea and supporting details."

In many cases, the Common Core and Missouri standards were largely in agreement.

Common Core for writing in grades 11 and 12 says students should:

"Establish and maintain a formal style and objective tone while attending to the norms and conventions of the discipline in which they are writing."

There is one crucial reason why Common Core should succeed ("Common Core stirs fear and distrust," May 12). It will force all schools to adopt…

In defense of the Common Core standards

As with most topics, the most outlandish and controversial statements make the news: This is the case with the Common Core state standards. Th…

Regarding "Common Core stirs fear and distrust" (May 12):

Common Core standards were created and controlled by the states

Regarding the letter "Parents have reason to fear Common Core" (May 19) written by Robert Holland of The Heartland institute:

Education secretary stops in St. Louis to push for preschool

Arne Duncan spoke to a group of about 400 education officials attending a national conference in St. Louis.

Affton educator is inviting legislators to see the new standards in practice.

People are becoming torn between believing everything they read, or nothing.

THURSDAY, MAY 2, 2013 - Lisa Pannett, a Mehlville schools parent, shouts "are you going to do this to our kids!" as she holds up a page from a report by the U. S. Department of Education during a forum about Common Core Standards that may be implemented in many schools across the nation. The discussion was held at the Lindbergh School District, 4900 S. Lindbergh Blvd. The report can be found at http://www.ed.gov/edblogs/technology/files/2013/02/OET-Draft-Grit-Report-2-17-13.pdf �Photo by Jerry Naunheim Jr.