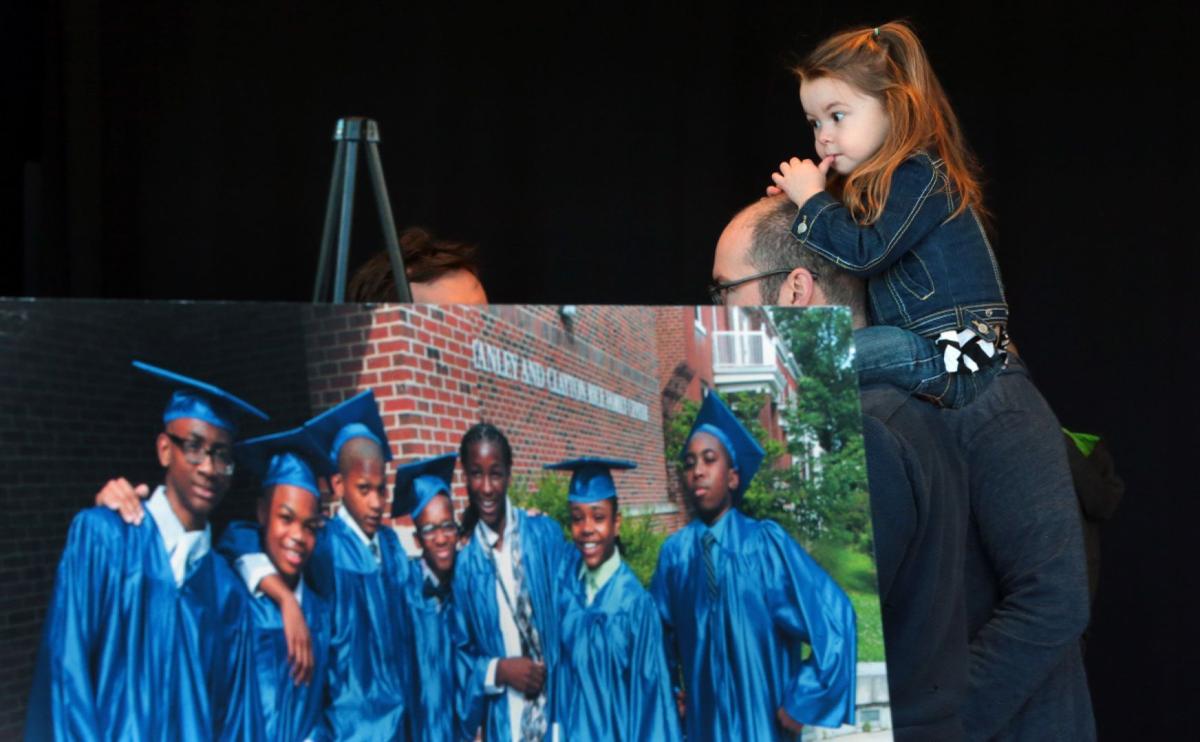 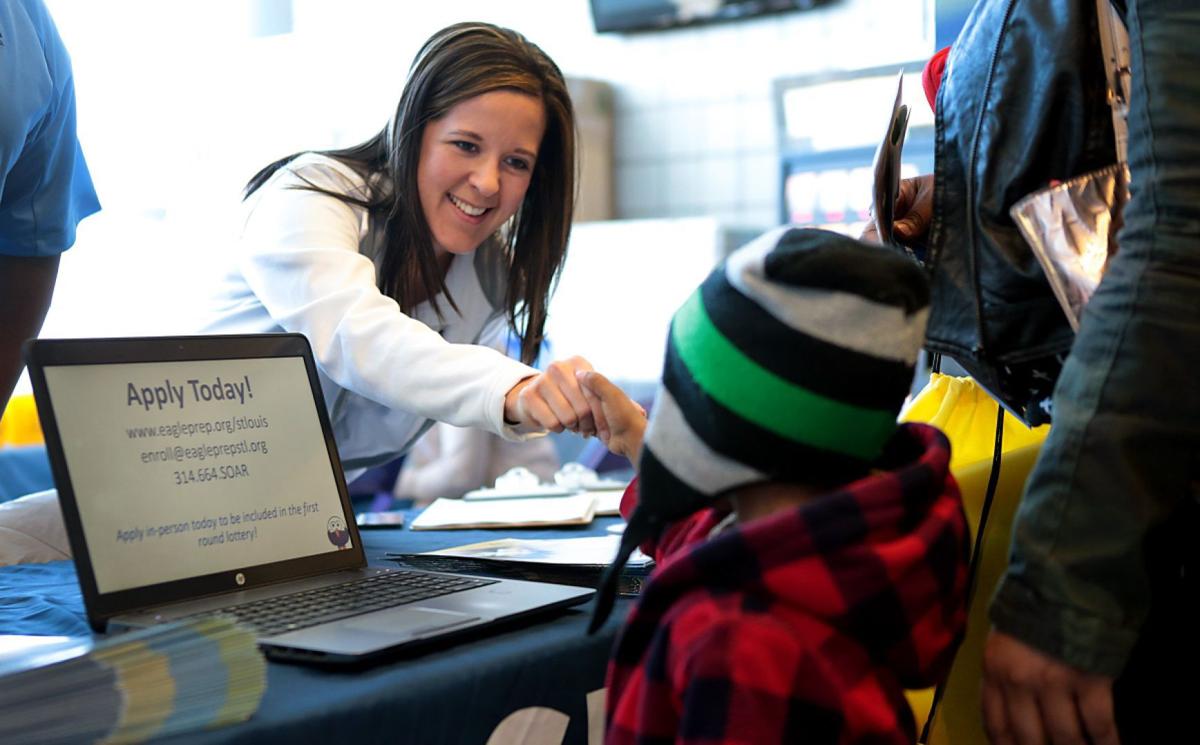 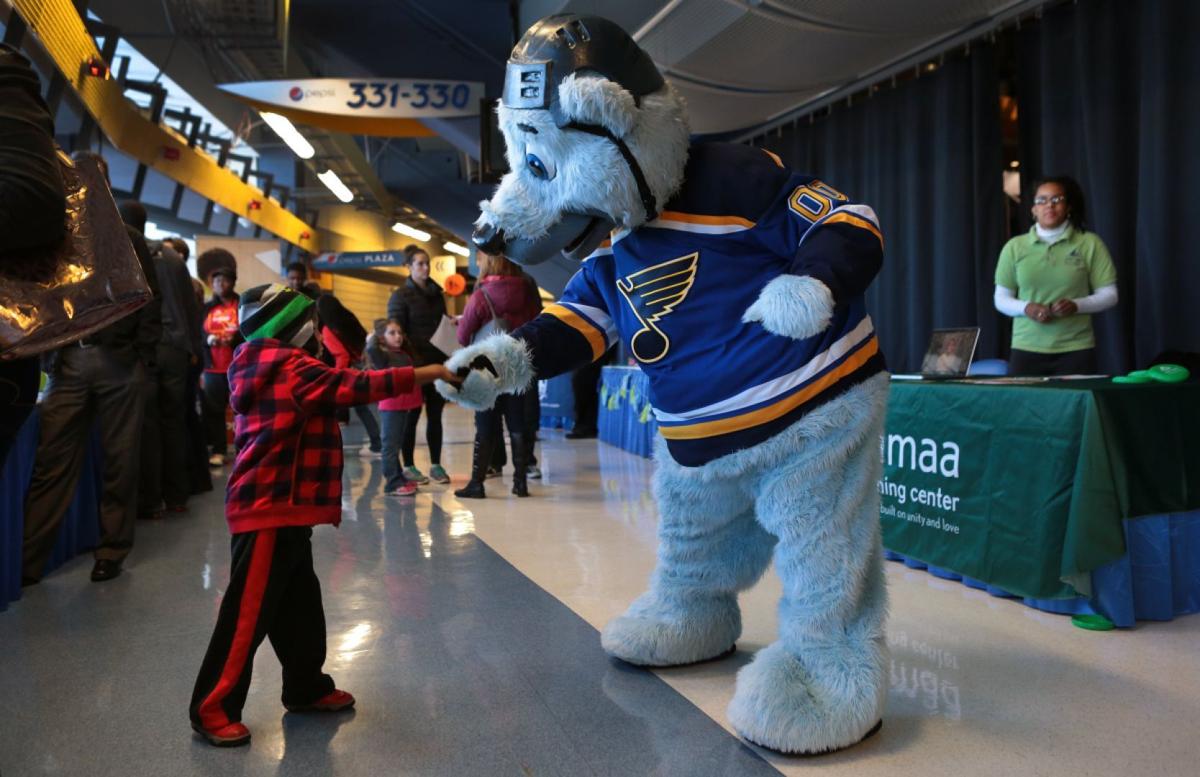 Louie, the St. Louis Blues mascot, meets Uriah O'Kelley, 5, as he and his mother Cora O'Kelley looked at St. Louis charter school options at a student recruitment fair held Saturday, Jan. 24, 2015 at Scottrade Center. "If you don't have a good start, it's a hard road," said his mother. Photo by Robert Cohen, rcohen@post-dispatch.com

ST. LOUIS • A steady stream of parents moved from table to table inside Scottrade Center, listening to pitches from charter school principals and recruitment directors who wanted nothing more than to enroll their children.

It was the largest charter school admissions fair to date in St. Louis, where eight new independent public schools are expected to open this fall: four elementary, two middle and one high school, plus an all-girls middle and high school that will focus on science, technology, engineering and math education.

If projections hold true, enrollment will increase 20 percent in charter schools — tuition-free public schools that aren’t affiliated with the St. Louis school system. That would put the charter school student population at almost 50 percent of the city school district. Thirty-four charter schools are expected to enroll 11,700 students next year.

At Saturday’s information fair, Kevin Dilly stopped one last time at the table for KIPP, short for Knowledge Is Power Program. The growing network of college prep charters will open two more in the city this August.

This time of year, city parents are awash in school applications as they make critical decisions about where to send their children. The first wave of deadlines has passed; parents began selecting magnet schools in St. Louis Public Schools in November.

Private schools are hosting enrollment fairs and open houses. And so are charter schools.

Despite their rocky start in the city, charter schools have increased in quality and number, and they continue to draw parents who aren’t satisfied with district options but also don’t want to move to the suburbs.

Many of the schools raise private money to bridge the gap between state funding and what the school needs to operate.

There are three language immersion elementaries; a middle and high school focused on the performing arts; a Montessori elementary school; and a dozen or more college-prep schools.

“This isn’t an experiment,” said Robbyn Wahby, education liaison to Mayor Francis Slay. “This is the way people in St. Louis go to school now.”

For the Dillys, charter schools offer a choice beyond home schooling, which is what they did before enrolling their children at the Spanish School. The city school system doesn’t have what they’re looking for, and private school tuition is out of reach. “We’re not going to move out west,” Dilly said.

He had just met Mary Stillman, the daughter of former U.S. Sen. Jack Danforth, who stood beside the table for Hawthorn Leadership School for Girls. The middle and high school is being organized by Stillman and others affiliated with Washington University, with a focus on science, technology, engineering and math.

On the opposite end of that row of tables was LaSalle Middle School, a Catholic school on the north side that will become a tuition-free charter school in August. The principal talked about his school’s success at catapulting children from the Ville into top college prep high schools.

“I’m always looking for better, greater,” said Vincent Smith, a city firefighter looking for a charter school for his son, who will be in kindergarten next year.

Just five years ago, the options were fewer.

Charter schools as a group were performing worse than St. Louis Public Schools. But their test scores have improved. Under a new rating system from the Missouri Department of Elementary and Secondary Education, 38 schools in St. Louis performed well enough to be considered fully accredited. Thirteen are charters.

A 2014 study commissioned in part by the Regional Business Council found that the number of seats in quality district and charter schools has doubled since 2008, giving more parents reason to stay in the city.

St. Louis Superintendent Kelvin Adams helped those numbers by opening the selective Collegiate School of Medicine and Bioscience, adding rigorous enrollment requirements to a number of magnet schools, and increasing the number of gifted seats at schools throughout the district.

On the charter side, the worst-performing schools have closed. Slay has now endorsed about 30 charters since 2006 through a rigorous application process designed to attract high quality schools and stop bad ones from opening.

That said, 19,000 children in the city — about 60 percent of those enrolled in public schools — still lack access to schools that meet state standards, the study found. Most of those children are concentrated in six ZIP codes in extreme north and south St. Louis.

Several of the schools opening this fall will operate north of Delmar Boulevard.

Hawthorn Leadership School for Girls will open on North Kingshighway. KIPP Triumph Academy middle school will open in the KIPP Victory building on Arcade Avenue. KIPP Wisdom elementary is still working on a location. LaSalle Middle School will keep its site in the Ville where it will convert to a public school from a Catholic one.

The Biome, an elementary school focused on science, math and arts education, will have a more central location with a building in the Central West End.

All schools will open with one or two grade levels, adding a grade each year until they reach capacity.

At the admissions fair, Mark and Jamie McHale familiarized themselves with the growing list of charter schools. They are teachers in Rockwood School District, but they want their children to attend school in the city where they live.

Though charters still have challenges — some with performance and funding — the McHales see them as the best option.

CHARTER SCHOOL GROWTH BY THE NUMBERS

34 Number of charter school campuses expected to be open in the city this fall.

Eight charter school campuses are opening are slated to open this fall, but not all have yet secured a building. A list:

Case deals with arrangement similar to one the company had with charters schools St. Louis.

Plenty of talk, scarcity of answers when it comes to school choice in Missouri

Students say picking schools that worked for them was critical; skeptics say other students were left behind to fail.

Proposal by St. Louis Public Schools Superintendent Kelvin Adams is part of a move away from traditional high schools.

One of St. Louis' first charter schools shutting its doors after years of declining enrollment and academics

The charter elementary school has operated out of Christ Church Cathedral in downtown since 2013.

The charter school's intent is to empower girls and equip more of them to enter into STEM careers.

The Missouri Board of Education approves Tessera Hall Academy, which will become the city's second all-girls charter school.

Teachers at the charter school are one step closer to collective bargaining.

Partnership with a private school is helping to lower costs and provide assistance to students with disabilities.

St. Louis Public Schools is collaborating with KIPP to open a charter school in the old Mitchell School in the West End.

Enrollment, performance up in St. Louis district and charter schools

Study shows that parents are responding by enrolling their children and reversing a decades-old exodus.

The Post-Dispatch has made it easier to compare the region's schools with a number of interactive tools.

Louie, the St. Louis Blues mascot, meets Uriah O'Kelley, 5, as he and his mother Cora O'Kelley looked at St. Louis charter school options at a student recruitment fair held Saturday, Jan. 24, 2015 at Scottrade Center. "If you don't have a good start, it's a hard road," said his mother. Photo by Robert Cohen, rcohen@post-dispatch.com