Cellphone policies a 'work in progress' as St. Louis area schools try to balance learning and technology
0 comments
Share this
Subscribe for $1 a month
1 of 3 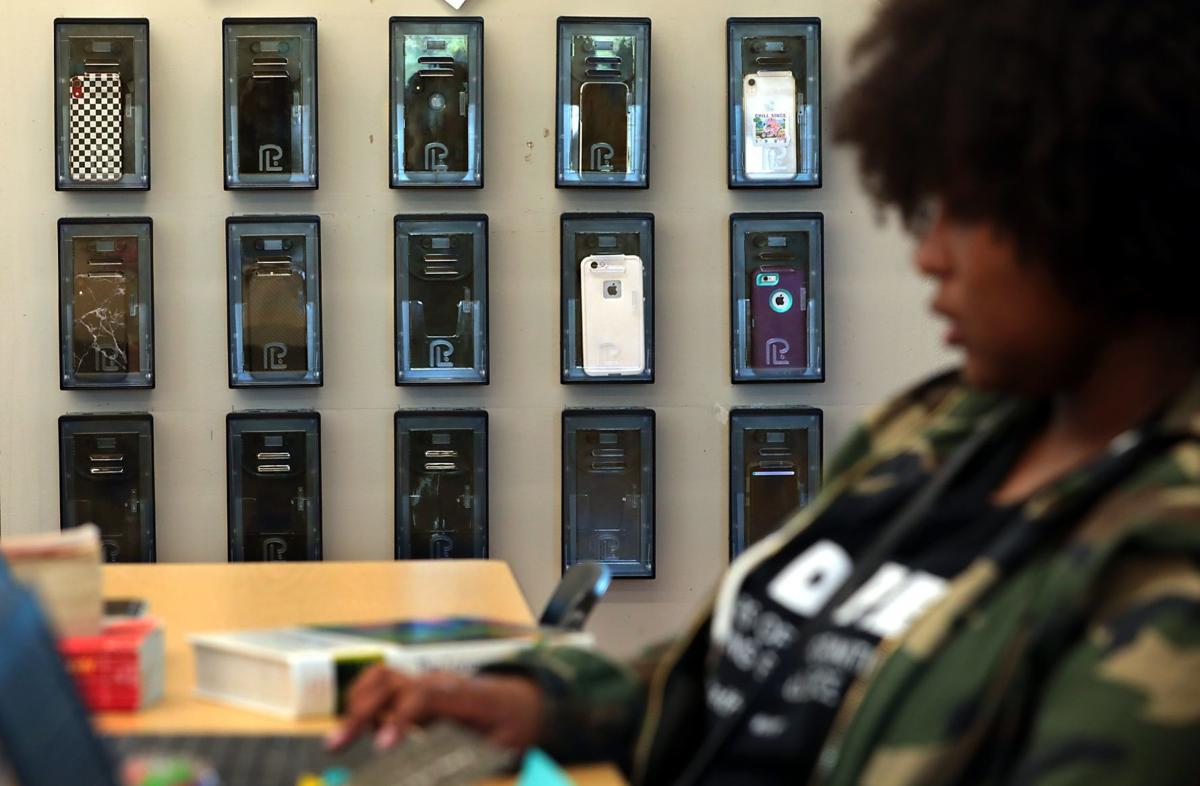 Cellphones locked electronically on a wall bank await pickup as University City High students in AP language class finish assignments on Thursday, Sept. 19, 2019. The school is analyzing whether locking up the student phones during class helps with engagement in discussion groups and comprehension. Photo by Robert Cohen, rcohen@post-dispatch.com. 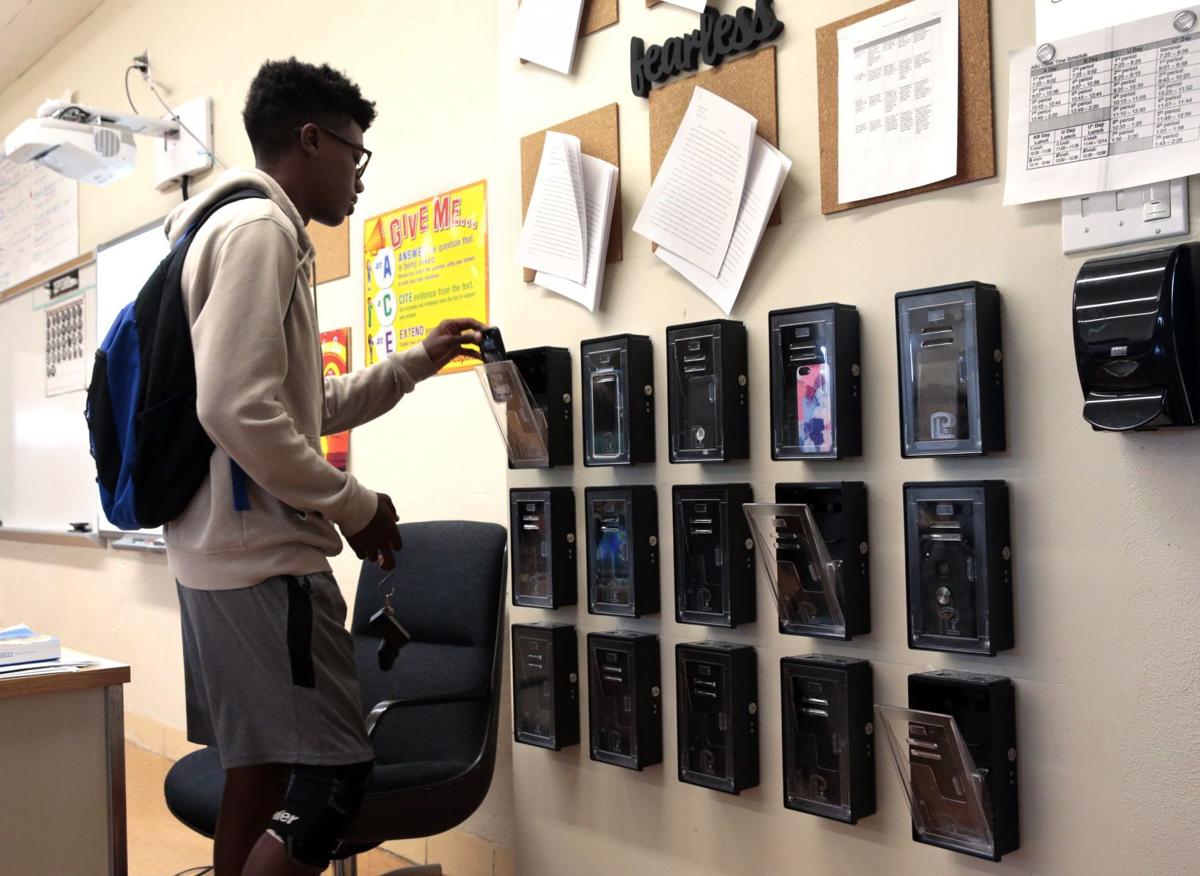 University City High junior Kenwyn Jones locks his cell phone at the beginning of AP language class on Thursday, Sept. 19, 2019. The school is analyzing whether locking up student phones during class helps with engagement in discussion and comprehension. Photo by Robert Cohen, rcohen@post-dispatch.com. 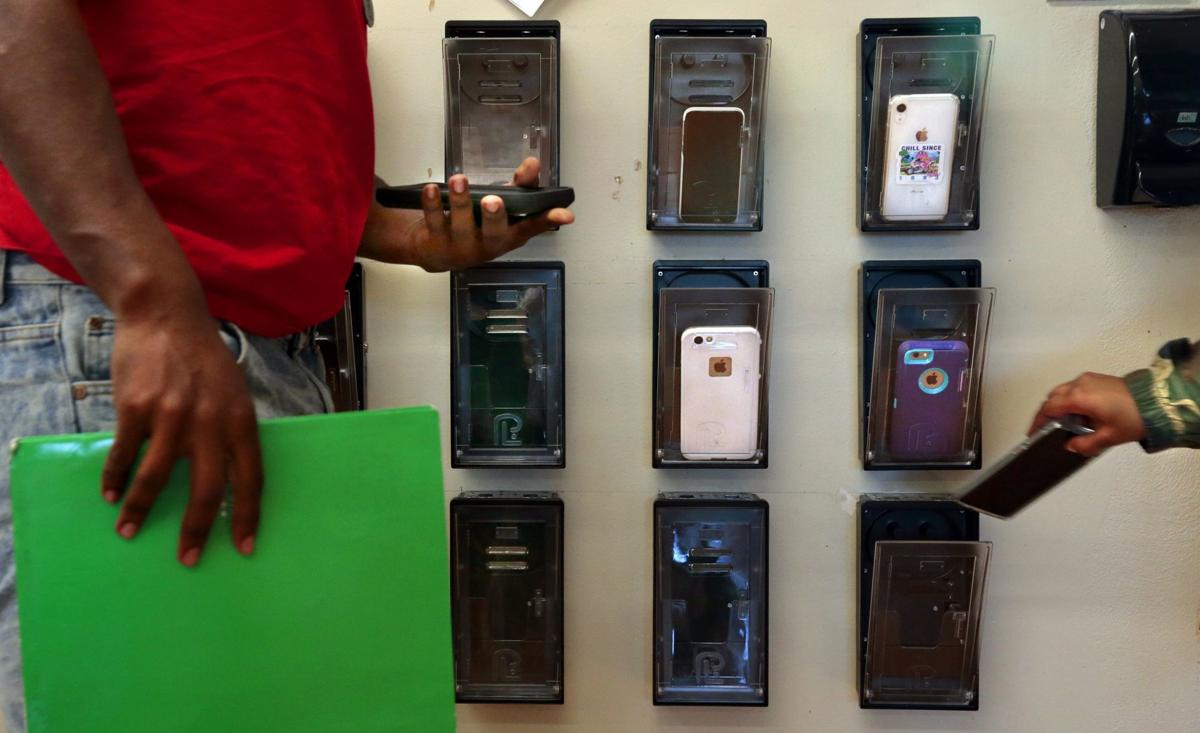 University City High students in their AP language class pick up their cell phones after teacher Christina Sneed unlocked them with the push of a remote button following class on Thursday, Sept. 19, 2019. The school is analyzing whether locking up student phones during class helps with engagement in discussion groups and comprehension. Photo by Robert Cohen, rcohen@post-dispatch.com.

His students at Hazelwood East High School could not stop looking at their phones, even if they were in their backpacks or pockets. The lure of the beep or the buzz was too strong.

In 2017, Henricks taped a box to each of the seven tables in his classroom for students to put away their phones during class time.

“If they cannot touch their phone, they don’t think about it that much,” Henricks said. After a year and a half of using the boxes, students’ grades went up, and discipline actions went down. “My students did a 180. I had their attention.”

Along with two engineers, Henricks started a company and developed a more high-tech version of his box. This fall, University City High School became the first school to purchase and install the Phone Locker.

About 80% of U.S. schools have some type of cellphone policy, according to a national survey of 1,200 teachers released earlier this year by the nonprofit Common Sense Media. But as more students carry their own phones, the percentage of school districts with total bans has dropped from more than 90% in 2010 to about 66% in 2016, according to the National Center for Education Statistics.

Cellphone policies have been a “work in progress,” said Trisha Crenshaw, associate principal for student affairs at Nerinx Hall. This year, the all-girls Catholic high school loosened its rules when it found students were sneaking onto their phones in class under a total ban during school hours. Teachers’ class time increasingly was spent scolding students caught with their phones.

Now students can use their phones before school, after school, in a 9:40 to 10:15 a.m. activity time and in the cafeteria during lunch.

There have been fewer detentions this year because of cellphone violations, Crenshaw said. Students have been happier with the increased access to phones.

“We want to protect the academic time but also have balance,” she said.

Aside from the discipline issue, cellphone rules have been in flux because parents want to be able to contact their children at all times. School officials don’t want to be held liable for confiscated phones. And some classes have incorporated phone apps into their lessons, like making movies or tracking homework.

A decadelong ban on cellphones was lifted in 2015 for New York City’s 1.1 million public school students. The ban had been unevenly enforced, with punishment more likely for students in schools with metal detectors. Now principals can determine their own policies.

Still, some schools are moving the other way. In the last few years, middle schools in Highland and Collinsville banned cellphone use on campus. The U46 School District in Chicago’s northwest suburbs instituted a ban on cellphones this year and installed $15 phone holders in 1,000 classrooms.

Under a new rule this year at Westminster Christian Academy in Town and Country, students are allowed to carry phones but cannot turn them on during school hours.

Barrett Mosbacker, Westminster’s head of school, said the difficulty in enforcing a cellphone ban should not be a reason to drop it.

There were three reasons for enacting the new ban, Mosbacker said — to encourage deep thinking in classrooms with minimal distractions, to promote personal connections and to help students develop healthy relationships with technology.

The response has been overwhelmingly positive, at least from teachers and parents, Mosbacker said. Students are less enthralled with the ban, he said, but understand the benefits.

“When I walk in the cafe now, they’re talking, laughing, playing cards and board games,” Mosbacker said. “The entire school culture has been elevated and is much more positive.”

As more schools outfit their students with laptops or tablets, the academic argument for cellphones in class has weakened. Research showed college students whose cellphones were taken away performed better on a test compared to those who could use or keep their cellphones, according to a 2017 study in the journal Applied Cognitive Psychology. Another study found that overall cellphone use, not just while in school, corresponded to lower grade-point averages.

Before the lockers were installed at University City High, cellphone use in class was the leading complaint from teachers. This year, student discipline referrals by mid-September dropped to 29 from 188.

The University City School District paid Henricks’ company Jordiam LLC $40,000 to install 250 devices in 13 classrooms. The money came from a $400,000 federal grant to the high school to improve academic outcomes. The school also will collect data to try to determine whether the lockers make a difference on test scores and grades. English and math classrooms were prioritized, because those subjects are part of most standardized tests. If the pilot project is successful, the school hopes to expand the lockers to every classroom.

English teacher Christina Sneed said that before the lockers, she tried to collect students’ phones in a desk drawer during class. But students worried the phones would get cracked, mixed up or stolen and often wouldn’t turn them in.

“Last year it was a tug of war, a power struggle with students who aren’t able to regulate their actions,” Sneed said.

Now, Sneed can control the individual lockers by remote control. Students know their phones are safe, and they’re better able to concentrate, she said.

Tiffanie Thomas, whose son is a sophomore at University City High, bought him an iPhone this year so they could stay in touch about after-school activities. Her main concern with the phone was about the potential distraction in class.

“He’s an easily distracted kid, and with the cell phone locker I really think it’s helping,” she said.

Principal Mike Peoples said he also hopes the cellphone lockers help students develop their “soft skills” — making eye contact, and having face to face conversations and meaningful interactions with other students and staff.

Last year, sophomore Victoria Trice perked up every time she heard her phone vibrate in her backpack. The cellphone lockers have helped break that automatic response, she said.

“Now I don’t know if I get any alerts, so I just focus on my work.”

One exception was a hotly contested $70 million bond issue to build a new elementary school and ease crowding in the Kirkwood School District.

Public education in the U.S. has shrunk to a shell of its former self, with teacher instruction, grading, attendance, special education and meal services for hungry children slashed back or gutted altogether.

Families, teachers scramble to find new schools after closures during the coronavirus pandemic

Of 387 students at Carondelet Leadership Academy, 340 have not enrolled in new schools.

Missouri schools prepare for online learning in the fall, while cases of mystery inflammatory syndrome pop up in St. Louis

The Archdiocese of St. Louis said a financial analysis found the schools to be unsustainable

Reading, writing and separation: How coronavirus could change Missouri schools when they reopen

The report recommends canceling or reorganizing sports, extracurricular activities and before- and after-school programs.

Washington University was also sued this month over tuition charges.

Cellphones locked electronically on a wall bank await pickup as University City High students in AP language class finish assignments on Thursday, Sept. 19, 2019. The school is analyzing whether locking up the student phones during class helps with engagement in discussion groups and comprehension. Photo by Robert Cohen, rcohen@post-dispatch.com.

University City High junior Kenwyn Jones locks his cell phone at the beginning of AP language class on Thursday, Sept. 19, 2019. The school is analyzing whether locking up student phones during class helps with engagement in discussion and comprehension. Photo by Robert Cohen, rcohen@post-dispatch.com.

University City High students in their AP language class pick up their cell phones after teacher Christina Sneed unlocked them with the push of a remote button following class on Thursday, Sept. 19, 2019. The school is analyzing whether locking up student phones during class helps with engagement in discussion groups and comprehension. Photo by Robert Cohen, rcohen@post-dispatch.com.