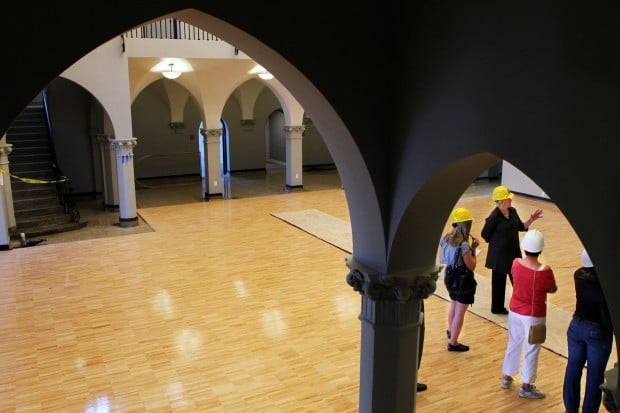 July 6, 2011--- Principal Lynne Glickert leads a tour for the media at the new Grand Center Arts Academy in St. Louis. The school will be located in the old Beaux Arts Building and Pythius Hall on Grand Avenue. The buildings have been largely vacant for more than two decades. The charter school opened last year in the Third Baptist Church and is the city's second performing arts school. Emily Rasinski erasinski@post-dispatch.com 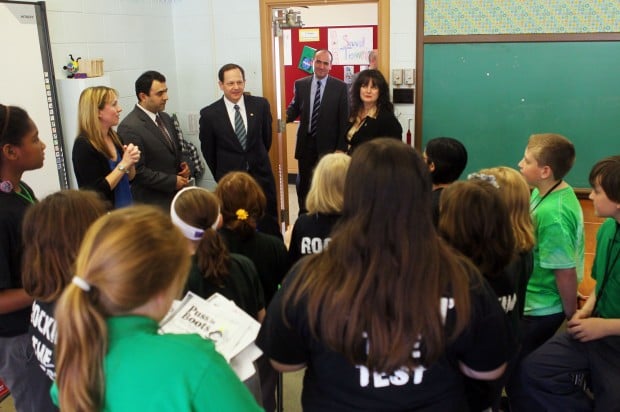 ST. LOUIS • More charter schools are outperforming the city’s struggling school system than ever before, but huge achievement gaps persist among the top- and lowest-achieving charters, according to 2011 Missouri test score data.

The numbers continue to show that charter schools — promoted as an alternative to the struggling St. Louis Public Schools — have yet to consistently offer superior results for the nearly 10,000 children who attend them. At the lowest-performing charter schools, pupils are six times less likely to pass exams than their peers at the city’s traditional public schools.

And yet, the latest batch of data suggest that some are improving.

Preliminary figures released this month show that students in about one-third of 18 charter schools that took state tests passed English and math at greater rates than children in St. Louis Public Schools.

“We’re seeing that we have charters now that are doing a great job of moving students out of that below-basic or basic level,” said Doug Thaman, executive director of the Missouri Charter Public School Association. “Do I think we have a lot of work to do? We have a lot of issues to continue to address.”

The data from the Missouri Assessment Program provide a snapshot of how well students from the third grade through high school grasp certain subjects. The passing rates don’t tell the whole story, such as the rate of improvement in a classroom where pupils start the school year two grade levels behind. But they indicate the number of public school students performing at or above grade level.

While charter schools in St. Louis as a whole have made gains, the vast majority of the students who attend them continue to fail the state’s reading and math exams.

The degree to which their schools are performing varies widely. In fact, a 61 percentage-point difference exists between the best- and the worst-performing charter schools in reading, and 52 percentage points in math.

“It’s a tale of two different kinds of charter schools,” said Robbyn Wahby, education liaison for Mayor Francis Slay. “We have schools that are improving and performing, and we have schools that haven’t moved the needle in years.”

Since opening in 2000, charter schools in St. Louis have fallen short of the expectations of many policy leaders. Some have closed after years of academic failure and mismanagement.

In 2007, Slay began taking a more direct role in the charter school movement, offering to support and groom schools that his office believes have greater potential for success. The latest test data suggest that a few of the schools that won Slay’s endorsement are now showing promise.

KIPP Inspire, for example, a school with fifth and sixth grades last school year, improved about 9 percentage points in math from 2010, with 43.6 percent of pupils passing the exam. And Grand Center Arts Academy, which took root in the city’s arts district in 2010, finished with 38.5 percent passing the reading — 5 percentage points better than the school system’s scores.

One school that pre-dates Slay’s involvement — St. Louis Charter School, a south city elementary and middle school — has risen from single-digit passing rates 10 years ago to 37.5 percent in math and 39.1 percent in reading this year.

“There’s still a lot of work to do as a school,” she said.

Charter schools have had more success in Kansas City, where half of them this year performed better in math than the city’s school district, and almost a quarter posted better passing rates in that subject than the state.

Curt Fuchs, coordinator of Educational Support Services at the Missouri Department of Elementary and Secondary Education, gave St. Louis charters a mixed review last week as he looked at a chart comparing their achievement levels.

“We have some wonderful opportunities here,” Fuchs said. “We have some schools that are performing really well. Then we have what we refer to as ‘continuous concerns’ in terms of performance.”

Pointing to the schools performing worse than the city’s public school system, he said, “Kids are being deprived here.”

At Carondelet Leadership Academy, which opened in 2010 with kindergarten through fifth grade, and with Slay’s endorsement, 14.3 percent of students passed English and 18.2 percent passed math.

Patrice Coffin, principal of Carondelet Leadership, said the south St. Louis school opened with children from different educational backgrounds. Some students, she said, were more than two grade levels behind where they should have been.

“We moved a lot of these kids well beyond one grade level,” she said.

Also at the bottom of the pack are six schools operated by Virginia-based Imagine Schools Inc., the largest for-profit charter operator in the country. In the 2010-11 school year, more than 3,000 children attended its schools in St. Louis.

Just 4 percent of pupils at Imagine Academy of Careers Elementary in the south part of the city passed the state math exam. And just 5.4 percent at downtown’s Imagine Academy of Cultural Arts — touted as Imagine’s gifted program for pupils in kindergarten through fifth grade — tested proficient or advanced in reading.

During the last school year, the Missouri education department sent a memo to sponsors of underperforming charter schools — including Imagine’s — urging them do more to raise achievement levels. A sponsor is typically a college or university charged with holding a charter school accountable.

Missouri Baptist University, which oversees the Imagine schools, began meeting with heads of schools this summer about plans to improve.

“If the schools do not improve, we have no choice but to say we cannot be responsible for sponsoring you,” said John Jackson, charter school liaison for the university. “Missouri Baptist is one of the few universities that has pulled the plug on a school because of financial issues. We’re an organization that’s true to our word.”

The university last year revoked its sponsorship of Ethel Hedgeman Lyle Academy because of financial mismanagement.

As for a time frame for improvement at Imagine schools, Jackson was uncertain. Every two years, the university evaluates the schools, he said.

This week, the Missouri Board of Education plans to discuss a proposed rule that, among other things, would require a charter school sponsor to revoke sponsorship or place a school on probation if the school failed to meet certain standards, including comparable performance to its respective school district. Charter schools must have a sponsor to operate.

In St. Louis and elsewhere, charter schools are called underperforming if they do worse than their respective school districts.

For the fourth year in a row, test scores in St. Louis Public Schools improved in 2011, with 33.1 percent of students passing English and 30.9 percent passing math. And when a school-by-school comparison is made, several city magnet schools — Metro Academic & Classical High School, McKinley Classical Leadership Academy and Kennard Classical Junior Academy — continue to rank as the best schools in the city, and among the top in the state.

And yet, a handful of city schools still rank with the Imagine schools as some of the lowest-performing in St. Louis. Superintendent Kelvin Adams vowed earlier this year to close failing schools in his district that aren’t improving.

And that’s where he and Wahby, of Slay’s office, see eye-to-eye.

Finalized budget numbers and student registrations for the new year gave administrators a better idea of how many teachers they could rehire.

Numbers based on preliminary data; districts can appeal scores.

Parents at Mallinckrodt are praising their child's progress in reading and writing.

2 Imagine charter schools in St. Louis to close at end of school year

The move likely means more than 3,500 students in the city will be looking for new schools before fall.

SpearIt (his professional name) and his wife, Vishakha, moved to St. Louis a little more than a year ago after a decade in California. They ha…

Group that has built more than 100 homes in neighborhood takes on educational task.

July 6, 2011--- Principal Lynne Glickert leads a tour for the media at the new Grand Center Arts Academy in St. Louis. The school will be located in the old Beaux Arts Building and Pythius Hall on Grand Avenue. The buildings have been largely vacant for more than two decades. The charter school opened last year in the Third Baptist Church and is the city's second performing arts school. Emily Rasinski erasinski@post-dispatch.com