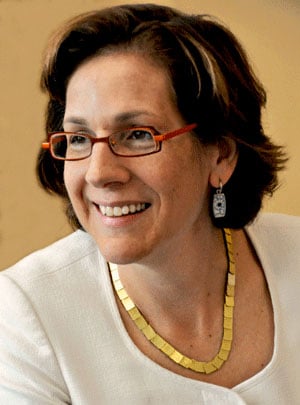 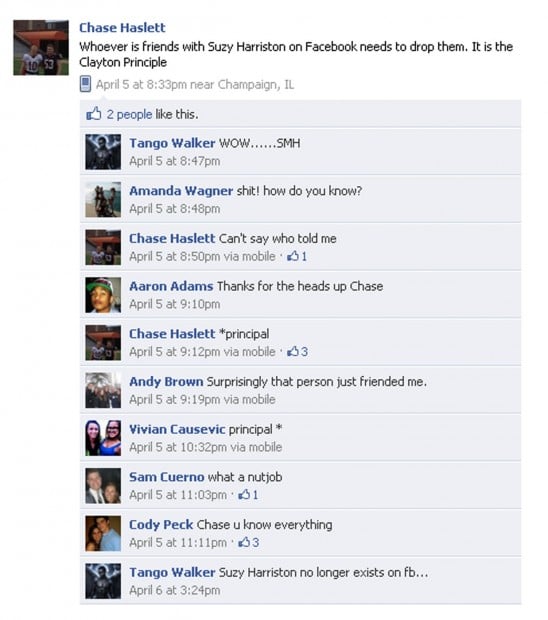 CLAYTON • Suzy Harriston wanted to be friends on Facebook.

No one seemed to question who Harriston was. That is, until the night of April 5, when a 2011 grad and former Clayton quarterback posted a public accusation.

"Whoever is friends with Suzy Harriston on Facebook needs to drop them. It is the Clayton Principal," wrote Chase Haslett.

And then, Suzy Harriston disappeared, say those who saw the profile.

The timing of the profile vanishing has had some at Clayton High School wondering: Did Suzy Harriston actually exist? Was it a fake profile? Did someone set it up to see what students and parents were up to on Facebook?

The day after Haslett's allegation, the district announced that the high school principal, Louise Losos, would begin a leave of absence the following Monday.

For weeks, the district released no details about the leave. Then on Friday night, Losos resigned.

The resignation is effective June 30. The district said the administration and Losos "had a fundamental dispute concerning the appropriate use of social media."

Until then, the district had released few details about the leave of absence, and had said they were uncertain how long it would last.

In the four weeks that followed the start of Losos' leave, the district released no further information and would not say whether it was related to the Suzy Harriston allegation. School Board President Jane Klamer and other members also were silent.

That changed with a special closed School Board meeting on Friday, followed by the announcement of Losos' resignation.

Chris Tennill, spokesman for Clayton, said the district would not elaborate on the nature of Losos' social media activity or connect it to the Suzy Harriston Facebook profile.

The picture posted with the Suzy Harriston Facebook profile was nondescript — a group of penguins.

An email from a reporter sent last week to the address listed on Suzy Harriston's profile was not returned, and a search of public records in Missouri found no results for anyone named "Suzy Harriston."

The district confirmed that no student by the name of Suzy Harriston was enrolled at the high school in the last two years.

The post accusing Suzy Harriston of being the principal is tied to another controversy at Clayton High.

Haslett wrote the post on a page created in support of Sam Horrell, who was fired last year as high school football coach. At that time, Losos and Athletic Director Bob Bone sent parents of Clayton football players a letter saying the firing was related to a violation of the Missouri State High School Activities Association by-laws, which regulate when and the circumstances of how high school coaches can contact middle school athletes.

An investigation by Clayton administrators found Horrell was "engaged in strength and conditioning workouts with ... students who attend Wydown Middle School," they said.

The firing brought out 250 students in support of Horrell in a demonstration last spring on the front lawn of the high school. Online, some people spoke against Losos and Bone on the Facebook group of more than 700 supporting Horrell.

On the afternoon of April 5, after a post about Horrell's loss of a teaching job, some of the more active members of the "Bring Back Coach Horrell" Facebook group received friend requests from Suzy Harriston. But Harriston's profile had already been up for probably a year.

Clayton High parent Andy Brown was among Horrell's supporters who received a friend request from Harriston. He has been a public supporter of Horrell and critic of Losos. Suzy Harriston had been Facebook friends with two of his children since May 2011, he said.

It was not the first time a mysterious Facebook profile had appeared. Last year, Brown wrote on the Horrell group's page that someone with the profile "Lola Lane" had made a comment, which was later deleted.  He suspected it was a fake name.

If administrators were monitoring students' Facebook activity without being truthful about their identity, that is a breach of trust, Brown said in an interview. As speculation built over the matter, Brown said parents had a right to know if the district was investigating the Suzy Harriston claim.

Haslett, who is the son of former St. Louis Rams interim head coach Jim Haslett, has not responded to requests for an interview. His post was removed Friday from Facebook before the resignation.

When contacted Friday afternoon before the closed School Board meeting, Losos, who has been principal since 2005, declined to provide an immediate comment on the matter.

Tennill had said repeatedly that it was "both a personal issue for Louise and a personnel matter." The district denied requests for related documents through Missouri's open records law, saying they are confidential personnel records. Losos will be paid through June.

She realized Suzy Harriston was one of her son's Facebook friends. She became more suspicious of the profile when she found no Suzy Harriston in the student directory.

"I told him, 'You need to defriend her,'" Walker said in an interview. "There has to be a moral or ethical issue there."

District will pay Clayton principal $140,000 as part of settlement

Search to find the average pay administrator and teachers make by school in Missouri's public school districts. You can search by school, by …

In February, the Clayton School Board passed its policy regarding electronic communication between students and staff.

Facebook's policy and standards ask that people use their real identities, saying it creates accountability and builds trust and safety for ev…