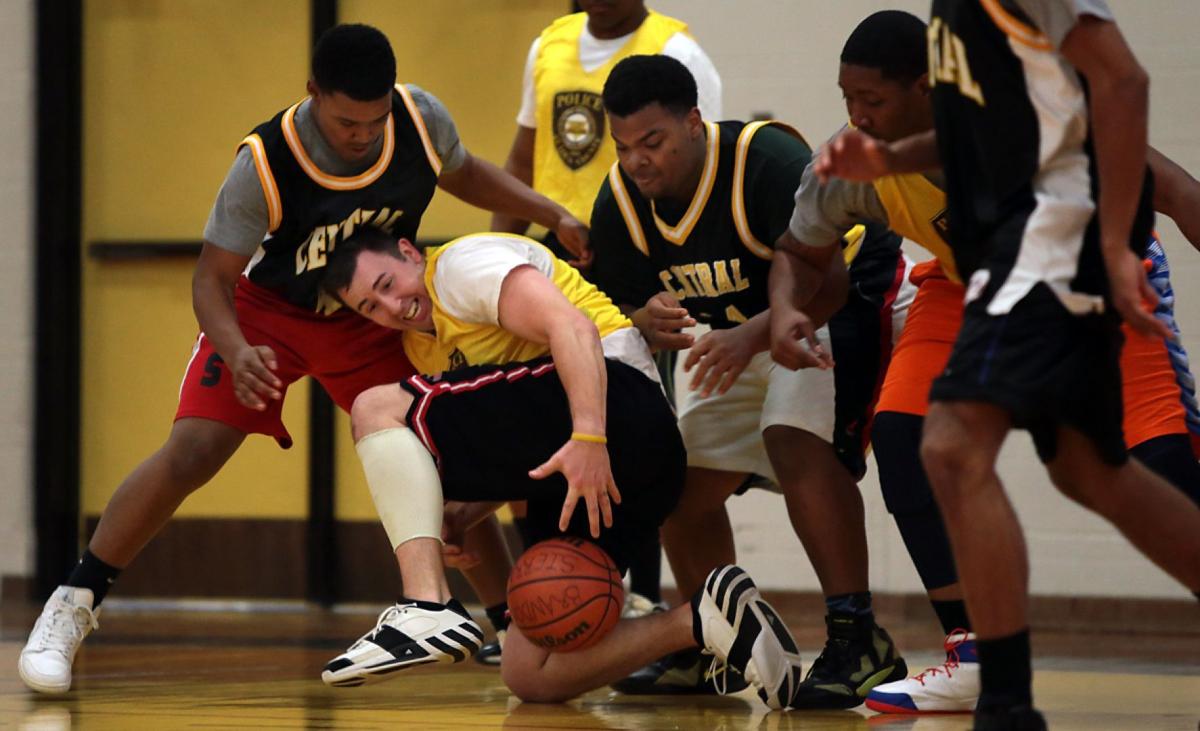 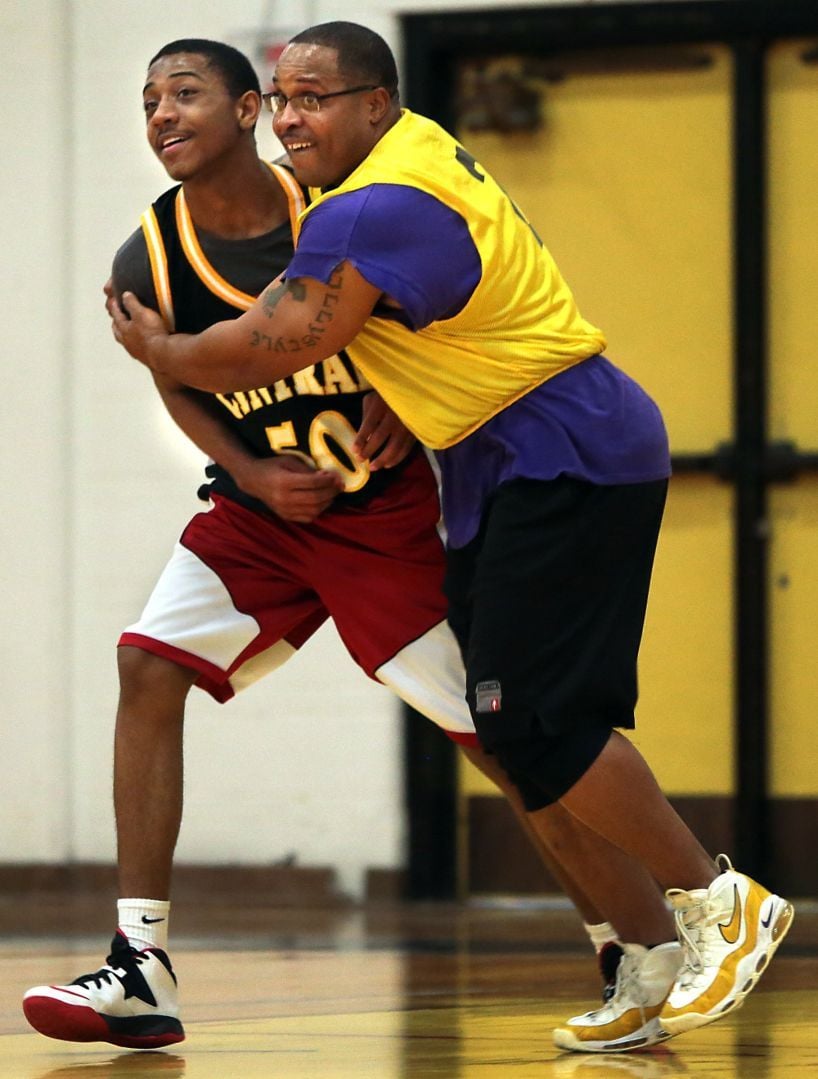 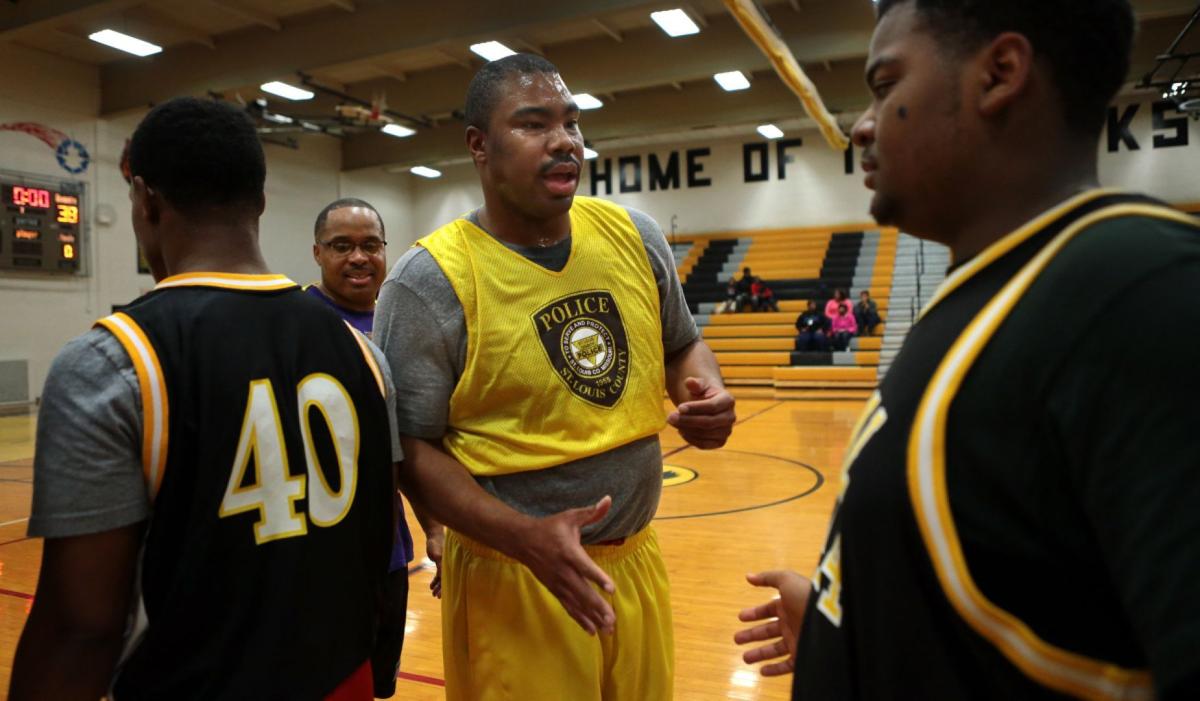 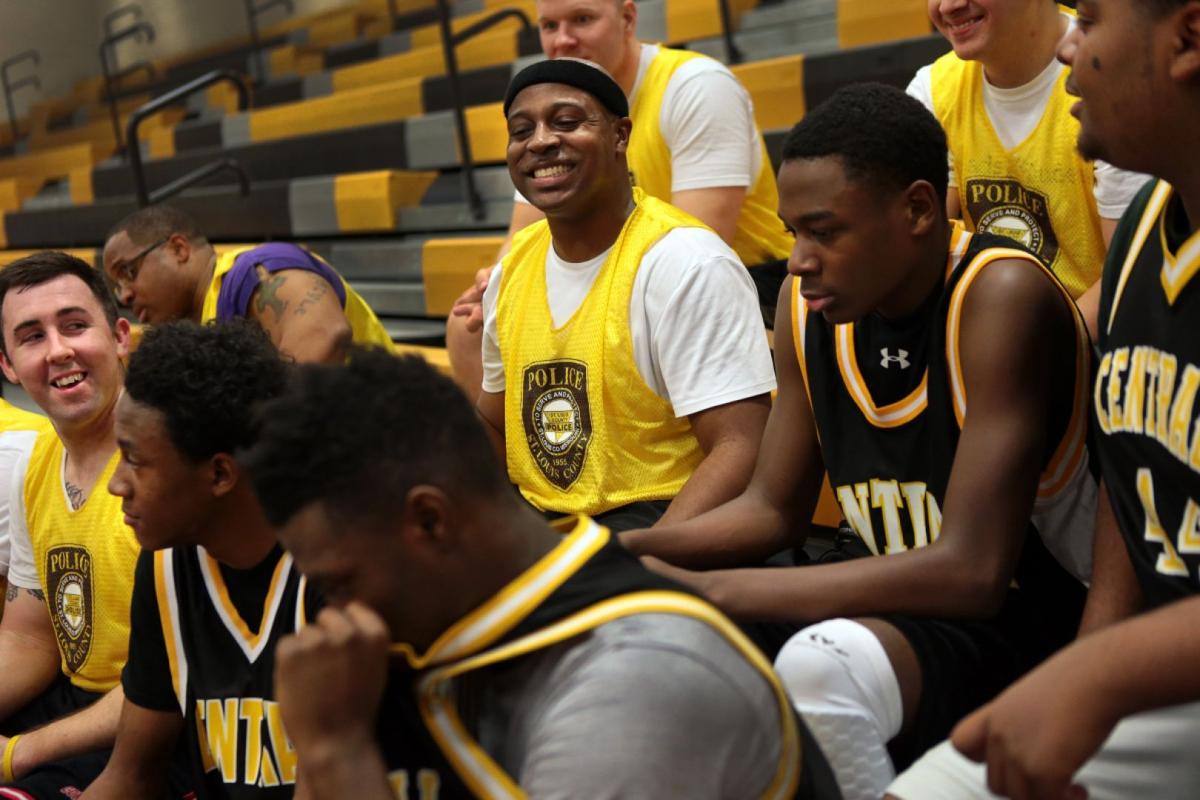 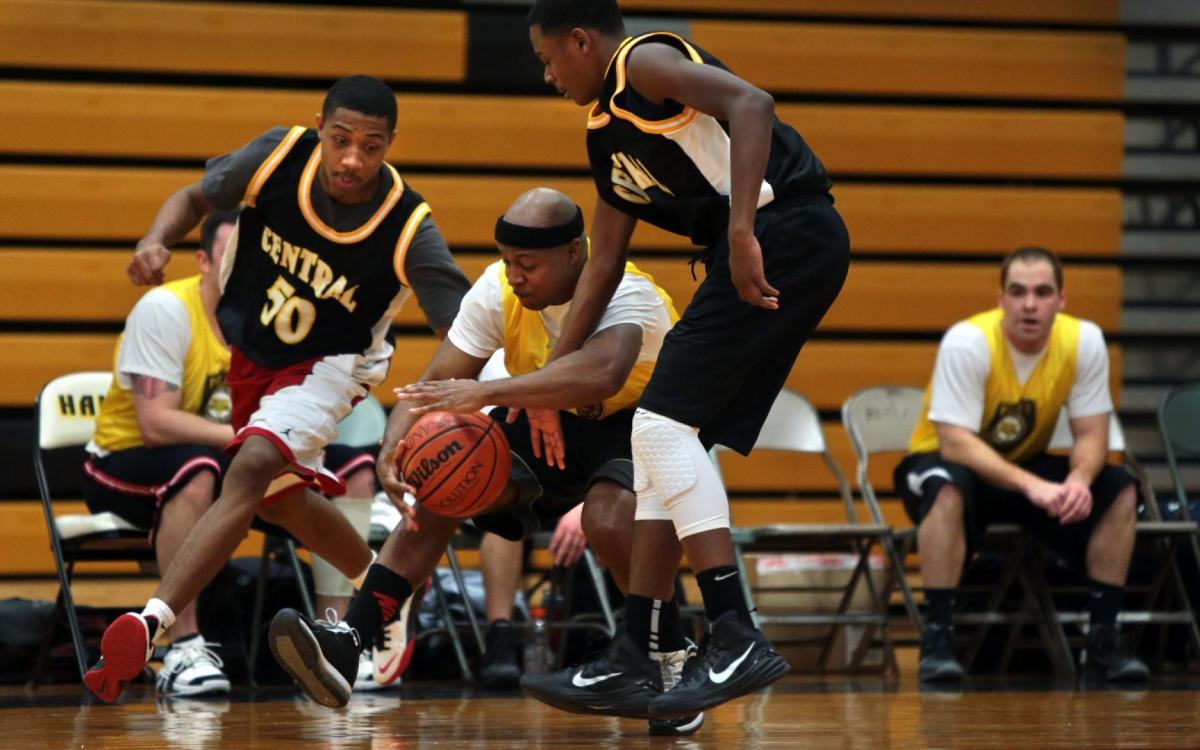 Instead, it was building trust among their opponents — a makeshift team of students — as part of an effort to defuse community tension after the fatal shooting of black teenager Michael Brown by a police officer in nearby Ferguson last summer.

“The bottom line is we care about your future,” Capt. Norman Mann, the north St. Louis County precinct commander, told the students as they and the officers gathered afterward for a joint photo.

“You’re our future leaders. We’re human, we make mistakes, but this is about positive interaction.”

Another officer, R. Johnson, then urged the students to sign up for a new Teen Academy educational program that the precinct is beginning soon.

The informal scrimmage, which the police won, 38-37, followed a similar contest between students and county police Jan. 16 at Hazelwood East High.

In November, the two schools were among several in North County where students walked out on their first day back to class after the announcement of a grand jury decision not to charge Darren Wilson, the white Ferguson policeman who said he had shot Brown in self-defense.

Things got tense during the walkout at East, where some students taunted county police officers who stood outside their cars. There were no arrests.

On Friday, the Central students who signed up to play the police team said they did so because they like basketball.

“It’s all about having fun and playing a game I love,” said Stonie Ingram, 17, a senior from Black Jack. “It’s more competition.”

Stonie, who was interviewed as he sat on the bench for a few minutes before being sent back into the game, said interacting with the police was a positive as well.

Deonte Hill, 16, a junior from North County, said that “I just like playing” but that “it’s pretty cool” that police officers had volunteered to be the opponents.

Jerrick Nance, 18, a senior from Black Jack, said he had taken part in protests after the Brown shooting. Asked by a reporter what he thought of police, he said: “I really don’t have any opinion on them as long as they do right.”

About 25 people — students and adults — were in the stands, including Derrick McGee, 16, a junior from Pine Lawn. He said that it was good for the police “to show they’re here to help us” and that “some people have a heart.”

Meanwhile, he complained that he had been stopped for no reason by police while walking down an alley in Pine Lawn a couple of months ago. He said they checked his pockets and let him go. “I was just walking through the ’hood,” he said.

At Friday’s scrimmage, the county police fielded a team of four white officers and four black officers, including Mann. He said the 50-50 split was coincidental.

All nine student players were black. Blacks make up about 70 percent of the student body at Central, said Grayling Tobias, the Hazelwood School District superintendent, who was on hand.

Mann said that when he was promoted to precinct commander last May, he wanted to begin some new community outreach and began talking with the Hazelwood district. He said he and Corey Johnson, Hazelwood East’s activities director, came up with the basketball idea.

“Ferguson definitely made it more of a need,” Mann said.

He said he and school officials decided to put on the first scrimmage at East because it was “one of the more emotional schools” during the walkouts.

“I saw a lot of anger in their hearts and minds,” Mann said of some of those in the East protest.

Mann said he planned to follow up with other athletic endeavors, perhaps having female officers from the precinct square off against female students in volleyball. Moreover, he said, maybe the police and the school district could set up some kind of educational competition.

He said he also hoped to expand the basketball and other outreach to the Riverview Gardens and Ferguson-Florissant districts.

Jerod Henderson, one of the county officers taking part Friday, said initiating positive contact was important for the future.

“That’s the generation coming up; they’re going to be the ones we interact with over the next 10 years,” he said.

Moline Acres police are handing out tickets for positive behavior.