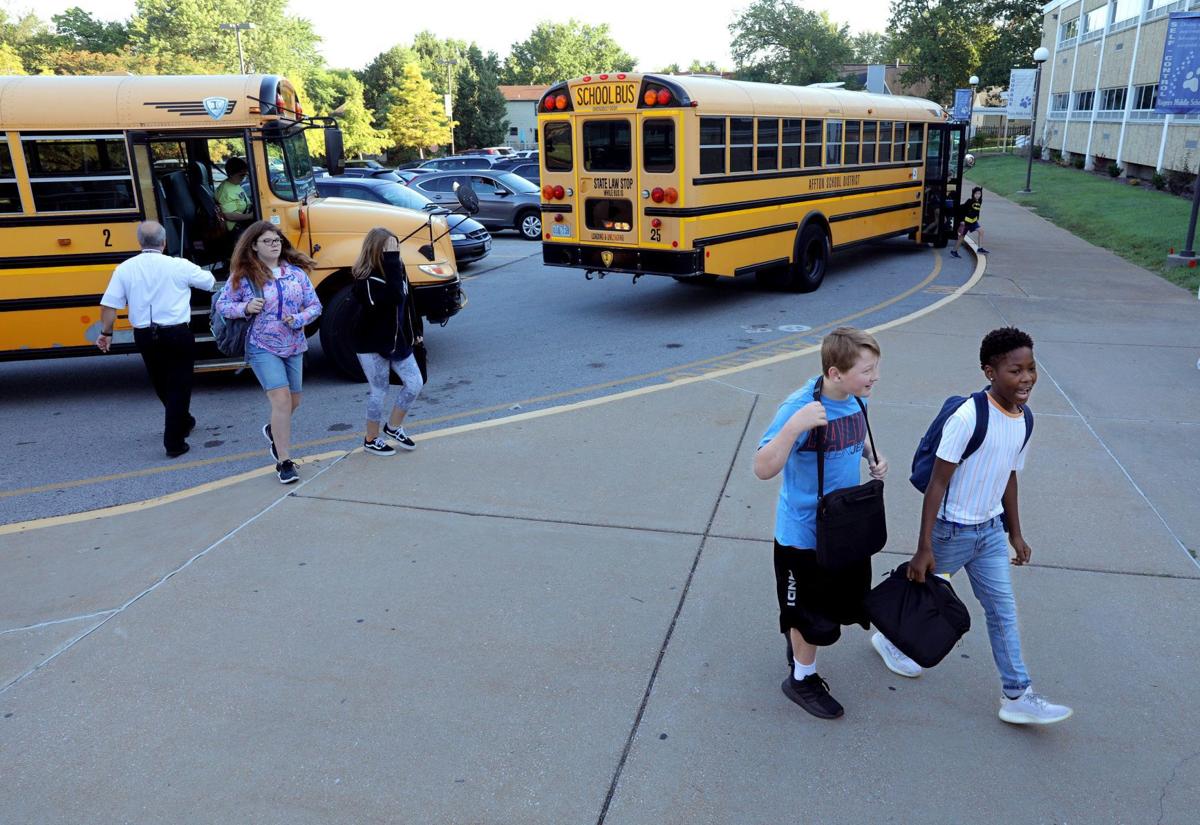 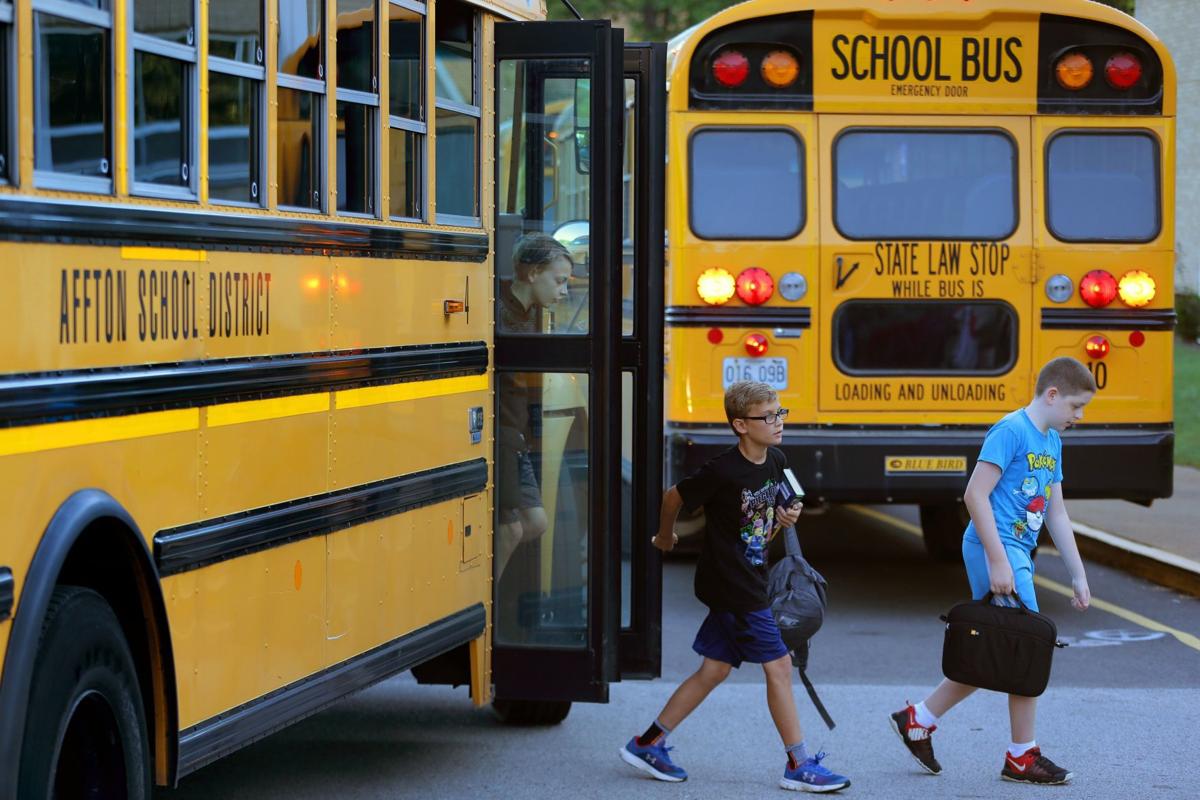 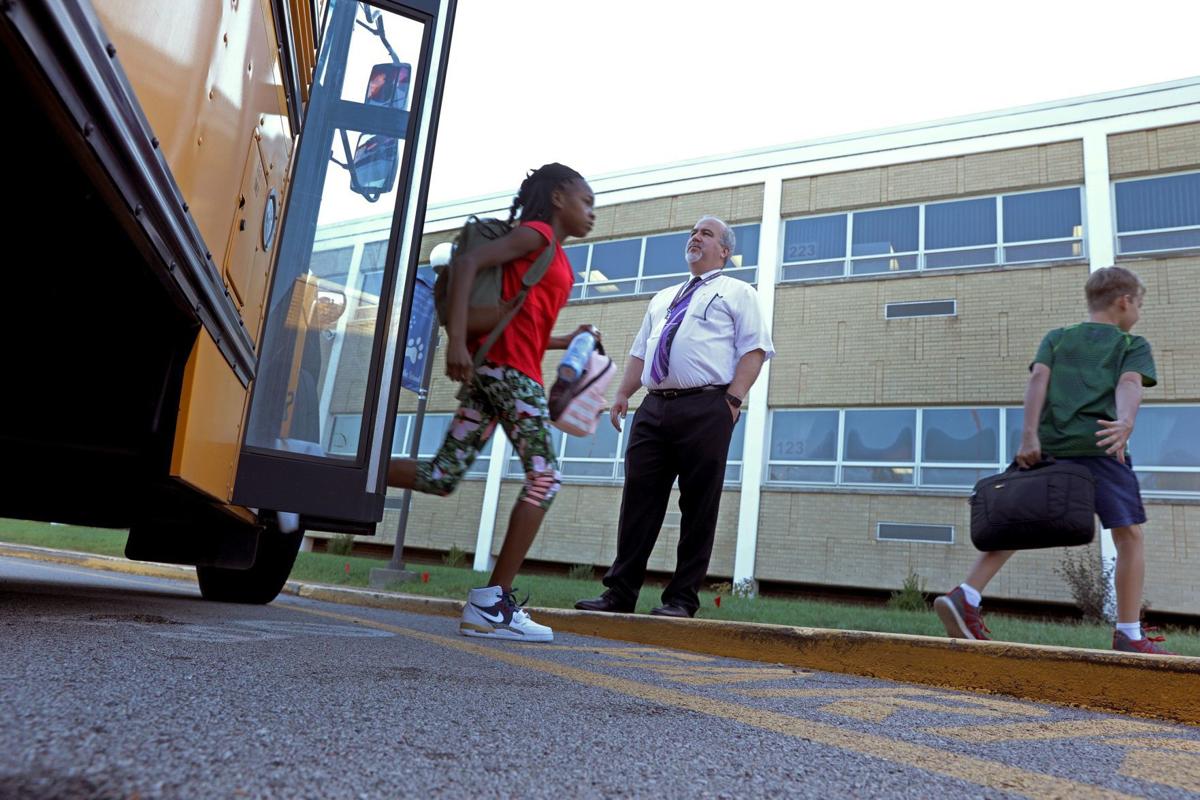 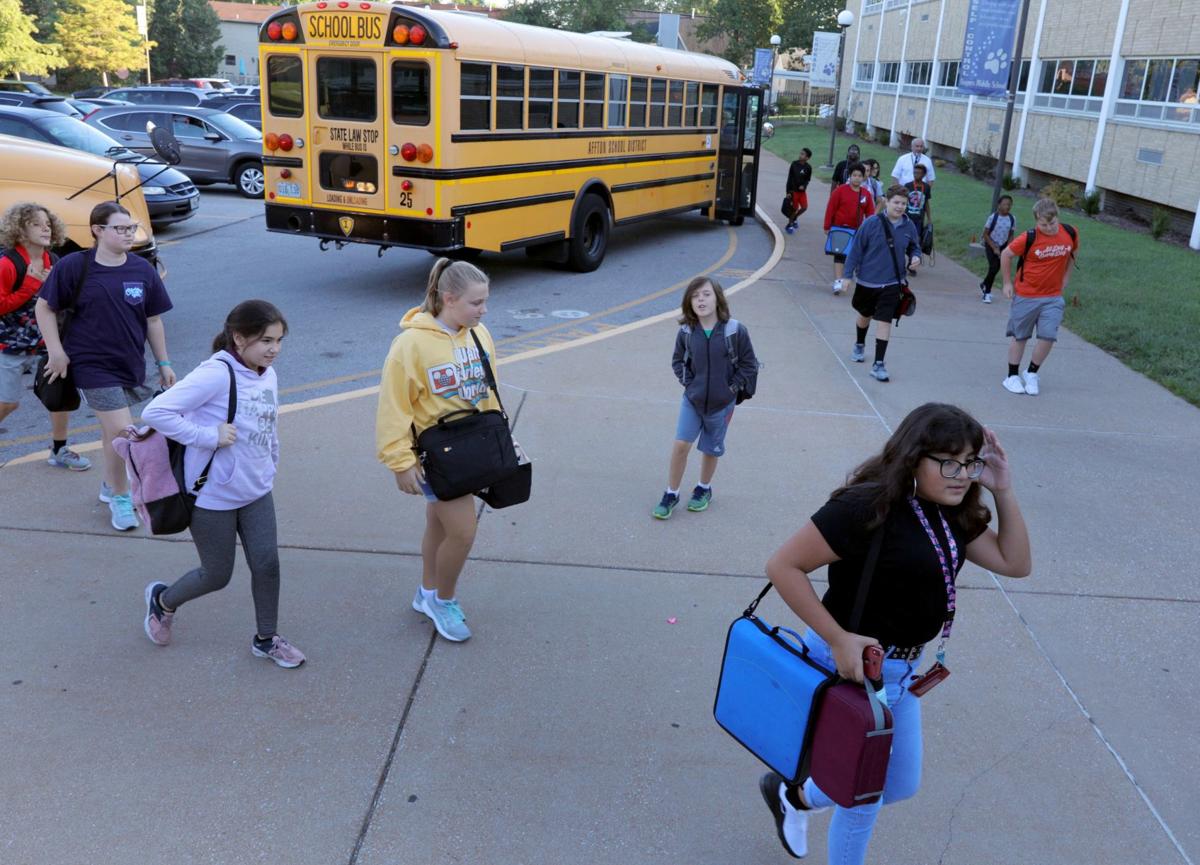 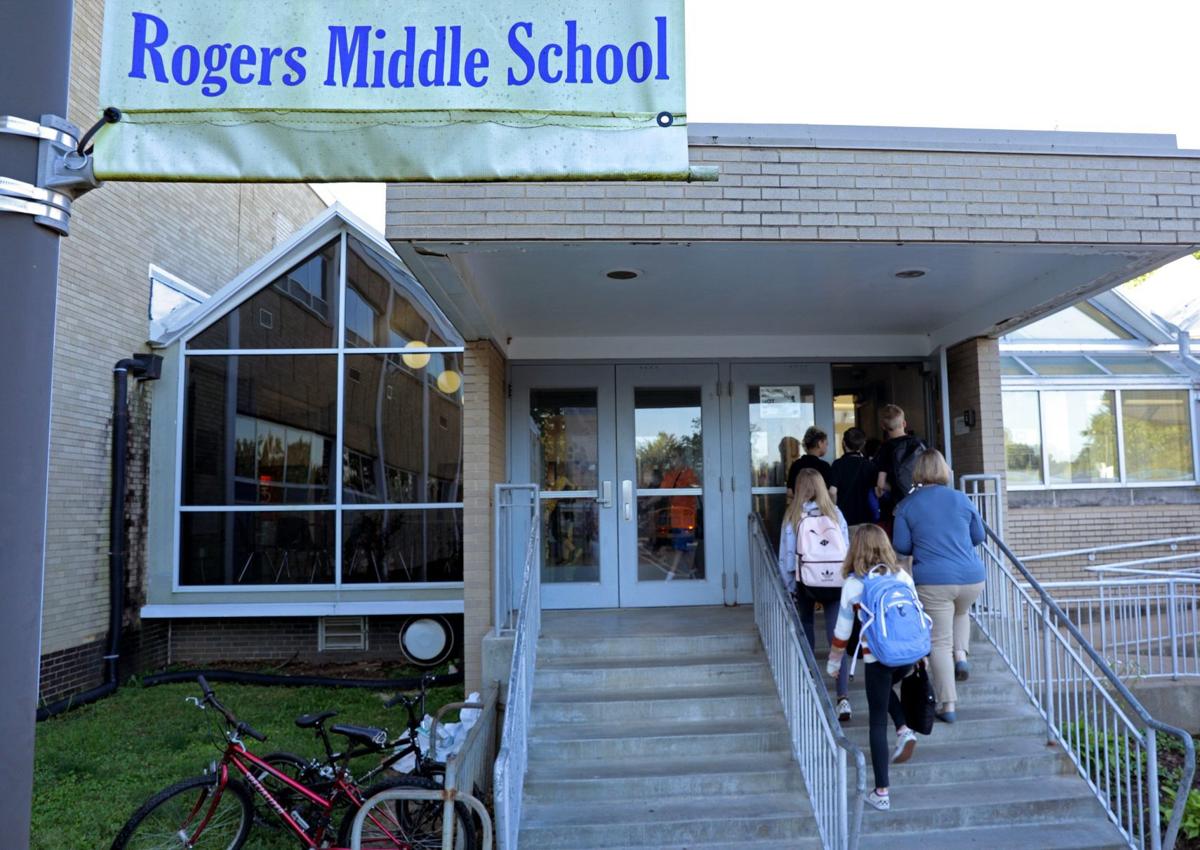 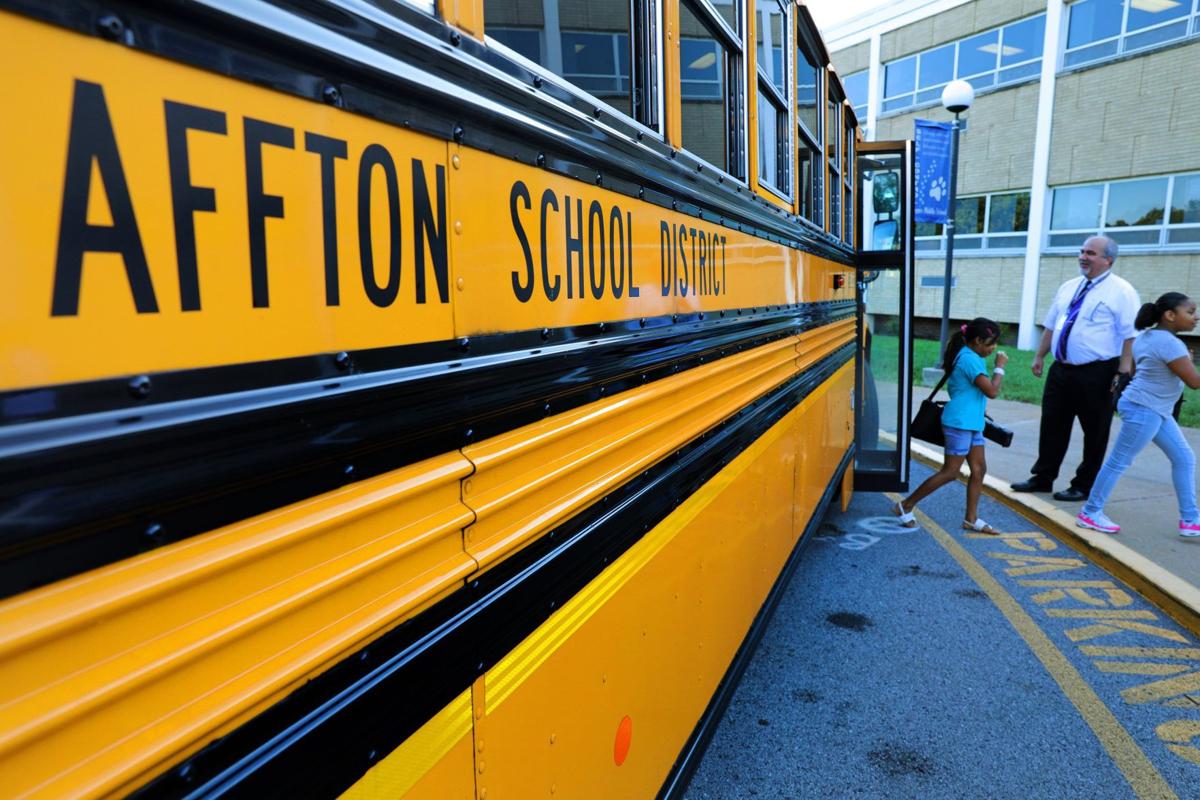 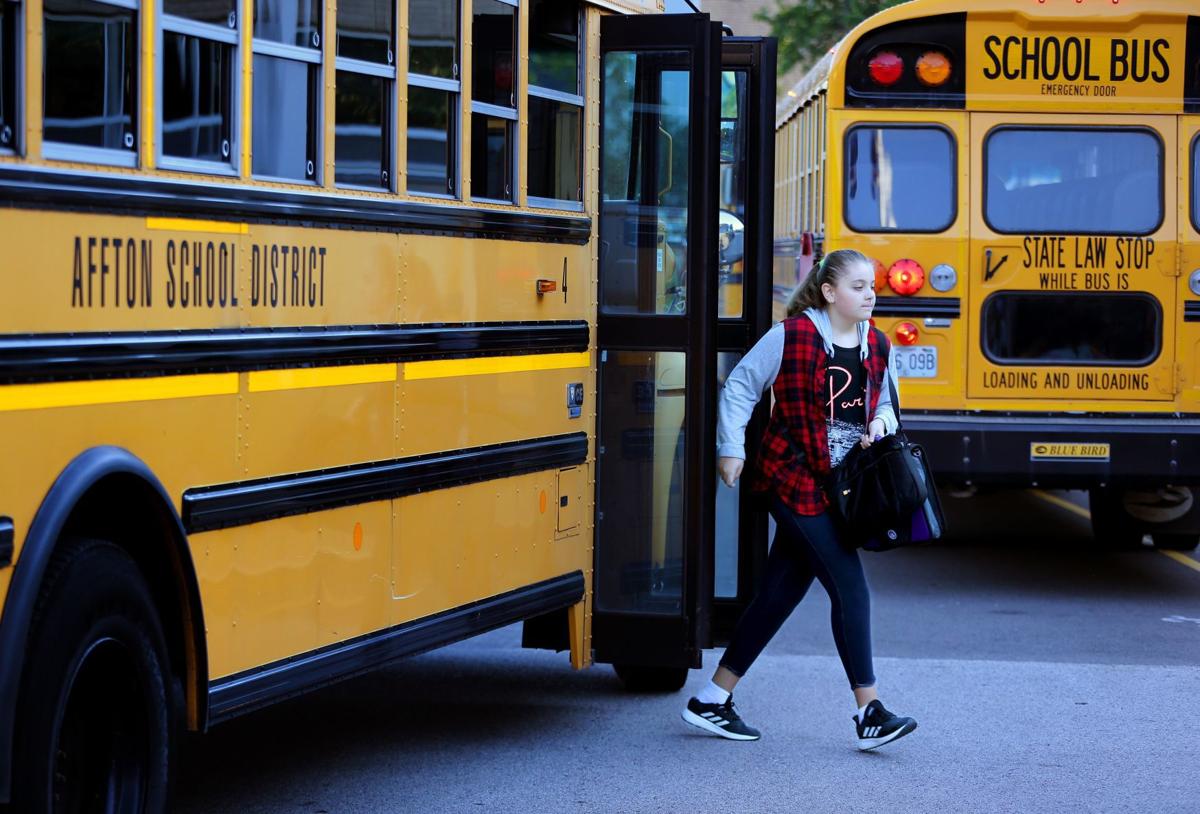 A Rogers Middle School student arrives for school on Thursday, Sept. 5, 2019. The Affton district school changed its start time to 8 a.m. from 7:10 a.m. this year.

AFFTON — At Rogers Middle School, Principal Jason Buck jokes that he needs sunglasses now when buses drop off students in the morning.

The school switched from starting at 7:10 a.m. to 8 a.m. this year, after decades of complaints from parents, students and staff about the morning bell that rang before dawn in the winter months.

“Mornings were really rough. Sometimes I was so tired I had trouble focusing in class, especially pre-algebra in first period,” said eighth grader Brandon Bennett, 13, of his two previous years at Rogers.

The 7:10 a.m. start was the earliest of any middle school in the St. Louis region. It had been a concern for as long as anyone could remember, especially for students walking to bus stops and starting class in the dark.

“You can’t get those kids to want to do fractions or equations if the sun’s not up,” said Jennifer DeSalme, an eighth grade history teacher who has also taught math. “Before there would be kids coming in trying to finish breakfast, trying to get a few more minutes of sleep.”

This year, “There haven’t been as many tardies. They’re here. They’re more engaged,” DeSalme said.

In the 1950s and 1960s, it was common for schools to start at 9 a.m. along with the typical workday. Starting times gradually moved back, for various reasons including budget cuts that required school buses to work on a staggered schedule. High schools typically start the earliest, to allow older children to care for their younger siblings and to have more time for jobs or sports.

Now more than 75% of Missouri schools and more than half of Illinois schools start before 8:30 a.m., according to the U.S. Department of Education.

The American Association of Sleep Technologists held a forum on the issue Saturday at its annual conference in downtown St. Louis.

In a recent position paper, the association suggests start times for middle and high schools no earlier than 8:30 a.m., in alignment with recommendations from the American Academy of Pediatrics and the National Parent Teacher Association.

Teenagers need at least nine hours of sleep for optimum brain function, according to the group, which treats people with sleep disorders.

The teenage brain works differently, with a body clock that triggers nighttime drowsiness up to two hours later than adults. That prime sleep pattern of 11 p.m. to 8 a.m. makes it difficult to get the recommended nine hours of sleep with early school bells, sleep experts say.

More than 75% of high school students sleep fewer than eight hours on school nights, according to a 2017 survey from the Centers for Disease Control and Prevention.

The sleep deficit can lead to behavior issues, difficulties with problem solving and shortened attention spans. The Start School Later campaign, a nonprofit based in Maryland, recognized Affton this year as one of about 50 school districts nationwide to move toward later start times.

Now that their start time is pushed back by nearly an hour, teachers at Rogers can hold staff meetings or supervise club activities before school. In a new program, 43 eighth grade students at Rogers can take algebra and a foreign language class at Affton High School in the first two periods of the day because the middle school starts later.

But not everyone is thrilled with the new schedule.

“I’m not a big fan of it. I like getting up earlier,” said Kaitlyn Lanemann, 12.

Last year when she was a sixth grader, school got out at 1:55 p.m. and Kaitlyn was home by 3 p.m. after extracurricular activities. Now she finishes up at 4 p.m., leaving less time for homework, especially when the St. Louis Blues are on television, she said.

For students like Addison Cousins, 11, the change means waking up at 5:30 a.m. instead of 4:30 a.m. to make it to the bus stop in time. Addison rides Metro buses to school through the voluntary integration program. This year, Addison hasn’t caught herself “on the bus dozing off,” she said.

At Mesnier Primary School for kindergarten through second grades, the morning bell was pushed from 8:10 a.m. to 9 a.m. The shift allows the district’s schools to start in order from the oldest to the youngest students.

Superintendent Travis Bracht said school leaders would be analyzing 2019-2020 attendance, discipline and test score data to help understand if the change in start times seemed to make any difference.

The change had no impact on the district’s budget, but appears to have improved the school climate, Bracht said.

“We’re not questioning if it’s the right decision,” he said. “They’re happier coming to school.”

A new elementary school is part of a $70 million plan to ease overcrowding in the 5,700-student Kirkwood School District.

William Luchtefeld of Edwardsville was charged with second-degree sodomy, a felony, and sexual abuse, a misdemeanor.

A Rogers Middle School student arrives for school on Thursday, Sept. 5, 2019. The Affton district school changed its start time to 8 a.m. from 7:10 a.m. this year.