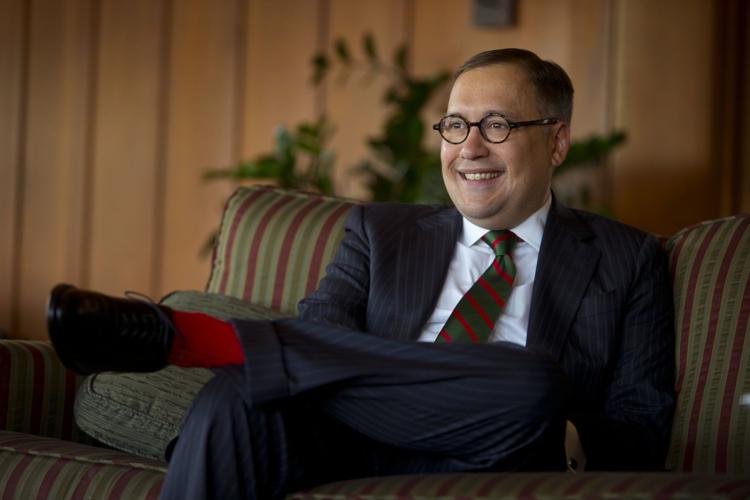 Andrew D. Martin, who will become the new chancellor at Washington University next June, is interviewed inside the Danforth University Center on campus on Friday, July 13, 2018. Photo by Robert Cohen, rcohen@post-dispatch.com 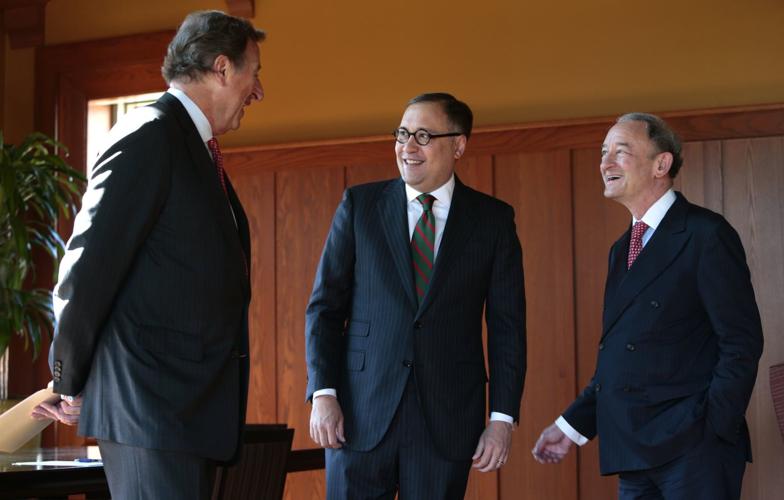 Andrew D. Martin (center), set to become the new chancellor at Washington University next June, visits with Craig Schnuck (left), chairman of the board of trustees, and Chancellor Mark Wrighton in the Goldberg Formal Lounge of the Danforth University Center on Friday, July 13, 2018. Photo by Robert Cohen, rcohen@post-dispatch.com 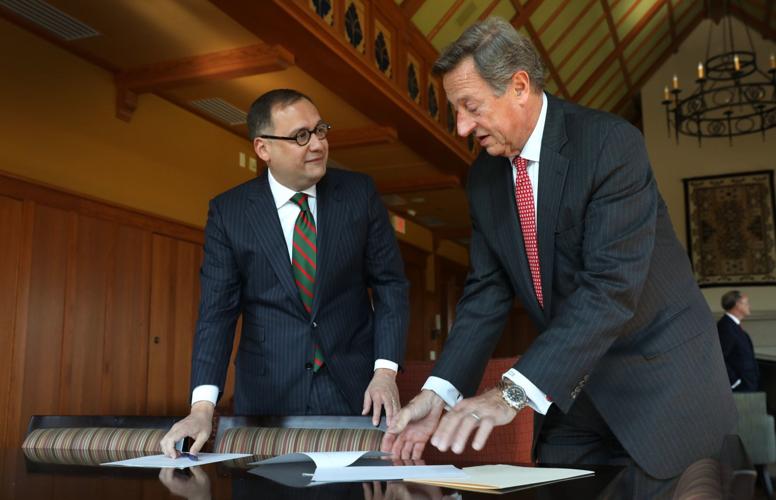 Andrew D. Martin, who will become the new chancellor at Washington University next June, signs contractual papers with Craig Schnuck, chairman of the board of trustees, in the Goldberg Formal Lounge of the Danforth University Center on Friday, July 13, 2018. The board is expected to vote Saturday to choose Martin to replace retiring Chancellor Mark Wrighton. Photo by Robert Cohen, rcohen@post-dispatch.com

For only the second time in its 165-year history, Washington University in St. Louis will be led by one of its own.

Andrew D. Martin will become the university’s 15th chancellor in June 2019, the board of trustees announced after a special meeting Saturday.

Martin, dean of the University of Michigan’s College of Literature, Science and the Arts since 2014, earned his doctorate in political science from Washington U. in 1998 and spent 14 years there as a professor and administrator.

“We had four excellent finalists, and we picked Andrew because he was the most outstanding,” said Craig Schnuck, chair of the university’s board of trustees and the 20-member chancellor search committee. “He is a highly regarded academic, he is a proven and capable administrator, he has a strong focus on diversity and inclusion. His priorities match the priorities of the university.”

Martin will replace Mark Wrighton, who became chancellor in 1995 and announced his retirement last year.

Schnuck said the committee had looked for someone who could “understand, nurture and grow” the university’s culture of high academic achievement and community service. A survey of 9,000 alumni along with meetings with students, faculty and staff helped the committee decide on its priorities for choosing the next leader, he said.

Nancy Staudt of the law school and David Perlmutter of the medical school are other recent examples of administrators who returned to Washington U. after stints at other schools.

“It says a lot about an institution and the way it treats people,” said Holden Thorp, executive vice chancellor. “I don’t think there’s any better readout than that Andrew Martin wanted to come home.”

At just 45, Martin is poised to follow in the long-term tenures of his two most recent predecessors, Wrighton and Dr. William Danforth, who was chancellor from 1971 to 1995. The average age of college presidents nationwide is 62, according to the American Council on Education.

Only former chancellor Ethan Shepley, who served from 1953 to 1961, was also a graduate of Washington U.

Martin focused on using mathematical models to study politics and court rulings while earning his doctoral degree. The Martin-Quinn ideology score, based on research by Martin and colleagues in St. Louis and Michigan, measures the political leanings of Supreme Court justices based on their voting records.

During his studies, a mutual friend introduced Martin to his now-wife, Stephanie, who earned bachelor’s and master’s degrees in nursing at St. Louis University. Their daughter, Olive, was born in 2008.

Even after the family lived in Michigan for four years, “when anybody asks (Olive) where she’s from, she would say St. Louis,” Martin said.

The return to St. Louis means moving into the chancellor’s residence, just a few blocks east on Forsyth Boulevard from Martin’s grad student apartment. Many friends and former co-workers, who threw him a Dean Martin-themed party when he took the job in Michigan, are still in town.

St. Louis is “the place that I’ve lived the longest my entire life,” Martin said. “The opportunity to come in and lead this world-class institution in a world-class city that I care so deeply about is the perfect combination.”

Three years ago, the New York Times dubbed Washington U. the best school with the worst economic diversity. The university has previously been criticized for cherry-picking affluent students from top high schools to boost its academic reputation.

As recently as 2012, just 5 percent of its undergraduates came from low-income families. That has risen to 13 percent after a boost to financial aid and other diversity initiatives.

More than 10 percent of students are underrepresented minorities, including African-American and Latino, with a goal of 20 percent or higher.

The incoming chancellor “agrees with me we have a lot to do to make up for the past when it comes to access to higher education for all,” said Thorp, provost and executive vice chancellor for academic affairs who oversees diversity programs. Just this week, Washington U. named Nicole Hudson, racial equity adviser to St. Louis Mayor Lyda Krewson, as the leader of its new Academy for Diversity and Inclusion.

Some alumni, faculty and students saw Wrighton’s exit as an opportunity for an African-American or a woman to assume the leadership role for the first time.

Racial tension most recently erupted on campus after Ferguson became the flash point for the Black Lives Matter movement. In December 2014, Wrighton acknowledged “unacceptable acts of racism” at the school in an email to students and faculty. Soon after, administrators met with a group called Washington University Students in Solidarity to work on ideas for improving relations with black and Latino students.

In April, hundreds of students protested administrators’ handling of sexual assault allegations. The U.S. Department of Education has opened at least three investigations of sexual assault claims at Washington U. in the last year.

“Any time there’s a change in administration or leadership it’s always an opportunity to think about how to do better going forward,” said Mae Quinn, a former Washington U. law professor who criticized the school for a “lack of commitment to our community.”

“I would hope that the search committee was interested in having leadership that is attuned to issues of the 21st century, mindful of differences and understands issues around diversity,” Quinn said.

Washington U. is not alone in the lack of diversity at the top. The typical college president is a white man in his early 60s. Just 11 percent of private, nonprofit colleges have a minority leader. Fewer than a third of college presidents are women.

Empress Sanders, an assistant dean for engineering student services and the lone black woman on the chancellor search committee, was unavailable to comment on Martin’s hiring. The committee’s chairman Schnuck said race and gender were “absolutely considered” in the hiring decision.

“What we set out to do was to find the very best person to serve as chancellor of the university,” he said. “We wanted that person to have a very strong, proven track record in diversity and inclusion issues. We weren’t going to pick someone just to make a statement in that area. We wanted to pick (someone) with the absolute right dedication to diversity and inclusion who will maximize the entire university’s progress going forward.”

Sam Messenger, one of two undergraduates who worked on the search committee, said students talked to him about “the racial, ethnic and income diversity or lack thereof” at WU and about wanting a change in direction after Wrighton’s lengthy tenure.

When reviewing job applicants, Messenger said, he was looking for someone who will build trust with students and who “has a commitment to diversity/inclusion/equity, believes in it and proves it.”

He said skeptical students should feel assured that Martin will listen to their concerns about equity.

The new chancellor “may not look like someone that embodies this interest, but he’s really shown an interest and dedication to it,” Messenger said.

Martin led a push at Michigan to diversify its campus with a 33-point plan for improving minority recruitment, scholarships and inclusive events.

“Any academic institution can’t be excellent unless it’s diverse,” Martin said. “We are in the business of bringing the most talented people together to learn, to teach, to take care of patients and to serve the world.”

Any viable candidate for chancellor had to prove his or her experience with diversity issues, said Barbara Schaps Thomas, a member of the board of trustees and the search committee.

Thomas, retired chief financial officer for HBO Sports and a graduate of Washington U., said she was most impressed with Martin’s belief in the importance of a liberal arts education.

“He understands how a person with a well-rounded education will be more successful,” Thomas said, adding that arts and humanities courses “allow someone to understand another person’s viewpoint.”

Martha Pollack, now president of Cornell University, hired Martin at Michigan and called him “an inspired choice” for Washington U. At Michigan, Martin helped ease tension when white supremacist flyers and racist vandalism on campus prompted protests in the fall semesters of 2016 and 2017.

“He’s just a very good listener,” Pollack said. “Andrew went out and met with students, listened to them, helped work through it.”

Fundraising is a major challenge for any chancellor, and Schnuck said Martin’s talents in that area were a critical factor in his pick.

At nearly $8 billion, Washington University’s endowment is in the top 20 of colleges nationwide. Still, the figure is “far smaller than universities that we aspire to have as peers,” Schnuck said. The five richest university endowments top $20 billion, according to the U.S. Department of Education.

“What we wanted to find is someone who could build upon the great work of the past two chancellors and continue the ascendance of Wash U,” Schnuck said.

Wrighton said he planned to stay involved at the university in an advisory role and felt confident that the improvements during his term would continue.

“I’m feeling even better now that I know a great successor is on the way,” he said.

Education: College of William and Mary, bachelor's degree in mathematics and government, 1994

More than half of the programs have waiting lists this year, a 46% increase from 2021, according to the nonprofit Afterschool Alliance based in Washington.

Andrew D. Martin, who will become the new chancellor at Washington University next June, is interviewed inside the Danforth University Center on campus on Friday, July 13, 2018. Photo by Robert Cohen, rcohen@post-dispatch.com

Andrew D. Martin (center), set to become the new chancellor at Washington University next June, visits with Craig Schnuck (left), chairman of the board of trustees, and Chancellor Mark Wrighton in the Goldberg Formal Lounge of the Danforth University Center on Friday, July 13, 2018. Photo by Robert Cohen, rcohen@post-dispatch.com

Andrew D. Martin, who will become the new chancellor at Washington University next June, signs contractual papers with Craig Schnuck, chairman of the board of trustees, in the Goldberg Formal Lounge of the Danforth University Center on Friday, July 13, 2018. The board is expected to vote Saturday to choose Martin to replace retiring Chancellor Mark Wrighton. Photo by Robert Cohen, rcohen@post-dispatch.com