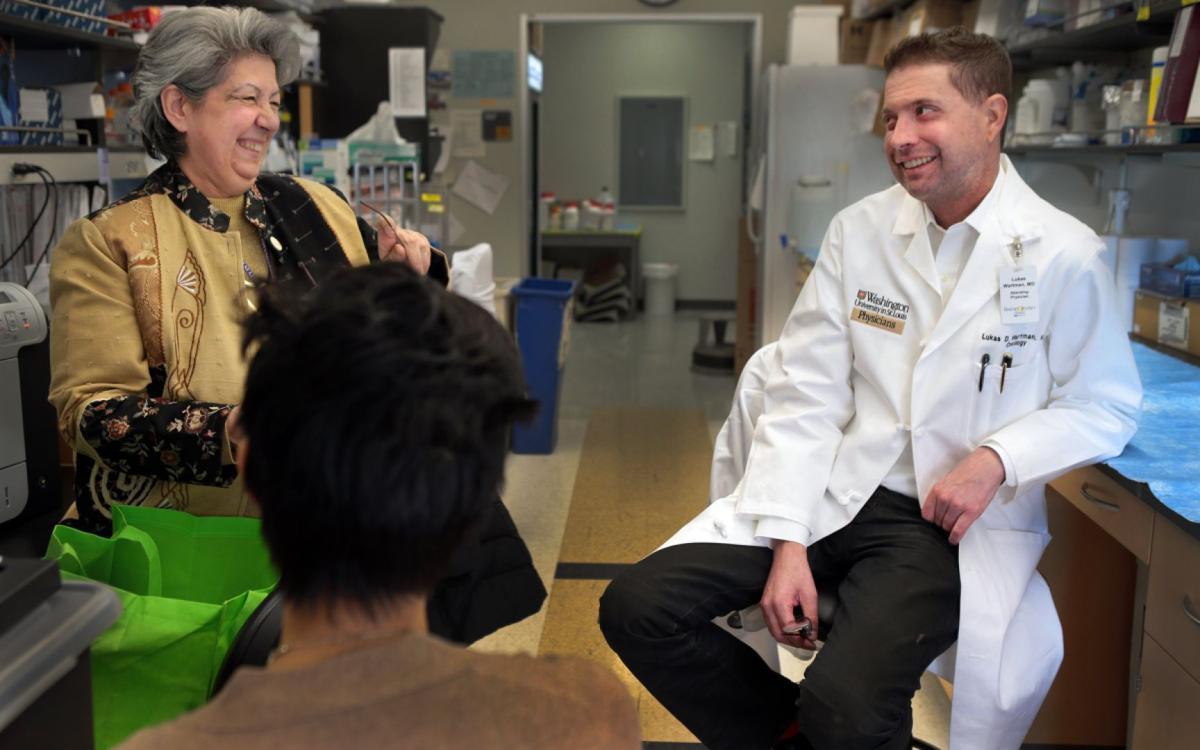 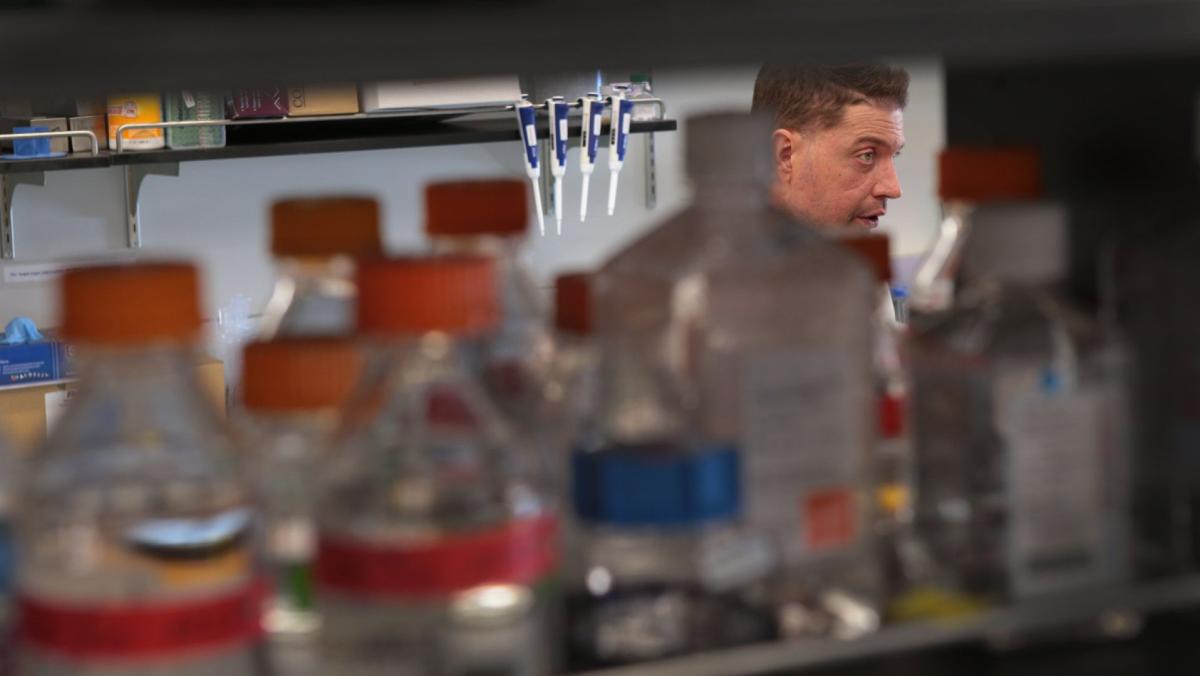 Dr. Lukas Wartman visits with researchers in the lab of The Genome Institute at Washington University on Thursday, Dec. 11, 2014. Photo by Robert Cohen, rcohen@post-dispatch.com 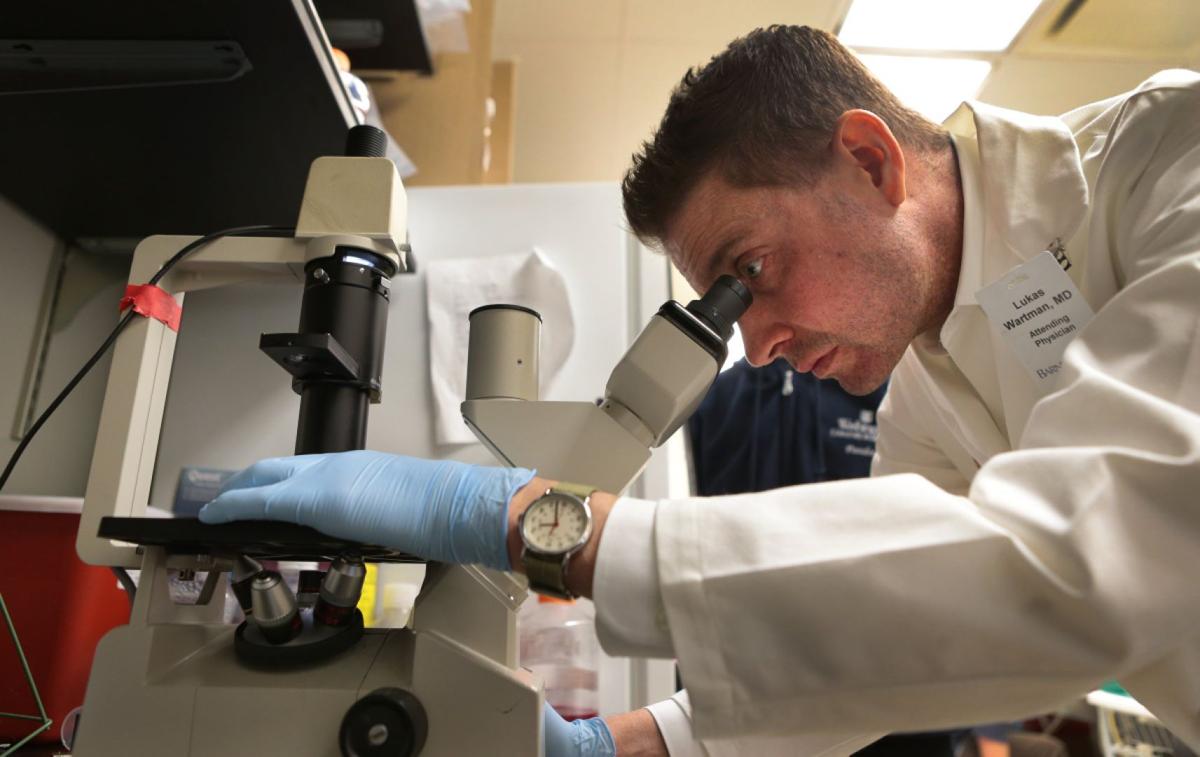 Dr. Lukas Wartman looks at cell colonies forming from the bone marrow of genetically engineered mice while working in his lab at The Genome Institute at Washington University on Thursday, Dec. 11, 2014. Photo by Robert Cohen, rcohen@post-dispatch.com 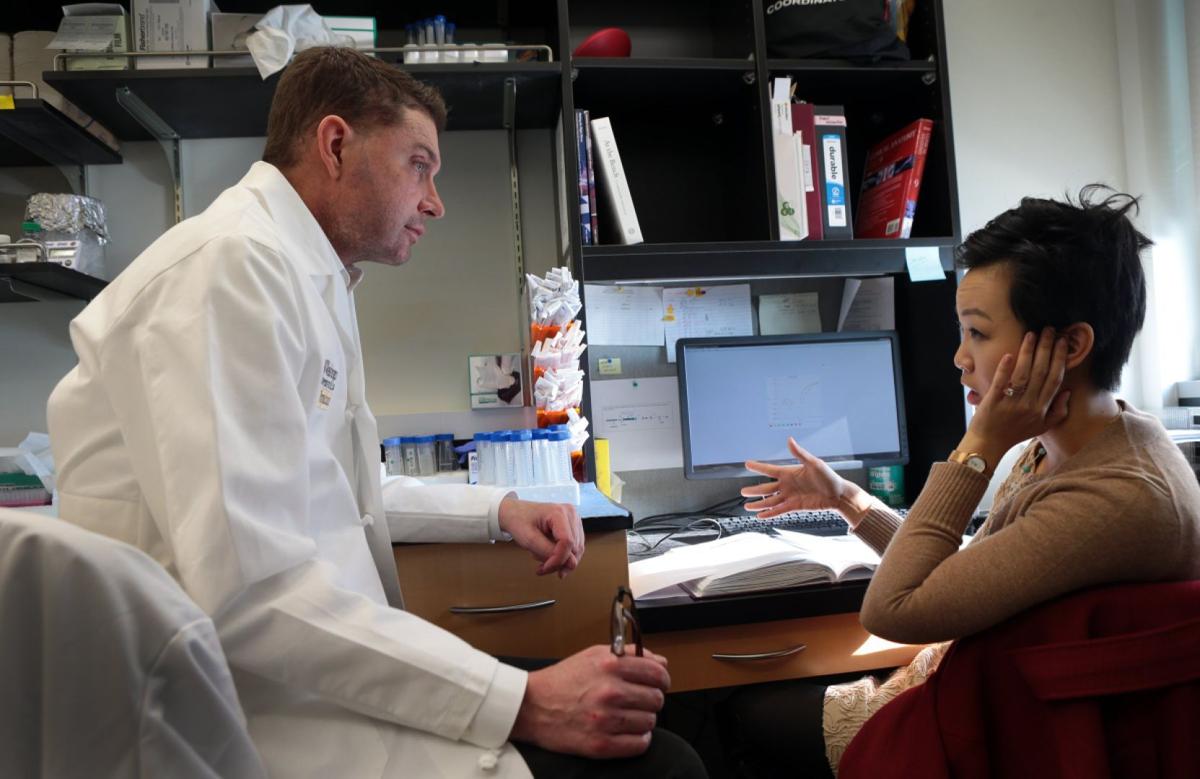 Three years ago, at the age of 34, Lukas Wartman was handed a death sentence when his leukemia returned for the second time. Lucky for him, he was doing a fellowship at Washington University School of Medicine, home to one of three top research centers in the country unraveling genetic mysteries behind disease.

Wartman was able to take part in a study by the university’s Genome Institute that involved sequencing genomes of cancer patients. Scientists discovered a gene in overdrive that had yet to be identified with his acute lymphoblastic leukemia. A drug approved to treat kidney cancer actually targeted that gene. Within two weeks of taking it, Wartman’s cancer was gone.

“I believe very strongly that had I been anywhere else in the world, I would’ve died,” he said. “This groundbreaking research here at the time gave me the silver bullet to treat my leukemia.”

To continue its pioneering advances in the prevention and treatment of disease, civic leaders James S. McDonnell III and his wife, Elizabeth Hall McDonnell, have endowed the Genome Institute with $25 million.

McDonnell, 78, served as a director of the McDonnell Douglas Corp. (founded by his father) until its 1997 merger with The Boeing Co. McDonnell and his family have long been supporters of the medical center, including helping build a pediatric disease research center in memory of their daughter, Peggy, who died of cancer in 1972 at the age of 2. James McDonnell’s mother died of breast cancer when he was 13.

Wilson called Wartman’s case the holy grail of what genomics can do and hopes it will someday be the norm in treating disease.

“What can we do to make that commonplace,” Wilson said, “and not extraordinary?”

The institute was founded in 1993 as researchers across the world worked to decode all 6 billion letters of our genetic blueprint — a collective effort known as the the Human Genome Project. The project was “biology’s moon shot.”

Scientists at Washington University jumped into the race, feeling that they could develop methods and technology that would make it faster and cheaper to analyze large amounts of DNA — the genome’s hereditary code.

The institute contributed 25 percent of the blueprint when the final draft was completed in 2003. “I think we just had some really good early ideas that sustained us in the ’90s, and we ended up being one of the early centers integral in the Human Genome,” Wilson said.

At the beginning of the project, one experiment would decode about 2,000 letters and take two days to complete — “like building cars by hand,” Wilson said. “By the time the project was done, we could do a couple hundred million letters in a couple days at probably a thousandth of the cost.”

With that momentum, the institute turned to doctors caring for patients to figure out what to do next.

“We asked ‘Are there important questions that we can use human genomics to solve?’ ” Wilson said. “What we really focused our efforts on was cancer.”

Doctors not only wondered what caused cells to form tumors, but why some patients responded well to treatments while others didn’t or why some cancers spread while others were contained.

Wilson and his colleagues wondered: “What if we took tumor cells and purified the DNA from those cells and compared it to the DNA in healthy cells? Could we compare the two sequences and find mutations that we could point to and say, ‘This is why a particular person has cancer?’ ”

While studying lung cancer in 2003, they looked at a new drug that was eliminating lung tumors in 10 percent of patients. Sequencing showed those patients shared a mutation, allowing oncologists to know for whom to prescribe the expensive drug.

“It really opened everyone’s eyes for the first time. We can use genomics to sequence tumor cells and and figure out why a particular drug helps a particular type of patient,” Wilson said. “We can do this with other cancer types, and maybe we can design new drugs.”

The term “personalized medicine” started to get tossed around.

Next-generation sequencing technology sped up the process even more about 2007. Researchers at the institute began to consider looking beyond the 500 genes known to be linked to cancer and explore an individual’s 25,000 genes.

“There are lots and lots of patients who didn’t have mutations in the usual suspects,” Wilson said. “We knew we had to expand to the whole genome.”

Naysayers said it was impossible, Wilson recalled, but in 2008, the institute was the first to sequence the cancer genome of an acute myeloid leukemia patient.

Over the next two years, researchers sequenced 150 more genomes involving all types of cancer, developing innovations along the way in how to sort and manage the data.

In 2010, the institute partnered with St. Jude Children’s Research Hospital in Memphis, with deep pockets and an enormous number of patients, and it has since sequenced 750 pediatric cancer patients, leading to discoveries in 22 types of cancer.

Lung cancer specialist Dr. Ramaswamy Govindan said that because of the work, several mutations in lung cancer patients had been identified and targeted with drugs, saving lives and avoiding toxic chemotherapy.

“St. Louis should be proud of the fact that it is in the midst of all this scientific advancement,” Govindan said.

The institute — one of only three federally funded large-scale genome centers in the country — is staffed by some of the brightest minds. Four researchers at the institute were among 17 scientists on Thomson Reuters’ “hottest” list for publishing the greatest number of papers most cited by others.

About 200 people in a wide range of fields work in the offices and laboratories of the institute, spread across three floors of a six-story medical office building on Forest Park Parkway. And they study much more than cancer.

They analyze diseases and conditions such as Alzheimer’s, Lou Gehrig’s and autism. They sequence the genomes of microbes that colonize the body and keep us healthy, of animals with characteristics that mimic human disease, and of other organisms that play key roles in infectious disease, agriculture and the environment. They study pathogens and parasites.

They also work to improve the accuracy of the human genome reference and build a database of mutations and their drug targets.

The biggest discovery so far, Wilson believes, is learning that different types of cancer can share the same mutation. One type of cancer could benefit from a drug approved for another. “Genetics of the tumor are more important than what organ it is sitting in,” he said.

“What insurance companies want to know is, ‘Which cases are worth sequencing?’ ” Wilson said.

Once the drug that targeted Wartman’s cancer-causing gene was identified, his insurance company would not cover the cost. Friends helped him pay for the $10,000-a-month supply. After a stem-cell transplant, he has not needed it.

In a twist of fate, Wartman now works in the Genome Institute, leading a research team that combines genomics and conventional laboratory investigations in the study of leukemia and other tumors.

“It’s the promise of this type of technology and applying it to patient care that is really, really great,” he said. “That is what I’m dedicated to working on now, to bridge that promise to make this something that is really practical.”

• 2010: $60 million from John F. McDonnell and the JSM Charitable Trust to Washington University

Computer programmer with metastatic melanoma beats the odds with help from the Genome Institute at Washington University.

"We have an opportunity to push genomics into the clinic and understand what causes disease and ultimately learn how to predict disease," said Rick Wilson, director of the Genome Institute.

How DNA sequencing is transforming the hunt for new drugs

The dramatically lower cost is making the research possible

Dr. Lukas Wartman visits with researchers in the lab of The Genome Institute at Washington University on Thursday, Dec. 11, 2014. Photo by Robert Cohen, rcohen@post-dispatch.com

Dr. Lukas Wartman looks at cell colonies forming from the bone marrow of genetically engineered mice while working in his lab at The Genome Institute at Washington University on Thursday, Dec. 11, 2014. Photo by Robert Cohen, rcohen@post-dispatch.com 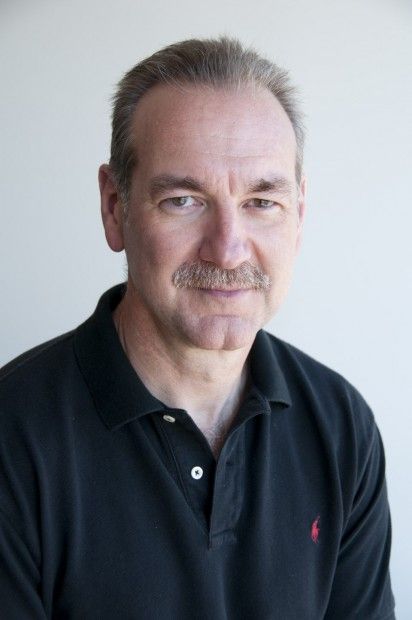 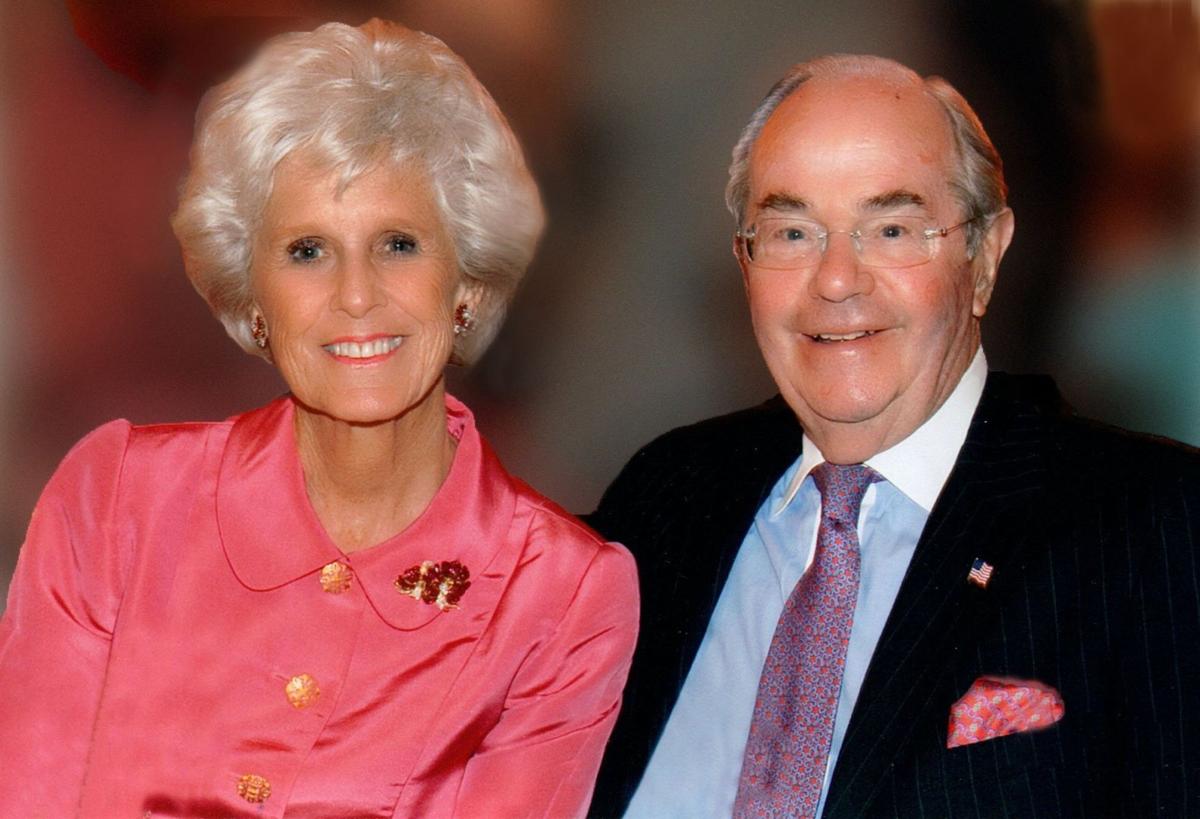