Ten teachers in the Metro East who refuse to comply with statewide vaccine and mask mandates are suing their school districts over the policies.

The lawsuit against Triad, in Troy, and Edwardsville school districts and their superintendents says the mandates were illegally issued. The claim filed in Madison County Circuit Court asks that the teachers be allowed to continue working in their schools.

The school districts “don’t have the delegated authority to compel vaccination or testing,” said attorney Thomas DeVore of Greenville. “They could have stood up for their educators … but they don’t want to take on the governor.” 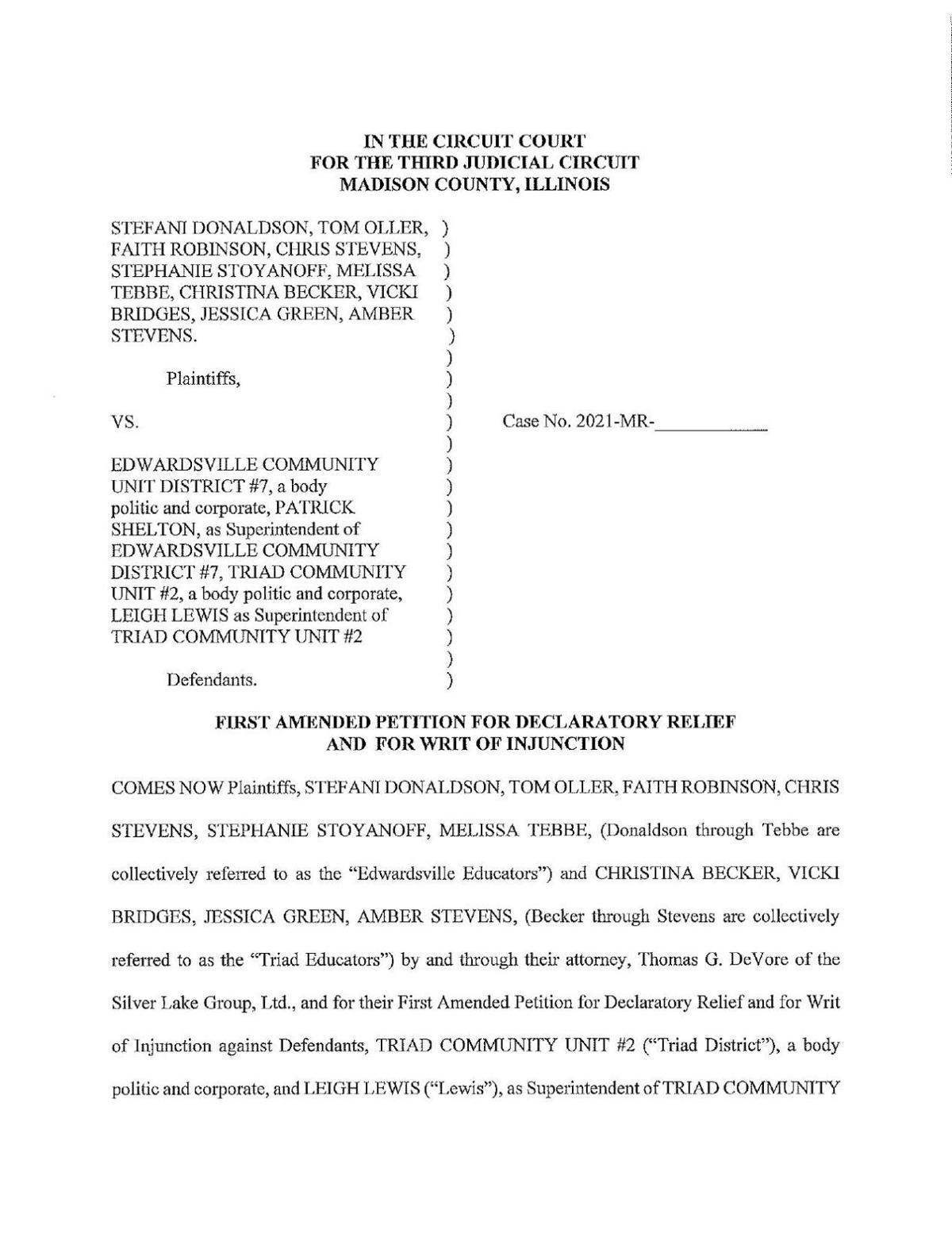 All school staff in Illinois were required to complete COVID-19 vaccinations by Sept. 19 or submit to weekly testing, under an executive order from Gov. J.B. Pritzker. Those in noncompliance are not to be allowed on school grounds. DeVore said the teachers have not been fired, but he doesn’t know if they are still teaching in person.

Six of the teachers work in Edwardsville, and four are in Triad, which includes schools in Troy, Marine and St. Jacob in Madison County.

A spokeswoman for Edwardsville schools said the district “continues to comply with executive order. Providing all students and staff a healthy and safe in-person learning environment remains our top priority.”

“Triad Education Association is committed to delivering the best possible education to the students of the Triad School District in the safest environment for the students and staff possible,” reads a statement from the Triad union. “Ninety percent of teachers in the Triad School District are vaccinated, and the majority of those who are not are willingly complying with the testing mandates set forth by the state.”

DeVore is also suing Triad on behalf of three parents over its mask mandate for students, which also stems from an executive order by the governor for universal masking in Illinois schools.

Stephanie Jones, an attorney for Triad Superintendent Leigh Lewis, said in a statement that the district plans to fight the mask lawsuit. She said such suits “only serve to punish school districts for following the state’s health and safety guidance.”

DeVore said he also plans to sue the Illinois State Board of Education over its stated plans to investigate and possibly decertify schools or districts that don’t comply with the mandates.

Without a statewide mandate from Missouri, few school districts in the St. Louis area have issued their own vaccine mandates.

There have been no resignations among school staff in the Ferguson-Florissant School District, where a mandate is in place. More than 92% of teachers and 81% of all school staff have been vaccinated. Those who qualified for medical or religious exemptions or otherwise refused vaccination are tested weekly, said Onye Hollomon, Ferguson-Florissant’s director of communications.

“We know it’s the greatest mitigation tool that we have, when we’re looking at keeping staff and students as safe as possible,” Hollomon said.

Two teachers have resigned and another two retired rather than comply with the vaccine mandate in St. Louis Public Schools, according to Superintendent Kelvin Adams. The district’s mandate goes into effect Oct. 15.

The Post-Dispatch discovered the vulnerability in a web application that allowed the public to search teacher certifications and credentials.

Art includes two pieces by Frederick Oakes Sylvester, an art director at the city's Central High in the early 1900s who was showcased at World's Fair.

‘Exhausted and anguished’: SLU responds to suicide deaths of two students on campus

An online petition urges more mental health resources for students. There is no indication the deaths are related, campus officials said.

The messages appeared last week in Parkway Central High School bathrooms and prompted students to walk out in protest of racism in the district.

Hancock, Bishop DuBourg team up for football in St. Louis

'I don't care what school you go to. This is a brotherhood.'

Central High School Principal Tim McCarthy said the student would be held accountable "within the parameters of the district's discipline policy."