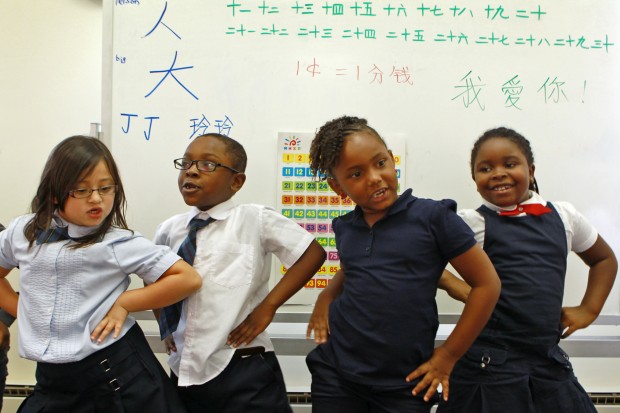 First graders Alison Smith (from left), Darius Williams, Aynalie Joy and Pleasure Stovall sing and dance to the name of the months in Chinese on Wednesday, Oct. 3, 2012, at the Language Immersion School in St. Louis. Photo by Huy Mach, hmach@post-dispatch.com 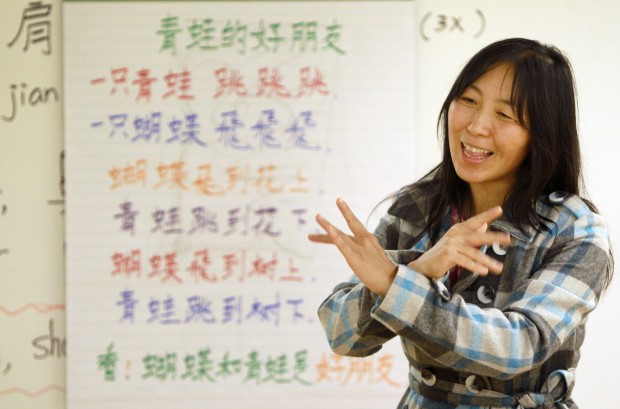 Reading teacher Naxin Fan teaches a story in Chinese about a frog and a butterfly to a first-grade class on Wednesday, Oct. 3, 2012, at the Language Immersion School in St. Louis. Photo by Huy Mach, hmach@post-dispatch.com 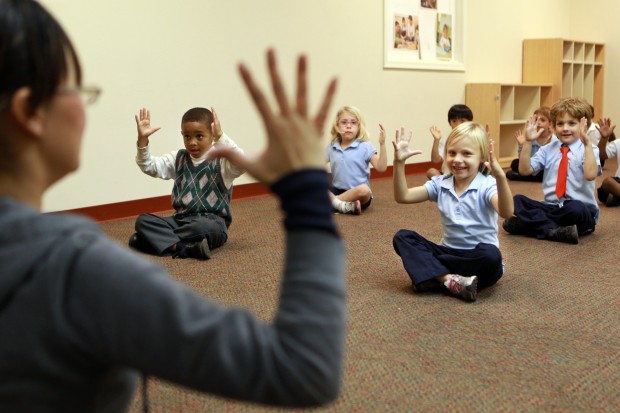 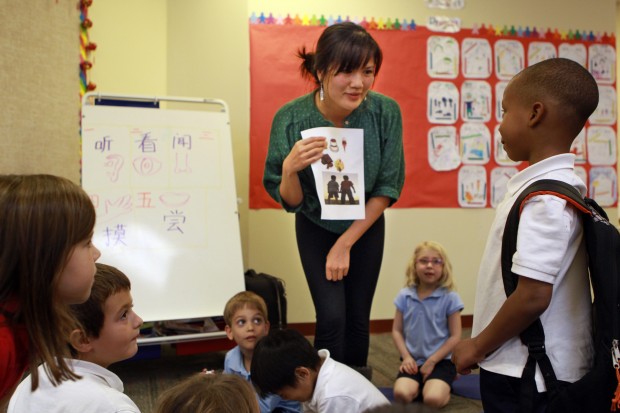 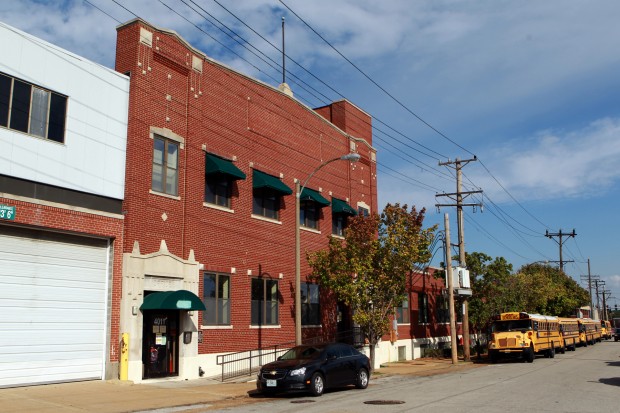 ST. LOUIS • The moment was brief but telling for Lydia Hsiuling Chen as she watched one of her students accidentally step on the foot of another as they headed out to recess.

"Dui bu qi," the kindergartner said quickly as she continued on her way. The classmate, looking slightly annoyed but accepting of her apology, muttered his reply, telling her it was OK — also in Chinese.

It was a natural inclination to use what was an entirely foreign language to them less than two months ago. And it was an early sign of success for The Chinese School, the newest program that began this year at St. Louis Language Immersion Schools.

"They are not just learning Chinese, they are living with Chinese," said Chen, who serves as head of the school.

It is the third language immersion program offered at the public charter school in the city. Schools that focus on French and Spanish are now in their fourth year and are popular, with total enrollment more than doubling from two years ago to about 800 students this year. The schools, which are tuition-free, have a waiting list and now a second campus.

The Chinese school and the Spanish school operate at Highway 40 (Interstate 64) at Vandeventer Avenue. The French program is at 19th and Pine streets downtown.

But parents also acknowledge trepidation about enrolling their children in such a drastically different school. Language immersion schools are relatively new to the St. Louis area, although 448 programs operated in U.S. public and private schools last year. The number has been growing since the 1970s.

"It's scary," said Jeff Craig-Meyer, who has a kindergartner in Chinese and a second-grader in Spanish. "It was a risk, but also a really good opportunity."

This year was the first time students at St. Louis Language Immersion Schools took state standardized tests in communication arts and math. Of the 44 third-graders, who have spent the majority of their academic careers learning in a foreign language, 25 percent passed communication arts and 34 percent passed math. That's better than St. Louis Public Schools averages, but below state averages for third-graders of 46 percent and 52.5 percent, respectively.

But Rhonda Broussard, founder of St. Louis Language Immersion Schools, and others who have studied test scores in similar schools, were not surprised. Broussard expected their average students to perform below grade level, and anticipates they will not catch up until fifth grade.

That's because the schools do not begin teaching English until second semester of the second grade. For the first two years — a key time frame for children to learn a second language — all subjects are taught in Chinese, Spanish or French. The students have been taught math in a foreign language, and the tests are given in English.

Fred Genesee, a professor at McGill University in Montreal who has studied language immersion schools in the U.S. and Canada, says students at the schools need at least a year to catch up to their grade level on standardized tests after they begin studying English.

"These programs really do very well, but people do have to be patient in the beginning," Genesee said. "In the long run ... kids score better and at the same time, they acquire a high level in a second language."

Broussard says the school's end goals are clear — leaders want to achieve standards in the International Baccalaureate, develop long-term critical thinking skills in students as well as success in traditional subjects and an immersion language.

Like traditional schools, the school has set up support systems to help students who are struggling based on results from the Missouri Assessment Program and other tests.

Last week as the school day began at The Chinese School, Yamin Wu, one of the physical education teachers, greeted students at the door with "good morning" in Mandarin.

"Zao shang hao," they repeated back as they walked upstairs with their backpacks.

Later, students sat cross-legged in Wu's class and did yoga, counting in Chinese as they went through poses.

In the first several weeks of school, the kindergarten and first-grade teachers used more English as the students adjusted to their new school.

Teachers lead lessons in traditional subjects such as reading, math and art but do so in a foreign language, with all of the instruction in the first two years in French, Spanish or Chinese.

On a recent school day, the majority of the lessons were in Chinese, with the occasional direction in English as teachers managed classroom behavior. For the first few years, students learn to read and write in the immersion language. After 18 months, each student is expected to communicate entirely in his or her immersion language.

The Chinese school has only kindergartners and first-graders this first year, but intends to add grades and classes each year. Like its counterparts in St. Louis Language Immersion Schools that focus on Spanish and French, the school expects to graduate students who are bilingual and potentially fluent in three languages. Students will have the chance to study a third language starting in middle school.

Broussard envisions 4,800 students in K-12 by 2024. The schools have about 800 students total, with more than half in the Spanish school and 75 in kindergarten and first grade in the Chinese school.

Carmen Hornberger, whose 5-year-old son is in the Chinese school, said she weighed the pros and cons of the school and had been "interrogating" Broussard for the past year and a half.

"I had some concerns about reading and math if children are not learning any English," Hornberger said. "You have to ask yourself, 'What path do I really want him to be on?'"

The ability to be fluent in two or three languages, she decided, would help him throughout his life in a world in which so much business already is done with those overseas.

Seven weeks into the school year, her son is picking it up, counting in Chinese, naming colors in Chinese — and correcting his mother as she repeats after him.

Local teacher and husband are starting a Mexican school

Angie Guzman has loved learning Mexican cooking and culture and is about to be fully immersed.

At the New American Preparatory Academy, children from 23 countries speaking 18 languages come together to get better acclimated to U.S. culture.

First graders Alison Smith (from left), Darius Williams, Aynalie Joy and Pleasure Stovall sing and dance to the name of the months in Chinese on Wednesday, Oct. 3, 2012, at the Language Immersion School in St. Louis. Photo by Huy Mach, hmach@post-dispatch.com

Reading teacher Naxin Fan teaches a story in Chinese about a frog and a butterfly to a first-grade class on Wednesday, Oct. 3, 2012, at the Language Immersion School in St. Louis. Photo by Huy Mach, hmach@post-dispatch.com