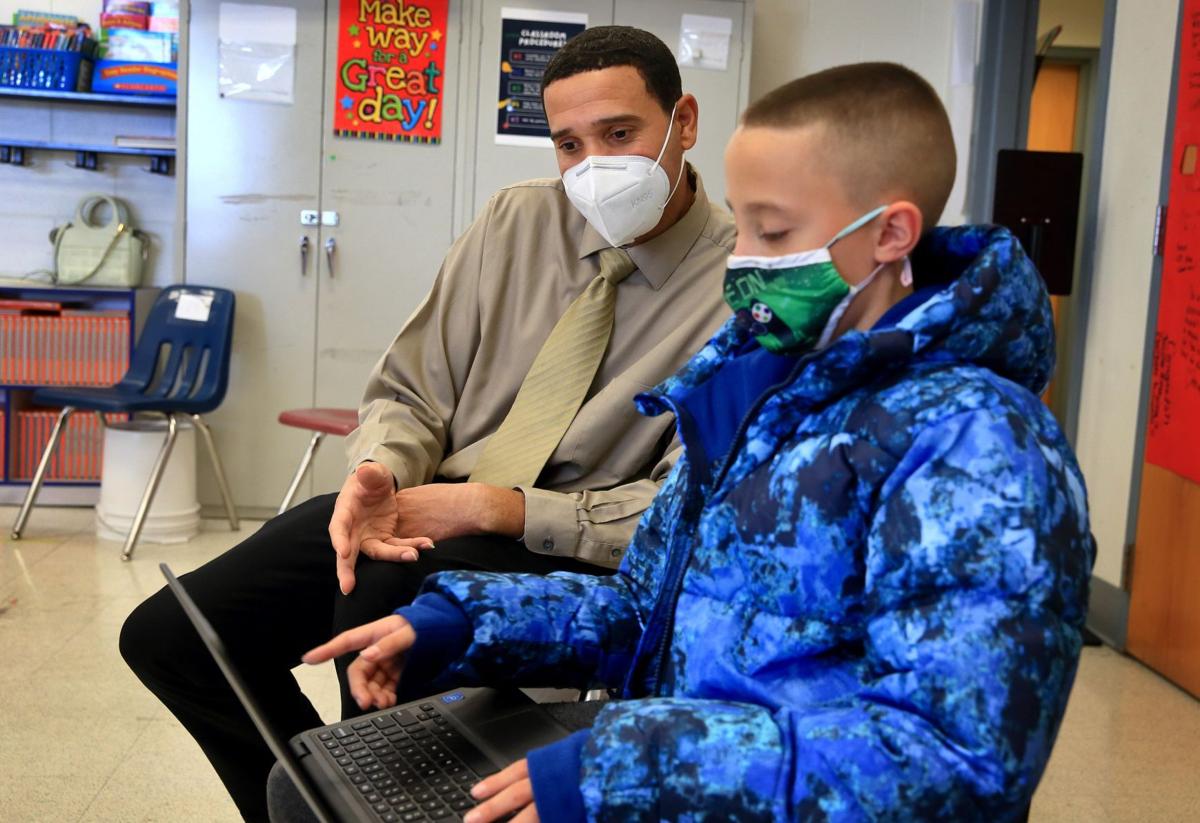 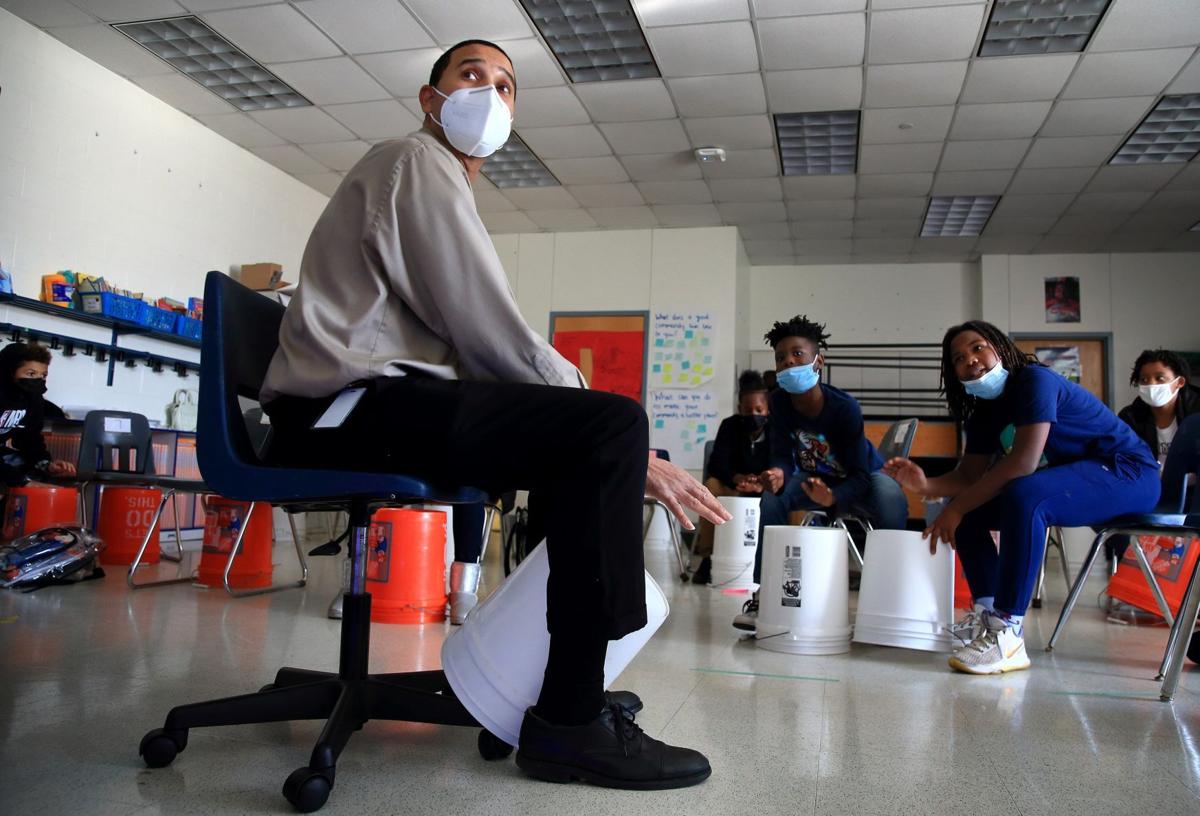 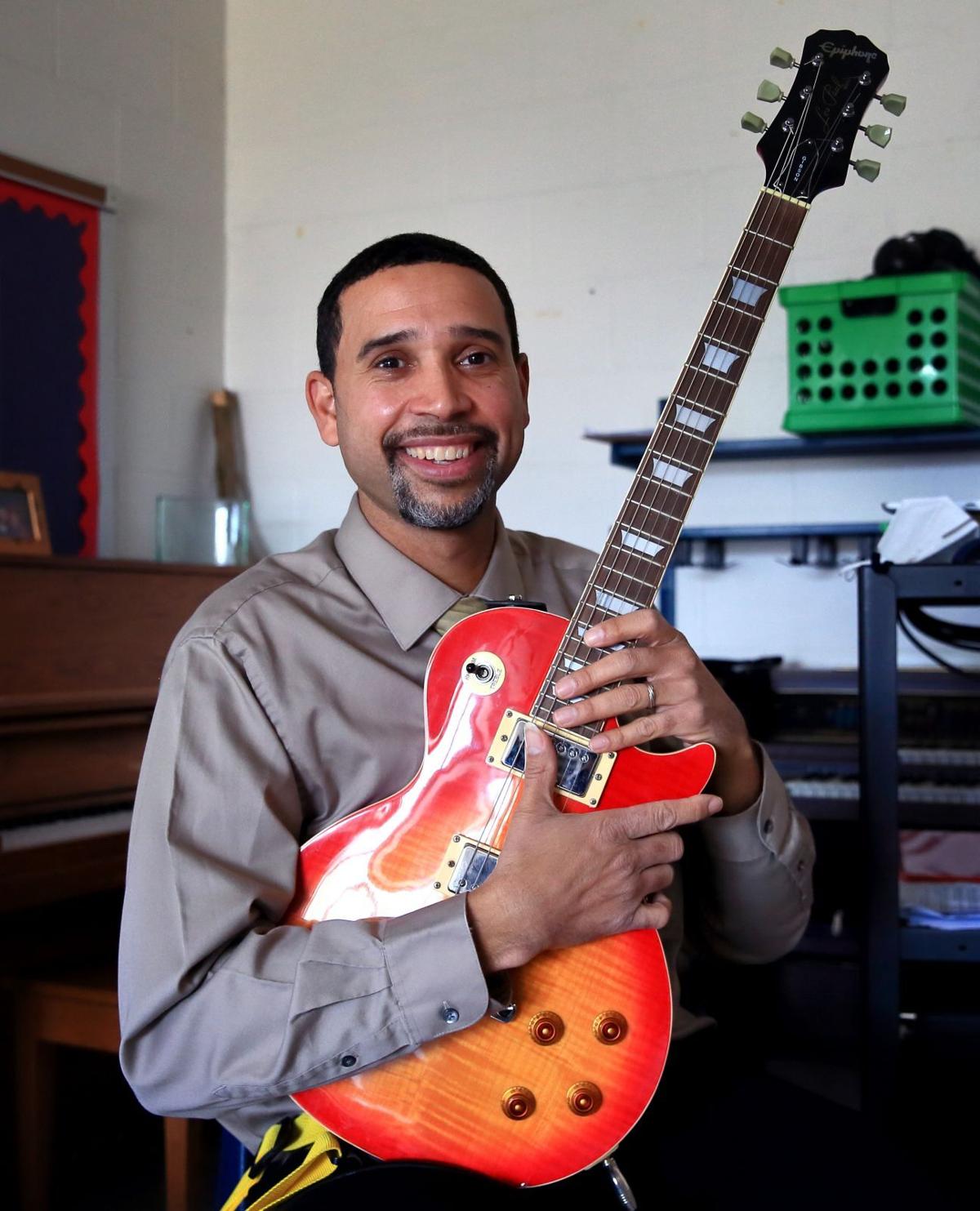 James Young, a musical theater, vocal music, and guitar teacher at Johnson-Wabash Sixth Grade Center in the Ferguson-Florissant School District sits for a portrait in his classroom on Thursday, Nov. 18, 2021. Young is the first teacher from the Ferguson-Florissant School District to be named Missouri’s teacher of the year. Photo by David Carson, dcarson@post-dispatch.com

FERGUSON — The last words James Young’s grandmother sang to him before she died were, “The sun will come out tomorrow,” from the Broadway musical “Annie.”

Elizabeth Hutcherson-Rucks, a music teacher for more than 40 years in the Ferguson-Florissant School District, liked to say she never had a bad day of teaching.

Her optimism inspires Young in his own role as a musical theater teacher in the same district. This fall, he was named the 2022 Missouri Teacher of the Year.

“He’s teaching with his whole heart,” said Carlyn Moore, Young’s colleague at Johnson-Wabash Sixth Grade Center. “It’s so much more than content — it’s life lessons and how music can change your life.”

Young grew up in Kinloch, where his great-grandmother Hattie Stevenson was one of the first directors of the Kinloch Fire Protection District and helped establish the city’s first library. The family’s musical roots trace to Stevenson, who sang in the Second Baptist Church gospel chorus. Young’s father was a drummer in a band who brought his family on the road to shows during his childhood.

The family home became part of the airport buyout in Young’s senior year at McCluer North High School in 1995. He then served in the U.S. Army for three years, including a stint in Korea where he sang in the Army Chorus.

After returning to north St. Louis County, Young worked various jobs in a restaurant, a factory and selling guitars at Mars Music. He moved in with his grandmother Hutcherson-Rucks, who encouraged him to enroll at the University of Missouri-St. Louis at age 25. She mentored him in music theory and piano throughout his studies.

“I owe so much to her,” said Young of his grandmother, who died last year. “I remember days when she’d tell me to just keep going.”

UMSL’s College of Education has produced three of the past four Missouri Teachers of the Year. Darrion Cockrell, who teaches physical education at Crestwood Elementary School in the Lindbergh School District, won the award last year. Shelly Parks, who teaches English at Francis Howell North High School, won in 2019.

“I think it speaks very highly of the preparation they received,” said Nancy Singer, associate dean of the college. “UMSL students are not traditional students. The average age for undergrads is 26. They’ve done other things, and they’re very focused on their coursework and ready to take their next step.”

Young, 45, is Ferguson-Florissant’s first state teacher of the year since the program was developed in the 1950s by the Missouri Department of Elementary and Secondary Education. He is the second consecutive African American man to win the award, following Cockrell. It’s estimated that only 2% of public school teachers in the U.S. are Black men.

It’s important for students to see a teacher who looks like them and lived in the same neighborhoods as they do, said Young, who didn’t have a Black man as a teacher until college.

“Anyone who has a heart to teach children can teach. But there is something to say about someone who’s walked in your shoes,” Young said. “They need to see what’s possible.”

On Thursday in musical theater class, students drummed on overturned buckets while Young accompanied them on guitar as they sang pirate-themed tunes for an upcoming show. Young commanded the room with a calm and patient demeanor, never needing to raise his voice to get his students’ attention.

“Music starts with silence,” he told the class of sixth graders before they launched into the song.

Rhiley Stewart said Young is a great teacher because he makes students feel comfortable to talk about their lives.

“He’s really open with us. He takes his time, he lets us take our time,” said Rhiley, 11. “I feel like everybody is following behind his footsteps to do music in life.”

Young lives in Ferguson with his wife and their seven children, ages 3 to 15. He has been recruited by other school districts but chooses to stay in Ferguson-Florissant, where he is now in his 15th year.

“This is my home, and I want to make a difference here,” he said. “I’m called here.”

The city of St. Louis has among the lowest vaccination rates in the metro area.

Much of the language in the proposed bill is already required of school districts under public records laws.

"This year they were looking for a reprieve from the stress, and it hasn't happened."

Large donors can put universities in potentially awkward positions when faculty conclusions conflict with the interests of those benefactors.

With no solution for boosting teacher pay on horizon, Missouri turns to recruiting website

Starting pay for teachers in Missouri is $25,000 annually.

Rather than thank the Post-Dispatch for discovering the flaw, Gov. Mike Parson accused the newspaper of hacking.

Schools nationwide report an uptick in threats, fights and other behavior issues as the stress of the pandemic spills into the classroom.

James Young, a musical theater, vocal music, and guitar teacher at Johnson-Wabash Sixth Grade Center in the Ferguson-Florissant School District sits for a portrait in his classroom on Thursday, Nov. 18, 2021. Young is the first teacher from the Ferguson-Florissant School District to be named Missouri’s teacher of the year. Photo by David Carson, dcarson@post-dispatch.com