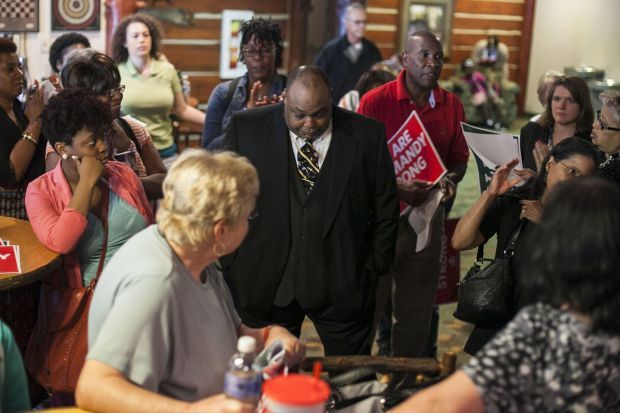 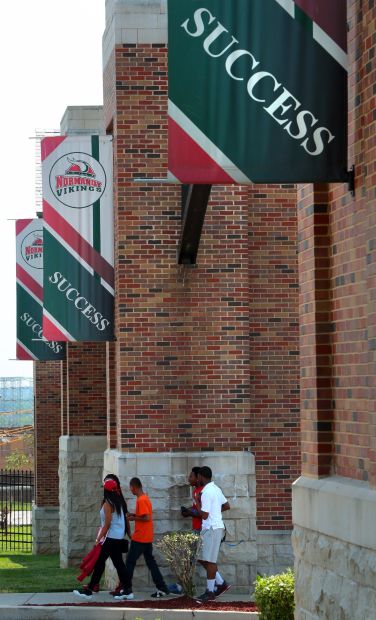 Students leave Normandy High School at the end of the day on Tuesday, May 20, 2014, after the Missouri Board of Education voted to dissolve the district and replace it with a new school system. Photo by Robert Cohen, rcohen@post-dispatch.com 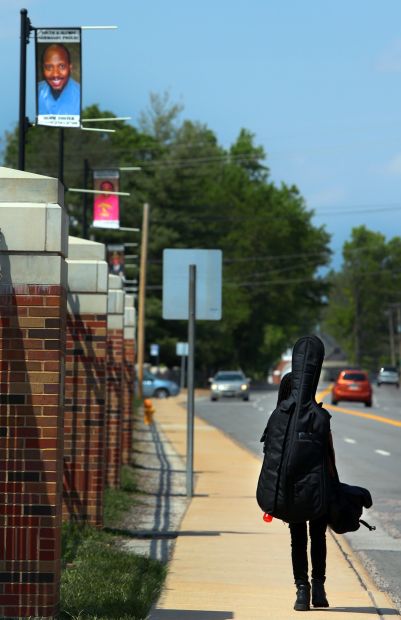 A Normandy High School music student carries her cello home at the end of the day on Tuesday, May 20, 2014, after the Missouri Board of Education voted to dissolve the district and replace it with a new school system. Banners carry the images of well-known Normandy graduates include Duane Foster, an actor and current music instructor at the school. Photo by Robert Cohen, rcohen@post-dispatch.com 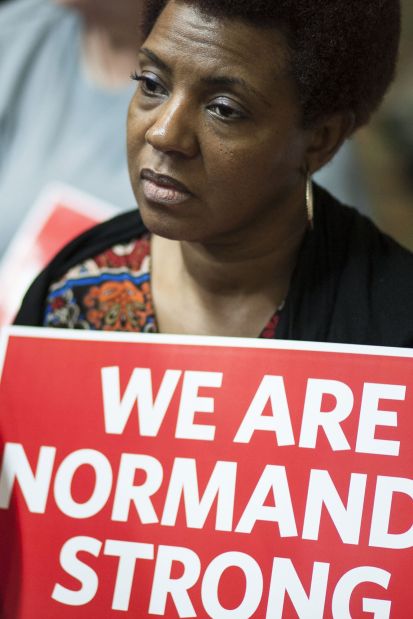 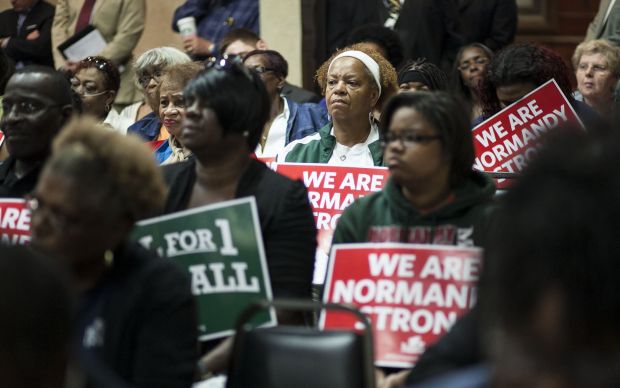 Gwendolyn Buggs, center, wearing a white headband, attends a meeting where Missouri State Board of Education members voted on the fate of the Normandy School District on Tuesday, May 20, 2014, at the Stoney Creek Inn in Columbia. Buggs was recently elected as a school district board member. Photo by Catalin Abagiu 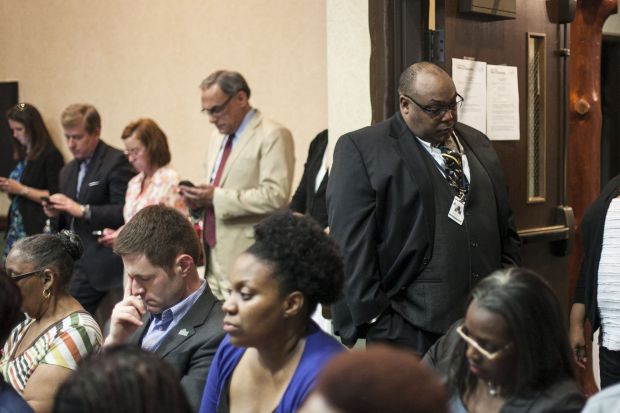 The action was a move toward a fresh start for a district on the edge of financial insolvency. But what is still unknown is the future under a transfer law that gave rise to Normandy’s crisis.

Missouri’s Education Commissioner Chris Nicastro said the vote to lapse the district and restart was the best option because it gives Normandy a chance to survive within its current boundaries.

Other ideas included breaking up the district or attaching it to others, likely leading to the loss of accreditation for districts that might take on the Normandy students. And overwhelmingly, the consensus was that the primary goal is to provide quality schools in the Normandy community, Nicastro said.

“We have a lot of bad choices in front of us,” State Board member Joe Driskill said. “But we think this is the best choice we can make right now.”

The vote calls for the district to be replaced by an entity called the Normandy Schools Collaborative. It would serve the same geographic area and be headed by a state-appointed group called a Joint Executive Governing Board. The new school system would report directly to the state.

During the vote, two school bus loads of community members, students and teacher representatives, holding red and white Normandy signs sat in the crowd. Their reaction to the recommendation was subdued, although there were groans when Nicastro said all current teacher and administrator contracts would be void after June 30.

After the meeting, the group gathered around Normandy Superintendent Ty McNichols.

They wanted to know whether Normandy would have to continue to drain money to pay the tuition and transportation of students who transfer — such as it has done for nearly 1,000 students who left the unaccredited district this year. And they also wanted to know if he would stay in the job, if offered by the new leaders.

Tuesday’s meeting ended without a clear answer to the question of student transfers — though at least in the near term the transfers would continue.

That’s because the newly formed school system would initially be unaccredited — thus making students eligible for transfers. But the State Board could change that accreditation status down the road, thus potentially cutting off new transfers.

Nicastro said the board has yet to determine what the district’s accreditation status will be on July 1.

Among the variables is the fate of a bill approved last week by the Legislature that would overhaul the transfer law. Gov. Jay Nixon has all but threatened to veto the bill because of a provision that allows vouchers for private schools for certain transfer students.

Nicastro said the department is hoping for resolution on to the transfer legislation within the next week or two.

“That will help give us a clearer path to resolving that issue,” Nicastro said.

The State Board also hasn’t made any decisions on individual contracts for Normandy employees. But Nicastro says state education leaders will work with McNichols in the next few weeks.

Nicastro also said many teachers likely would retain their positions — given that there is not enough time before the start of the new school year in August to replace the entire staff. It also would maintain some continuity, she said.

Tuesday’s vote largely followed recommendations in a report released Friday by a task force commissioned to find a way forward for the district, which lost state accreditation in 2013. Last summer, the state Supreme Court upheld a law that triggered the transfer of more than 2,200 students from both Normandy and Riverview Gardens, another unaccredited district with more solid financial footing.

“We are most concerned with the 4,000 children in Normandy — making sure they receive high-quality education,” Board President Peter Herschend said. “This is the only feasible way to have schools operating in the district next year.”

Terry Artis, a member of the elected Normandy School Board, said the vote was expected, given the task force’s recommendations.

“Of all the boards that (the state board) has appointed there has been no indication whatever that anything (it) appoints can do any better than what’s been existing,” he said.

Nicastro said her department immediately will begin to work with McNichols and other Normandy administrator to make plans to develop a 2014-15 calendar, a preliminary budget, staffing plan, contracts and address other urgent matters. After that, the next round of recommendations will include the appointment of five to seven people to serve on the joint executive governing board, with one chairman, for a three-year term. Officials said they hadn’t decided whether current elected board members would be included.

Nicastro said she has confidence that Normandy will improve, but that it will take “bold and significant change.” One of the items she thinks could work beyond the 2014-15 school year is an extended school year.

“We all want the district to be successful and that means things are going to be have to be done very differently than they’ve been done in the past,” she said. “The problem is urgent and it is ours, not just theirs. The failure is Missouri’s, not just that of a struggling community.”

What would happen to Normandy Public Schools?

It would cease to exist on June 30.

What happens to the elected school board?

It would be disbanded June 30.

What would replace the existing school district?

An entity called the Normandy Schools Collaborative, which would be governed by a Joint Executive Governing Board – a state-appointed panel.

What happens to Normandy's teachers and employees?

All contracts with employees will be terminated, effective June 30. But that's not to say many or most won't be hired back next fall. State officials have already suggested many would return.

What would be the geographic boundaries of the new school system?

The same as those from the current Normandy district.

Would the same schools remain open?

At this point, state officials say yes. But the new appointed board would have the authority to close and open schools, just like the current elected board.

What about state accreditation?

In the immediate term, the new school system would continue to be unaccredited. But the state school board could act to reconsider the accreditation status as early as next month.

Would student transfers still be allowed?

Yes, for now. By law, transfers are limited to unaccredited districts. But if the state school board changed that status, transfers may cease in the new school system.

District accuses receiving districts of charging excessive tuition and the Legislature failed to fix the situation.

About that schools transfer problem. Apparently it can’t be solved. And even if there were a solution hidden somewhere, our so-called leaders …

To the parents and children of the former Wellston School District, it must seem like déjà vu.

Paper does a disservice to neighborhoods in Normandy district

With all the coverage concerning the Normandy School District, our "crime-ridden neighborhoods" (" ‘The failure is Missouri's,’ ” May 22) and …

Evaluation of school districts is based on discriminatory numbers.

Missouri's decision to seize control of district and restart it under a new name has teachers anxious.

When state takes control of Normandy next month, it will pay significantly less.

Two years after legislation allowed charter schools to expand into Normandy or Riverview Gardens, none have come close to opening

The district seeks to save itself from lapsing, and to stop the Missouri Department of Elementary and Secondary Education from squashing its legal fight

Parents in Normandy, Riverview Gardens in limbo over changes to student transfers

Possible veto and a vote on Normandy district adds to the confusion.

Future students transfers would cease. Students who have already left may be able to continue in their new districts.

Students leave Normandy High School at the end of the day on Tuesday, May 20, 2014, after the Missouri Board of Education voted to dissolve the district and replace it with a new school system. Photo by Robert Cohen, rcohen@post-dispatch.com

A Normandy High School music student carries her cello home at the end of the day on Tuesday, May 20, 2014, after the Missouri Board of Education voted to dissolve the district and replace it with a new school system. Banners carry the images of well-known Normandy graduates include Duane Foster, an actor and current music instructor at the school. Photo by Robert Cohen, rcohen@post-dispatch.com

Gwendolyn Buggs, center, wearing a white headband, attends a meeting where Missouri State Board of Education members voted on the fate of the Normandy School District on Tuesday, May 20, 2014, at the Stoney Creek Inn in Columbia. Buggs was recently elected as a school district board member. Photo by Catalin Abagiu