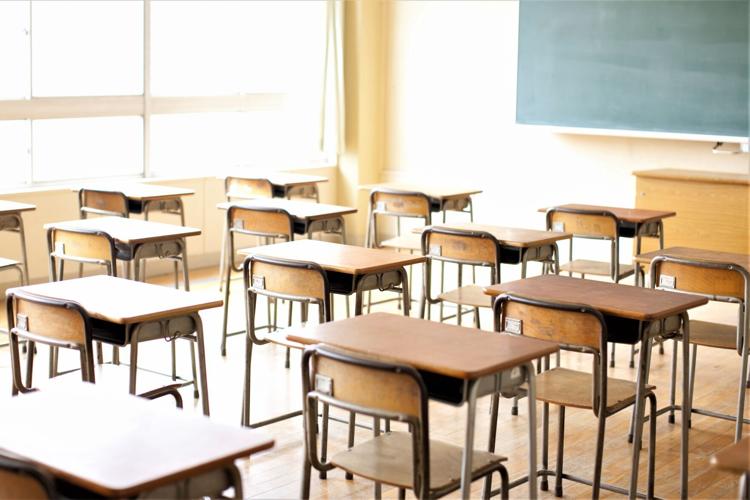 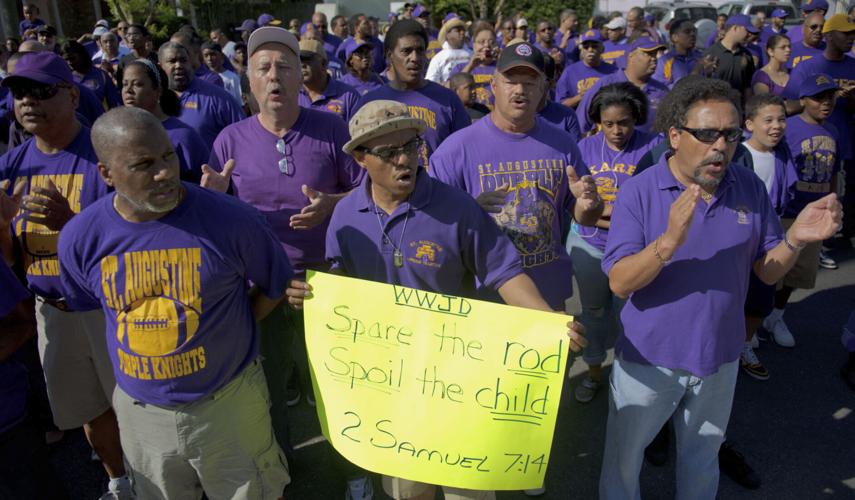 Supporters of St. Augustine High School including Byron Bernard, class of 1980, center, with “Spare the Rod, Spoil the Child” poster, demand the right of self-governance including a corporal punishment policy, march and cheer in front of the Archdiocese of New Orleans at Notre Dame Seminary Saturday March 26, 2011. A school district in southwest Missouri has decided to bring back spanking as a form of discipline for students, but only if their parents agree. Missouri and Louisiana are among 19 states that allow corporal punishment in schools.

CASSVILLE, Mo. — A school district in southwest Missouri has decided to bring back spanking as a form of discipline for students, but only if their parents agree.

The decision by the Cassville School District to resume the practice it dropped in 2001 comes as many public health experts contend corporal punishment is detrimental to children. The district’s leader said the decision was made after some parents requested it.

Classes resumed Tuesday in the Cassville district for the first time since the school board in June approved bringing corporal punishment back to the 1,900-student district about 60 miles southwest of Springfield.

The policy states that corporal punishment will be used only when other forms of discipline, such as suspensions, have failed and then only with the superintendent’s permission.

Cassville Superintendent Merlyn Johnson told The Springfield News-Leader the decision to revive corporal punishment came after an anonymous survey sent to parents, students and school employees found they were concerned about student behavior and discipline.

“We’ve had people actually thank us for it,” he said. “Surprisingly, those on social media would probably be appalled to hear us say these things, but the majority of people that I’ve run into have been supportive.”

Khristina Harkey, who has a 6-year-old son in the district, told The Associated Press on Friday that she is on the fence about the policy. The self-described “troublemaker” during her school years in California said corporal punishment got her attention when other discipline didn’t. But she and her husband did not opt-in to Cassville’s policy because her son, Anakin Modine, is autistic and would hit back if he were spanked.

“There are all different types of kids,” Harkey said. “Some people need a good butt-whipping. I was one of them. ... When I saw that ruler coming out, I was like ‘Yes sir, no sir.’”

Morgan Craven, national director of policy, advocacy and community engagement with the Intercultural Development Research Association, a national educational equity nonprofit, said corporal punishment is a “wildly inappropriate, ineffective practice that so many children still endure in their schools.”

The U.S. Supreme Court ruled in 1977 that corporal punishment is constitutional and left it up to states to set their own policies. Craven said 19 states, many in the South, have laws that allow corporal punishment in schools. The most current data from 2017-18 shows about 70,000 children in the U.S. were hit at least once in their schools.

Students who are hit at school do not fare as well academically as their peers and are exposed to humiliation, along with physical and psychological trauma, Craven said. In some cases, children are hurt so badly that they need medical attention.

“If you have a situation where a kid goes to school and they could be slapped for, you know, some minor offense, it certainly creates a really hostile, unpredictable and violent environment,” Craven said. “And that’s not what we want for kids in schools.”

Sarah Font, an associate professor of sociology and public policy at Pennsylvania State University who coauthored a 2016 study on the subject, said the practice is falling out of favor with public health officials and researchers because it doesn’t improve a child’s behavior in the long term.

“And there’s reasons to believe that it’s, in the long term, harmful for kids’ overall development and functioning,” Font said. “And so really, I think it’s a question of not just are there harms, but there’s no evidence of benefit.”

“It just seems like a really high-risk practice for a school to intentionally seek out,” she said.

Her research found that districts using corporal punishment are generally in poor, Republican-leaning rural areas in Southern states. Font said Black children are disproportionately subjected to it, in part because the policies are more commonplace in districts with higher minority populations.

Craven also pointed to racial bias that leads people to view the behavior of Black students differently from other students.

Cassville School District spokeswoman Mindi Artherton was out of the office Friday and a woman who answered the phone in her office suggested reading the policy. She said staff had already done interviews. “At this time, we will focus on educating our students,” she added, before hanging up.

The policy says a witness from the district must be present and that the discipline will not be used in front of other students.

“When it becomes necessary to use corporal punishment, it shall be administered so that there can be no chance of bodily injury or harm,” the policy says. “Striking a student on the head or face is not permitted.”

In Missouri, periodic efforts to ban corporal punishment in schools have failed to gain traction in the Legislature.

A spokeswoman for Missouri’s K-12 education department said the state does not track which school districts allow corporal punishment because those decisions are made at the local level.

School leaders said they were shocked by the decision and looking for ways to stay open next year.

Rosati-Kain and St. Mary’s are among the smallest in the archdiocese.

Kirkwood administrators banned 14 books in response to a new state law, the third-most of any school district in St. Louis County after Rockwood and Lindbergh.

It’s at least the second legal challenge this week to the sweeping proposal laid out by President Joe Biden in late August.

Librarians have scoured books for any applicable content at the direction of lawyers. Ten districts in St. Louis and inner suburbs are ignoring the law.

Goats get in the weeds at Crossroads College Prep in St. Louis

Five goats spent a week clearing out invasive weeds from the school’s rain garden, while students researched their work.

Supporters of St. Augustine High School including Byron Bernard, class of 1980, center, with “Spare the Rod, Spoil the Child” poster, demand the right of self-governance including a corporal punishment policy, march and cheer in front of the Archdiocese of New Orleans at Notre Dame Seminary Saturday March 26, 2011. A school district in southwest Missouri has decided to bring back spanking as a form of discipline for students, but only if their parents agree. Missouri and Louisiana are among 19 states that allow corporal punishment in schools.