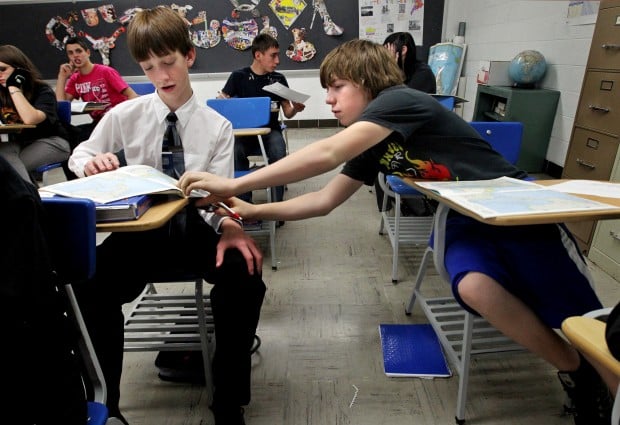 Freshman Travis Oden, (left) receives some help from classmate Caleb Forbis during geography class on Friday, Feb. 03, 2012, at Montgomery County High School in Montgomery City, Mo. The rural school district 90 minutes west of St. Louis is among a growing number in the state that has turned to four-day school weeks to cut costs.  "I have more time to do my work on Mondays," said Oden, who wore a tie for the basketball court dedication later on that evening. Photo by Laurie Skrivan, lskrivan@post-dispatch.com 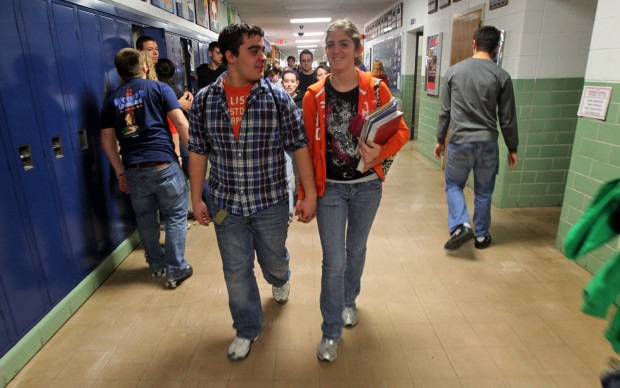 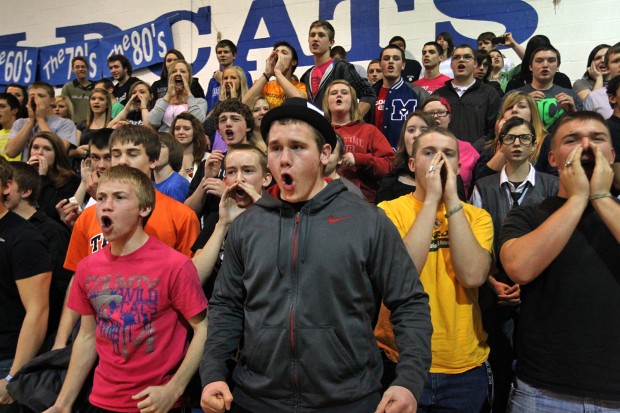 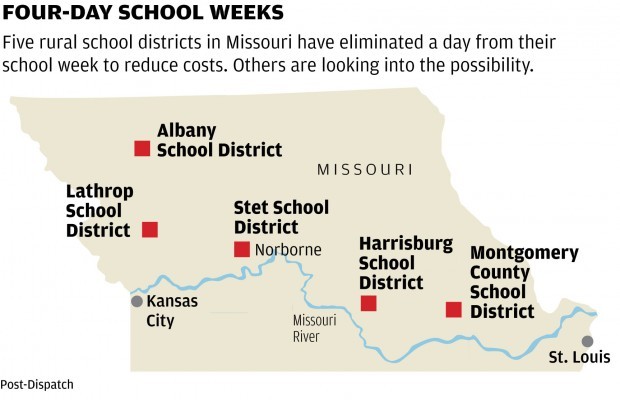 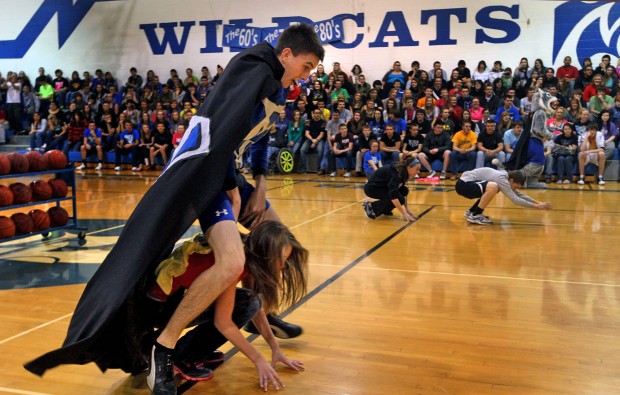 MONTGOMERY CITY, Mo. • When students in Montgomery County schools returned to class last fall, they began doing what some had only dreamed of: skipping school on Mondays.

And with the superintendent's permission.

The school system about 80 miles west of St. Louis is among a small but growing number of rural Missouri districts that have eliminated one day from the school week. The reason? To save money.

The result is an estimated $150,000 in annual savings that otherwise would be spent on custodial services, school lunches and diesel fuel. As some districts struggle to make ends meet, a few have instigated cost-cutting measures that would have been unthinkable five years ago.

More than 100 school districts nationwide have turned to a shorter school week to avoid eliminating programs and teachers, according to the U.S. Department of Education. And the districts are reporting benefits that go beyond cost savings. Students are more attentive, less tired, and less likely to stay home, the districts report. Teachers are also less likely to be absent.

Nevertheless, a four-day week hasn't been an easy sell.

"It's really thinking outside the box," said Jeremy Covey, principal of Montgomery County High School. "Schools have always been five days a week. School boards are resistant to (four days) for many reasons."

Smaller, rural districts have less budgetary wiggle room than larger, suburban and urban systems. Cutting staff could mean dismissing a school's only fourth-grade teacher. Cutting a bus route could mean leaving students 10 miles from school without the means to get there.

In the case of Montgomery County, eliminating school on Mondays was enough to save several staff positions. The School Board vote was 6-1, and it left the community divided.

"People were really argumentative about it," said Angie Francois, who has two sons at Jonesburg Elementary. "It was really causing a lot of hard feelings."

Students in the 1,300-student district now spend about 50 minutes more in school each day. They also no longer leave early some Wednesdays so teachers can have professional training time. This results in more hours spent in class at most of the schools this year than last.

Francois said her sons can now go to doctor appointments without having to miss school. And on Mondays, when she and her husband are working, they stay with their great-grandmother.

"We love it," Francois said.

But the schedule also has left some parents with the burden of finding child care. Fearing a child care crisis, three area churches opened their doors to "Monday school" for children needing supervision — only to find little demand.

"The need didn't appear to materialize like we thought it would," Superintendent Michael Gray said.

The Missouri Legislature has welcomed the concept of four-day school weeks, passing a bill in 2009 that authorized school districts to make the switch.

Since then, Montgomery County and four other Missouri school districts — Albany, Harrisburg, Lathrop and Stet — have done so. Their superintendents are fielding calls from other school systems considering the move.

Because of that interest, the four-day week will be the subject of a workshop at the Missouri Association of Rural Education conference this month. In Montgomery County, surveys show support for the concept has grown.

In October, 73 percent of parents expressed some degree of support for the shorter week, up from 41 percent last spring, according to survey results on the school district's website.

Jamie Galarza was among the skeptics.

"I was worried that their education would suffer," she said of her sons in elementary and middle school. But the three-day weekends have helped them focus, Galarza added. Now, "They are more enthusiastic about going to school."

Across the district, reports show that student attendance is up. Teacher absences are down. And as a result, the district is saving even more money by hiring fewer substitute teachers.

Some students say it's actually helping their grades.

The overall effect on academics is unknown. Lathrop, in northwest Missouri, was the first district in the state to use a shorter week in 2010-11. The others are in their first year.

Fewer days in school is contradictory to what some educators are pushing in urban areas, where some schools have adopted longer days and even Saturday classes for children who have fallen behind.

Some public schools in St. Louis offer tutoring before and after school for children who need it. Saturday school is also a growing trend. The Knowledge is Power Program, a national network of high-performing charter schools known as KIPP, has children in class from 7:30 a.m. to 5 p.m. daily, and half days on Saturday mornings.

"This is a big change," said Lynn Proctor, superintendent of Harrisburg School District north of Columbia. But, "We felt we had done enough legwork and research that we had compelling evidence that this would not negatively impact our students."

In Montgomery County, school officials have committed to the four-day school week for two years. If test scores and other measures indicate a negative effect on student learning, they will re-evaluate.

"The telltale sign will be achievement," Montgomery County Superintendent Michael Gray said. "Are test scores the same or going up?"

Eye tests at center of dispute in Jefferson City

Optometrists want to keep requirement for exam, while some want to change law.

Missouri teachers could be evaluated on student progress

The change in the process could prove unpopular with educators, who say standardized tests measure students, not teachers

Freshman Travis Oden, (left) receives some help from classmate Caleb Forbis during geography class on Friday, Feb. 03, 2012, at Montgomery County High School in Montgomery City, Mo. The rural school district 90 minutes west of St. Louis is among a growing number in the state that has turned to four-day school weeks to cut costs.  "I have more time to do my work on Mondays," said Oden, who wore a tie for the basketball court dedication later on that evening. Photo by Laurie Skrivan, lskrivan@post-dispatch.com