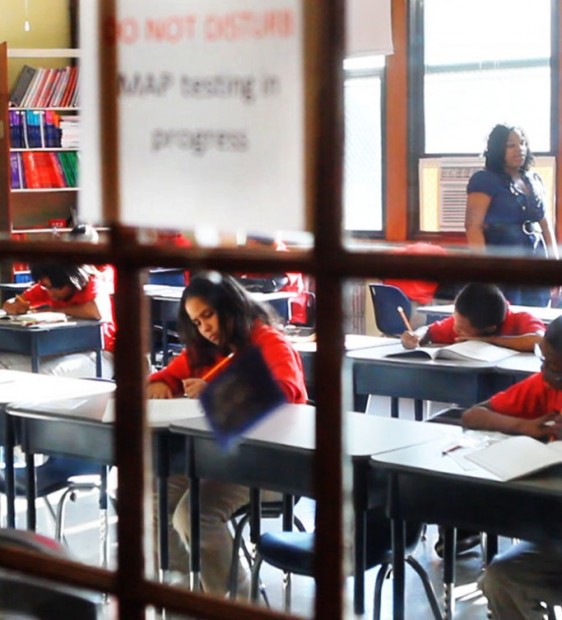 Fifth-grade students in a classroom during MAP testing at KIPP Inspire Academy in St. Louis on April 15, 2010. Photo by Emily M. Rasinski of the Post-Dispatch 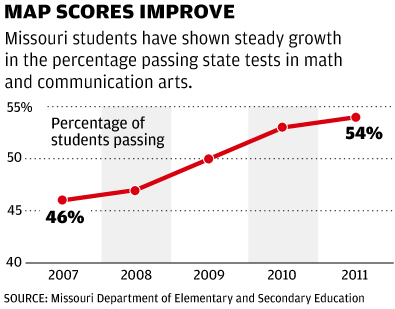 More students in schools throughout Missouri and the region passed the state's annual tests this spring, marking another year of slow and steady progress — and another year of failure to meet rising federal goals.

Fifty-four percent of the state's students passed their math tests last spring, and 55 percent passed English tests, according to preliminary results of the Missouri Assessment Program made public today.

"Any time you're looking at trend data, you're looking for sustainability," said Margie Vandeven, assistant commissioner of education for the Missouri Department of Elementary and Secondary Education. "This is a sustainable trend. This is something the state needs to be proud of."

Yet schools across the state struggled and failed to meet state benchmarks required by federal law. The benchmarks rise each year until 2014, when all students are required to pass the tests.

Overall, the region's schools also continued to improve, with combined English and math passing rates increasing by 2 percentage points this year, to 55 percent — just a notch above the statewide figure.

Lindbergh, Clayton, Ladue and Kirkwood school districts took top honors again, with more than 76 percent of their students passing the math and English tests. Lindbergh's rates, at 79 percent, were the highest in the region and the second-highest combined total in the state, behind the one-school elementary district of Davis, in rural Clinton, Mo.

Six city charter schools, all run by the Virginia-based Imagine Schools Inc., posted the lowest combined passing rates in the region, and among the lowest in the state. Just 7 percent passed at Imagine Academy of Academic Success.

The test scores are especially important to school districts that are struggling to retain or regain their accreditation. In St. Louis Public Schools more than half the 69 schools that posted scores improved their passing rates on both English and math tests, and 84 percent improved in at least one subject.

In total, 31 percent of the students in the unaccredited city schools passed the tests, up from 28 percent last year.

Yet the district of more than 23,000 students still fell short of state goals, as well as its own targets, making it unlikely to regain accreditation this year.

"I'm glad we're showing progress, but I can't say I'm satisfied," St. Louis Superintendent Kelvin Adams said. "I know without a shadow of a doubt that slow, steady progress means it's much more likely to be long-term. But you still want to see growth take place faster when you recognize and realize where this district is."

Results were mixed in Riverview Gardens Schools in north St. Louis County, an unaccredited district where the state took over last summer. The district reported growth in five schools in nine areas.

Normandy and Jennings school districts — both provisionally accredited — also showed mixed results but overall improvement. In Normandy, which took in students this past school year from the now-defunct Wellston district, passing rates rose by 3 percentage points — yet only a quarter of its students passed the math and English tests this year. Jennings rose by 2 percentage points, with fewer than a third of students passing those subject tests.

"We've made quite a bit of change not only in terms of staffing but programs," Normandy Superintendent Stanton Lawrence said. "This coming year is the year we have to expect to deliver in a way that's pretty substantive."

The numbers released today are not final. School officials in many districts plan to appeal them.

In the last decade, educators have increasingly used standardized test scores as a way to measure how well schools are doing in their states and across the nation. Some school districts now use test results as one way of evaluating teachers. Critics say this can encourage cheating scandals such as the one exposed in Atlanta this summer.

Some argue that the federal No Child Left Behind law contributes to that pressure. The law penalizes schools and districts when scores fall short of targets. The overall student body must meet the targets, but so must each group of students, identified by ethnicity, family income and special education. If one group fails, the district falls short.

As a result, it has become increasingly common for even the best districts to miss the mark, failing to achieve "adequate yearly progress."

This year, just 16 percent of the state's 500-plus districts met the standards, Vandeven said. Brentwood is the only suburban district that met the progress goal this year.

"That is becoming a very challenging target, not only in Missouri, but across the nation," said Randy Smasal, associate superintendent of learning at Rockwood School District. There, 73 percent of students passed the English and math tests combined.

Missouri and other states are moving to replace or ignore aspects of the federal law to develop their own accountability systems for schools.

For the second year, the Missouri education department is playing down federal standards, and instead promoting its annual performance reports as a more accurate measure of schools and districts.

The reports consider 14 areas, such as ACT scores, attendance and graduation rates, and Advanced Placement courses, and factor into school district accreditation. Those reports are expected later this month.

Illinois plans to release its test scores in October.

Jessica Bock of the Post-Dispatch contributed to this report.

Educators hope assigned reading, other tasks will allow children to return to school with skills intact.

How does your school stack up?

Barack Obama Elementary represents hope for a district on the edge of losing state accreditation.

States seeking to abandon No Child Left Behind

HELENA, Mont. • As hundreds of schools in Helena and across the nation faced being labeled failures under the federal No Child Left Behind law…

This year's average composite score in Missouri was 21.6, half a point higher than the national average of 21.1.

Teacher, 93, is honored by district she started working in before WWII.

Students who take the SAT or ACT will have to submit photos of themselves when they sign up for the exams, under new security measures announced Tuesday.

Performance on MAP tests by district

Search by school district to see the percentage of students who passed Missouri Assessment Program math and English tests in 2009, 2010 and 2011.

With apologies to the former presidents, leaders in the Normandy School District decided to scrap the holiday, along with two other scheduled days off.

Fifth-grade students in a classroom during MAP testing at KIPP Inspire Academy in St. Louis on April 15, 2010. Photo by Emily M. Rasinski of the Post-Dispatch