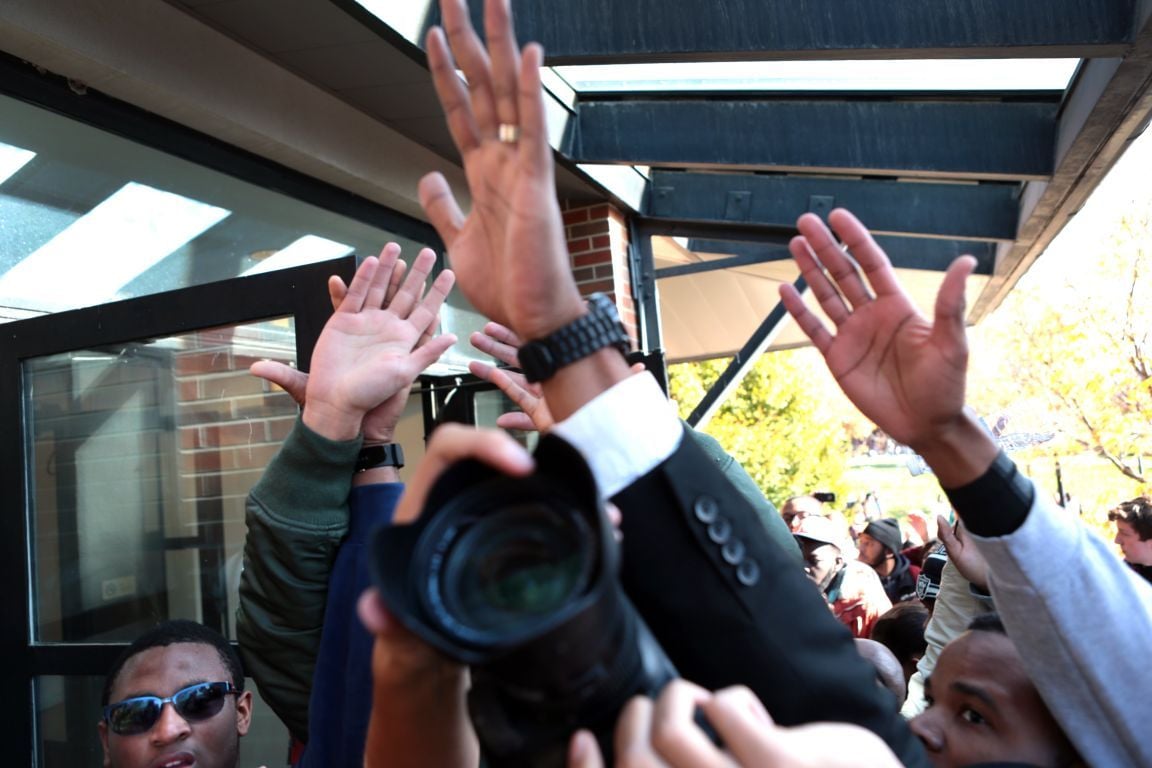 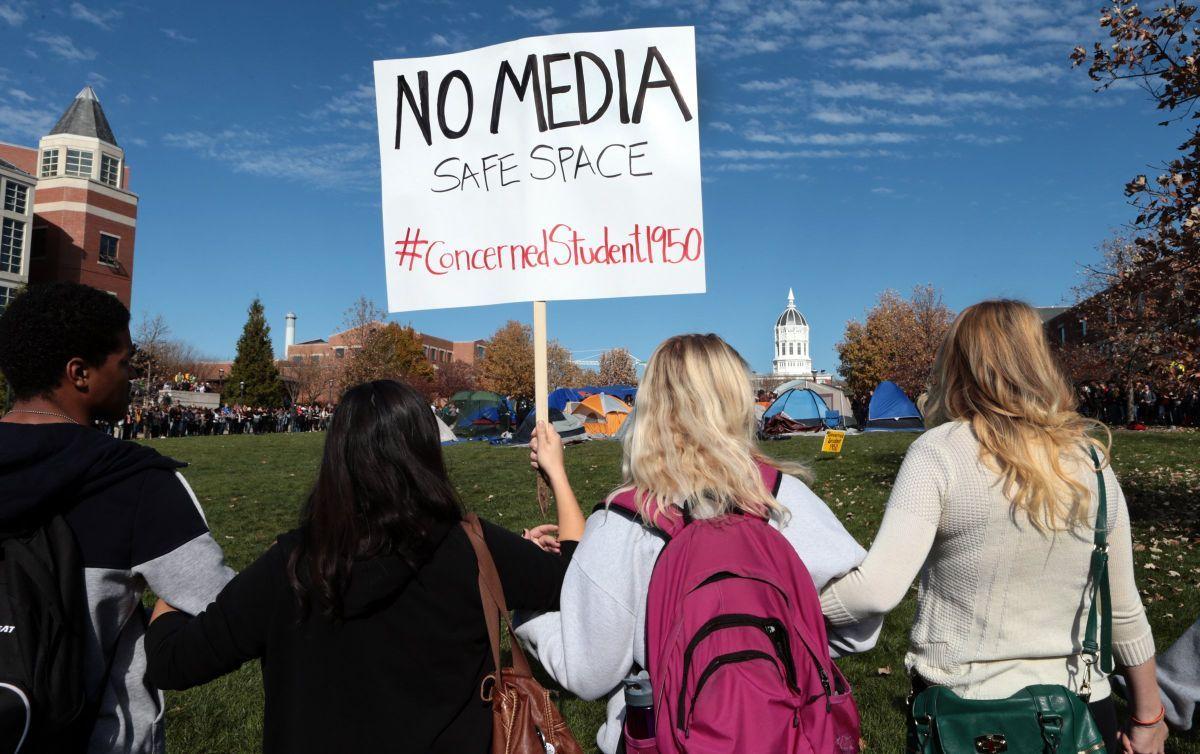 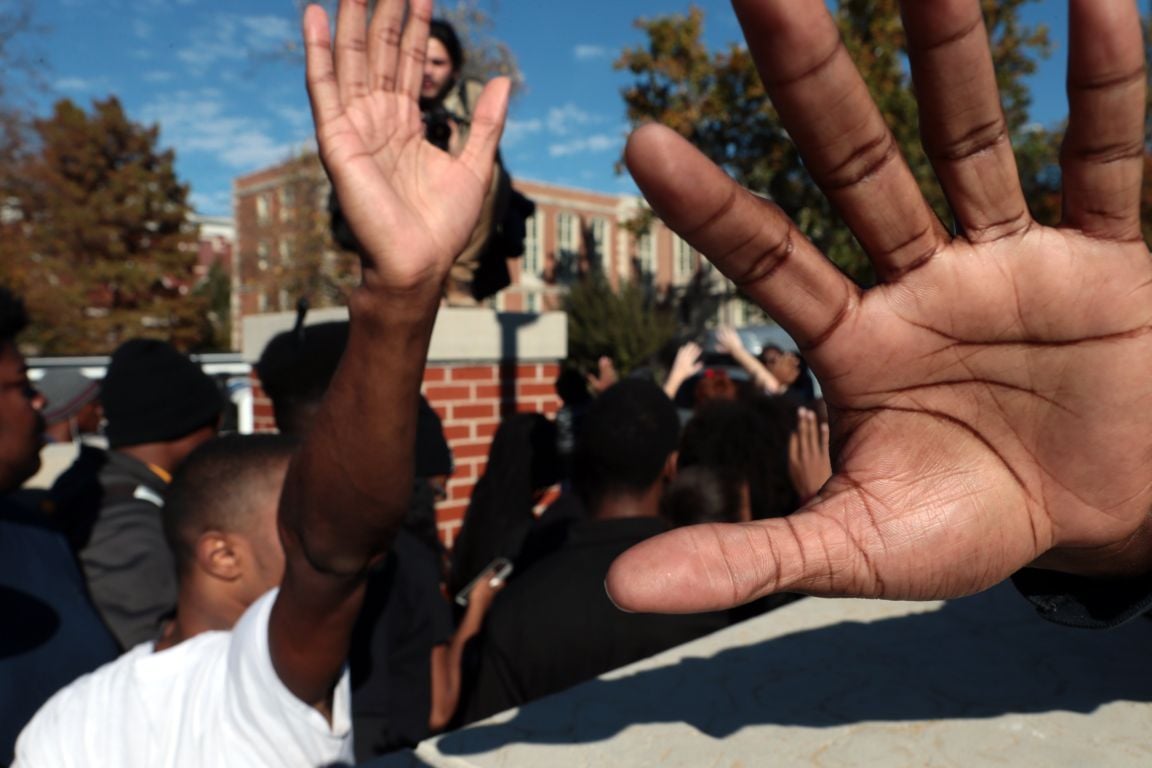 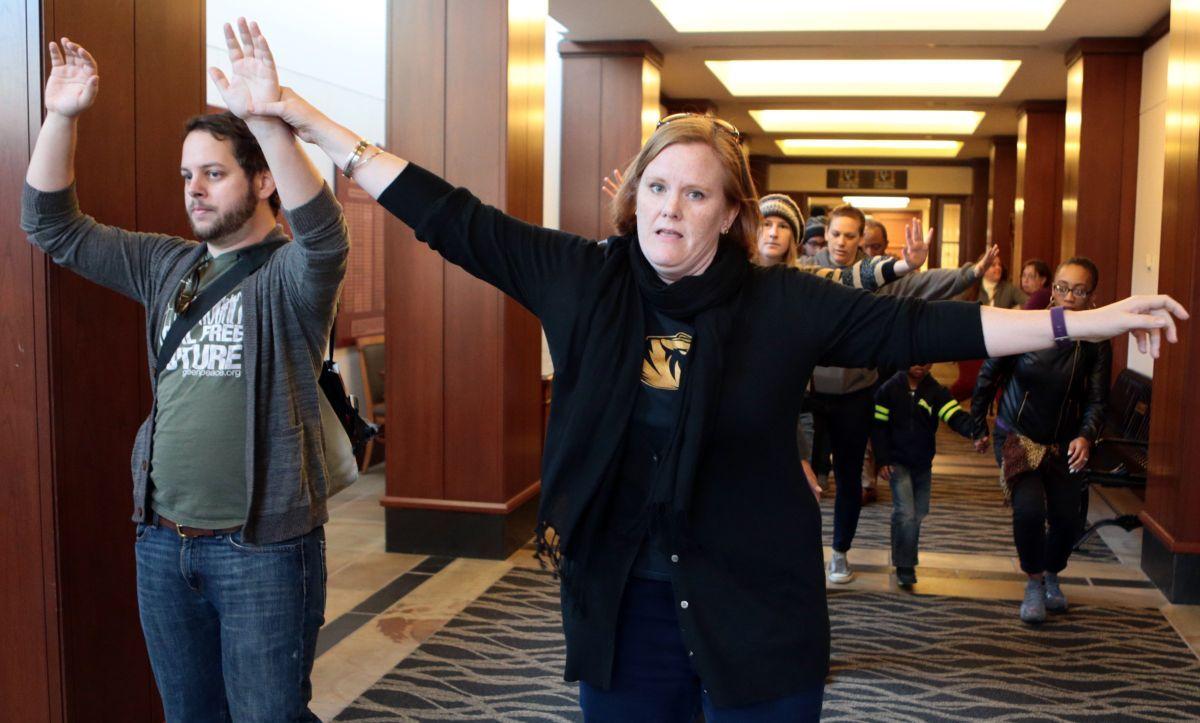 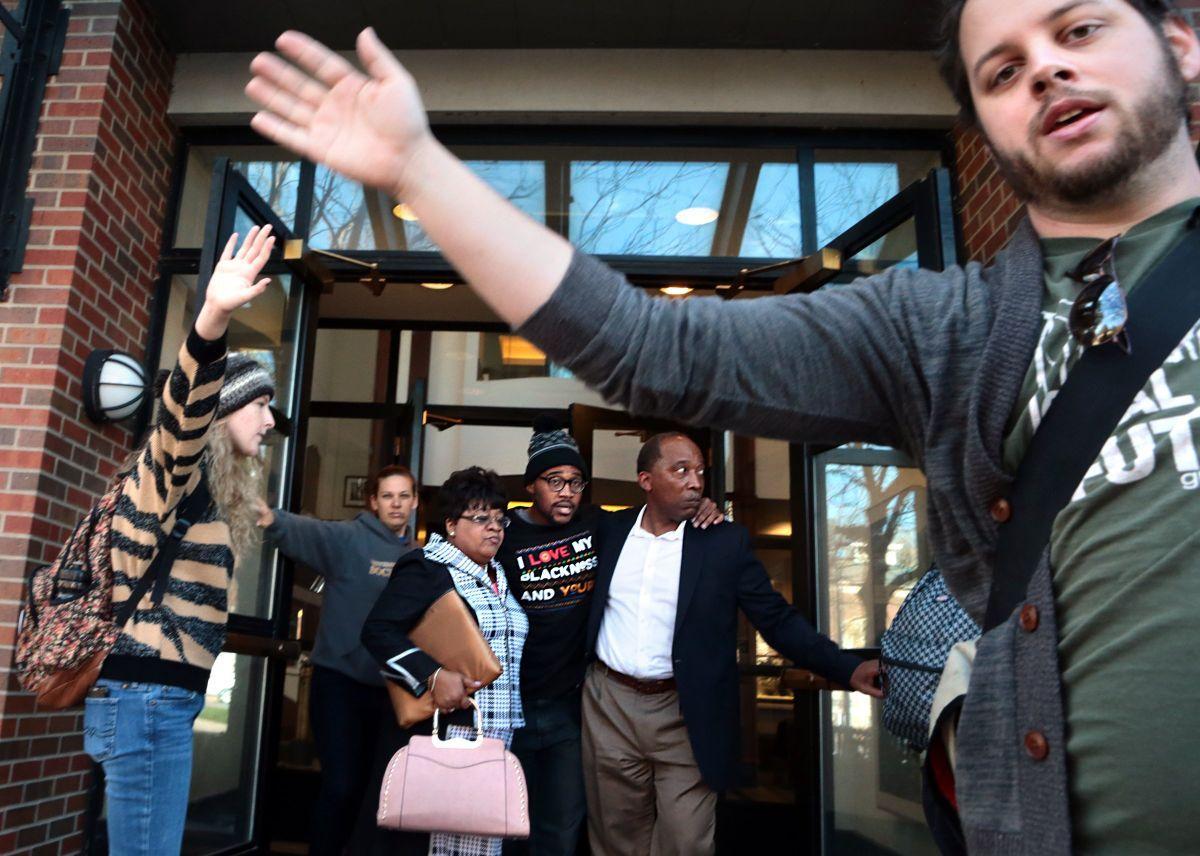 Students block cameras as graduate student Jonathan Butler is helped to a car by family members and taken to a hospital after ending his hunger strike following the resignation of University of Missouri President Timothy M. Wolfe on Monday, Nov. 9, 2015. Photo by Robert Cohen, rcohen@post-dispatch.com

News reporters and photographers covering the protests at the University of Missouri-Columbia, one of the top journalism schools in the nation, found their efforts at times blocked by the very protesters whose story they were trying to tell on Monday.

Protesters formed a circle in the Carnahan Quadrangle to block members of the media from students who had set up tents there. The protest group, Concerned Student 1950, tweeted: “We ask for no media in the parameters (sic) so the place where people live, fellowship, and sleep can be protected from twisted insincere narratives.” They then posted a video of a sign that said, “NO MEDIA SAFE SPACE.”

Mark Schierbecker, a history and German student from Rock Hill, said that after the announcement was made that UM System President Timothy M. Wolfe resigned, protest leaders asked media to leave the encampment so they could strategize.

A student line around the encampment grew bigger, and the protesters told journalists to step back. Some organizers threatened to call police on the media if they refused, he said. Some of the supporters included faculty members, he said.

“The First Amendment protects your right to be here, and mine,” Tai tells the protesters.

At the end of the video, Schierbecker himself talks with a woman, later identified as MU assistant professor of mass media Melissa Click, and she tells him to leave and grabs his camera. He says he does not have to leave.

“Who wants to help me get this reporter out of here?” she calls out. “I need some muscle over here.”

Schierbecker said several people then pushed him to the end of the circle.

Janna Basler, director of Greek life and leadership on campus, is also seen in the video confronting Tai. When he asks her name, she says, “I am Concerned Student 1950.”

She also did not respond to a request for comment Monday night.

Tai said he didn’t feel any ill will toward the protesters and supporters for what happened. He said he saw many other reporters and photographers blocked by protesters with hands, jackets, papers and posters and forced back physically.

Post-Dispatch photojournalist Robert Cohen was also on the MU campus covering the protest Monday. He called it “the strangest victory party I’ve ever seen. It was a victorious day for the protest, and they didn’t want it recorded.”

“As photographers, we see this sort of treatment or heavy-handedness when somebody’s coming out of a courthouse after they’ve been handed a felony.”

Columbia Missourian reporter Jack Witthaus, of Kirkwood, said he saw faculty members escalate the situation. Some would not identify themselves when asked, said Witthaus, a former Post-Dispatch intern.

Witthaus pointed out that the issues being raised affect faculty as well as students.

“Where there’s a group that’s marginalized, that’s where the media comes in, (we) can tell their stories, and maybe find a way to change what’s going on,” he said.

Tai also wants to promote understanding of the journalists’ role.

“This is a historic situation,” he said. “Journalism has to document history. It’s about this modern civil rights movement that is happening across America.”

Tom Warhover, a journalism professor and executive editor at the Columbia Missourian, said he’s proud of Tai for keeping his cool.

Warhover said the opposition the media faced on Monday wasn’t the story. “This is not an end. This is a moment, one of a series of moments,” he said.

He hadn’t thought much about initiating a public conversation reviewing First Amendment rights on campus, he said. “I’m too busy putting the paper together tonight.”

Hostility between journalists and protesters became a notable side story Monday but cooled Tuesday.

Director of Greek life at Mizzou placed on administrative leave

She clashed with media trying to cover the student protests in November.

Editorial: When everyone's a victim, no one is a victim

'Affluenza boy' as the symbol of America's new victimhood culture.

Clash between media and ConcernedStudent1950 (full)

Students block cameras as graduate student Jonathan Butler is helped to a car by family members and taken to a hospital after ending his hunger strike following the resignation of University of Missouri President Timothy M. Wolfe on Monday, Nov. 9, 2015. Photo by Robert Cohen, rcohen@post-dispatch.com