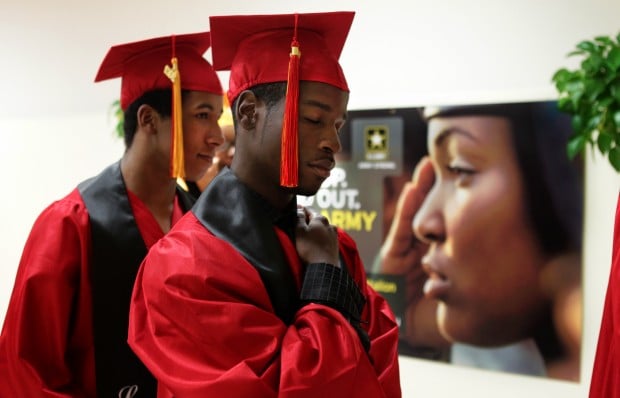 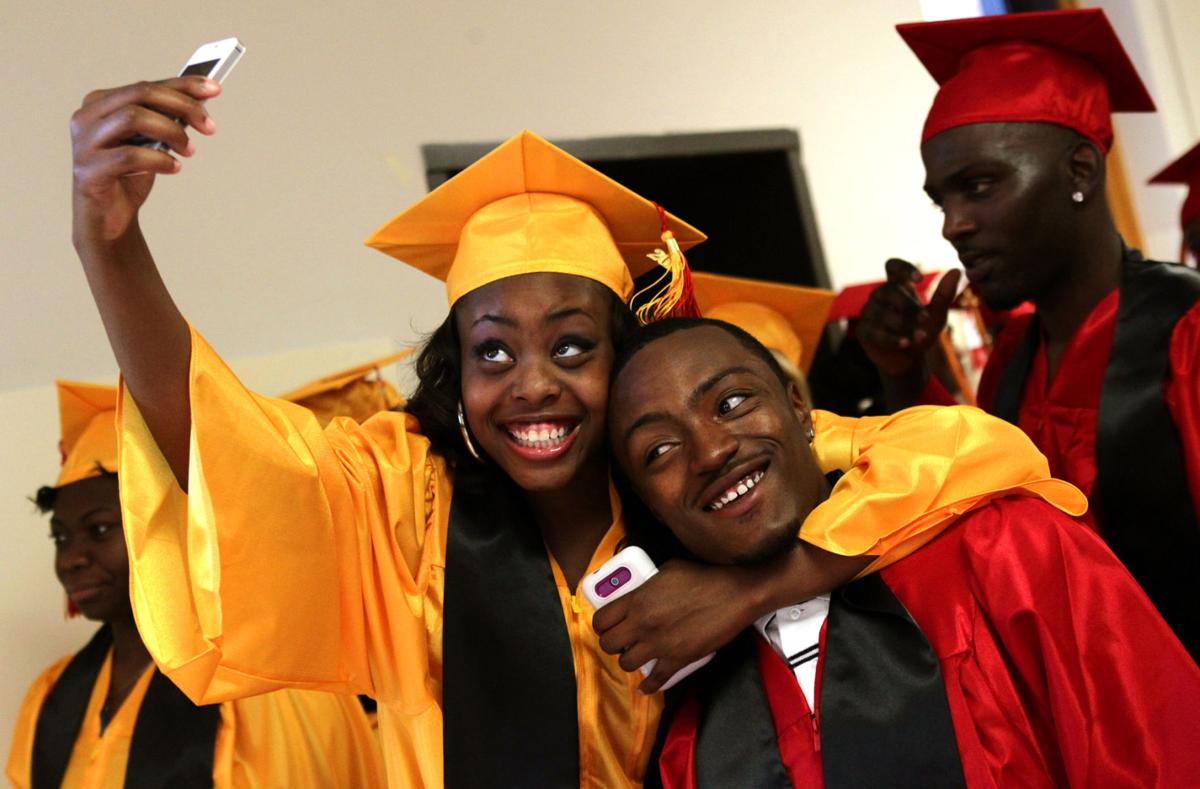 Lift for Life Academy seniors Marissa Robinson and Tre Minner take their pictures while awaiting the procession of 72 members of the inaugural class who graduated Tuesday May 15, 2012 at Harris Stowe State University. Photo by Robert Cohen, staff photographer

JEFFERSON CITY • A bill that could expand charter schools statewide while making it easier to weed out underperforming ones is headed to the governor's desk.

The Missouri House passed the bill Tuesday on a vote of 99-54. The Senate passed it earlier, 31-2.

Gov. Jay Nixon has called for tougher accountability standards for charter schools but has not said whether he favors expanding them. The governor has until mid-July to sign or veto the bill. If signed, it would take effect Aug. 28.

Charter schools are independent public schools, funded by taxpayers but freed from district regulation and encouraged to experiment with curriculum. Currently, they are confined to St. Louis and Kansas City.

Supporters said letting the nontraditional schools spread throughout the state would spur innovation in classrooms and give parents more choices.

Other provisions in the bill — for example, requiring charter schools to sign formal performance contracts — are intended to help the state avoid surprises such as the sudden closure this year of six deficient charter schools in St. Louis run by Imagine Schools Inc.

Opponents said charter schools, as a group, had performed no better than the traditional public schools in their districts. In some cases, their academic performance was worse.

"We need to look at this before we expand the pool of what we're trying to do," said Rep. Clem Smith, D-Velda Village Hills. He said for-profit charter school management companies such as Virginia-based Imagine "get the money first" before leaving town.

If Nixon signs the new legislation, charter schools could be established in any school district that loses accreditation and, after a three-year waiting period, in districts that are provisionally accredited and not making progress toward accreditation.

Charter schools also could be set up in accredited districts, but only when established by the local school board. Also, if the district had at least 1,550 students, no more than 35 percent could be enrolled in a charter school.

The most immediate impact of the changes could be in the Riverview Gardens School District, which has been unaccredited since 2007.

Jeff Weiner, a 1977 graduate of Riverview Gardens High School, has been waiting for the legislation to pass and is readying his charter school application.

He said Tuesday that he hopes to operate an elementary school — starting with kindergarten, first and second grade — and a middle school, starting with sixth grade, in Riverview Gardens. He would add grades as the children advanced. He said the school would be located at a parochial school's building in the district.

Weiner, who has worked to set up charter schools or the framework for them in four states, plans to seek sponsorship from a new entity established by the bill: a nine-member Missouri Charter Public School Commission that would be appointed by the governor.

"We believe with the strength of our application they'll fast-track it," he said.

Each charter school is required to have a sponsoring organization — usually a nearby college or university now. The bill would expand the list of potential sponsors to include the new statewide commission and any two-year private vocational or technical school — such as Ranken Technical College in St. Louis.

The State Board of Education would evaluate and approve new sponsors. They would be reviewed every three years.

The fuzzy role of sponsors was part of the problem with the Imagine schools, said Douglas Thaman, executive director of the Missouri Charter Public School Association.

Under the bill, a sponsor could set detailed targets for attendance, academic progress, graduation rates and the like.

"You can put in place measurable goals that have to be met," Thaman said. Schools would be evaluated every other year to allow time to fix problems or plan a closure.

Rep. Mike Thomson, R-Maryville, called the measure a compromise that doesn't threaten rural districts because as long as they stay accredited, a school board would be the only entity that could approve a charter school in the district.

While the changes neutralized school administrators' groups, teachers' organizations remained opposed. They said the state should make sure its accountability standards work before expanding charter schools.

"It's such a Wild West, barely regulated environment," said Otto Fajen, who lobbies for the Missouri National Education Association.

Another concern, he said, is that teachers at charter schools lack the due process protections that require traditional public schools to file written charges and grant a hearing before a veteran teacher is fired. The bill has long been a priority of Republican legislative leaders, who have struggled to pass more sweeping bills eliminating teacher tenure.

The GOP has worked closely on the bill with some urban Democrats, such as Rep. Tishaura Jones, D-St. Louis. Jones said Tuesday that charter schools weren't "a silver bullet," because schools still must deal with problems related to poverty and lack of parental involvement.

But the bill takes a "huge step forward to holding schools accountable," she said. When her son starts school this year, "I'm going to put my money where my mouth is and put him in a charter school."

Also supporting the bill were the Missouri Chamber of Commerce & Industry; StudentsFirst, a national advocacy organization; and the Missouri Education Reform Council, a group supported by retired investor Rex Sinquefield of St. Louis.

Some of the groups wanted fewer strings on expansion, among other things that didn't make the final bill.

"I call it charter school light," said Joe Knodell, who lobbies for the Missouri Education Reform Council. "It's better than nothing."

If there was one piece of education business that the Missouri Legislature should have finished before it ends its session Friday, it was not …

Superintendent Linda Henke's approach contradicted what other struggling school districts were doing in the wake of the federal No Child Left Behind law.

Officials hope a temporary fix to the school funding formula will defuse an explosive battle.

JEFFERSON CITY • School choice advocates won one and lost one today when Gov. Jay Nixon announced that he will use his pen to sign one educati…

Shearwater High School's founder created the school in north St. Louis armed with her own experience as a troubled teen and school dropout.

Charter schools must focus on academics and fiscal responsibility

A bill approved by the Missouri House and headed to the governor would expand where charter schools could operate. Under SB576, charter school…

The bill, passed by the Senate, would allow charters in any unaccredited district.

Missouri's state school board plans to hold a hearing to decide whether to yank sponsorship authority from university, which regulates 6 Imagine schools in St. Louis.

JEFFERSON CITY • A bill allowing charter schools to be established statewide in Missouri got a new lease on life Wednesday.

Lift for Life Academy seniors Marissa Robinson and Tre Minner take their pictures while awaiting the procession of 72 members of the inaugural class who graduated Tuesday May 15, 2012 at Harris Stowe State University. Photo by Robert Cohen, staff photographer