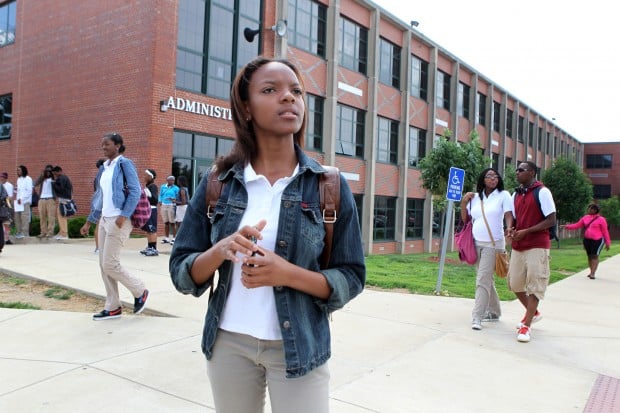 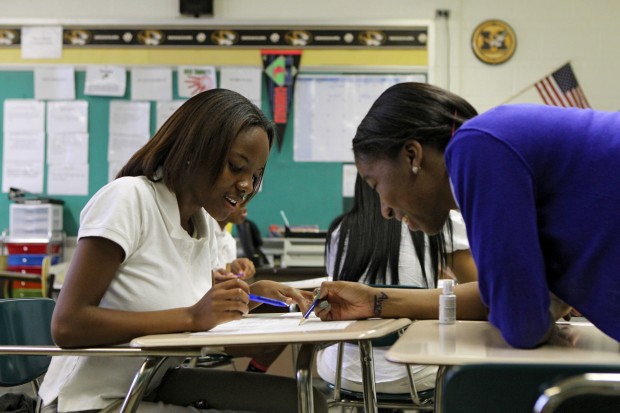 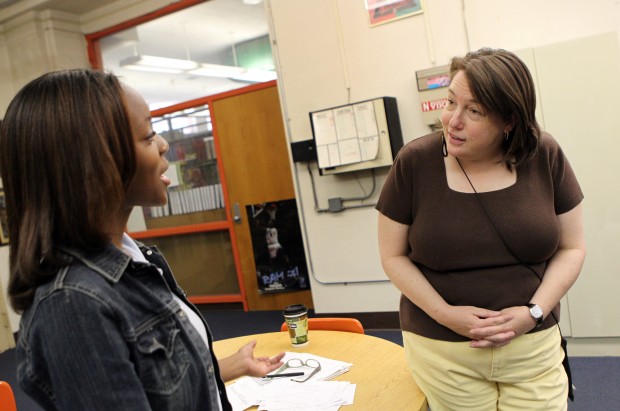 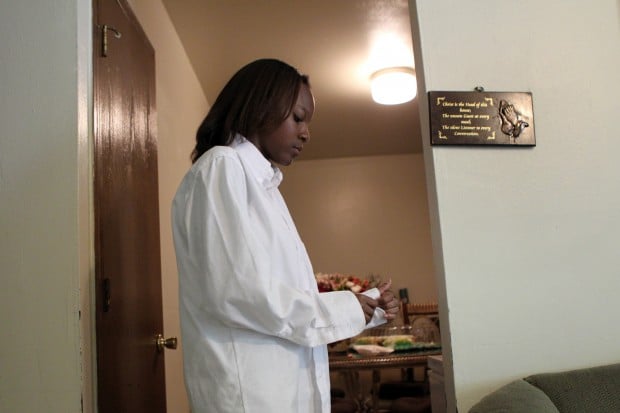 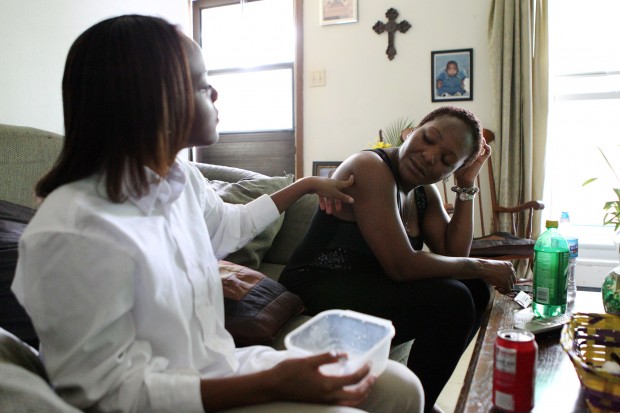 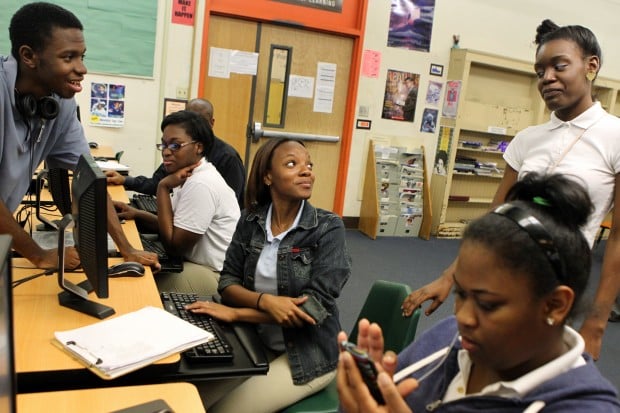 She's spent much of her childhood in and out of homeless shelters. She's attended more schools than she can easily keep track of — most of them struggling urban schools where disruptions and low expectations are the norm.

But visions of the Ivy League have motivated this high school senior since she was 13, when she became captivated by a character's similar quest on the television drama "Gilmore Girls." This fall, she'll fulfill her goal by heading to Columbia University on a full scholarship.

Eboni's story in many ways is like those of many children in urban schools. It's one filled with obstacles of poverty that many never overcome. But her ascent to the Ivy League illustrates what is possible, even at the most challenged schools, when students have a mind-set different from their circumstances.

"Seeing the absolute worst of life is the ultimate motivation," she said.

At home, Eboni has a supportive mother who dropped out of high school and hasn't always related to her ambitions. At Normandy High, the petite 17-year-old is one of about 25 honor students among a student body with a dropout rate in the double digits. Last year, 74 percent of students there failed the state's English 2 exam, and 83 percent failed the math exam.

Eboni's circle of friends is small. This is by choice, she says. She's not interested in the music or the clothes that dominate her school's culture. She is a varsity cheerleader but would rather be at church than at parties.

"There's always crime or the smoking," she said. "It was always too much."

At 7:25 one recent morning, Normandy High's North Hall clamors with teenagers going from their yellow lockers to classes. Some linger in the hallway after the bell. Many students carry clear backpacks — a policy the school district adopted last year to keep weapons off campus.

Eboni is in her language/composition class, handing out folders to classmates so they can work on research papers. The Advanced Placement class is one of three that Eboni is taking this year. Her 17 classmates hover over note cards trying to properly cite a book title. Eboni finishes hers and quietly waits.

Sherrill Rayford, who's taught at Normandy High for 10 years, said she's never known any of her students to go to an Ivy League school.

"I've had some students go do some exceptional things," she said. "But you never hear about them, all you hear about are the test scores."

Eboni transferred to Normandy as a sophomore from Northwest Academy Law, a magnet school in St. Louis. She had attended Normandy Middle School as an eighth-grader and felt it held her back.

She moved to rural Mississippi to live with her grandparents and go to a better school. But one year later, she missed her mother and returned to their home in Pagedale. She dreaded returning to the Normandy School District, which is struggling to keep its state accreditation. Eboni had her sights on the best colleges in the country.

That year, she found a mentor in her English teacher, Kristin Guile. In Guile she found a teacher who expected exceptional things from her. And in Eboni, Guile saw a student hungry to learn.

Guile tried to challenge Eboni by having her design an independent study project.

It sent Eboni to the school library, where she chose to read classics — books by Jane Austen, Kate Chopin's "The Awakening" — just for stimulation. After reading "Dreams of My Father" by Barack Obama, Eboni wrote the president a letter describing how their lives were parallel. Eboni would write essays on urban culture that left Guile awestruck. The two would discuss books and authors after school over coffee in Guile's classroom.

Eboni still comes by Guile's room after school some days.

"I love it when she comes by," Guile said. "She's an old soul. My job is to move her on to her next thing."

Eboni isn't the only Normandy student with enormous potential, Guile wanted to stress.

"Our school is filled with children with tremendous capacity."

Eboni's mother, Lekista Flurry, was 17 when she gave birth to Eboni and dropped out of Pattonville High School. Eboni rarely hears from her father.

No one from Eboni's immediate family has graduated with a high school diploma. But when Eboni was a baby, Flurry began reading to her. She read through many of their moves, though it stopped when the family was in homeless shelters. She used letter-shaped refrigerator magnets to work on spelling.

The first half of Eboni's life was rough, Flurry said. Eboni shrugs and says those years weren't that bad.

"She beat all the odds," Flurry said. "She's talking light of the situation of going from house to house. But there were times she lived in cars. She doesn't remember. I would collect food stamps, but I didn't have anywhere to put the food."

In the midst of the family's tumult, Eboni started attending youth group at the St. Louis Dream Center, a church on Margaretta Avenue founded by televangelist Joyce Meyer. Eboni's mother used the food pantry until she found work.

Eboni quickly became a leader in the youth group and sometimes lead 40-some kids in Bible lessons. She says that without her faith, she probably wouldn't still be in school.

"It was incredible to see how resilient she was," said Tony Gilmore, youth pastor at the time who now lives in Chicago. "She took whatever she had and gave it to the other kids. ... I wanted to teach them your circumstances don't define your destiny. She was one of those kids who really grabbed that."

About that time, things finally stabilized. Flurry found a job ironing shirts, and then making sprinklers at an area factory. They now live in a tidy tan brick house in Pagedale with Eboni's younger brother and sister.

Recently, Flurry was laid off from her job at Code 3, a public safety equipment company in Overland.

"I tell her not to worry," Flurry said.

The family struggles, but Eboni tries to focus on what's ahead.

For years, she read anything she could find on Ivy League colleges. When she had the money, she'd order books on Amazon about how to successfully apply.

"I've been in love with all eight of them at one point, except for Dartmouth," she said.

She scored a 27 on her ACT, when the average composite score at Normandy High last year was a 16. No one has ever scored higher than a 27 at the high school, according to the school district.

Last summer, Eboni attended a journalism program at Princeton University. There, instructors helped her decide on a college. She chose Columbia.

She applied, and then waited. On Dec. 8, while editing the school newspaper after school, she logged on to the university's website. It was 4 p.m. — the time the university would post its acceptance and rejection letters for early admissions. Eboni pulled up the letter addressed to her. "Congratulations!" it began.

Along with the acceptance notification, Eboni received another letter saying all expenses were paid.

Her goal is to become a journalist.

She knows many of her college classmates will come from elite high schools with stronger academic backgrounds. And she knows she'll have to work harder than many of them to make up for it.

While Eboni's ACT score is high for Normandy students, it is on the bottom edge of Columbia's incoming freshmen. Columbia's admissions office "takes a broad range of qualifications and characteristics into consideration" when reviewing applicants, university spokeswoman Katherine Cutler said.

Eboni is trying to be realistic about the stress. But it can't be any harder than what she's overcome already, she said.

She says she can't wait to start this next chapter of her life. It begins in July, when she's scheduled to spend five weeks at Columbia for orientation.

Cheerleader with Down syndrome inspires classmates

At Hazelwood West, a school of 2,200 students, Barbara Behlmann is one of the most well-known, people say.

St. Louis College of Pharmacy reaches out to city middle-schoolers

The district has two years to show improvement, or face sanctions as severe as a state takeover.