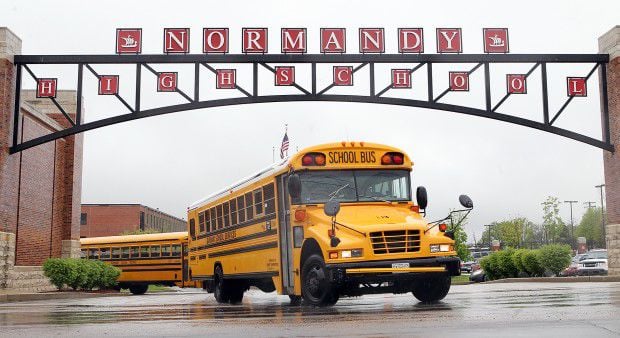 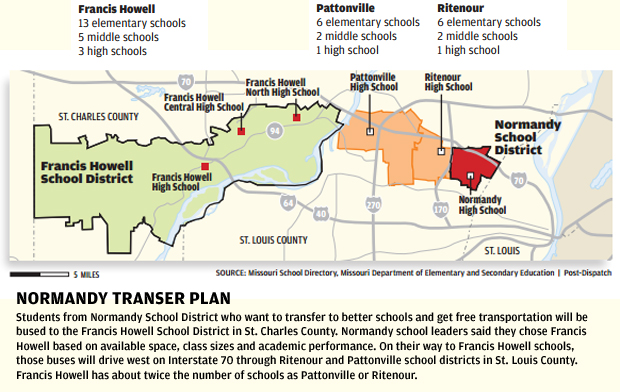 If Normandy students want to ride the bus to a better-performing district under a recent Supreme Court ruling, they’ll have to enroll in Francis Howell — a district with schools more than 20 miles away.

The decision by Normandy officials to provide buses to Francis Howell has people in both districts asking the same question — just how many students will want to go?

“Nobody is going to want to send their kids all the way out there,” said MarQuitta Miller, who wants to get her eighth- and 10th-grade daughters out of unaccredited Normandy schools and into higher performing ones in Pattonville, Hazelwood or Ladue. Francis Howell is not on her list. “That’s a good school district, don’t get me wrong,” Miller said. “But to travel out there? That’s crazy.”

With the start of the new school year less than six weeks away for Francis Howell students, administrators are scrambling to determine just what Normandy’s decision might mean for the district. The need to hire staff is one possibility, but officials won’t know more until after Aug. 1, the deadline for those who want to transfer to file paperwork. But Francis Howell leaders added that the district does have space in some buildings to accommodate additional students.

“Parents in unaccredited districts desire to have a good educational experience for their children,” Francis Howell Superintendent Pam Sloan said Monday in a message to parents. “When students arrive from Normandy or Riverview Gardens, we will gladly welcome them and begin our work with them like we do with all of our students.”

All districts in the region have been grappling with how best to comply with the Missouri Supreme Court decision last month that says children living in unaccredited school districts, such as Normandy and Riverview Gardens, may transfer to higher-performing schools in the same or adjoining counties. The unaccredited school systems — not families — must foot tuition bills. The failing districts also must pay for transportation to at least one school district.

Normandy families may choose to attend other districts, but they must find their own way to those schools. Riverview Gardens has not announced where it will transport students.

The Missouri Department of Elementary and Secondary Education has told districts they can turn away students once classes are full. Sloan said the board is determining whether it needs to revise district class size policies under the ruling. Board members called an emergency closed session for Monday night.

School Board President Marty Hodits said people stopped him over the weekend after the Post-Dispatch reported that Normandy had chosen a district in St. Charles County as the destination to which it would transport students who wish to transfer.

“Everybody’s kind of upset with all the violence that happened over there,” Hodits said.

Laura Compton, who moved to St. Charles County from the Riverview Gardens School District 13 years ago, has a 9- and a 12-year-old in Francis Howell schools. She’s concerned about the strain on the district.

In just a few hours after Monday’s announcement about Normandy’s decision, the Francis Howell School District Facebook page had more than 100 comments on the issue. A few parents threatened to pull their kids out of district schools, while some chastised those for stereotyping Normandy students as troublemakers based on where they live.

“All this is going to do is raise our taxes and ruin our accreditation! It’s not our fault they ruined their school district!” one person wrote.

Francis Howell has three high schools, including one that added classrooms in the past few years. Francis Howell High, at Highway 94 and Highway D, is the district’s oldest high school. Renovations completed in 2011 replaced most of the old, multi-building campus with a new building, and added 106 classrooms.

“We felt this would be an opportunity for diversity for our kids,” McNichols said.

But Francis Howell parents wondered about their own children.

“I really don’t like it,” said Stacey McCarty, whose daughter will be a freshman next year at Francis Howell North High School. “It’s going to take away from the education of our own kids.”

In the past year, police and fire chiefs have become concerned about the level of violence and dangerous behavior at Normandy middle and high schools.

In 2012, the high school alone reported 285 discipline incidents — such as assaults, drugs and weapons — that resulted in out-of-school suspensions. That’s a rate of more than one for every four students, the highest among public high schools in the region.

“We don’t have a problem with the kids,” Normandy High School Principal Calvin Nicholas said in April. The problems at the high school are “adult problems,” he said. Nicholas no longer works for the district.

Some Normandy parents who also want safe schools speculated that administrators chose Francis Howell to keep children from transferring. Many parents in the district have unpredictable work schedules, or no cars, leaving them no option but to transfer their children wherever bus service is provided — or, keep them in Normandy schools.

Charlotte Hood said she wouldn’t feel comfortable sending her 10th-grade son to St. Charles County. It would require getting up too early, and driving an hour from her job in St. Louis to pick him up if he ever got sick, she said.

And then there’s the race factor. While Hood is exploring private schools for her son, where he can be exposed to a more diverse student body, she doesn’t like the thought of him being such a minority.

“With that population being predominantly white and people whose background is so different, their thought patterns and their logic are so much different that they may not be able to identify with children from this area,” she said. “It would be another stress for these children, and yet they’d be expected to do better.”

The first day of the new school year in the Francis Howell district is Aug. 8, just three days after districts plan to start enrolling students from Normandy and Riverview Gardens who choose to transfer under the law.

“The Legislature knew this was coming. They chose to ignore it and go off to other things,” Hodits said. “Now, we’re all going to find out what it means in a hurry.”

Potentially, more than 7,000 school-age children living in the Normandy district could transfer under the statute, according to 2010 figures from East-West Gateway Council of Governments. Of those, about 4,800 children were enrolled in public school. The rest attended private schools or were home schooled.

For years, school choice advocates in the Legislature have used the transfer law as political leverage, refusing to give districts the authority to decide how many slots to offer transfer students unless lawmakers also approved other options — such as tax credit-supported scholarships for private schools.

“Historically what has always happened is the school district establishment has been refusing to do any kind of educational choice,” Rupp said. “I don’t see the Legislature all of a sudden saying OK, we’re going to give you everything you want” on changing the transfer law.

Last week, school district representatives across the region agreed on a centralized enrollment process that will largely be handled by Cooperating School Districts of Greater St. Louis.

Students from Normandy or Riverview Gardens who want to transfer must first notify their home districts. Students will not be enrolled in their selected districts until Aug. 5, after Cooperating School Districts has determined how much room each district has. (Hazelwood and Ferguson-Florissant have said they will begin enrolling transfer students sooner.)

If there is more demand than seats available in any district, there will be a lottery.

Mark Schlinkmann of the Post-Dispatch contributed to this report.

Will be July 11 at Howell Central High gymn

Eboni Boykin, member of Class of 2012, pushed through tough classes and inspired mother to earn GED.

Instead of busing students, bring in excellent teachers

Rather than transfer hundreds of students daily to distant school districts, why not transfer excellent teachers? For example, ask half of the…

I have a somewhat different perspective on "Transfers face a long road" (July 2). The social dynamics of school desegregation in the '50s and …

Guidelines would allow districts to turn away students based on class size goals.

FERGUSON-FLORISSANT SCHOOLS • Because it borders the unaccredited Normandy and Riverview School districts, officials of the Ferguson-Florissan…

Tyrone McNichols, who became superintendent on July 1, works to convince parents that changes will bring progress

More than 2,500 attend public meeting to question school board about everything from safety to academics.

Superintendents say they will comply with court ruling to enroll students from Normandy, Riverview Gardens.

High court says schools did not show that receiving students from failing school districts would be "impossible."