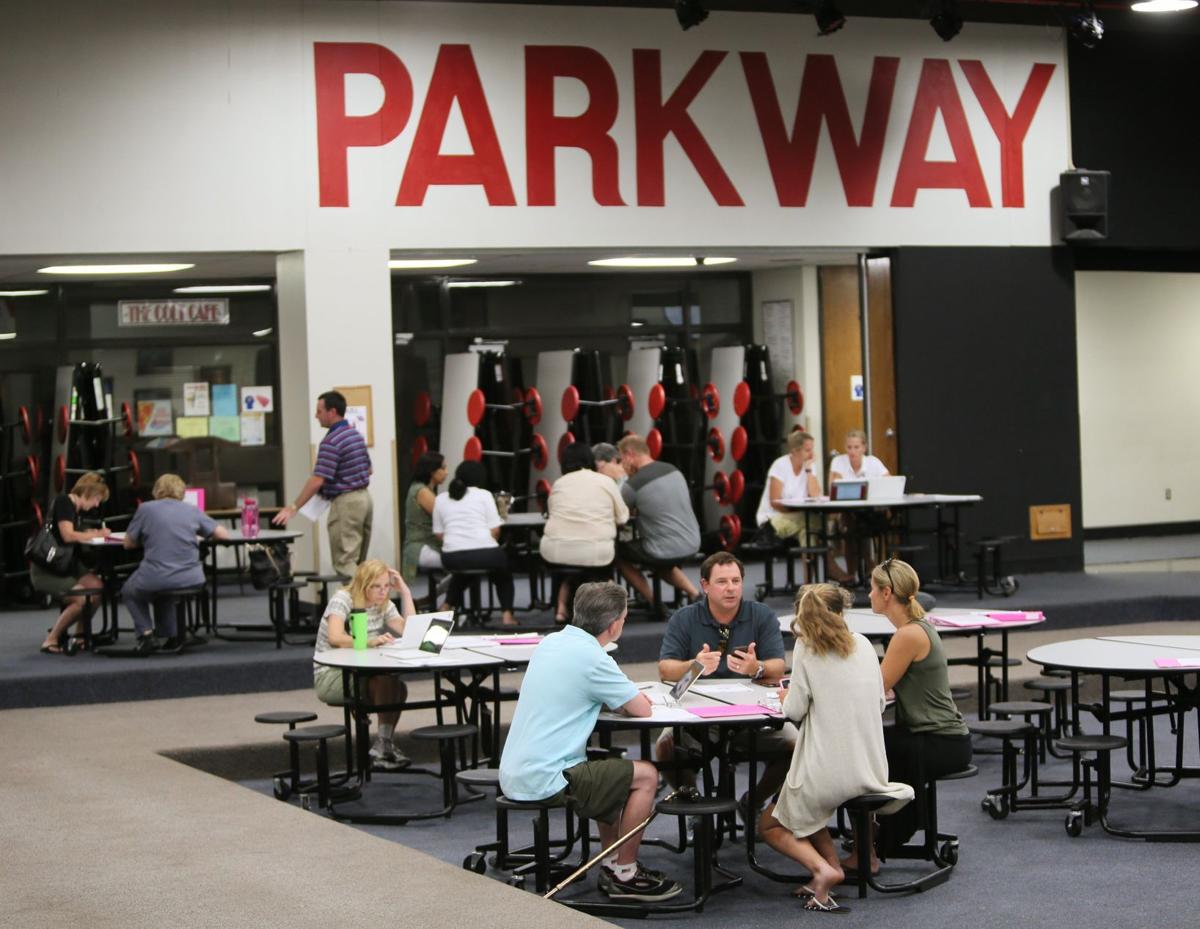 Parents look over printed material that may be used as part of the sex ed curriculum in the Parkway School District on Monday, Aug. 29, 2016, in Chesterfield. The open house curriculum night was held at Parkway Central Middle School. Photo by Chris Lee, clee@post-dispatch.com 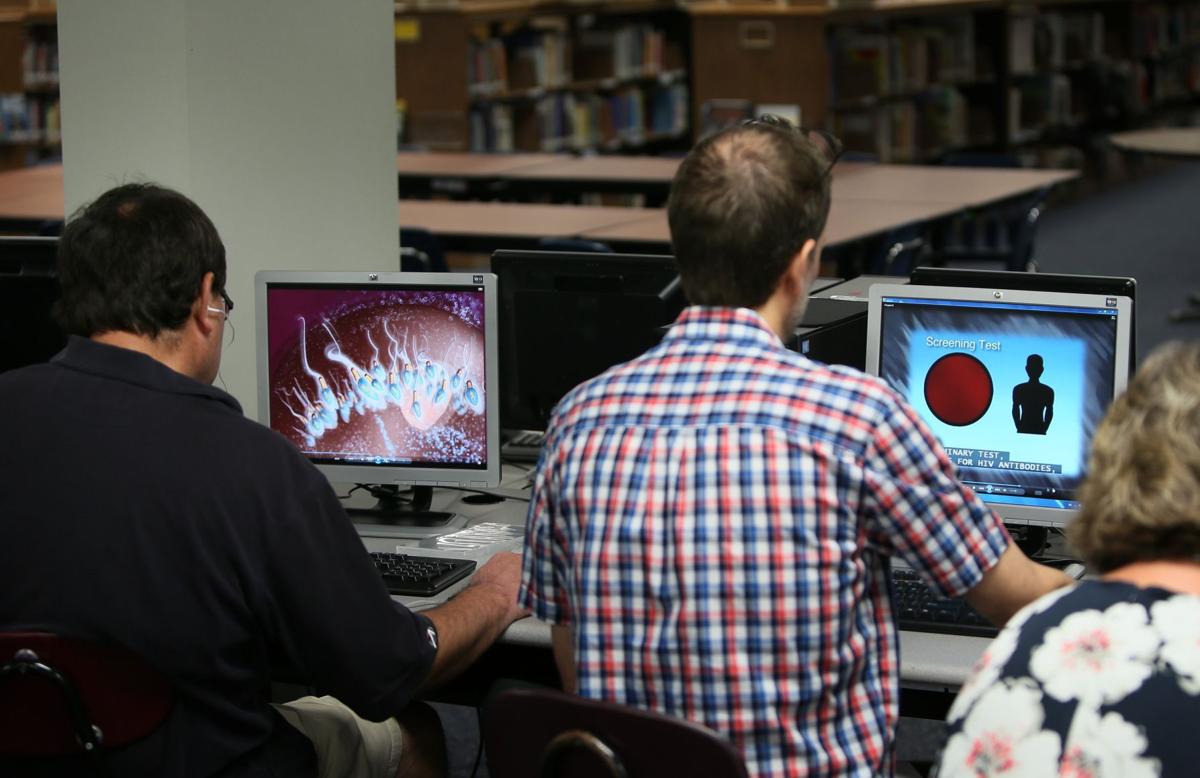 Parents view a variety of videos that may be used as part of the high school sex ed curriculum in the Parkway School District on Monday, Aug. 29, 2016, in Chesterfield. The individual screenings were held in the Parkway Central Middle School library. Photo by Chris Lee, clee@post-dispatch.com

But the event did little to change the minds of some parents who are decidedly against the curriculum or inform others who were newer to the controversy surrounding it.

The curriculum has drawn criticism from some parents who say it pushes a social agenda and teaches their children information they think is inaccurate and “too adult” for the classroom. Some say they would rather students be able to opt into the class to avoid feeling ostracized. Students already have the option to opt out of the course.

The School Board, which has said it will not change its decision, voted in favor of the revised curriculum in March.

Those topics were not put on display in the lesson videos Parkway officials showed to parents at Monday’s open house.

“In those terms, it was a nonevent,” said Shawn Stone, a Parkway parent from Manchester.

Ron Ramspott, health and physical education coordinator for Parkway, told parents that not all of the district’s curriculum comes from textbooks and videos.

Opponents’ reaction to the lesson plan has also prompted allegations of bullying toward its supporters.

A Parkway Central High School student and vocal proponent of changing the district’s sex education curriculum said he has been the target of hateful personal attacks online. Andrew Bennett, 16, a sophomore at the high school, is one of a handful of student activists who have openly supported expanding the district’s sexual health courses.

Andrew’s parents believe a small but vocal group of opponents to the new curriculum have inappropriately used images and videos of their son on social media.

Andrew’s father, Jack Bennett, said Monday his son has received many “inflammatory and derogatory” messages that have made the high school student fearful. The elder Bennett said Monday he doesn’t know who is behind the posts. Bennett wrote an editorial to the Post-Dispatch asking members of the school community to stop the harassment and to be more inclusive. He is a member of the advisory council for the new curriculum.

Andrew said at the last school board meeting that he had been told by someone that he was going to hell.

Andrew’s mother, Janie Walker, said at the same school board meeting the personal attacks on her son have gone too far.

“We can’t control what adults in the community are saying,” Kelly said. “Obviously, we would provide any support the student would need.”

A conservative group that describes itself as pro-family called MassResistance Missouri has uploaded a number of posts in recent weeks criticizing the School Board and its decision to change the curriculum. In a post added to the group’s page Aug. 22, a blurry screen shot of Andrew’s Twitter profile appears with images from other Twitter accounts he follows. This picture and those of other student activists are paired with the words “Activist Students Know Best #PkwyFail.”

One Parkway parent, who did not give her name and would not deny or confirm affiliation with the Missouri chapter of MassResistance, said Monday the accusations of harassment were false and denounced them as rumors.

While the parent condemned bullying, she said it’s possible Andrew had made himself a target by being outspoken on the issue.

Editorial: Can sexual education be right-sized for all?

Sex education was controversial even when people knew only that there were two genders and that sex between them could lead to babies. Adding gay, lesbian, bisexual and transgender sexuality to the curriculum has ignited controversy in high schools across the nation and is inflaming tensions locally in the Parkway School District. Sex educators are caught between competing interests. Parkway is offering options that should allow parents greater control over the message they want their children to hear.

Parents look over printed material that may be used as part of the sex ed curriculum in the Parkway School District on Monday, Aug. 29, 2016, in Chesterfield. The open house curriculum night was held at Parkway Central Middle School. Photo by Chris Lee, clee@post-dispatch.com

Parents view a variety of videos that may be used as part of the high school sex ed curriculum in the Parkway School District on Monday, Aug. 29, 2016, in Chesterfield. The individual screenings were held in the Parkway Central Middle School library. Photo by Chris Lee, clee@post-dispatch.com