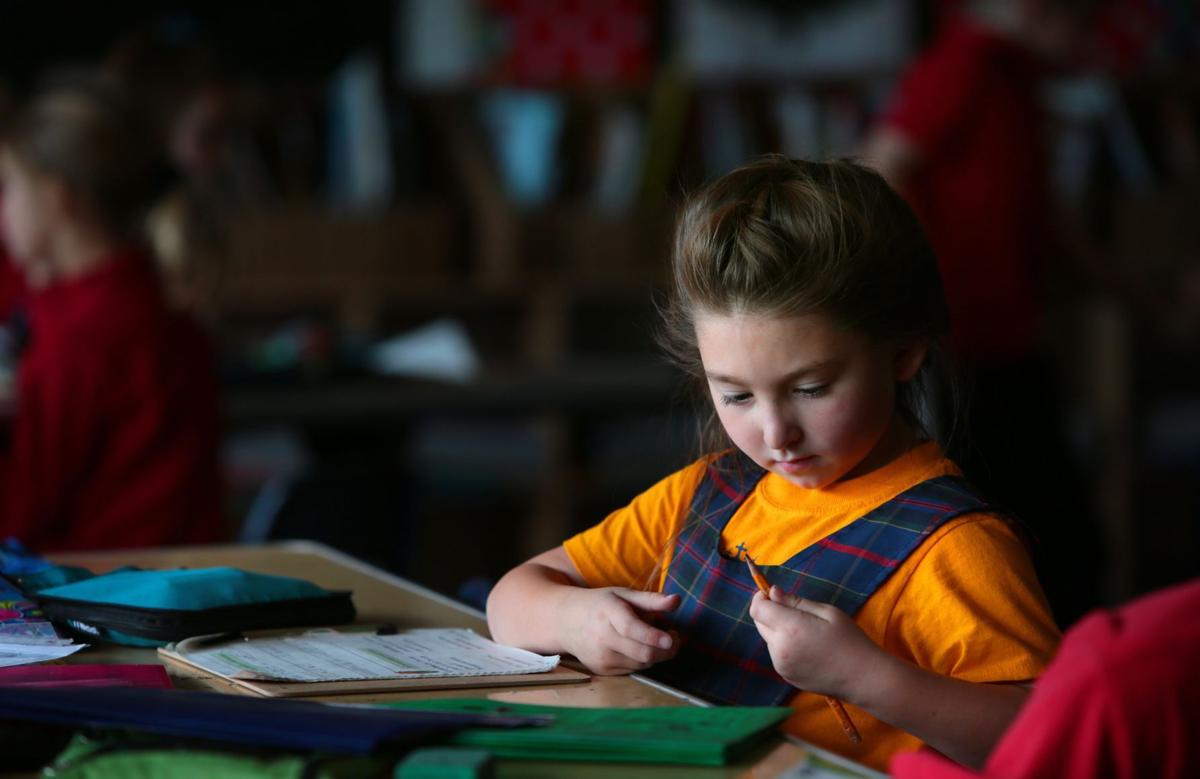 First-grader Gabriella Ward, 6, discovers a broken pencil lead as she works on math at St. Margaret of Scotland Catholic School in the Shaw neighborhood on Friday, Jan. 5, 2018. Photo by Robert Cohen, rcohen@post-dispatch.com 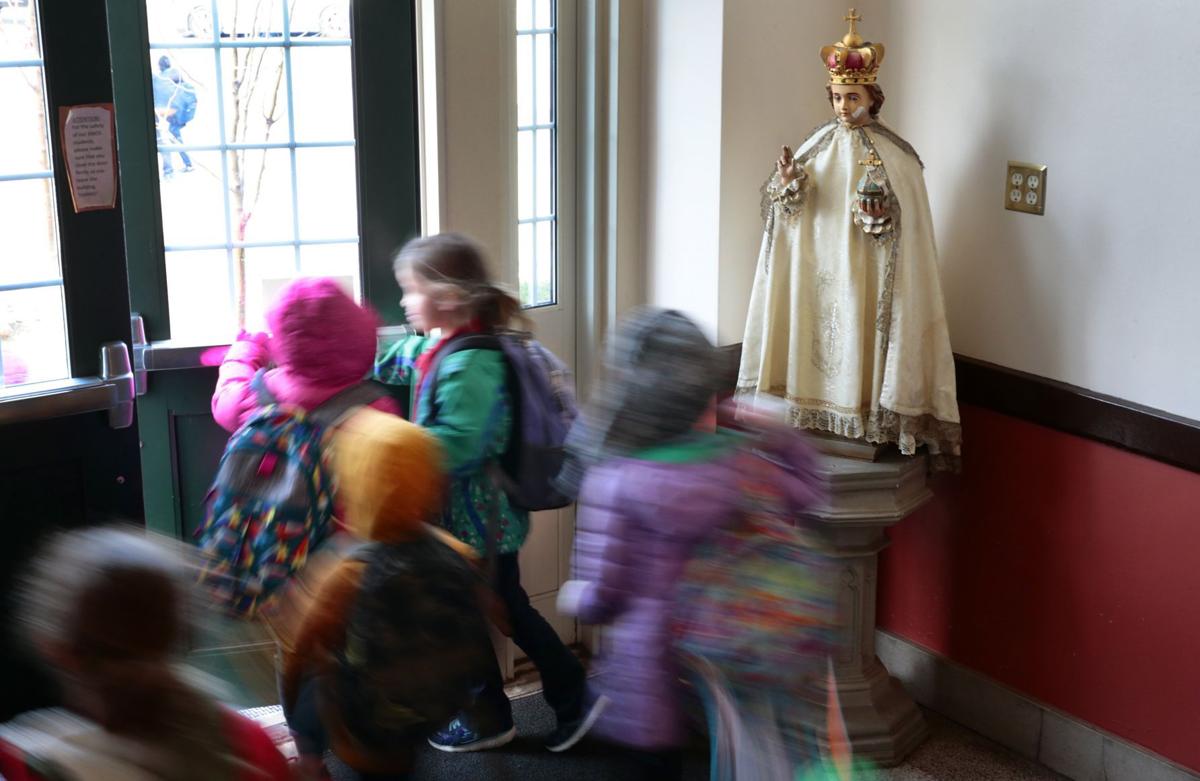 St. Margaret of Scotland Catholic School students leave for the day, passing a depiction of the Infant Jesus of Prague, in the Shaw neighborhood on Friday, Jan. 5, 2018. Under the new tax law, parents can use 529 college savings funds to pay for private primary and secondary school tuition. Photo by Robert Cohen, rcohen@post-dispatch.com

Parents in many states, including Missouri, can now get a state tax deduction for private school tuition, thanks to the federal tax overhaul passed last month.

A lesser-known part of the new law lets families use state-sponsored 529 college savings plans to pay for expenses such as tuition, books and tutoring for kindergarten through high school.

While Missouri families can automatically use 529 monies for K-12 expenses, state law will have to be changed for the new provision to apply to Illinois families, according to the Illinois treasurer’s office.

Not only can families withdraw earnings from the plans tax-free, they also can get state tax deductions for putting money into the accounts. Missouri residents can deduct from their state taxes up to $8,000 a year for contributions to 529 plans. Illinois residents would be able to deduct up to $10,000 per child each year if the law is changed to allow it.

The original idea for such savings plans was to have families invest money over a long period of time for college expenses. Using 529 funds for elementary and secondary education significantly shortens the time families would have to grow their money.

Still, using 529 plans is a no-brainer for private school parents because they can simply deposit the money they were going to spend on tuition anyway and get an automatic tax discount, said Nat Malkus, deputy director of education policy for the American Enterprise Institute.

“You’d be pretty dumb not to do it,” Malkus said. “It’s a pretty direct transfer, led by a change in federal statute, from the Missouri treasury to private school parents.”

Missouri had 110,000 private school students in the 2015-2016 school year, and Illinois had 231,300, according to the National Center for Education Statistics. By Malkus’ estimates, if every private school family took full advantage of the 529 plan, Missouri could miss out on roughly $42 million a year in state income taxes. Illinois would miss out on roughly $90 million. That doesn’t even account for the possibility that more families will enroll in private school.

“Philosophically, we just have a problem with that when, whether it’s state money or federal money, is used to subsidize private schools that are not held accountable to the public in the same way public schools are,” said Brent Ghan, deputy executive director of the Missouri School Boards’ Association.

Missouri’s potential tax loss to the education savings plans comes on top of other anticipated state tax revenue losses from the tax overhaul. One study predicts Missouri will lose $58 million under the new federal tax plan.

The expansion of 529 plans to include private school expenses could be considered a win for supporters of school choice. But some experts say it will mostly benefit parents who are already paying private school tuition, because the tax deduction may not be large enough to offset the cost of new tuition payments for lower-income families.

Missouri Treasurer Eric Schmitt, a father himself, touts this as a win for middle-class families. His office plans to be “pretty aggressive” in promoting and publicizing the new 529 option, he said.

“For me, I’m always supportive of anything that could provide middle-class tax relief,” he said.

Private schools also say they will do all they can to inform families.

“School boards, teacher associations, parent associations, we’ll use every vehicle we have,” said Sister Nathalie Meyer, interim director of Catholic education for the Archdiocese of St. Louis, which is the largest private school system in the St. Louis area. “Anything that gives our parents some options so that they can consider Catholic schools is wonderful.”

Washington U. student takes heat for taking down flags for 9/11 victims

The 2,977 flags were put up again, but the incident quickly drew calls for the student's expulsion.

In most cases, students who are exposed to COVID-19 have to stay home for a week to 10 days if they don't develop symptoms.

Ferguson-Florissant music teacher is Missouri's teacher of the year

A whole generation has been born since 9/11. How do schools teach the terrorist attacks 20 years later?

St. Louis County police are conducting a search of the school.

Fort Zumwalt school board member moved to Florida in June

Thomas Emmons' residency became a topic of discussion after he voted with the School Board majority to keep the district's mask-optional policy.

St. Louis Public Schools will require staff to be vaccinated against COVID-19

Staff members must be fully vaccinated by Oct. 15, or apply for a medical or religious exemption.

First-grader Gabriella Ward, 6, discovers a broken pencil lead as she works on math at St. Margaret of Scotland Catholic School in the Shaw neighborhood on Friday, Jan. 5, 2018. Photo by Robert Cohen, rcohen@post-dispatch.com

St. Margaret of Scotland Catholic School students leave for the day, passing a depiction of the Infant Jesus of Prague, in the Shaw neighborhood on Friday, Jan. 5, 2018. Under the new tax law, parents can use 529 college savings funds to pay for private primary and secondary school tuition. Photo by Robert Cohen, rcohen@post-dispatch.com