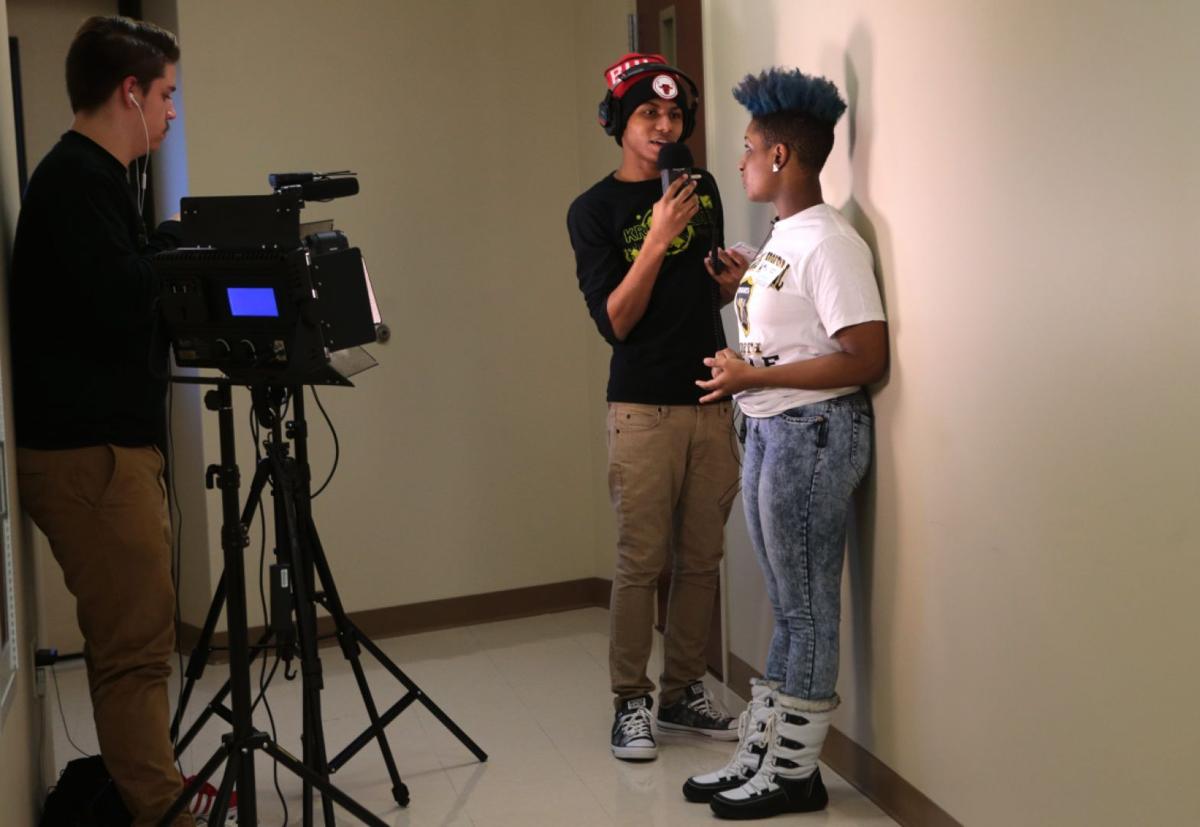 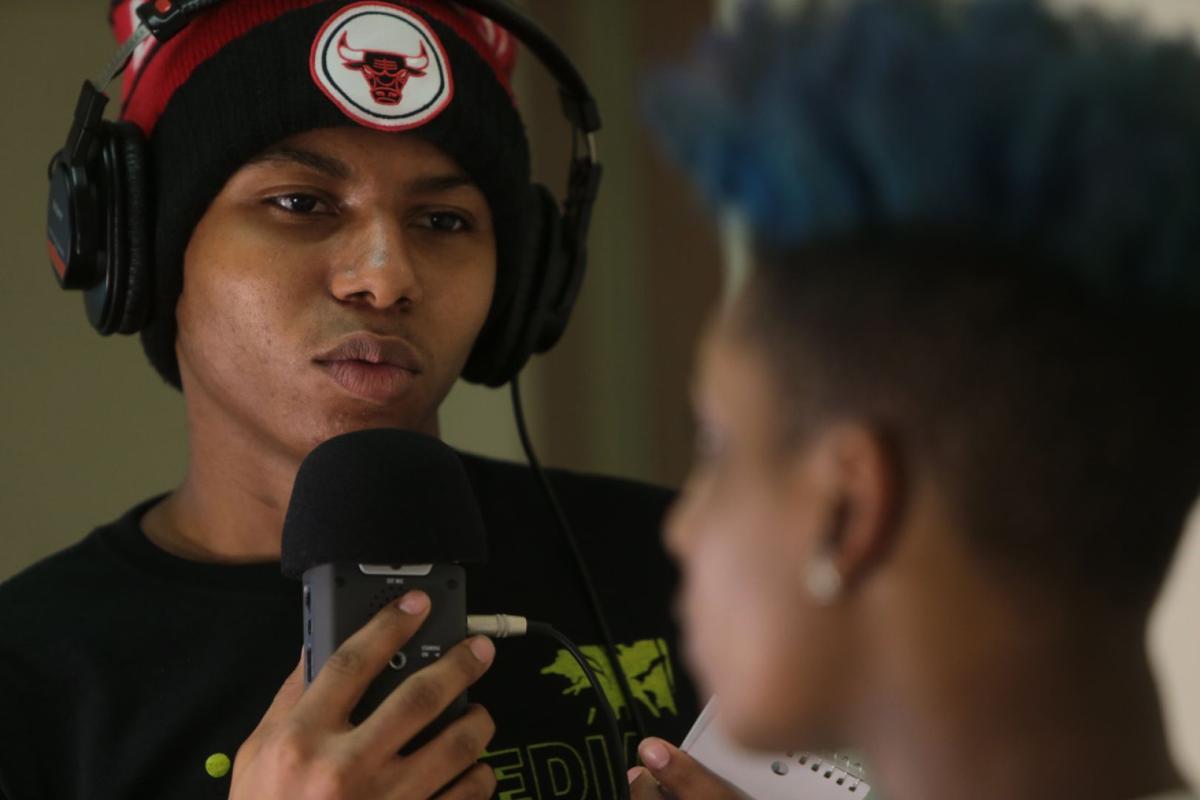 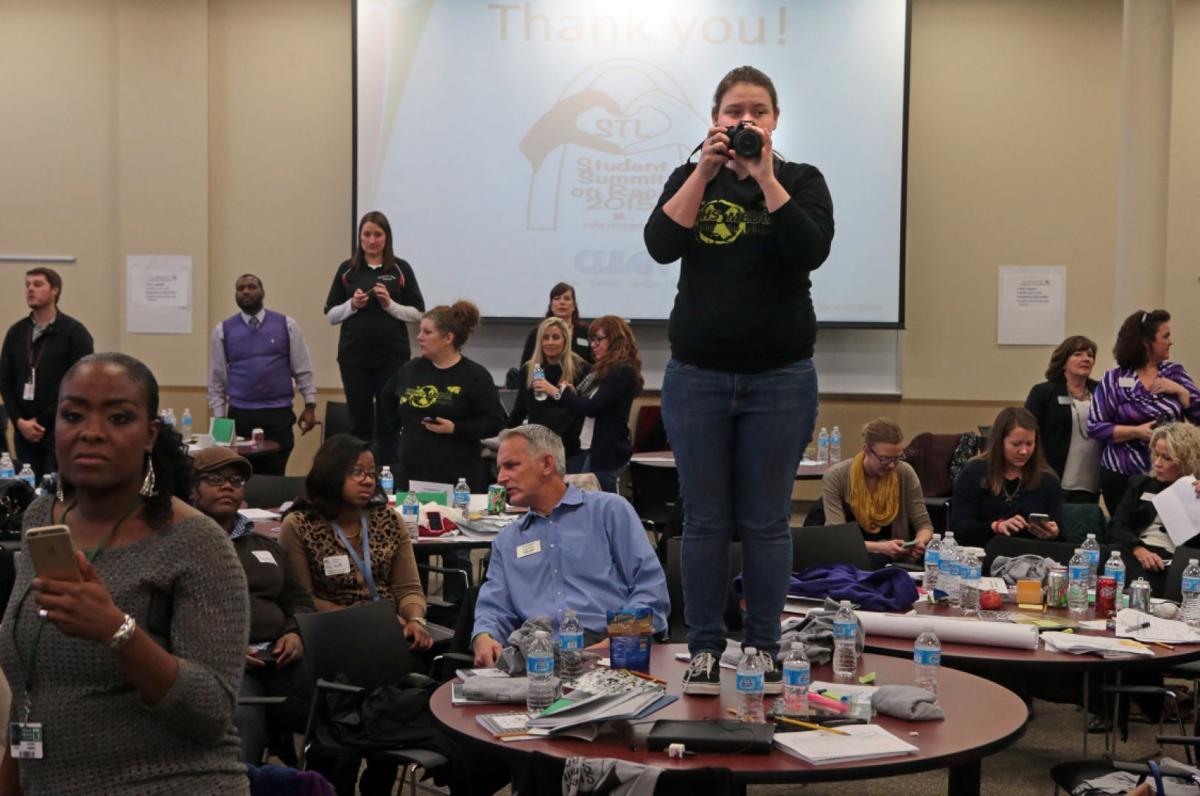 BRECKENRIDGE HILLS • Inside the media lab at Ritenour High School, Cameron Glaezner and Brandon King edited video from a laptop computer, trying to distill several hours of conversation into a 10-minute documentary. Beside them, Will Rivers worked to improve the audio of an interview with a student activist at McCluer High School.

Cameron, a senior, paced. The students had four days to finish their draft documentaries based on hours of footage they’d collected at the Student Summit on Race, where teens from 14 high schools convened to talk about problems and solutions.

“We want to get the fundamentals of what the youth are trying to say,” Cameron said, moving around the editing room. “Right now we’re trying to adjust to another problem — the fact we have hours and hours of film.”

For most of this school year, television and radio students at this high school in north St. Louis County have put aside the kinds of features high school journalists normally cover — profiles on coaches, controversies involving school lunches.

Instead, they’re stepped out of the classroom to cover the weighty topics of race, youth and policing in the aftermath of Ferguson, landing interviews with Gov. Jay Nixon, the St. Ann police chief, student activists, and Hazelwood Superintendent Grayling Tobias, who serves on the Ferguson Commission.

This year, Will began putting together a radio spot called Teen Speak. The series of interviews are intended to include the “stories, opinions and hopes in the aftermath of Ferguson,” he says at the start of each one. “We’re offering a voice to teens who otherwise would not have their voices heard.”

Giving voice to their peers is exactly what their instructor, Jane Bannester, wants her media students to be doing. The unrest that began after the fatal shooting of Michael Brown gave them the opportunity to do real work involving difficult topics during an historical time.

“It’s shifted all of what we do,” Bannester said. “Personally, it think it’s heightened the work. It’s real radio. It’s moved it from beyond anything they’d done before.”

Ritenour isn’t the only area high school where student reporters are tackling Ferguson-related topics. Francis Howell North and Kirkwood high schools, to name two, have published a number of editorials and news stories that center on youth and bigger questions that have come from Ferguson, such as those involving community building and change.

But Ritenour’s media program is perhaps the best equipped to take on a more ambitious role, with investment and infrastructure that few schools have.

The radio spots are aired on KRHS, a legitimate radio station, complete with a Federal Communications Commission certificate that hangs on the wall. The radio tower sits on the roof of the school. Listeners within a 10-mile radius have been tuning into 90.1 FM since 1977, when students broadcast music using eight tracks.

Then in 2013, the dusty studio was updated using proceeds from a $50 million bond issue. The $1.25 million media center now includes a television production studio and media classrooms. Students learn with state-of-the-art broadcast equipment and editing technology.

It’s an opportunity not lost upon Will, a senior, who wants to make radio his career.

At the summit, he moved from table to table, holding a microphone above the heads of teenagers as he worked to capture their conversations.

“This is as close as it gets to real world,” he said.

Nearby was Brandon King, standing behind a television camera. Ashley Meyer, the features editor for the Ritenour school newspaper, took notes.

Across the room, Isaac Chosich used KRHS social media to document the discussions. And beside him, Mekaila Warren was recruiting teenagers to give “confessionals” — one-on-one interviews about issues being discussed at the summit.

In the hallway, Mekaila asked students if they had talked about race at their schools before Brown was killed in August. Jazmen Bell, a senior at Maplewood-Richmond Heights High School, considered Mekaila’s next question: How the situation had changed her.

Jazmen, who comes from a multi-racial family, said she was aware of racial divides before Ferguson erupted. But she didn’t feel the need to address them. “It has caused me to speak out,” she said.

Inside the media lab, students had brainstormed for several days how they’d handle the summit — how to ask questions that encouraged discussion rather than trigger defenses. How to avoid inserting opinion into their reporting.

Mekaila had been up until 3 a.m. one recent Saturday working on her short-form documentary based on the confessionals.

Mekaila’s eyes were fixed on her computer screen as she worked on transitions needed to tie the interviews together.

Four other media students in the room had their laptops open, also editing footage from the summit.

It’s a process that has helped the students sort out the events in Ferguson and their aftermath.

And it’s also helped Mekaila sort out her future.

When she graduates from Ritenour, Mekaila plans to work toward becoming a news producer.

Member of Ritenour School Board accused of campaign finance violation

Selena Amerson is being fined $2,000 for failing to disclose contribution.

Gateway2Change involves 350 students from 33 schools, and continues to grow in size and influence.

A $1.25 million project brings media students together in one space, including KRHS, the only FCC-licensed high school radio station in Missouri