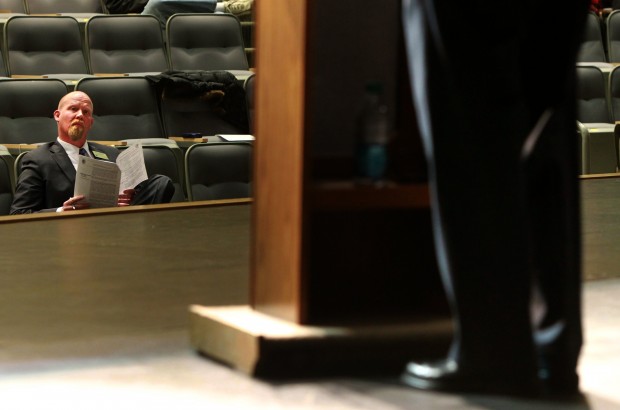 Rockwood School District Superintendent Bruce Borchers listens as State Auditor Thomas Schweich lists his findings from an audit of the district's use of bond money and other board operations at a meeting at Lafayette High School on Wednesday, Feb. 27, 2013. Photo by Christian Gooden, cgooden@post-dispatch.com 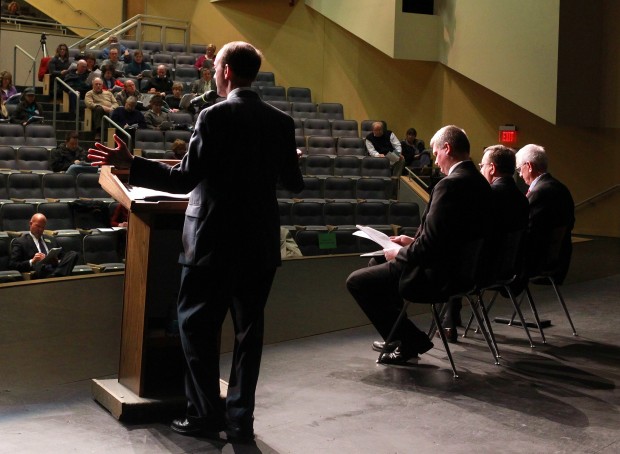 State Auditor Thomas Schweich, (left) lists his findings of a broad audit of the Rockwood School District including its use of bond money at a meeting at Lafayette High School on Wednesday, Feb. 27, 2013. Photo by Christian Gooden, cgooden@post-dispatch.com 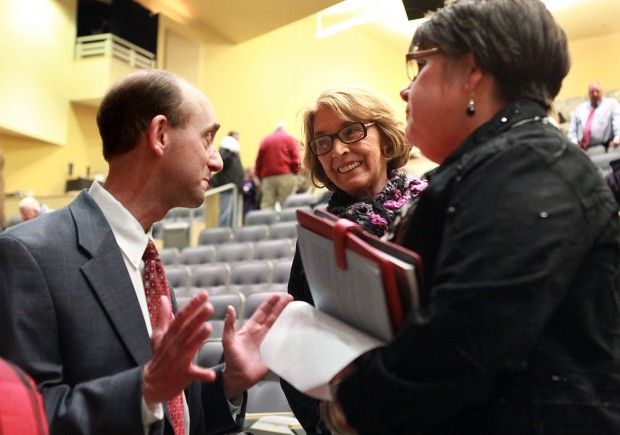 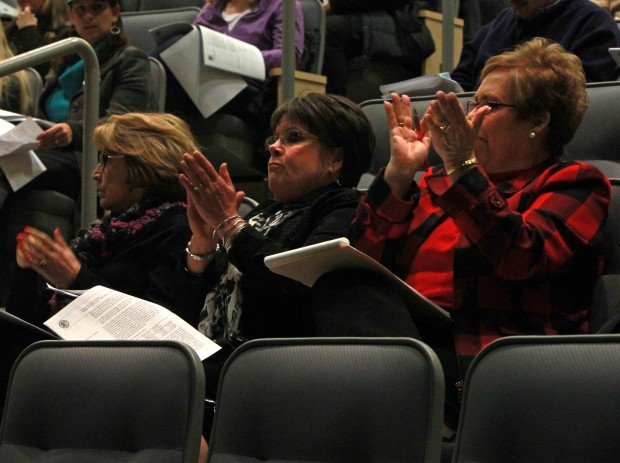 (Left to right) Charlotte Fink, Eileen Tyrrell and Renee Artman, members of citizen group Rockwood Stakeholders for Real Solutions, applaud when State Auditor Thomas Schweich gave a poor rating to the Rockwood School district's use of bond money and awarding of construction contracts at a meeting to announce the findings at Lafayette High School on Wednesday, Feb. 27, 2013. Photo by Christian Gooden, cgooden@post-dispatch.com 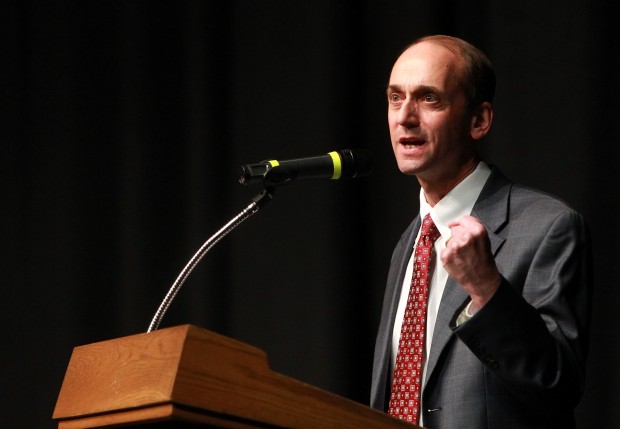 The Rockwood School District overpaid its longtime construction management company by more than $1.2 million over the last 10 years, essentially paying the firm twice for some work related to bond projects, a state audit has found.

The audit also concludes that some of those additional payments were approved, at least indirectly, by a Rockwood School Board member, Steve Smith, who was employed by that firm, Glenn Construction Co.

The Post-Dispatch reported in 2011 on Rockwood’s exclusive and expensive relationship with Glenn Construction, which for years has been the sole winner of district bond issue construction management contracts. A taxpayer group then pushed for a state audit of district operations.

State Auditor Tom Schweich said in an interview Wednesday that double charges, along with a district bidding process that seemed stacked in Glenn’s favor, are problematic. He’s recommending that the district attempt to collect any overpaid fees.

“The district lost out on $1.2 million that could have gone to educating children. Think what those teachers could do with $1.2 million with budgets the way they are right now,” Schweich said.

Schweich presented the audit at a meeting Wednesday evening at Lafayette High School. About 100 people attended and many applauded when Schweich talked about recommendations aimed at making the district’s construction bidding processes more competitive.

Rob Thoele, a parent in the district who said he had served on several committees, asked Schweich how the district would be held accountable for the recommendations in the report. He said the mentality of Rockwood was “this is the way it’s always done” and he wonders what will change.

The auditor will plan a follow-up with the district in 90 days.

Rockwood Board President Janet Strate had a prepared statement ready with an apology on behalf of the board, but neither she nor other district leaders addressed the crowd. The letter was posted on the district website shortly after the meeting and signed by the board members.

“We realize we have made some mistakes in the past,” the letter read, “and we want to apologize to our community for those. We take responsibility for our actions and genuinely regret the problems caused by them.”

She said the statement referred to construction management and the board’s approval of Superintendent Bruce Borchers’ hiring of consultants — an issue also cited in the audit.

The Board’s formal response to the audit, however, does not wholly agree with the audit’s findings.

The School Board acknowledges that contract language with Glenn Construction could have been clearer. And the board has agreed to some of the recommendations in the audit. But the board contends the terms with Glenn did allow for additional fees not initially identified. The board also said it was updating its construction management policies, and that future contracts would be clear about fees.

“The district will review the documentation surrounding each specific additional payment to Glenn Construction and determine whether in fact any ‘overpayments’ did exist,” the board wrote in its response to the audit findings.

The taxpayer group, Rockwood Stakeholders for Real Solutions, said their concerns were validated by the audit.

Tyrrell said she would push for a recovery of the $1.2 million outlined in the report. But both Strate and Borchers were unsure whether the district could collect the money.

Smith, named in the audit for what Schweich says was a failure to abstain on votes that would benefit Glenn Construction, says he doesn’t believe voting on change orders for construction projects presented a conflict. He stopped working for Glenn in June.

“I didn’t know which (votes) would lead to a request for an additional payment,” Smith said. “When it was clear that it led to more money, I left the room.”

Schweich said Smith made “a good effort to recuse himself. I don’t think he succeeded.” The vote on change orders generated a lot of work for Glenn, and that is clearly a conflict of interest, he said.

“When asked whether Smith should resign, Strate said, “That the Board needs to talk about, and we need to talk with Steve.”

The Rockwood Stakeholders wants not only Smith to resign, but Strate as well. The group has previously called for Borchers to step down.

Strate and board member Steve Banton are up for re-election in April.

The audit — which dug into a broad range of district practices ranging from finances to attendance records — gave Rockwood an overall rating of “fair.” It is the second-to-last ranking, just above “poor.”

Suzanne Dotta, president of the Rockwood National Education Association, said she was disappointed and embarrassed at the auditor’s findings.

Among the audit’s findings:

• Rockwood officials often failed to solicit bids when they added or substantially altered construction and maintenance projects. Instead, they issued change orders. When projects itemized in the contract were completed under budget, additional projects were added. Glenn Construction was paid an additional fee for these new projects, even though the firm’s original fee was calculated based on the overall contract.

For example, during the two-year Marquette High School renovation that began in 2010, 36 change orders totaling more than $1.8 million were processed and not bid, representing about 32 percent of the original contract amounts. Because of what the audit called contract vagueness, these changes resulted in additional fees to Glenn that appear to represent overpayments.

District records not cited it the audit show that as recently as Feb. 7, the board voted to approve $23,940 in payments to Glenn Construction. The records say the payment is for program management fees and notes it is for additional work.

Jim Glenn, owner of Glenn Construction Co., could not be reached for comment.

• While still employed by Glenn Construction Co., Smith did not always abstain from votes on the change orders. Those votes resulted in more than $2.7 million in projects and $189,265 in additional fees for Glenn. The audit found Smith voted for 12 additional projects approved from January 2011 to June 2012 while he worked for Glenn.

Schweich said that kind of conflict undermined taxpayers’ confidence in a board, but was not criminal. The district must deal with the matter internally, he said.

• The district has used the same law firm and accounting firm for financial audits without soliciting bids for either since 2005. Bids also were not solicited when Borchers hired two former colleagues as consultants.

• The district receives a monthly report of fuel card purchases, but no review or approval is documented. Mileage logs are not maintained for most vehicles.

The audit in Rockwood, one of the largest districts in the state with 22,000 students, began partly because of contention in the district over its construction practices and also because it had not had one since 1994, Schweich said.

His office is also working on an audit of St. Louis Public Schools. But auditors were focused on finishing Rockwood because of a $38.4 million bond issue the district has placed on the April ballot. Voters rejected a bond issue last year.

It is the office’s policy not to release an audit 30 days before or 30 days after an election, Schweich said.

Walt Young, a former mayor of Ballwin who has four grandchildren in the district, said the Rockwood Board did not listen to the residents of the district.

“I’m going to do everything I can to kill this bond issue,” he said.

The release of the audit follows the Rockwood School Board’s narrow approval Sunday of a contract extension for Borchers.

Smith was one of the board members to vote against the extension, saying Borchers had good ideas and drive for the academics of the school district, but not the business side. Smith, who was not on the board when the superintendent was hired, said Borchers had no experience running a district.

“I don’t think we need to be a superintendent training organization,” Smith said.

I am one of the first students to attend Lafayette High, and my wife and four children are all alumni. When asked what high school we attended…

District is seeking approval for a $38.4 million bond measure, weeks after a negative state audit.

Steve Smith violated conflict of interest law with votes involving the construction company that employed him.

Rockwood group says it will recommend a bond issue

Rockwood School District Superintendent Bruce Borchers listens as State Auditor Thomas Schweich lists his findings from an audit of the district's use of bond money and other board operations at a meeting at Lafayette High School on Wednesday, Feb. 27, 2013. Photo by Christian Gooden, cgooden@post-dispatch.com

State Auditor Thomas Schweich, (left) lists his findings of a broad audit of the Rockwood School District including its use of bond money at a meeting at Lafayette High School on Wednesday, Feb. 27, 2013. Photo by Christian Gooden, cgooden@post-dispatch.com

(Left to right) Charlotte Fink, Eileen Tyrrell and Renee Artman, members of citizen group Rockwood Stakeholders for Real Solutions, applaud when State Auditor Thomas Schweich gave a poor rating to the Rockwood School district's use of bond money and awarding of construction contracts at a meeting to announce the findings at Lafayette High School on Wednesday, Feb. 27, 2013. Photo by Christian Gooden, cgooden@post-dispatch.com