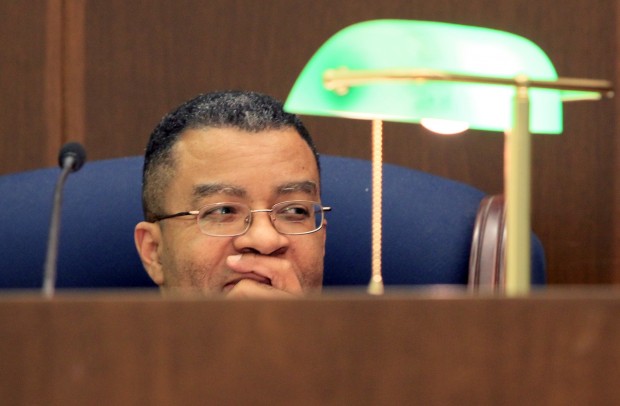 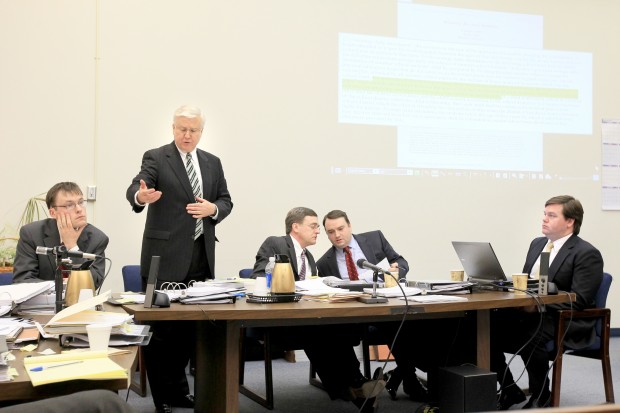 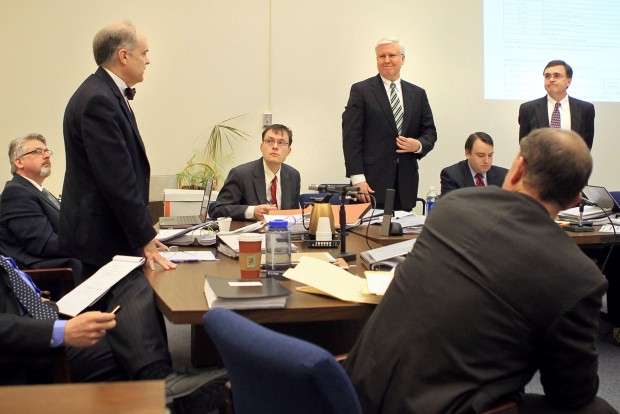 Lawyers, representing both sides of the case, argue issues in the Turner vs. School District of Clayton case in St. Louis County Circuit Court on Wednesday, March 7, 2012. Photo by David Carson, dcarson@post-dispatch.com 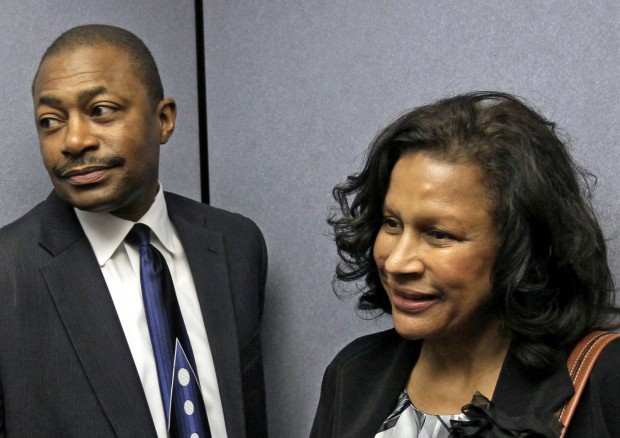 CLAYTON • Over three days, a St. Louis County Circuit Court judge has heard two very different versions of what might unfold if school districts were forced to comply with Missouri's school transfer law.

He has heard that more than 15,000 children in the city would transfer to county schools, financially wiping out the St. Louis district and flooding suburban schools.

And he also has heard that such predictions are hugely exaggerated.

It could be weeks before he issues a ruling.

It was not a trial filled with parents fighting on the stand for the education of their children, but district officials citing enrollment and budget numbers characterizing the law's potential impact.

The sole remaining plaintiff in the case, parent Gina Breitenfeld, never took the witness stand. And it was state attorneys defending the statute — not Breitenfeld's attorney — who took center stage during the bench trial.

Both sides agreed that the law gives children in unaccredited districts their choice of better schools nearby at the expense of their home districts. A 2010 Missouri Supreme Court ruling in the case made that clear. The dispute over the 1993 law was about its potential consequences.

On Wednesday, St. Louis Schools Superintendent Kelvin Adams testified that the gains his district has made since 2008 could not be sustained — and would likely be lost — if transfers were allowed.

In the last three years, students in the district have made slow and steady gains in all academic areas on the Missouri Assessment Program.

Attendance has improved. So have the graduation rate and district finances.

So much progress has been made that — had test scores of 13 students been better in reading last year — the district would have received the one academic point needed to put it in range of reaccreditation this year, Adams said. Ultimately, that decision rests with the Missouri Board of Education.

Potentially, the district could face a tuition and transportation tab of $283.8 million if a projected 15,700 city children were to transfer to a county school. Only about half of the children projected to transfer currently attend St. Louis Public Schools. The rest would come from private schools, charter schools or would transfer out of the voluntary desegregation program, according to one study.

When Adams was asked what would happen if the law were upheld, he said: "The district would no longer exist. It would be impossible to provide education."

Despite the district's recent gains, enrollment continues to drop by hundreds of students each year as more and more turn to charter schools. State funding also has fallen.

State attorneys suggested that the 24,000-student city school system could indeed adapt to further drops in enrollment and in revenue. The gains have taken place, said Chris Quinn, assistant state attorney general, despite the drop.

The Turner case has statewide implications that could affect thousands of students in two other unaccredited districts — Riverview Gardens in north St. Louis County, and Kansas City — and in their surrounding school systems.

For the last two years, legislators have debated changing the law's language to give school districts the ability to limit transfers when classrooms are full, and to limit the number of children transferring out of unaccredited districts. So far, nothing has passed.

Celia Watson, a mother of four who lives in the city, is one of those waiting for an outcome in the Turner case. Watson — who has followed the case but did not attend the trial — has two school-age children who attend a city magnet school, and she's worried what will happen to St. Louis Public Schools if districts begin taking transfers.

"I know as it stands, there is never enough money to go around in our schools," Watson said in an interview. "To add all of those other (tuition) costs, it sounds like there wouldn't be any money left."

In dispute during Wednesday's testimony court hearing was whether St. Louis Public Schools would receive any state money to help pay the tuition of city students who transfer under the law but had never set foot in a city school. Attorneys for city schools argued that according to the law, the district would not receive state aid for resident students who had never attended, a group that could include private school students and others. But Roger Dorson of the Missouri Department of Elementary and Secondary Education testified that there was a method through the state's data system. Even so, the district might not receive that money in the same school year the transfers occurred, he said.

In the fall, a group of taxpayers from the county and city joined the lawsuit claiming that the statute would create an unfunded mandate in violation of the Missouri Constitution's Hancock Amendment.

The school district, and others in St. Louis County, were waiting to be paid by the now-defunct Wellston School District. About 13 Wellston students had transferred under the statute to Clayton schools when the state stripped their district of accreditation in 2003. In 2006, the state education department took steps to stop the escalating costs that the transfers were having and created a special accreditation classification for the failed district.

As a result, after St. Louis schools lost its accreditation in 2007, the department told county districts they did not have to comply with the statute.

And since the filing of the Turner case, Clayton school officials have told parents "that we would not be accepting students until the final resolution of this matter," Clayton Schools Interim Superintendent Sharmon Wilkinson testified Tuesday.

The outcome of the lawsuit could affect 72,000 children living within the boundaries of the St. Louis and Riverview Gardens district. That figure includes 28,000 students who attend charter, private or parochial schools but could transfer to accredited public schools under the law. Children living in the unaccredited Kansas City School District could also be affected.

But attorneys for Breitenfeld and the state argued throughout the trial that the case was about two students — Breitenfeld's two daughters — and not about thousands.

By March 30, attorneys involved in the case are required to submit final documents to the judge. There is no timeline for a ruling.

Already, the case has taken five years. It is the second time Vincent has considered it. He ruled in favor of the school districts in 2008.

The state's high court overturned his ruling two years later and sent the case back to him for trial.

County schools getting calls about transfers

But no school districts are accepting students until case over transfer law is resolved.

One case accuses a teacher of filling in bubble sheets of her students who should have been taking state exams. Another says administrators ca…

Judge says 'No' to student transfers from St. Louis

Attorneys work to discredit claims that student transfers would be hurtful to educating children.

Interim superintendent was the first witness called today in a case that could have broad implications.

Lawyers, representing both sides of the case, argue issues in the Turner vs. School District of Clayton case in St. Louis County Circuit Court on Wednesday, March 7, 2012. Photo by David Carson, dcarson@post-dispatch.com