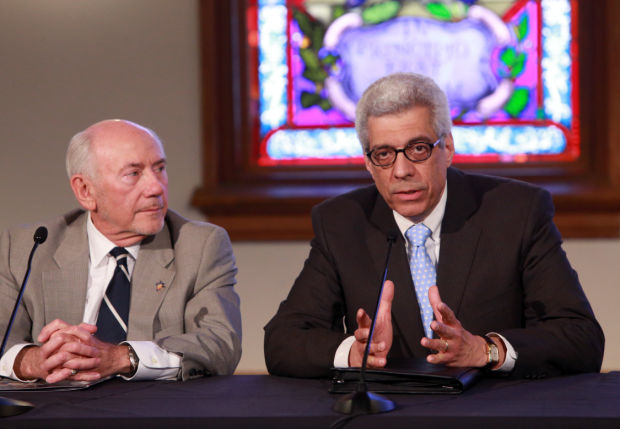 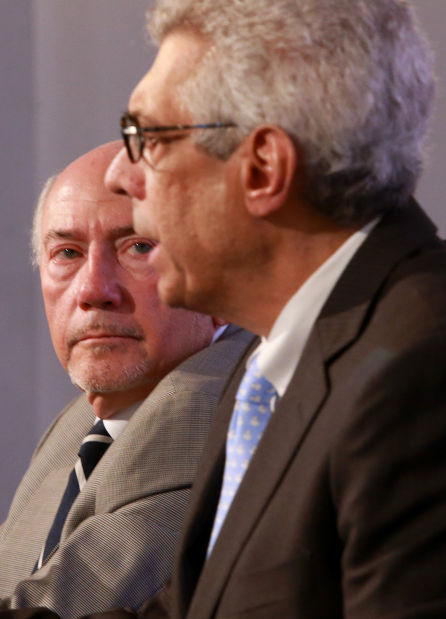 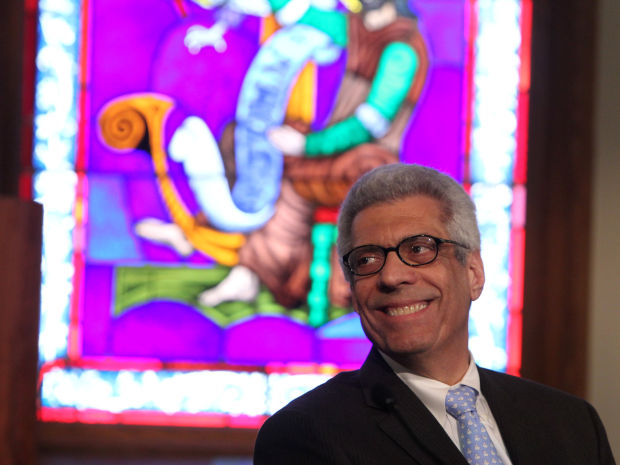 Fred P. Pestello, who serves as president of Le Moyne College in Syracuse, New York, reacts to kind introductory words at a press conference at DuBourg Hall on Friday, March, 21, 2014, where he was named new president of St. Louis University. Photo by Christian Gooden, cgooden@post-dispatch.com 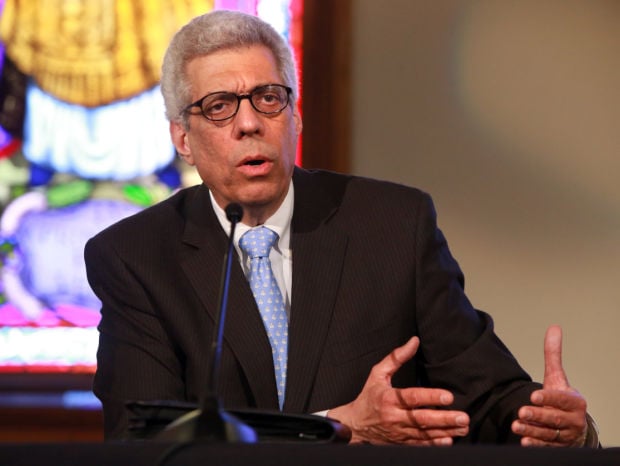 Fred P. Pestello, who serves as president of Le Moyne College in Syracuse, New York, answers questions at a press conference at DuBourg Hall on Friday, March, 21, 2014, where he was named new president of St. Louis University. Photo by Christian Gooden, cgooden@post-dispatch.com

The St. Louis University students walking around campus at dusk on a recent weekday didn’t really care about the major shift happening inside DuBourg Hall.

Today is Fred Pestello’s first day as SLU president, meaning it’s the first time a nonpriest will hold the position in the university’s nearly 200-year history.

Pestello’s arrival also means the campus has officially moved on from its controversial former president, the Rev. Lawrence Biondi, who retired in September after a 26-year reign.

While some students may go through their college careers never caring about who sits in the president’s chair, university board members, faculty, staff and alumni will likely spend the next several months scrutinizing Pestello’s leadership style and looking to see if he exhibits any Biondi-like traits.

Biondi was known as a visionary with the charisma and energy to get things done. He was also criticized by some who say he dismissed outside opinions, stonewalled faculty and used his position to punish his critics.

When Biondi gets credit for dressing up SLU’s campus with pedestrian walkways and green space, critics point out that the university’s academic rankings nose-dived during the building spree.

Conversely, Pestello is described as approachable, if not quite easygoing, even-tempered and not likely to hold a grudge. His former colleagues say he is an effective leader, works extremely hard and is sensitive to faculty concerns.

They also say he likes bureaucracy, is prone to surrounding himself with high-priced consultants and can be tone-deaf when it comes to spending money.

Among SLU faculty, staff and alumni, the hope is that Pestello will usher in an era where students and faculty will have more of a voice in how the university is governed.

Originally from Cleveland, Pestello came to SLU from the University of Dayton, where he spent 24 years establishing himself as an academic before becoming an administrator.

In 2008, he became the first lay leader of Le Moyne College, a small Jesuit college in Syracuse, N.Y. He presided during a time when enrollment dropped sharply before rebounding in recent years. Pestello also saw the school’s endowment nearly triple during his tenure.

A few days before he and his wife, Frances, moved to St. Louis, Pestello, 62, laid out his vision for SLU:

He is committed to research. He wants to distinguish the school among the 28 Jesuit universities nationwide. He wants to develop a strategic plan, and he wants to give faculty members salaries that are in line with similar schools.

“The first key challenge is to get a better and deeper understanding of St. Louis University,” he said. “We want to be that premier Jesuit university that attracts the faculty and students we want to attract. We have to figure out how we continue to be the first choice for faculty, staff and students.”

As for his leadership style, Pestello said, “I try to put people in a position for which they are well-suited and give them the resources that they need. I do not believe I am a micromanager.”

A number of his former colleagues at Le Moyne predict that Pestello will ultimately be successful at SLU. One of them is David Voorhees, an associate professor of computer science.

“He analyzes decisions based on data rather than on gut feel. He’s very interested in gathering the appropriate data before he makes a decision,” Voorhees said.

When Le Moyne was going through an enrollment crisis, Pestello studied the issue extensively to figure out how 17- and 18-year-olds make decisions, and then matched the school’s marketing and recruiting efforts to that data, Voorhees said.

The Rev. Don Kirby, a religious studies professor, said serving as a university’s first lay leader for the second time in a row won’t be a problem for Pestello.

“You have to have credibility with alumni and potential major donors,” Kirby said. At Le Moyne, “some people were very concerned what would happen to the Jesuit tradition, but he was very serious about maintaining our founding mission.”

But as with any university president, Pestello racked up his fair share of critics. One of them was Aubrey Zych, the editor-in-chief of Le Moyne’s student newspaper during Pestello’s tenure.

Zych said she and other newspaper staffers met with Pestello regularly and generally came away from those meetings confused by how Pestello’s words contradicted his actions.

Pestello took a lot of criticism during his later years in Syracuse for blaming employee layoffs on budget problems but then spending money on lavish office space and housing for administrators, she said.

“I felt like a lot of the times he wasn’t completely honest with me about the things that were going on on campus,” Zych said.

Robert Thurber, an assistant journalism professor, said Pestello would claim the university had budget problems even as executive salaries rose year after year.

“It became very distasteful to faculty members. There were lots of concerns over the high price and the number of consultants he was hiring,” Thurber said. “By the time he left, there was lots of grumbling that he was taking care of himself while others were struggling.”

A WAVE OF OPTIMISM

More than money, Pestello’s legacy at SLU may come down to how the university is governed.

The common wisdom is that Biondi wouldn’t have spent his last several years under duress if he had been better at communicating with faculty and students.

But it’s not the length of the tenure that can doom a president, she said. Rather, it’s the inability to adapt.

“As a university president, you are facing a number of challenges. Budgets are cut, board members have their own agendas, and there are going to be all sorts of unforeseen circumstances. What gets you through is the ability to change with the times and not be rigid,” Clausen said.

Hans Jeorg Tiede, an executive with the American Association of University Professors, said long-tenured leaders can do themselves favors by opening themselves up to periodic performance reviews.

“There really is no inherent problem with someone having a long tenure,” he said. “It’s really just a matter if a leader is serving with the confidence of the faculty and the board.”

SLU Board of Trustees President J. Joe Adorjan, however, said most of the controversy surrounding Biondi is “urban legend.”

He said faculty concerns over a lack of communication with the board either have been addressed or are in the process of being addressed.

He added that Pestello wasn’t chosen to be the anti-Biondi.

“We were after someone who understands the Jesuit mission,” Adorjan said. “We weren’t looking for a different kind of leader or a change agent. We wanted someone with experience.”

Adorjan’s view of the situation veers sharply from that of Bonnie Wilson, a SLU economics professor, who described the final months of Biondi’s tenure as a crisis.

Wilson said she’d like the Board of Trustees to give faculty and students more opportunities to be heard.

“When you go through a crisis, it’s indicative of an underlying problem,” Wilson said. “Just swapping one president for another won’t work.”

Despite the questions over governance, Pestello is likely going to be riding a strong wave of optimism as many in the SLU community believe they are heading for a fresh start.

In the weeks leading up to his arrival, faculty and alumni used the words “excited” and “hopeful” in describing their feelings about the new president.

Philosophy professor Theodore Vitali said based on a previous meeting with Pestello, he believes the new president will be open to significantly more collaboration than faculty members are used to.

“He’s not on a repair mission. He’s got a base to hold on to. He can parlay that into a strong institution,” Vitali said. “This is an opportunity that comes rarely. It’s right there for the doing. I think he’s going to do it.”

Koran Addo is the higher education reporter for the St. Louis Post-Dispatch. Follow him on Twitter at @KoranAddo

1984-2008 • He previously spent nearly 25 years as faculty member at the University of Dayton, a Catholic, Marianist institution, first as a professor and later in administration, rising to provost and senior vice president for educational affairs.

Family  • Pestello and his wife, Frances, have two children, Vitina and Freddie.

For would-be college students, asking for help is a critical part of the process.

Trustee board avoiding response to rumor Biondi will be retained

Fred P. Pestello, who serves as president of Le Moyne College in Syracuse, New York, reacts to kind introductory words at a press conference at DuBourg Hall on Friday, March, 21, 2014, where he was named new president of St. Louis University. Photo by Christian Gooden, cgooden@post-dispatch.com

Fred P. Pestello, who serves as president of Le Moyne College in Syracuse, New York, answers questions at a press conference at DuBourg Hall on Friday, March, 21, 2014, where he was named new president of St. Louis University. Photo by Christian Gooden, cgooden@post-dispatch.com