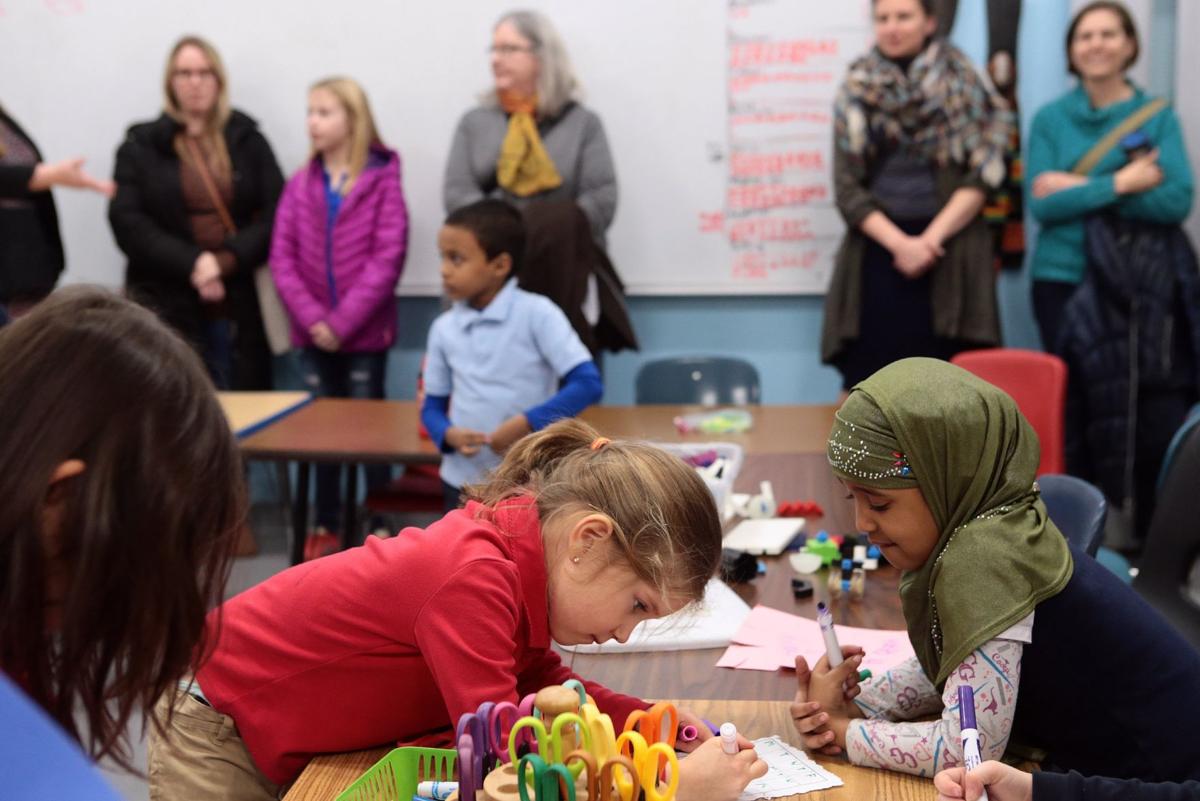 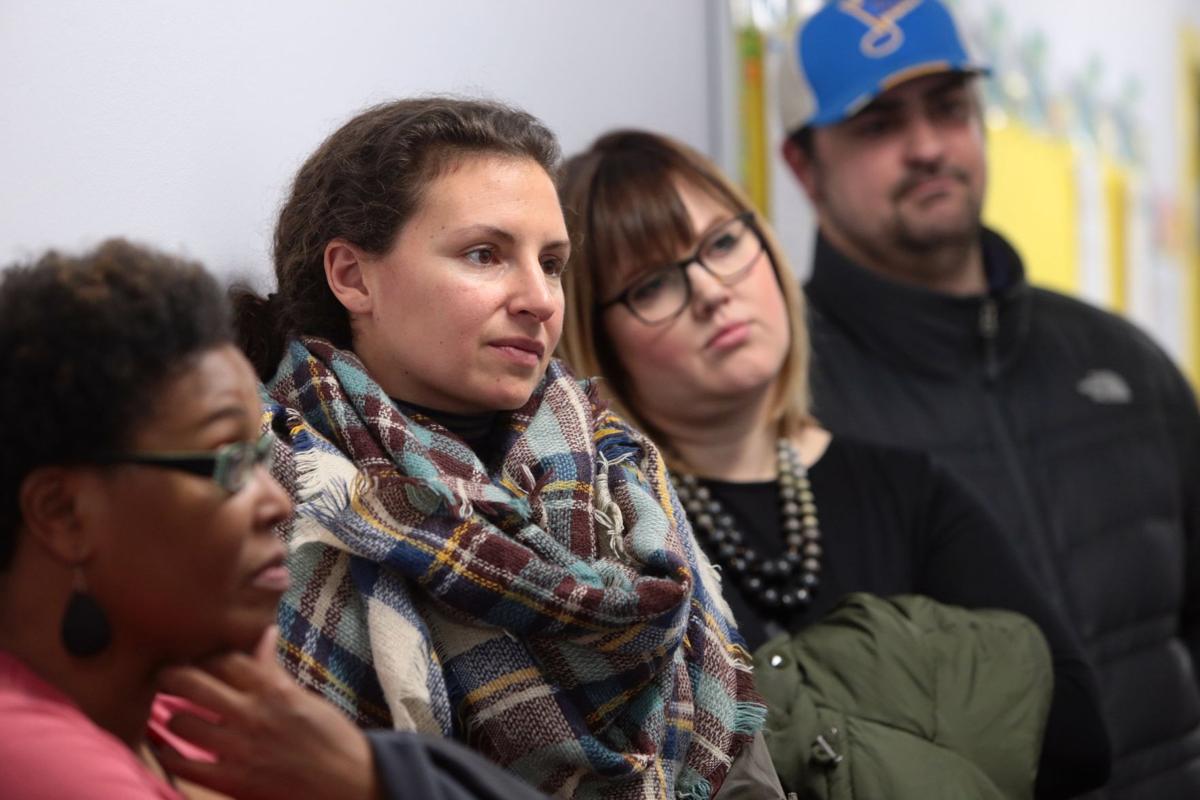 Christina Weaver (second from left), of St. Louis, listens during a tour for parents of prospective students at Lafayette Preparatory Academy on Wednesday, Jan. 18, 2017. Photo by Cristina M. Fletes, cfletes@post-dispatch.com 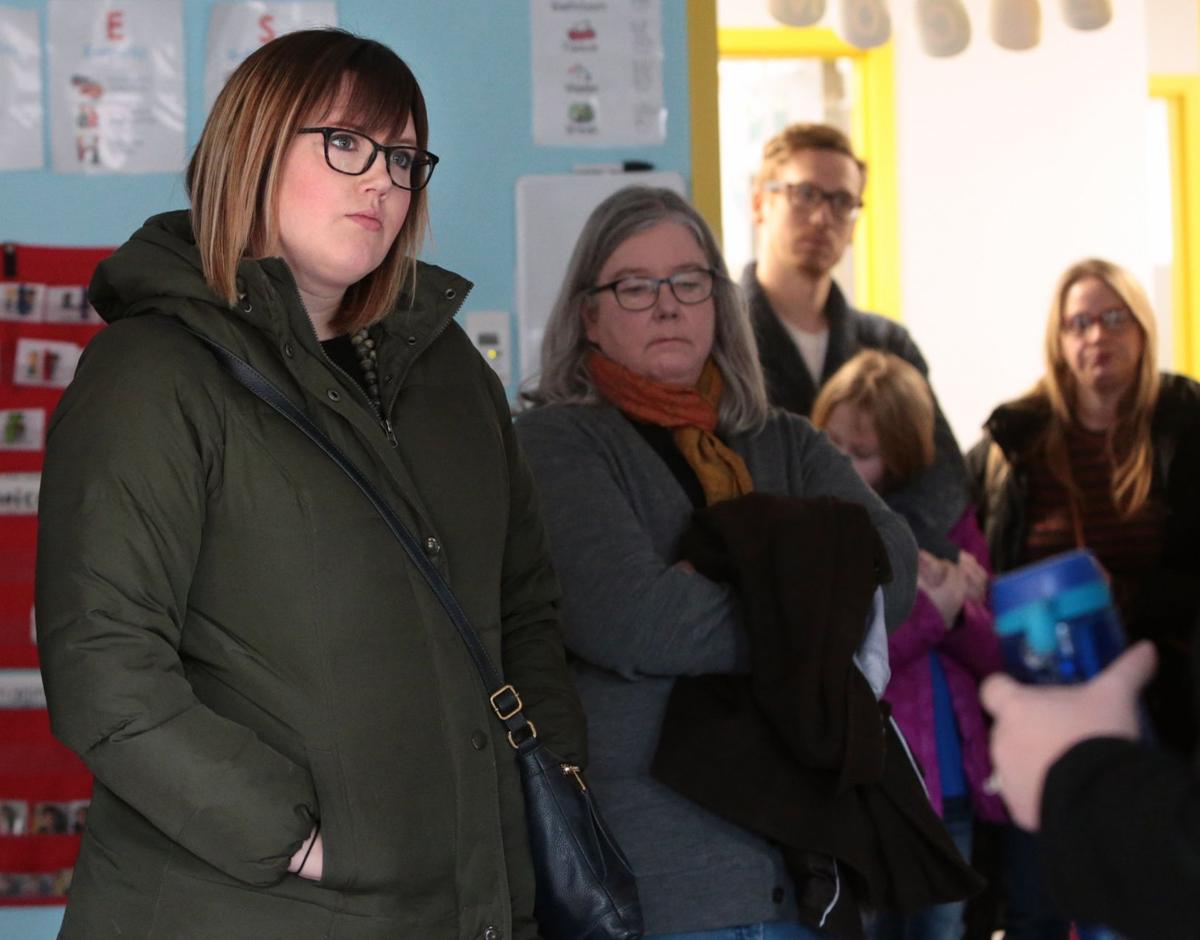 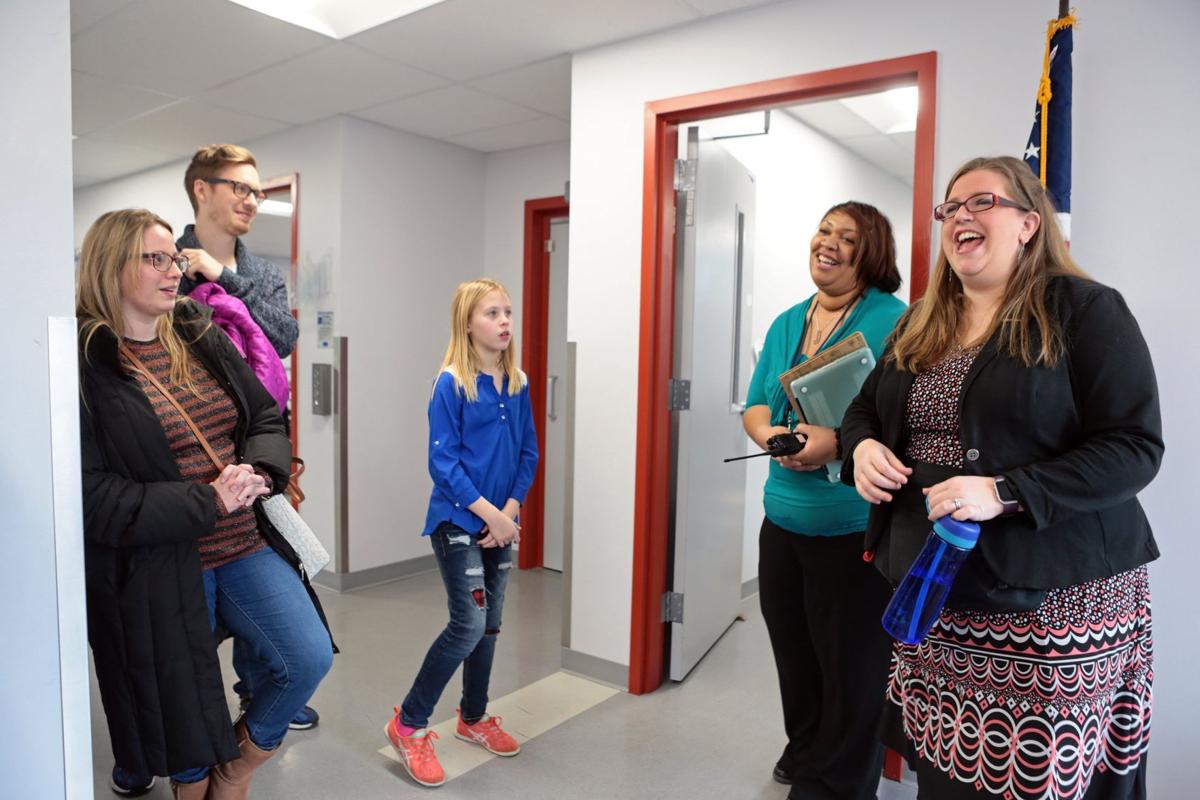 Meghan and Jeff Marino (left) and their daughter, Olivia, 7, of St. Louis, laugh with Cynthia Cobb (second from right), dean of students, and Sarah Ranney, head of school, during a tour for parents of prospective students at Lafayette Preparatory Academy on Wednesday, Jan. 18, 2017. Photo by Cristina M. Fletes, cfletes@post-dispatch.com 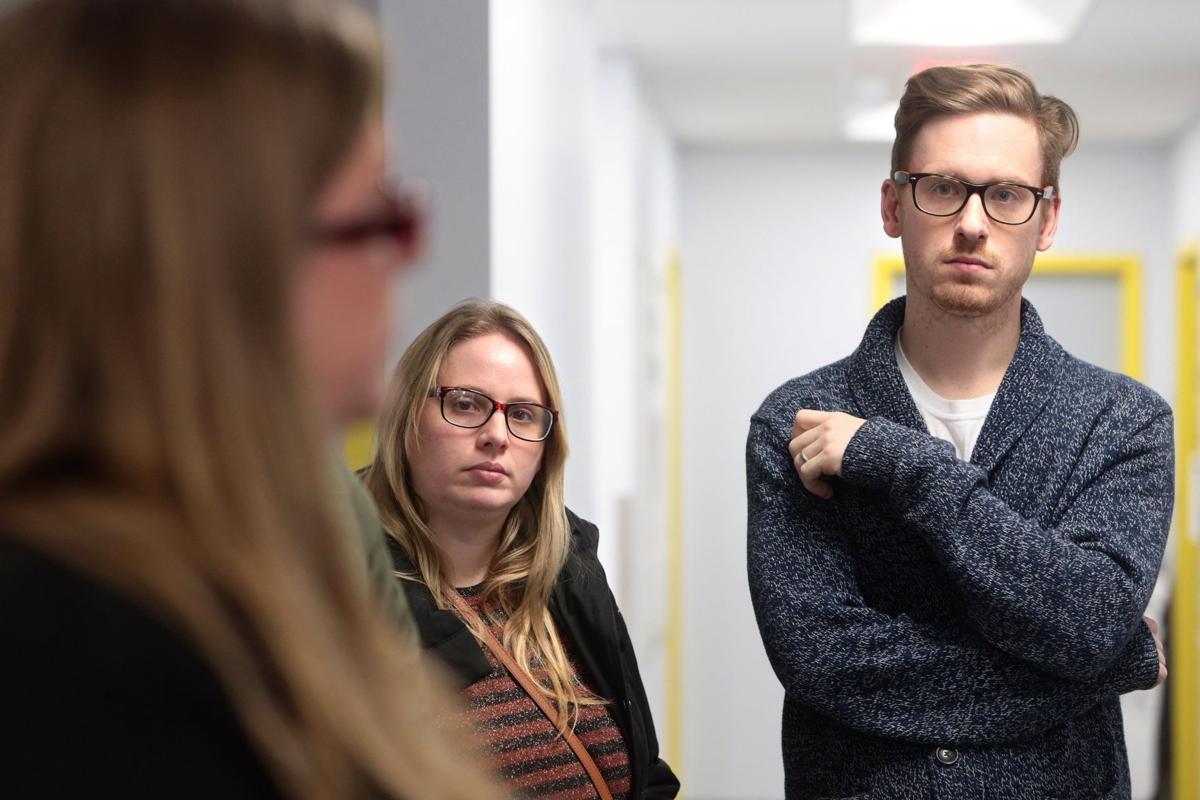 Meghan and Jeff Marino, of St. Louis, listen to Sarah Ranney, head of school, during a tour for parents of prospective students at Lafayette Preparatory Academy on Wednesday, Jan. 18, 2017. Photo by Cristina M. Fletes, cfletes@post-dispatch.com 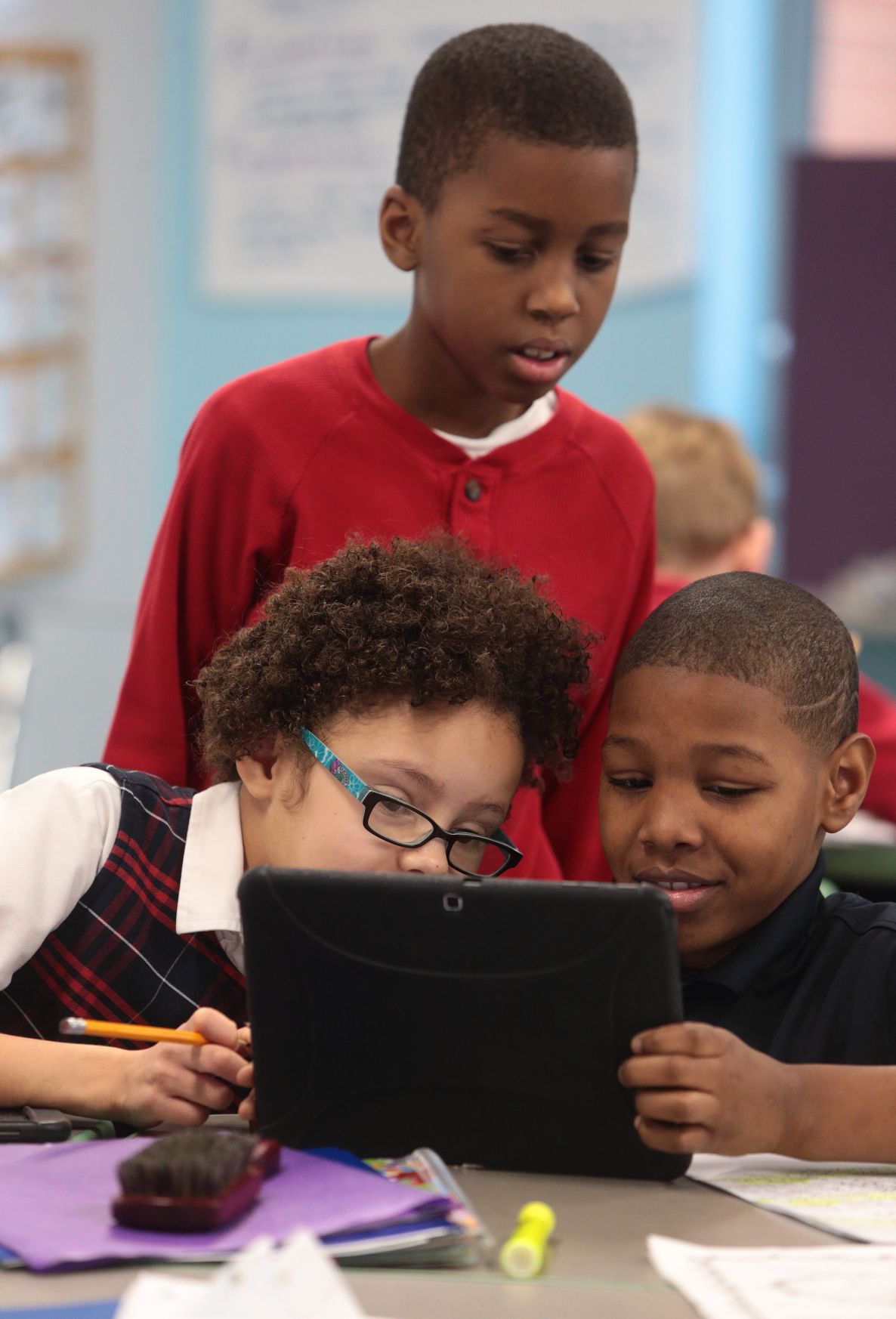 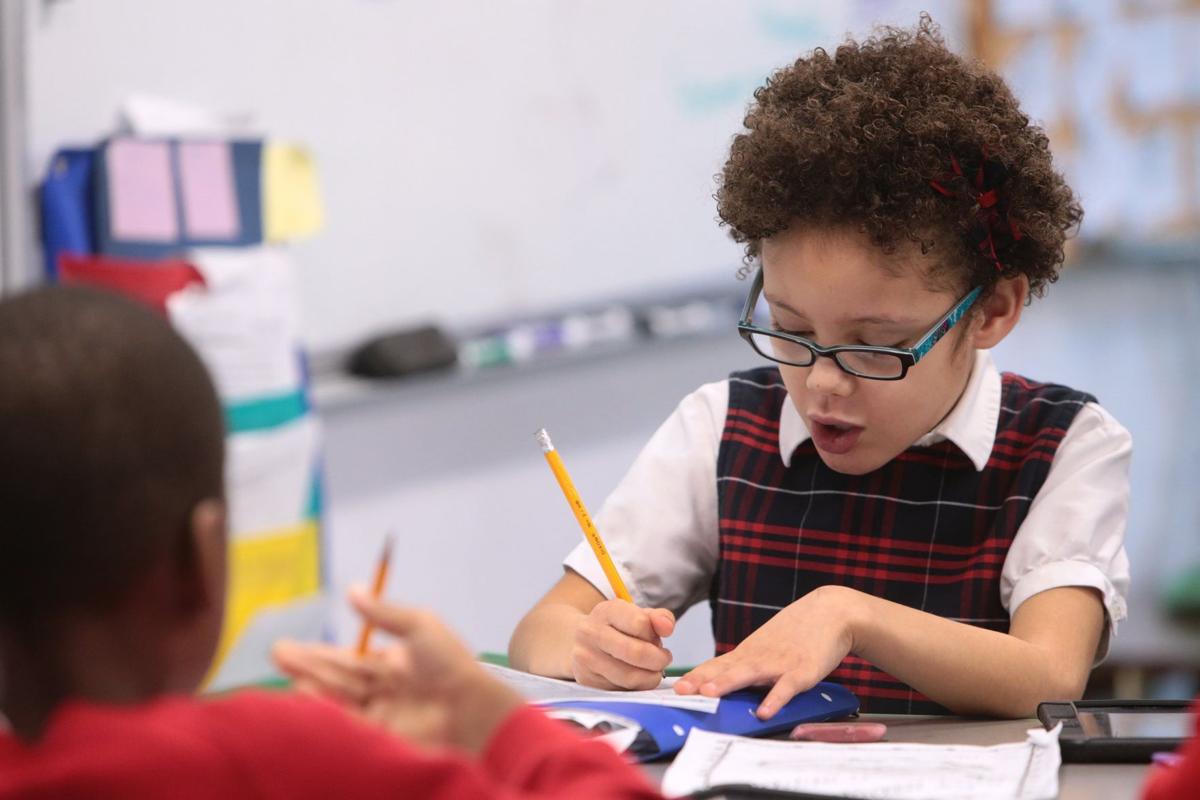 ST. LOUIS • A few of the city’s charter schools are becoming so popular that they’re struggling to stay accessible to low-income families.

That’s true for City Garden Montessori and Lafayette Preparatory Academy, where neighborhood construction and the schools’ own success have more parents competing to enroll their children. In the process, needy minority students are being edged out, as more seats go to children from more affluent white families.

It wasn’t supposed to be this way. Leaders of City Garden and Lafayette always intended the charter schools to be diverse alternatives to St. Louis Public Schools.

“We expect kids to grow up and be prepared to participate in a world that’s becoming more diverse,” said Bill Kent, president and CEO of The Biome, a diverse new charter school in the Central West End. “Yet in many cases, when kids come from low-income communities, we often educate them in isolation.”

So the three schools are working on a way charter schools can create their own income integration programs.

The key component of that effort is working to persuade the Missouri Legislature to grant charter schools more control over who they can admit. The Missouri Charter Public School Association is helping to draft a bill that would let charter schools designate a percentage of enrollment spots for students from low-income families.

But City Garden and Lafayette charter schools are becoming less diverse, particularly when it comes to socioeconomic status.

City Garden Montessori, offering kindergarten through eighth grade in the revitalized Botanical Heights neighborhood, has more than quadrupled in size since opening in 2009. Meanwhile, its percentage of students receiving free or reduced-price lunches — a measure of poverty — dropped to 42 percent this year from 53 percent at its start.

The vast majority of students at St. Louis Public Schools, in contrast, are eligible for subsidized lunches.

Lafayette Preparatory Academy in Lafayette Square offers kindergarten through fifth grade. It has grown by 100 students since its first year in 2014, while the percentage of students receiving free or reduced-price lunches dropped to 50 percent from 66 percent.

The Biome is focused on science education for kindergarten through second grade. It opened last fall, with 54 percent of its students from low-income families.

The three charter schools share many attributes that contribute to their popularity.

They’re racially diverse, in a city where most public school students attend schools that are vastly majority African-American. At the three charter schools, between half and three-fourths of students are nonwhite.

The schools also all operate in central-corridor, relatively diverse neighborhoods that are seeing development and families moving in — in some cases, just to attend those schools. They were started by parents and thrive on a grass-roots sense of community.

They’re small schools — City Garden is the largest at 221 students — and can therefore provide an intimate and personalized environment for students. They offer programs not commonly found in other public schools, such as mindfulness exercises and Singapore math at Lafayette and a St. Louis Zoo “micro-school” program at The Biome.

Most notably, these schools receive up to three times more applications than they can accept, even though Lafayette and The Biome are too new for the state to evaluate how well they perform academically.

When demand exceeds space, charter schools use random lotteries to admit students, which appear to give everyone the same shot at getting in. But the application deadlines, which are often in February, for those lotteries frequently end up favoring wealthier families.

Poorer families are less likely to be able to plan so far ahead when there are more immediate concerns to face, such as paying bills or making rent, said Susan Marino, Lafayette’s executive director.

State laws prohibit charter schools from admitting students based on factors such as race, income or qualifications like grades. Only when applicants exceed available seats can charter schools give preference to siblings of current students and to families who live in the immediate geographic area.

At the City Garden school, which opts to have a geographic admission preference, redevelopment in the neighborhood has worked against efforts to maintain a diverse student population.

White families of means have moved in, in some cases because of the school’s success. In the process, school leaders say black families have been less likely to enroll.

“Redevelopment is not bad. However, we are in favor of doing it with intention and transparency and plans of how to interrupt displacement of low-income families,” said Christie Huck, the school’s executive director. “The diversity is fragile.”

For example, City Garden started its geographic admission preference because the area around it was once 60 percent African-American and 60 percent low-income. Since then, Huck said Washington University researchers found that the number of African-Americans has dropped by half.

The most that charter schools can do is target low-income families in recruitment efforts. That means knocking on residents’ doors, educating through word of mouth, distributing fliers to minority businesses and recruiting at nonprofits that serve low-income families.

The struggle of maintaining a sizable low-income population is a unique one that applies to a small fraction of charter schools. In fact, most St. Louis charter school agencies are not collections of students of means, but homogeneous havens of needy students, reflecting the same socioeconomic and racial segregation that has long accompanied urban public schools.

Those nine include some of the city’s most struggling charter schools, like Preclarus Mastery Academy, which is on the brink of closure, and Confluence Academies, whose students scored as poorly as a provisionally accredited school district last year on state exams. Family income is one of the strongest predictors of academic success.

But those charter schools also include one of the city’s best, the North Side Community School, which received a perfect score last year on the state’s school report card and sits in a high-poverty neighborhood of north St. Louis.

Leaders of these schools say integration may be the ideal, but segregation is the reality in the city’s neediest neighborhoods.

“In a perfect world, we want schools to be places where we see individuals trained to be responsible and respectful of people who come from different communities. But let’s face it,” said Kelly Garrett, director of KIPP St. Louis. “There have been great reports on the legacy of race-based housing practices and patterns that have caused entire neighborhoods and communities to be completely segregated.”

Garrett and others acknowledge that diversity is a luxury they’re not really trying to achieve, because their school mission is specifically to serve the most disadvantaged students. In St. Louis, those students are most often in low-income, African-American neighborhoods.

“As they say in our neighborhood, we ain’t too diverse and we ain’t integrated,” John Grote, executive director of North Side Community School, wrote in an email. “Our mission is to serve low-income African-American students on the north side, and that is what we do.”

EDITOR'S NOTE: This replaces an earlier version that incorrectly spelled Bill Kent in the 4th and 7th paragraphs and incorrectly stated the grades City Garden serves.

Charter schools by percent of students who qualify for subsidized lunch

Watch now: 'We have a hypocrite in the house and his name is Sam Page'

Watch now: 'We have a hypocrite in the house and his name is Sam Page'

The Missouri Board of Education approved a five-year renewal for Confluence even though it hasn't met state expectations for several years.

These St. Louis charter schools have struggled for 14 years, but continue to evade closure

Whether City Garden Montessori can be replicated as a model for urban education is uncertain.

The executive director of City Garden Montessori is organizing a coalition to address housing and education disparities, hoping to become a model.

Christina Weaver (second from left), of St. Louis, listens during a tour for parents of prospective students at Lafayette Preparatory Academy on Wednesday, Jan. 18, 2017. Photo by Cristina M. Fletes, cfletes@post-dispatch.com

Meghan and Jeff Marino (left) and their daughter, Olivia, 7, of St. Louis, laugh with Cynthia Cobb (second from right), dean of students, and Sarah Ranney, head of school, during a tour for parents of prospective students at Lafayette Preparatory Academy on Wednesday, Jan. 18, 2017. Photo by Cristina M. Fletes, cfletes@post-dispatch.com

Meghan and Jeff Marino, of St. Louis, listen to Sarah Ranney, head of school, during a tour for parents of prospective students at Lafayette Preparatory Academy on Wednesday, Jan. 18, 2017. Photo by Cristina M. Fletes, cfletes@post-dispatch.com