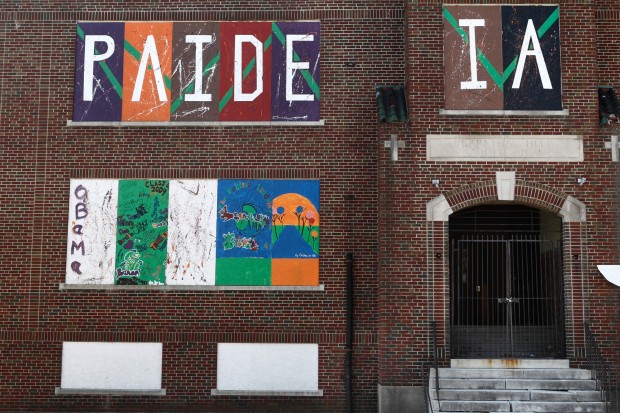 Murals decorate the exterior of one of Paideia Academy's buildings on Linton Avenue in St. Louis on March 2, 2011. Erik M. Lunsford elunsford@post-dispatch.com 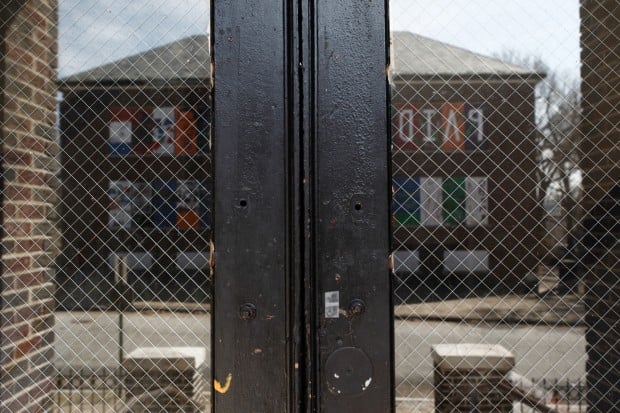 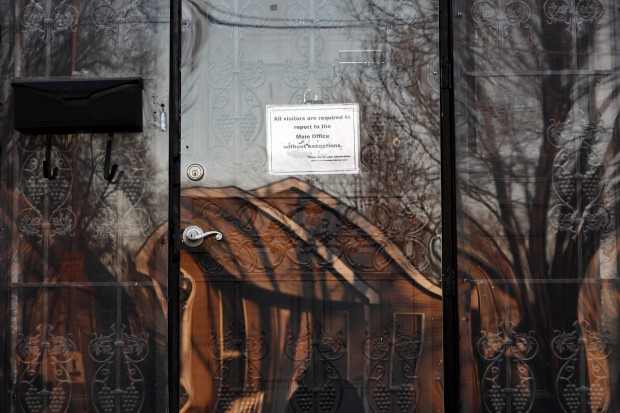 A sign reminding visitors to report to the main office remained posted at one of the entrances to a Paideia Academy campus on Linton Avenue in St. Louis on March 2, 2011. Erik M. Lunsford elunsford@post-dispatch.com 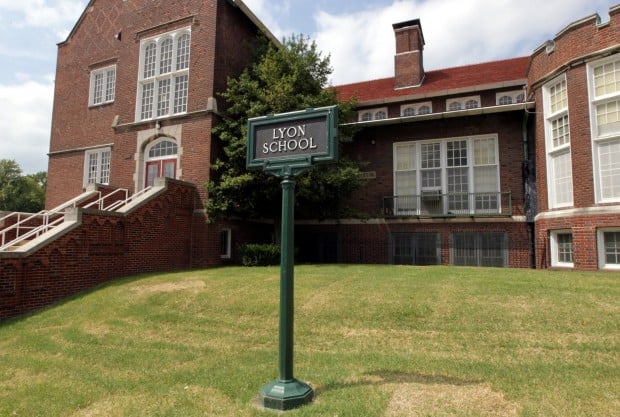 Tuesday, August 31, 2010 - Windows are shattered, weeds grow in the vacant parking lot and no one is coming and going at the site that the Paideia Academy claims is its new Carondelet campus. Formerly SLPS's Lyon School, the district says they have not leased the vacant building to anyone. The director of the Paideia Academy announced her school will reopen next week as a tuition-free public school via television and radio ads, despite the fact the state yanked its charter last year. Elie Gardner egardner@post-dispatch.com
BY ELISA CROUCH • > 314-340-8119

ST. LOUIS • The teachers are gone. The classrooms that once held hundreds of children are empty.

School administrators also have stopped coming and going from Paideia Academy, nine months after the charter elementary school in the College Hill neighborhood in north St. Louis was shut down by the state.

Missing, too, is nearly a half-million dollars in state and federal money - tax dollars that only school organizers had access to. It's cash that flowed from taxpayers to state and federal coffers, then through the Missouri Department of Elementary and Secondary Education to the charter school. It came at a rate of about $6 million to $7 million a year.

The money was to be used for such things as school lunches, special education services, textbooks and summer school for Paideia campuses in north and south St. Louis.

But when Paideia (pronounced pie-DAY-uh) lost its charter on June 15, after years of academic failure, it no longer provided these services for its 524 students. Buses were no longer needed to transport them. Teachers were not needed to teach them.

Even so, the Missouri Department of Education made no attempt to retrieve and redistribute more than $454,000 that state finance records show was left in the school's bank account on June 30, state officials have said. Administrators at Paideia made no attempt to return the money. And no record produced by the state shows how it was spent, or whether any of it remains.

"I can tell you it wasn't spent on the kids, because there were no kids," said Ron Shaw, a former Paideia employee.

A federal investigation into the school is under way, the Missouri Department of Education confirmed. The state auditor's office has also asked questions.

"We are aware of the situation surrounding Paideia Academy and have been in contact with the Department of Elementary and Secondary Education on the matter," said Gary McElyea, spokesman for Missouri Auditor Thomas Schweich.

Fred Robinson, president of the school's board of directors, wouldn't answer questions from a reporter on how the leftover money was spent but said an annual audit submitted to the state contained "all the information you need to know." The audit, due Dec. 31, still has not arrived at the Missouri education department, a spokeswoman said.

The situation highlights what many regard as a weakness in the state's charter school laws, and a reluctance among state officials to step in and enact administrative rules when state statutes fall short.

In the case of Paideia, state regulators didn't have the authority to take back unspent money, state education officials say.

Charter schools are independent public schools. They use public funds to operate but are not subject to all of the rules, regulations and statutes that apply to traditional public schools.

Without a charter, which outlines the school's mission and standards, a school cannot receive public money.

According to the U.S. Department of Education, the state education department is responsible for redistributing whatever federal dollars remain when a charter school closes.

But in Paideia's case, state education officials say their hands were tied. The school legally became a nonprofit organization the day it lost its charter, and the state education department "does not have statutory or regulatory authority to intervene in the financial holdings of a nonprofit organization providing charter school services," said Michelle Clark, department spokeswoman, in an e-mail.

In the 11-year history of charter schools in Missouri, five have closed. In several cases, the schools had failed financially and had no leftover funds.

But in 2005, Thurgood Marshall Academy at 4300 Goodfellow Boulevard closed with money in the bank. The Missouri education department did not step in to take back leftover funds, saying there was no policy dictating how to do it.

The following year, William Dent, the board president, was convicted of stealing more than $7,000 from the school before it closed, including $800 in school lunch money.

Two campuses opened that fall. Eventually the school became Paideia Academy, which operated as a charter school at 5223 North 20th Street and at 7604 Michigan Avenue in the Carondelet neighborhood on the south side.

Like thousands of parents who have chosen charter schools, parents who sent their children to Paideia were looking for an alternative to struggling city schools. Paideia offered smaller class sizes, more personal attention and little bureaucracy.

"Despite what people say about Paideia, Paideia was very nurturing to the children," said Deborah Jones, who worked there as a counselor.

Even so, the school was rife with infighting and poor test scores. Last school year, the school ranked among the four worst charter schools in the city based on standardized test scores. In most grades, fewer than 10 percent of students tested proficient in reading or math.

In June, the Missouri University of Science and Technology pulled its sponsorship of Paideia, citing the lack of learning. Later that month, the state Board of Education did not renew Paideia's charter, citing its lack of a sponsor.

The day Paideia lost its charter, state financial records show, the state education department transmitted $25,210 in Title I money to the school. Title I money goes to schools with large concentrations of students living in poverty. The money is to go toward improving teaching and learning for those children.

When those payments were made, state officials knew Paideia had a fund balance of more than $400,000 after it lost its charter. Mark Van Zandt, attorney for the department, indicated in an e-mail that the transmittals were not a mishap. The payments to Paideia were made to reimburse the school for expenditures in the 2009-10 school year, he said.

"Payments to Paideia Academy were made in the same manner as payments for other local education agencies, both school districts and charter schools," he wrote.

Except for the federal stimulus money, the state made no other payments to Paideia after June 30, state financial records show.

In August, signs appeared in south St. Louis announcing that Paideia would open a school in a new location, inside the vacant Lyon School building owned by St. Louis Public Schools. Paideia had lost its lease on its Michigan Avenue building.

"Prepare your child for the best life possible with the best education available at the Paideia School," she said in the 30-second television spot. "The Paideia School is a tuition-free public school with campuses in north and south St. Louis."

She encouraged parents to enroll their children. And that month, an enrollment station was set up inside the administration building on North 20th Street.

But contrary to Johnson-Pruitt's claims, Paideia never had a lease agreement with the school district to use Lyon School. The day a newspaper article exposed the situation, school officials reversed course and told parents Paideia would not reopen and to enroll their children elsewhere.

It was then that the Missouri auditor's office received a tip that something at the school was awry.

Federal officials also would not elaborate on any investigation into the school. The state education department is not a subject of that investigation, sources say.

Contacted Thursday on her cell phone, Johnson-Pruitt said she was at the dentist's office and couldn't talk. She did not answer phone calls or return a message Friday.

The unknowns surrounding Paideia and its leftover money have charter school supporters pushing for stronger laws in the Legislature.

A pending House bill would make the sponsor of a charter school responsible for determining what happens with leftover funds if the school were to close.

"We want to have really clear guidelines around charter school closure," said Cheri Shannon, executive director of the Missouri Charter Public School Association. "I have been really troubled by that with Paideia."

Since the first of the year, neighbors say the traffic of people at the administration building, which continued for months after the school lost its charter, has stopped.

The doors are locked. But the lights inside the school building are still on, and a mop is propped up in a hallway, visible from a side door. A faded mural still hangs over a door of the school. "Enroll Now," it says. "Classes begin Aug. 20th." Anyone who calls the number on the mural will learn that the phone has been shut off.

The last reported activity at the school was on Dec. 3, one former teacher said. That day, she said, school administrators invited former teachers and staff to the administration building for a Christmas party.

Chairman for the now-defunct Paideia Academy was arrested by federal authorities on multiple fraud charges.

ST. LOUIS • Officials at Paideia Academy said Thursday that they will not be opening their doors for class next week, contrary to their assert…

Promises of opening appear to be empty at charter school

Charter schools learn from past mistakes

If anyone represents the state of St. Louis' charter school movement, it's Patrice Coffin, who walked the halls of a south St. Louis school building recently and surveyed the renovation work.

The troubled St. Louis charter school is one step closer to closing its doors for good.

Another troubled city charter school likely will not reopen this fall, sending hundreds of students shopping for another school.

At the recommendation of Missouri Education Commissioner Chris Nicastro, the State Board of Education voted 5-0 today to deny Paideia Academy’…

Murals decorate the exterior of one of Paideia Academy's buildings on Linton Avenue in St. Louis on March 2, 2011. Erik M. Lunsford elunsford@post-dispatch.com

A sign reminding visitors to report to the main office remained posted at one of the entrances to a Paideia Academy campus on Linton Avenue in St. Louis on March 2, 2011. Erik M. Lunsford elunsford@post-dispatch.com

Tuesday, August 31, 2010 - Windows are shattered, weeds grow in the vacant parking lot and no one is coming and going at the site that the Paideia Academy claims is its new Carondelet campus. Formerly SLPS's Lyon School, the district says they have not leased the vacant building to anyone. The director of the Paideia Academy announced her school will reopen next week as a tuition-free public school via television and radio ads, despite the fact the state yanked its charter last year. Elie Gardner egardner@post-dispatch.com
© Copyright 2022 St. Louis Post-Dispatch, 901 N. 10th St. St. Louis, MO 63101 | Terms of Use | Privacy Policy | Do Not Sell My Info | Cookie Preferences
Powered by BLOX Content Management System from TownNews.com.
You don't have any notifications.