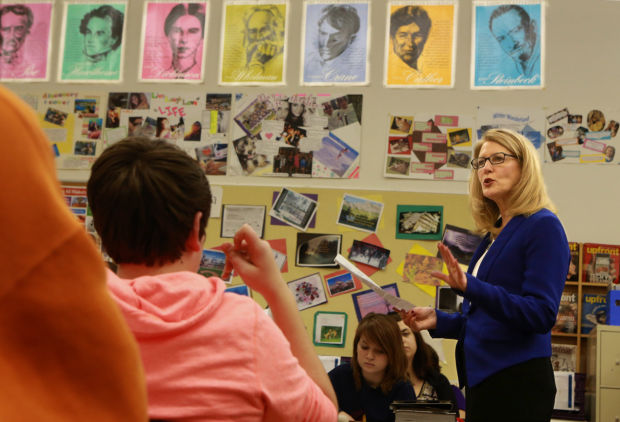 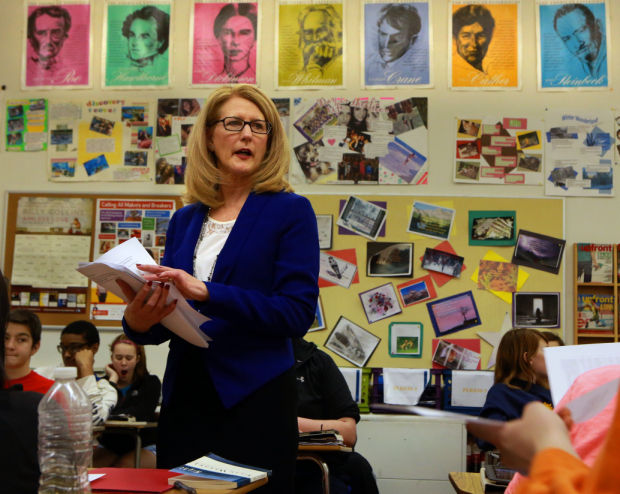 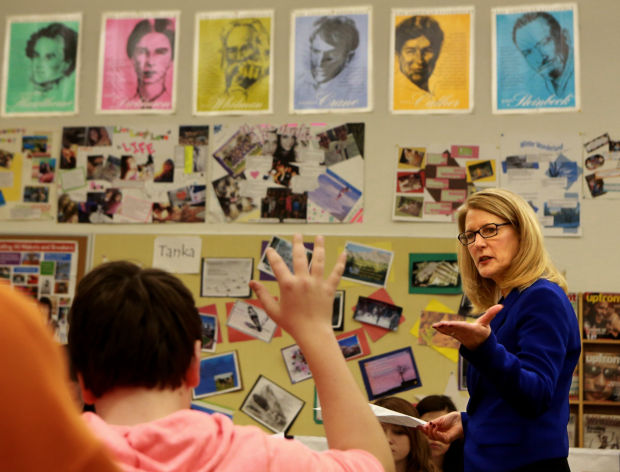 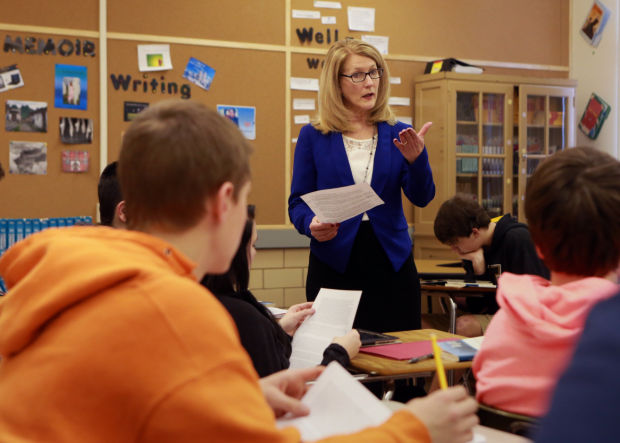 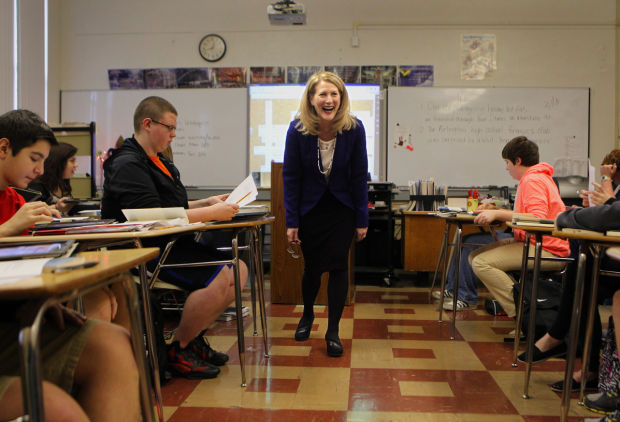 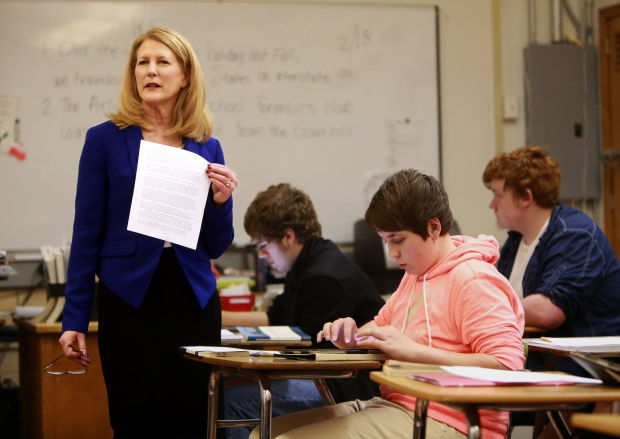 Affton High School teacher Cathy Cartier wondered if any of the Missouri legislators who are debating bills that would abolish new learning goals had ever seen them in action.

So she invited them to her classroom.

As a staunch supporter of the controversial Common Core Standards, Cartier wanted legislators to observe one of her English classes.

“The Common Core standards may be national, they don’t dictate what I do in my classroom. They’re just good goals for my kids,” said Cartier, the 2013 Missouri Teacher of the Year.

Forty-five states, including Missouri and Illinois, have adopted the standards, meant as a way to ensure that all students across the nation learn the same skills and catch up with other countries academically.

The standards have become a lightning rod for criticism, particularly among conservatives who say they impose a national template for learning, trampling local decision-making in the process. Opposition has mounted in several states to slow or stop their adoption.

But supporters say national goals for reading, writing and math skills for students in kindergarten through high school graduation are needed. They say the Common Core promotes more critical thinking.

The standards, which grew out of a collaboration among the nation’s governors, are intended as a framework. Districts and schools choose a curriculum that meet those standards.

Still, Missouri legislators are debating two bills to repeal the standards, which were adopted by the state’s education department four years ago.

Lawmakers say that the state Legislature should have had a say in that process, and that Missouri and other state education officials caved to pressure from the federal government.

“We were bypassed, we were ignored,” said Rep. Kurt Bahr, R-O’Fallon.

Like many teachers, Cartier has been studying the standards for a few years. As one of the curriculum chairs in the Affton School District, she has helped moved lessons toward those goals in preparation for new state tests based on the standards next year.

“I see the value of it, and I know it will make (students) more prepared for college,” said Cartier.

On a recent day, the sophomores in Cartier’s English class were getting ready for a unit on “Night” by Elie Wiesel, an autobiography about a teenager in a Nazi concentration camp.

Before the students dived into the book, Cartier asked them to read a few pieces to prepare them for the themes the novel addresses. With their desks arranged in a large circle, they debated questions about how silence can perpetuate violence, and cited examples from the writing in their arguments.

“I don’t necessarily think if you talk about it, it’s going to stop it,” said Tonyelle Temple, in response to another student’s ideas. “We always talk about bullying, but it still happens.”

Cartier said she wanted legislators to know that the new learning standards in Missouri hadn’t dramatically changed the titles her students read in class. “Night” has been a part of her curriculum for years. But her students now read more complex pieces of writing related to those books, such as they did this month.

Englund serves on the House Education Committee and favors keeping the standards. “People think it’s this book list that everyone has to follow, and that’s just not the case,” she said.

Bahr, one of the sponsors of a bill to repeal the standards, said his concerns included the standards themselves, the privacy of student data and the loss of local control.

Some have poked fun at the critics. Last week, Rep. Mike Lair, R-Chillicothe, joked about appropriating money for tinfoil hats for the “conspiracy theorists” against Common Core. Bahr was not amused.

“It’s a question of what the government is going to put into our children’s heads,” said Bahr, who cited membership in the St. Charles County Christian Home Educators in campaign material.

The bill in the Missouri Legislature to prevent the rollout of new standards was approved by a House committee on Wednesday. Last year, the bill made it out of committee but was never debated on the House floor.

Bahr said that the implementation of these new standards would cost millions and that the standards themselves were flawed and untested.

“Let this education experiment be done on other people’s kids,” Bahr said at a five-hour hearing on the bill last week.

Some lawmakers criticized the state Department of Elementary and Secondary Education for acting without input from the Legislature. Others pointed out that local districts were free to adopt more rigorous requirements beyond the Common Core. The standards for grade-level learning also can help children who move around frequently, supporters say.

Mark Knight, the president of East Newton School Board in Granby, Mo., said that his school district began using the standards but that parents were concerned by the changes. The district is moving ahead with the standards, but Knight said he opposed them.

“We will be marching and learning in unison to the thoughts of only a few,” Knight said. “Local control will be gone.”

The standards were developed with bipartisan support by the National Governors Association, which began pushing in 2009 for common standards in English and math. The administration of President Barack Obama supports the standards and has made them requirements for federal grants and waivers.

Missouri Education Commissioner Chris Nicastro and her department have tried to dispel what they say are misconceptions about the Common Core, holding question-and-answer meetings across the state in the last year.

But Sen. John Lamping, R-Ladue, who is sponsoring a bill similar to the one in the House, saw those efforts as a public relations campaign, not an effort to seek real public input.

“The adoption of Common Core took place by the stroke of a pen,” he said. “The entire thing came to be without anybody knowing about it.”

By spring 2015, the state will replace its Missouri Assessment Program test with one based on the new standards.

State education officials say that 36 percent of Missouri high school graduates end up in at least one remedial course in public colleges or universities. That figure, educators say, justifies the need for the standards.

“We have our head in the sand if we think there’s not a problem,” Cartier said. “I firmly believe all of these things are going to make them more ready.”

A look at the Common Core

The Common Core Standards include detailed lists of what concepts ought to be taught when to students in grades K-12.

Missouri, like most states, is now reworking its standards to conform.

In some cases the Common Core is more rigorous than the former state standards.

The Common Core requires them to:

In other cases, the Common Core seeks earlier skill mastery.

Common Core asks fourth-graders to determine the theme of a story, drama, or poem from details in the text, and to summarize the text.

The Missouri standards expected that of seventh-graders, focusing more generally on having fourth-graders "identify and explain the relationship between the main idea and supporting details."

In many cases, the Common Core and Missouri standards were largely in agreement.

Common Core for writing in grades 11 and 12 says students should:

"Establish and maintain a formal style and objective tone while attending to the norms and conventions of the discipline in which they are writing."

More lawmakers should see what award-winning teacher is doing

I believe in the power of stories

Reality of Common Core is awful

Like Jamie Manker (Other Views, March 28), I believe in the power of stories, but I do not believe the story of Common Core is a positive one.…

A return to low academic standards for Missouri?

Common Core has strengthened state's standards; we shouldn't go back.

No spanking in schools across Missouri under lawmaker's proposal

Most experts condemn the practice, but the law allows it in some cases.

If it is true that the Common Core state standards are a federal takeover, then how is it Missouri can simply vote them out? The Post-Dispatch…

New standards in math, English cause furor in Jefferson City

Critics fear a loss of local control of schools.

Advocates of the Common Core say there is no federal orchestration.