Think homework can help your kid's grade? Think again
0 comments
Share this
Subscribe for $3 for 3 months
1 of 3 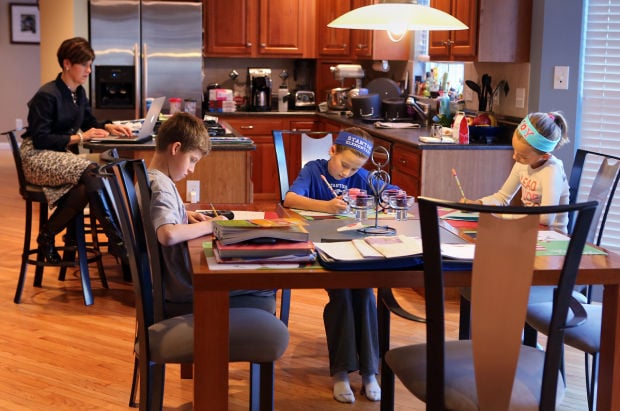 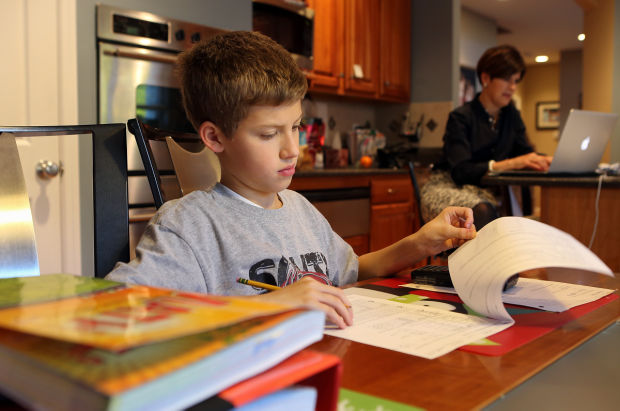 The proud parents who attended Lincoln Elementary’s honor roll assemblies years ago assumed the school was a shining example of academic achievement.

Kids by the dozens lined up to be celebrated for earning grades that put them on the honor roll.

Then the school in St. Charles got state test results.

Most of the students failed, casting doubt on the school’s success and challenging the validity of many of its students’ glowing report cards. Administrators knew they had a problem.

What they did next upended everything parents, teachers and students thought they knew about grading.

St. Charles joined a national movement that — sometimes amid a formidable backlash — is rebuilding how a child’s performance in a class or course is calculated.

It’s a switch that seeks to move away from rewarding students merely for completing work, and instead bases grades on mastery of a subject.

Swept away are points for finished homework assignments, or good behavior and class participation. Instead, grades are more heavily based on exam results and the quality of work.

“There are kids that are good at playing the game of school,” said Julie Williams, principal of Lincoln Elementary, which began to overhaul grading along with other St. Charles elementary schools in 2008. “If you don’t ever do well on tests, but you raise your hand every time, those kids can score well in the traditional system. But when they are tested on a state tests, it exposes the weaknesses.”

St. Louis-area school districts such as Rockwood, Parkway and Pattonville also have tried new ways of looking at grades. Each district varies in its use and how widespread the concept is, but the ideas have all evolved from what’s called standards-based grading. And some of those details have sparked opposition.

Critics say the approach may sound good as a concept. Who doesn’t think grades should be based on what kids are actually learning?

But what that means in the classroom or at home is another matter, they say.

Take, for example, the de-emphasis of homework in a student’s final grade for a subject.

Under standards-based grading, students face no penalty — pointwise — for failing to turn in homework. Instead, homework is viewed as simply a tool to help them master a subject.

There are no zeros. Moreover, students can redo assignments multiple times and even retake tests.

The changes — which run counter to how school has functioned for generations — have triggered fears from parents who worry their kids would simply slack off.

Some Rockwood teachers say the concept isn’t working in the schools that have adopted it.

“It was 45 minutes of gnashing of teeth,” said Paul Bozdech, a parent at Rockwood’s LaSalle Springs Middle School. “The general mood of the room was, ‘This isn’t how I had it growing up.’”

New approaches to traditional grading have picked up steam in the last 15 years, an era of accountability on teachers and schools that has more recently focused on individual student growth in learning.

Schools also have a new set of standards to measure that growth by. In the last few years, nearly all states also have adopted the Common Core, an outline of what a child should know and be able to do in each grade.

Such a shift has introduced discrepancies like the one at Lincoln Elementary, with results of standardized testing seeming to be at odds with how student performance is reflected in report cards.

That has led educators to question what the grades they gave were really saying about what a student knew.

And there are other troubling discrepancies, such as straight-A students in high school not performing as well on the ACT, or being forced to take remedial courses in college.

“High school is free; if you fail in college, you have to pay,” says Ken O’Connor, a former teacher turned author and consultant known as “The Grade Doctor.” “We don’t do kids any favors when we inflate their grades because at some point, they are going to fall on their face.”

At the heart of standards-based grading is the thought that students should be awarded grades for demonstrating they have mastered a subject — not for the work they completed along the way.

Advocates of the idea say traditional grading can mask academic failure. For example, a student might score no better than a D when tested in math. But because traditional grading awards points for handing in math homework, that student may earn a C or better in the class.

“The learning is what it’s important, it’s not just the ‘check off’ of getting the grade in the grade book,” said Karen Hargadine, executive director of pre-K and elementary education for the Rockwood School District, which has been phasing in the standards-based model.

Under the new grading approach, the focus on mastering a subject is so important that students are given new latitudes.

For example, if they bomb on a test, they can retake at least that portion of it. The same thing goes for other assignments, which, depending on the school, could be resubmitted for a better grade.

And its on those points that some parents such as Bozdech disagree with what they view as a lack of real penalties or immediate consequences.

When Ethan Dobbs heard his Algebra I teacher at Parkway North High School say they would be able retake portions of tests, he almost couldn’t believe what he was hearing.

“I realized immediately it was going to be a little bit different,” he said.

Homework also wasn’t factored into a final grade. Students who had taken the class the year before were jealous — it seemed like the younger kids had it easier than they did.

And while some kids “kind of abused” the homework policy, Dobbs said most students got the idea that if they didn’t do the work, they probably weren’t going to know what they were doing on the test. Teachers could also give poor “citizenship” grades, separate from academic marks.

“There’s always a repercussion in some way,” said Dobbs, now a junior.

“We have a culture of points, percents and letters,” Beckner said. “Just doing what you were told, doing your homework, got you points, helped your grade. Those things are life skills that are really important, but we don’t want to report them in exactly the same way as learning.”

For teachers, the shift away from traditional classroom grading can be scary.

Katie Nease gradually began to make changes in her middle school classroom in Rockwood over 10 years after the district began to discuss standards-based grading. She initially was concerned that students were not going to do the work she knew they needed.

Not counting homework and not marking zeros were the most frightening changes, but had the most payoff, she said.

“Once I made that shift, it was remarkable the changes I saw in the classroom,” said Nease, now a social studies content facilitator in Rockwood. “For some students, getting a zero was a pass out. This sends a message that your learning is important.”

Teachers who like standards-based ideas say they still stress the importance of doing homework, by notifying parents if its not complete or not allowing students to retake tests until they complete the assignments. A few schools are even trying having students stay in during recess until missing homework is complete.

Still, there are some teachers and parents who say the new ideas are not in line with their expectations for kids.

In a Post-Dispatch letter to editor this month, a Lafayette High teacher said the policies conflicted with future employers’ expectations of timely, proficient work, and that due dates were impossible to enforce.

“Parents trust that schools are preparing their children for life after high school,” Melissa Schumacher wrote. “We are letting them down.”

She declined to be interviewed for this story, but she is not alone in her concerns. Several teachers spoke to Rockwood School Board members in December saying there with issues with consistency. They fear the students who are not high achievers are being left behind. And they say that not having immediate consequences for not getting assignments done is problematic.

Administrators admit that Rockwood has had some confusion and misunderstanding about grading, and say they are working to be more consistent and provide more detailed teacher training. But they believe the revamped grading practices are what’s best for students, requiring them to demonstrate what they know and are able to do.

“There is not a parent around or an educator that doesn’t want a child to learn,” said Jim Wipke, Rockwood’s executive director of secondary education. “Is it an easy process? No.”

Rockwood officials also point to teachers who have been pleased with the outcome in their classrooms.

Becky Stevenson, an English teacher at Eureka High School, serves on the district’s grading and reporting committee. She has been using pieces of the ideas in her classroom for at least five years, and gives feedback on homework even though it is not counted in the final grade. She says her students have shifted from focusing on getting a good grade to a desire to learn.

“They can practice without penalty,” she said. “There are many, many teachers using these best practices with a passion. We’re seeing a change and it’s pretty powerful.”

Kathy Gettinger, who has a son who is a freshman at Lafayette, said whether homework counted on a final grade or not, it still is required at their house. And she gets the message Rockwood is trying to instill in its students.

“You don’t just try to skate by just because something is not required of you,” Gettinger said. “Your grade suffered. It doesn’t pay off.”

The most frequent question Tom Guskey gets about standards-based grading is whether it will help students learn more. Guskey, a professor in the College of Education at the University of Kentucky, is working with schools there and has studied the issue for years.

Right now, he can’t point to any studies that prove it does.

But he also says that doesn’t matter.

Grade reform is more about getting accurate information to families and students, he says.

At Lincoln Elementary in St. Charles, Williams says the shift has made it clear to teachers what the skills and standards are at each grade level. If a student hasn’t met them, teachers are focused on what they can do to help them progress, she said.

Since the change, Lincoln has moved from the bottom of the district in its performance on state tests to the top. In 2013, 71 percent passed reading and 80 percent passed math — double the percentage from 2010.

“It’s just been very powerful,” she said. “It’s clear to us this is what’s best for kids.”

This story includes reporting by Colleen Schrappen, special to the Post-Dispatch.

This map shows what percentage of a school's students in 2013 scored as proficient or advanced in ...

Use the drop-down to zoom in on a particular school district.

Go back to traditional methods of education

The excellent article "Schools rethink grading" (Dec. 22) had a near bull's-eye on the solution to several decades of poor academic achievemen…

Students' homework should be graded for quality

I am puzzled by the comments from parents and teachers reported in your article "Schools rethink grading" (Dec. 22). It is proposed that stude…

Program could make the school a destination for students and teachers who want to learn about biofuels.

Explore how individual schools in the St. Louis region scored in various subjects areas by using the controls below.