COLUMBIA, Mo. — Faculty representatives at the University of Missouri-St. Louis this week raised concerns about a proposal they say could decrease the autonomy of their campus and shift more power to the state university system’s Columbia campus.

The UM System Board of Curators could vote on a reorganization plan as early as Tuesday. Four of six options the board is weighing would merge the roles of the UM System President and the MU Chancellor.

Mun Choi, the UM System President, is already serving as interim chancellor of the Columbia campus.

Faculty at the University of Missouri-Kansas City and Missouri S&T in Rolla have also voiced concerns about the merger, the Columbia Missourian has reported.

Faculty opposition comes at a particularly tricky time for Choi, who is defending himself after attracting criticism in recent weeks over concerns he was trying to snuff out dissent related to the university’s decision to keep a statue of Thomas Jefferson on campus. 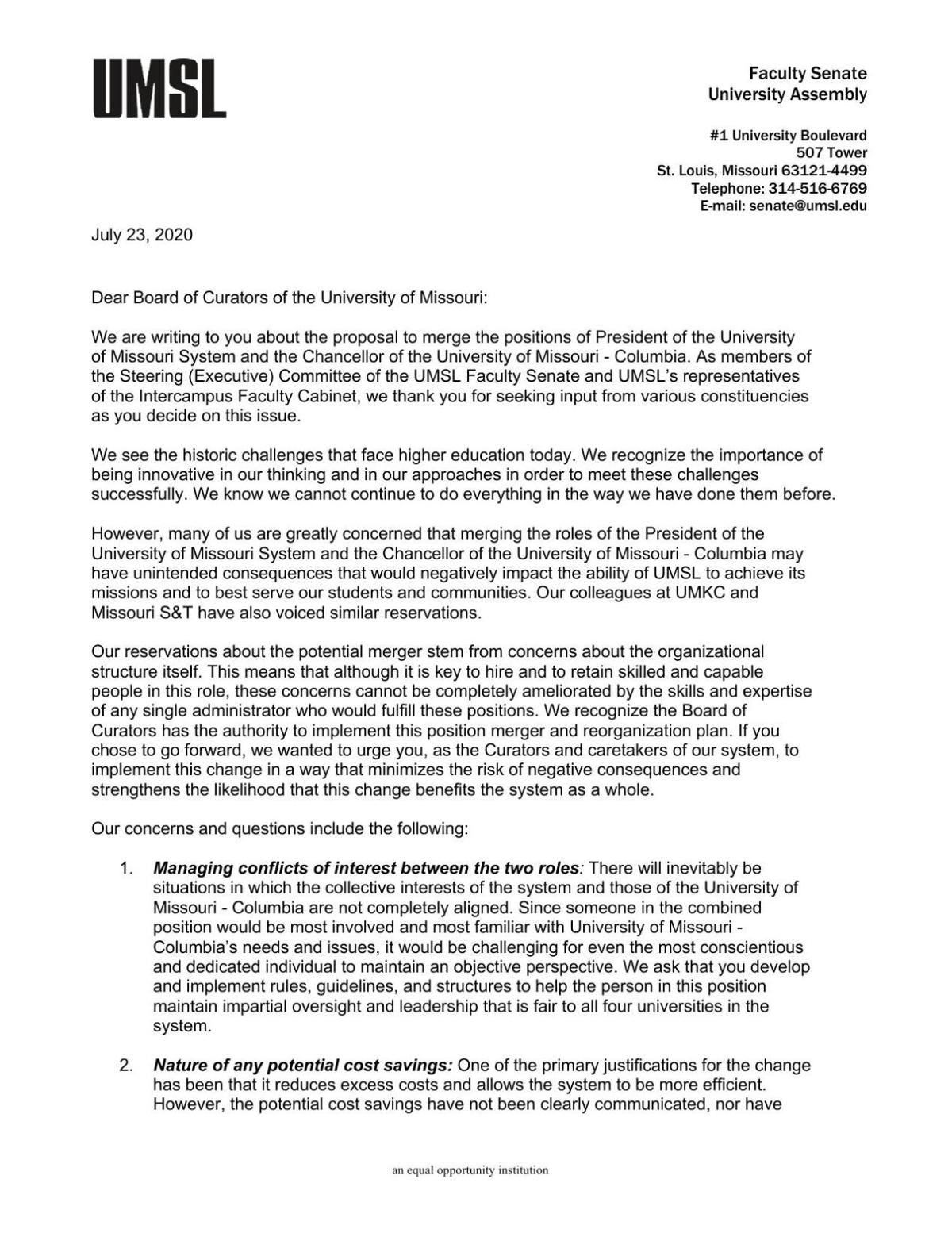 In a letter to the UM System Board of Curators on Thursday, the UMSL Faculty Senate and University Assembly said “many of us are greatly concerned” that the merger would lead to “unintended consequences that would negatively impact the ability of UMSL to achieve its missions.”

“Our reservations about the potential merger stem from concerns about the organizational structure itself,” the letter said. “This means that although it is key to hire and to retain skilled and capable people in this role, these concerns cannot be completely ameliorated by the skills and expertise of any single administrator who would fulfill these positions.”

The UMSL faculty are concerned about the four-campus system moving to “a flagship and satellite model that would further centralize the focus of higher education in the state on University of Missouri-Columbia.”

The faculty ask for controls, such as a panel of chancellors to evaluate major decisions, if the Board of Curators does opt to merge the positions.

The faculty also worried about conflicts of interest.

“There will inevitably be situations in which the collective interests of the system and those of the University of Missouri-Columbia are not completely aligned,” the letter said. “Since someone in the combined position would be most involved and most familiar with University of Missouri-Columbia’s needs and issues, it would be challenging for even the most conscientious and dedicated individual to maintain an objective perspective.”

Christian Basi, spokesman for the UM System, said Friday that the Board of Curators had not yet responded to the UMSL faculty, but in letters to faculty at Missouri S&T and UMKC, the board asked faculty to keep an open mind about changes.

“Many assumptions have been made that potential conflicts of interest will not be addressed, that universities will be reduced to branch offices, and that programs will diminish and suffer in the national rankings,” Julia G. Brncic, chair of the board, and Michael A. Williams, board member, wrote to S&T faculty.

“These assumptions are open to question and we believe there are ways to address these and other concerns,” they said. “As we keep open minds, we ask that you do the same. Through the entire process, we will work to understand these and other varied concerns.”

Kirkwood is the sixth school district in St. Louis County to move to an all-virtual start to the 2020-2021 year.

School reopening plans across St. Louis area vary from all in-person to all online

A few districts are still deciding, based on case numbers of the coronavirus.

Some parents are upset about the Springfield,  Ill., School District dress code saying students may not wear pajamas while taking classes online.

"Kids are second, pocketbooks are first."

Students reported symptoms after graduation on July 8 and prom on July 10.

Most districts in the St. Louis region are offering a mix of in-person and virtual options when school starts next month