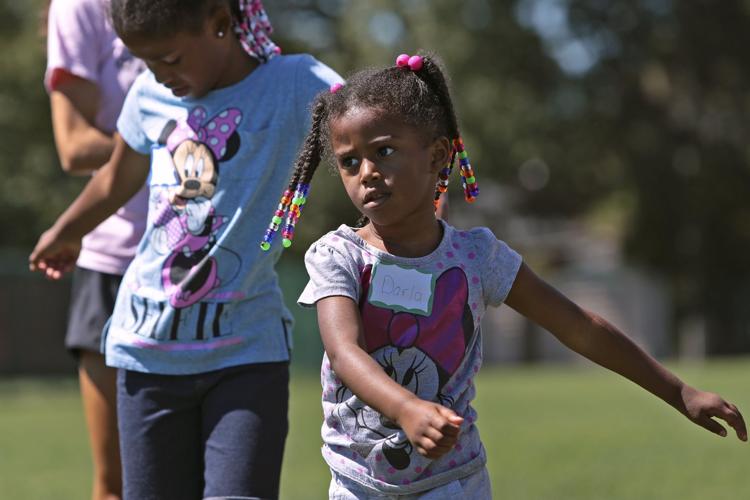 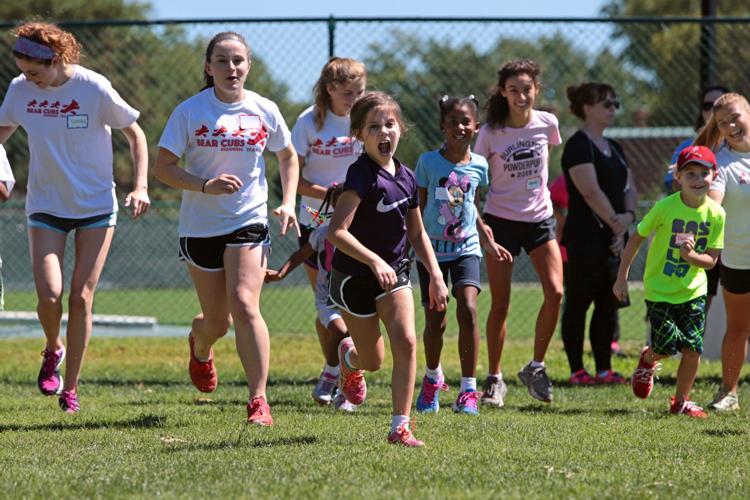 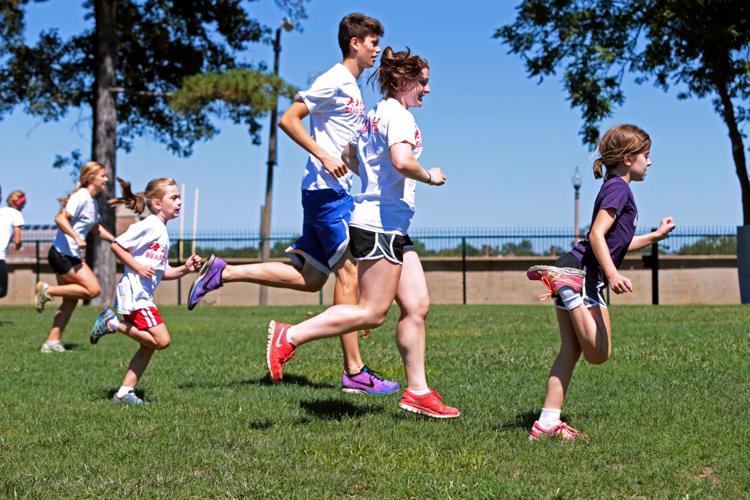 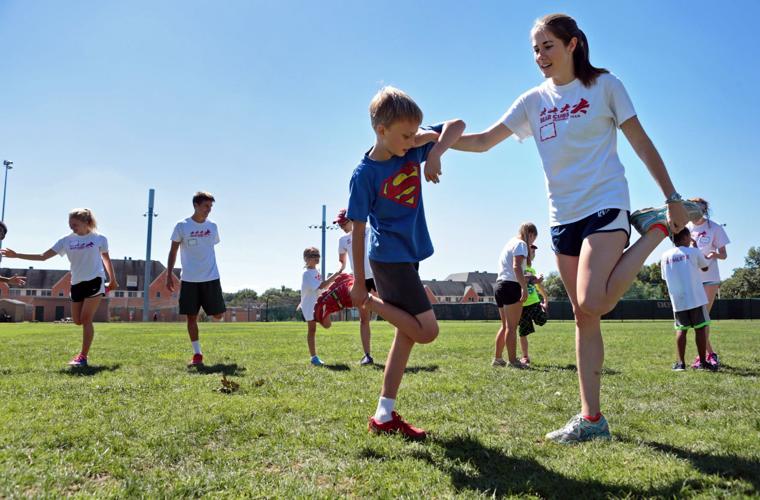 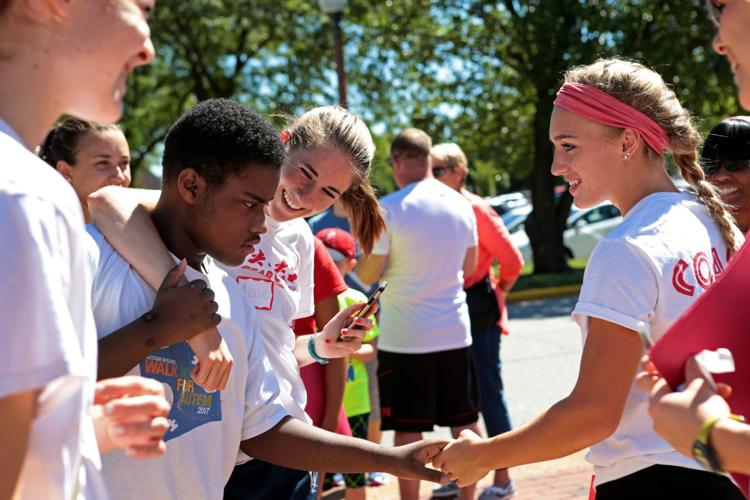 Annie Marggraff, director of Washington University's Bear Cub Running Team, puts her arm around participant, Marlon Brown, 16, while Rebecca Ridderhoff, a coach with the team, holds his hand at the start of practice on Sunday, Sept. 11, 2016. The no-cost program supported by United Way lets children with autism participate in sports. Photo by Cristina M. Fletes, cfletes@post-dispatch.com

ST. LOUIS • Just outside of the Washington University track on Sundays, the Bear Cub Running Team schedule is posted.

Stretch, run a lap. Play some games, run another lap.

Almost two dozen coaches and as many athletes meet on Sunday afternoons. The athletes are children as young as 8 who are somewhere, anywhere, on the autism spectrum.

The coaches are Washington University student athletes, predominantly from the track and cross-country teams but also from baseball, tennis and soccer.

The running team is a year old. The third season — practices are during the fall and spring — kicked off Sunday.

Children and their coaches played duck, duck, goose and red light, green light in between laps around the intramural field on campus.

Most students are able to make the lap. A few are lower-functioning, so the coaches help guide them through it and make sure that they’re having fun. That’s priority No. 1, with physical activity being a close second.

Bill and Joann Abell of Wildwood love the program. It’s a place where their son Drake, 8, can flourish.

“Most of these kids are at school with neurotypical children and they’re the outcast and nobody wants to be their friends — obviously that’s a little bit of an exaggeration, but my point is that here, there’s no judgment. Everybody here is alike,” Bill Abell said.

The program has made Drake more confident, Joann Abell said. He used to worry about being the slowest in his gym class at school. Now, he’s the only one who can say he has run in a 5K race.

The program is as simple as it sounds.

Athletes get one-on-one coaching — unless they require the help of more than one coach — while learning to become better runners.

Annie Marggraff, Washington University senior and cross-country runner, administers the program along with a few students she’s hoping will carry it on after she graduates.

Marggraff based the program on something she did in high school in California after realizing that her friend’s sister, who was autistic, wasn’t able to participate in team sports like her older sibling. Organized sports can often be overwhelming and overstimulating, she said.

Bringing the program to Washington University was pretty easy. She connected with the right people through the university’s networking to get the word out about the idea, and crossed her fingers that she would get a good response from families who were interested in participating. About 30 students signed up for last fall’s running season.

The team expanded into two practices each week starting this fall with double the athletes signed up.

“This is such a simple task for us coaches, and the parents are so amazed by the fact that we want to take an hour to do this,” Marggraff said. “You create such a deep sense of doing something that’s important, more than a short-term community service project.”

In the last year, Marggraff raised about $3,000 for the Bear Cub team, named after Washington University’s mascot.

The program doesn’t cost the parents. Really, there is no cost for the program. But Marggraff saw the opportunity to raise money to buy the athletes and coaches team shirts, and a chance to pay race entry fees for athletes who want to enter a race at the end of the season.

Among the funding the group secured was a $1,000 grant from the United Way’s Student United Way program.

The United Way program is open to individual colleges, students or groups. The board that decides which projects get funded is made up of college students, too, according to Mary Pryse, volunteer center manager with United Way of Greater St. Louis.

The program started in 2009, and the group has funded 60 projects, a little less than half of the submitted proposals. The total amount of grants doled out to college students and groups amounts to more than $40,000, Pryse said.

Marggraff said the program was going so well that she and other athletes were reaching out to schools in Washington University’s conference, the University Athletic Association, about expanding.

Parents such as the Abells hope that’s the case.

“We would travel anywhere for him to be able to do this,” Joann Abell said.

Bill Abell agreed, adding: “Look at the kids here. They’re all smiling and having a good time. There are some that are having some issues getting acclimated, but they’ll participate eventually. This is something these kids wouldn’t be able to do without these students.”

Almost all of the athletes are children with autism, but if a neurotypical sibling or friend wants to sign up, too, that’s encouraged. The more support the better.

Two of Zina Keeler’s children participate, including Natalie, 9, who is autistic.

Keeler jokes that it’s impossible to get her children out to exercise on a typical day, but when it comes to Sunday practices, they can’t get out to the field fast enough.

Natalie adores her coach. So much so that when her coach’s track team competes, the Keeler family comes out to support them the way the college athletes support the children on the weekend.

“These kids have a really tough life, so any support, any experience, is a good one for them,” Keeler said.

Measures would pay for repairs and renovations in both districts.

A significant number of school districts are expected to see declines when performance scores are released in December.

Annie Marggraff, director of Washington University's Bear Cub Running Team, puts her arm around participant, Marlon Brown, 16, while Rebecca Ridderhoff, a coach with the team, holds his hand at the start of practice on Sunday, Sept. 11, 2016. The no-cost program supported by United Way lets children with autism participate in sports. Photo by Cristina M. Fletes, cfletes@post-dispatch.com