Whatever the outcome, Clayton tuition lawsuit has hefty tab
0 comments
Share this
{{featured_button_text}}
1 of 2 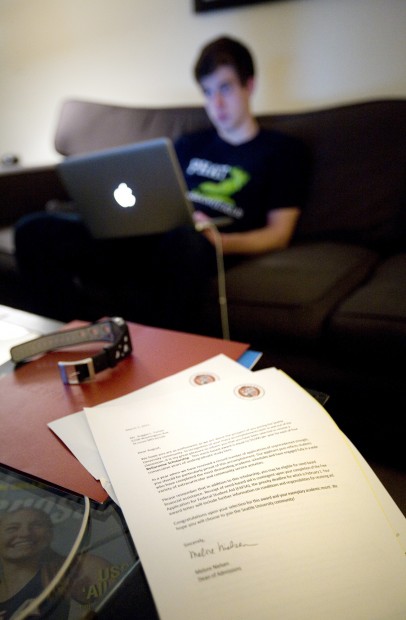 MARCH 10, 2011 - Auggie Turner, 17, a senior at Clayton High School, uses his computer Thursday at his home in St. Louis. In the foreground are letters from Seattle University announcing an academic scholarship granted to him worth $36,000 over four years. His mother, Dr. Jane Turner's, lawsuit against the Clayton School District and its refusal to send her son Auggie's tuition bills to St. Louis Public Schools has unleashed a furor across the state. (Jerry Naunheim Jr.) 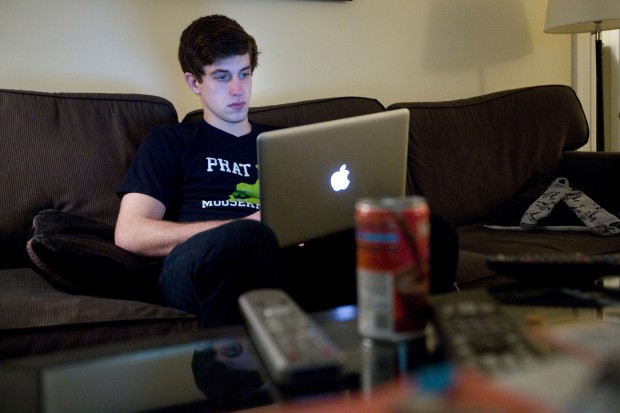 THURSDAY, MARCH 10, 2011 - Auggie Turner, 17, a senior at Clayton High School, uses his computer at his home in St. Louis. The Missouri Supreme Court ruled last summer that a 1993 law allows students in unaccredited districts to transfer to districts in the same county or neighboring counties, with the home district paying the tab for tuition and transportation. Auggie's mother, Jane Turner, and several other St. Louis city parents filed suit to enforce the transfer law. (Jerry Naunheim Jr.)
BY ELISA CROUCH • > 314-340-8119

Her lawsuit had become much more than a dispute over whether her sons should be able to attend Clayton schools at the expense of the St. Louis school system.

It had unleashed a furor.

When the state's highest court took her side in July, it became a landmark case that could throw open the doors of better schools to thousands of students in unaccredited districts.

Turner and three other parents in the lawsuit celebrated when the state Supreme Court announced their interpretation of the law was correct: When students want to transfer from failing schools in Missouri, they have a right to do so. And the failing school system should pick up the tab.

But the victory wasn't complete. The Supreme Court sent the matter back to a lower court, setting the stage for yet another legal fight.

Now lawyers from nearly every school district in the area have lined up to fight Turner's efforts. The attorney general, the state education department and the state school board association joined the districts, saying the ruling could overcrowd suburban classrooms and bankrupt St. Louis Public Schools.

More recently, state lawmakers are debating legislation to invalidate the outcome if she wins.

Turner, a forensic pathologist, finds herself in a position she didn't expect. She cannot be reimbursed for the $60,000 in tuition she paid Clayton schools after the city schools system lost accreditation, the courts have ruled. Her younger son, August, will graduate from Clayton High School this year. One of the four parents has dropped from the case, and another says he'd like to.

Though Turner has supporters, her case has yet to shake free a benefactor to underwrite her cause. And socially, there have been a few slights: a pointed comment to her at a party, a remark made to her son.

Turner hasn't determined if she wants to press on after her son finishes high school.

In Jefferson City, Turner's fight has provided fodder for the bigger issues of school choice, open enrollment and making drastic changes to St. Louis Public Schools. Legislators searching for ways to prevent the uncontrolled transfer of thousands of city children to suburban schools are working on what they call a "Turner fix."

Their proposals range from exempting the city schools system from having to pay tuition bills if Turner wins, to allowing the education department to dictate when school districts may turn away transfer students. At an invitation-only meeting last week, several lawmakers asked about two dozen education representatives from across the state about which solutions they would support. Among the ideas: giving suburban districts authority to open and operate schools in the city.

The ramifications of the Turner case reach beyond the metro area to other parts of the state, where rural schools, too, are struggling.

"It has huge implications," said Sen. David Pearce, R-Warrensburg, chairman of the Senate Education Committee. "It's not an issue that's just a local issue."

NOT A NEW CONCEPT

The saga started in 2007 when Turner and other St. Louis parents wrote the superintendents of Clayton and St. Louis schools. The city schools had just lost their accreditation — the state's stamp of approval.

The parents already had children in Clayton schools. In fact, Turner's sons had been attending for years. Now, the parents wanted their tuition bills to be sent to the St. Louis district.

This wasn't a novel concept. Since 2003, the Clayton district had been billing the now-defunct Wellston School District for the tuition of 13 Wellston children.

Turner and the St. Louis parents wanted the same treatment. They pointed to a state statute that says children in failing districts may attend better schools in an adjoining county at the expense of their home district.

It was a law that parents in the Wyaconda School District, near the Iowa border, took advantage of in 2006 when their schools lost accreditation. Missouri's Department of Elementary and Secondary Education directed Wyaconda to pay tuition for students who transferred out. And the better schools nearby had no choice but to take them.

"We felt the law was real simple and clean," said Bill Drendel, a parent who joined Turner in the lawsuit. "You didn't have to be an attorney to read this sentence and know what your rights are."

However, memos from the state education department said St. Louis County school districts didn't have to accept children from St. Louis. And if they did, they didn't have to bill St. Louis Public Schools.

Turner's sons have never attended St. Louis schools. After Turner married her second husband, she moved from Clayton to the Central West End, because her husband's job requires that he live in the city. Turner kept her boys in Clayton and paid tuition.

Clayton schools are a good fit for her family, she said. Turner wanted to be able to go to work and not worry about her children at school, she said.

"I didn't consider the city public schools an option," she said.

Three other parents felt the same.

The city elementary schools were too chaotic, said Drendel, a computer programmer who lives near Lindenwood Park. He and his wife enrolled their daughter, Anna, in Clayton schools in 2007, after she'd attended a private school.

The plaintiffs also included Susan Bruker, who later dropped from the suit, and Gina Breitenfeld, who declined an interview.

The attention the case is receiving in the Legislature surprises Turner, she said.

The outcome of Turner v. School District of Clayton could affect 72,000 children living within the boundaries of St. Louis Public Schools and the unaccredited Riverview Gardens district, according to the Cooperating School Districts of Greater St. Louis. That figure includes 28,000 students who attend private or parochial schools but could transfer to public schools in neighboring counties under the court ruling.

Given those numbers, it would be impossible for school districts to comply with state statute and accept any of these students who wished to transfer, Supreme Court Judge Patricia Breckenridge wrote in her dissenting opinion to the July ruling in favor of Turner.

"Such an increase would require the Clayton School District, virtually overnight, to acquire new classroom buildings and hire numerous additional faculty members to meet the increased demands on the district. Such a result is absurd," Breckenridge wrote.

In 2006, the state department of education took steps to stop the escalating costs that student transfers were having on the Wellston district. The tuition bills were about $1 million a year, and Wellston wasn't paying.

A year later, when St. Louis schools lost accreditation, Clayton school officials still were owed previous years' tuition from Wellston. They had no intention of starting a similar transfer program with St. Louis.

So, Clayton schools continued to bill city parents — not the city system — for their children's tuition. Memos from the education department said the district had the right to do so.

"As far as we were concerned, we were relying on advice and guidance from the state board of education," said Chris Tennill, spokesman for Clayton schools.

Clayton schools have about 70 tuition-paying students from outside the district. About two dozen are from St. Louis, Tennill said. Annual tuition is $10,280 for kindergarten through fifth grade, and $15,450 for grades 6 through 12.

Drendel wants to drop from the case, he said. His legal bills are mounting. Four years of litigation are taking their toll.

"Beyond our personal disappointment for our situation, there's an enormous sense of injustice for all the kids that are trapped in the city unaccredited school district," Drendel said. "By the time its reaccredited, these kids would have spent well over half their school life in an unaccredited or provisionally accredited school system. And they have no way out."

Though Drendel wants to quit, he can't.

In the fall, the Clayton district filed a counterclaim against them for this year's tuition. The courts had suspended their tuition until the case is resolved.

This was an intentional move by the district to keep the plaintiffs in place, Tennill said. If plaintiffs decide to drop out for whatever reason, the issue of whether schools may refuse transfers from unaccredited districts is unresolved. And it needs clarification, he said.

Ladue students to demonstrate in support of laid-off teachers Monday

Koster's defense of school transfers is twist in Turner case

Last year, he contended the Legislature never intended for students in unaccredited districts to be able to transfer to any school they chose.

Larger case over transfers from failing schools is still in limbo.

Schoolchildren are not bargaining chips.

The only thing both sides agree on in a dispute over tuition, students and failing school districts, is they all need more clarity.

Jane Turner should remind us of Brown

This summer, many St. Louis school leaders received a startling and, to their minds, an unappetizing surprise from the Missouri Supreme Court.

32 spellers head to final round of bee

Final round of the St. Louis Post-Dispatch Spelling Bee set for March 19.

MARCH 10, 2011 - Auggie Turner, 17, a senior at Clayton High School, uses his computer Thursday at his home in St. Louis. In the foreground are letters from Seattle University announcing an academic scholarship granted to him worth $36,000 over four years. His mother, Dr. Jane Turner's, lawsuit against the Clayton School District and its refusal to send her son Auggie's tuition bills to St. Louis Public Schools has unleashed a furor across the state. (Jerry Naunheim Jr.)

THURSDAY, MARCH 10, 2011 - Auggie Turner, 17, a senior at Clayton High School, uses his computer at his home in St. Louis. The Missouri Supreme Court ruled last summer that a 1993 law allows students in unaccredited districts to transfer to districts in the same county or neighboring counties, with the home district paying the tab for tuition and transportation. Auggie's mother, Jane Turner, and several other St. Louis city parents filed suit to enforce the transfer law. (Jerry Naunheim Jr.)
© Copyright 2021 STLtoday.com, 901 N. 10th St. St. Louis, MO | Terms of Use | Privacy Policy
Powered by BLOX Content Management System from TownNews.com.
You don't have any notifications.