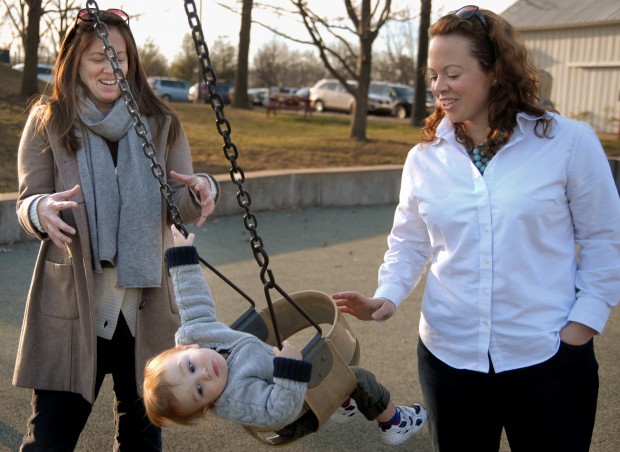 Leah Zueger (left), her 14-month-old son August Eversman and Sarah VanSlette visit during a play date at Longview Farm Park in Town and Country on Wednesday, Feb. 1, 2011. Zueger is originally from South Dakota but now lives in St. Louis. VanSlette is researching the St. Louis question: "Where'd you go to high school?" Photo by Sid Hastings 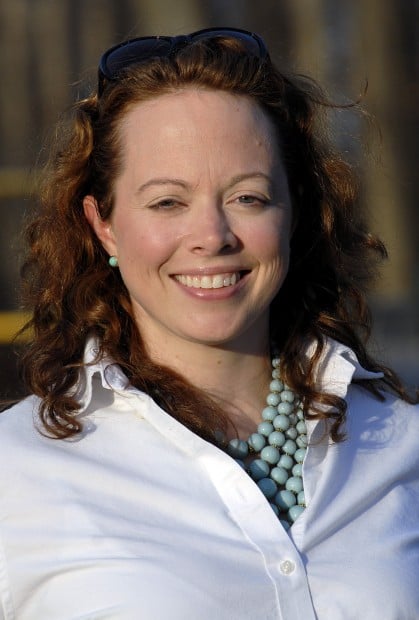 Sarah VanSlette is a communications professor at SIU-Edwardsville who is researching how the famous St. Louis question of "Where'd you go to high school?" impacts the metropolitan area and the view of those who have relocated here. Photo by Sid Hastings

It was while attending a party as newcomers to St. Louis that, for the first time, someone asked Kim Wolterman and her husband where they went to school.

"He said, 'No, I meant high school.' And I'm thinking, 'Why do you care where I went to high school?'" Wolterman said.

She didn't know it then, but Wolterman was bumping into one of St. Louis' most peculiar quirks — asking complete strangers to name their high school alma mater.

For Wolterman, the question was off-putting.

"It seemed like if you weren't born and raised here, people were not that welcoming," she said.

The perceived snub was not enough to drive Wolterman, now 56, and her husband to move away, but it's stories like those that got Sarah VanSlette, a professor of public relations, thinking: Is the St. Louis question giving the region a bad reputation?

VanSlette, who teaches at Southern Illinois University Edwardsville, is seeking to answer that question as she begins broader research on the experiences of transplants to St. Louis. Her work is funded by a grant from the Institute for Urban Research.

As a native of St. Louis (she went to St. Joseph's Academy) who moved away for several years but returned in 2010, VanSlette says she understands both sides. St. Louisans see the question as a way to find similarities and make connections; newcomers might question the motive and wonder if those asking are closed-minded and cliquey.

"I'm so passionate about this city, and I really want people to love it as much I as do," said VanSlette, 32, who started a blog about St. Louis' virtues while living in Cleveland. "I'm interested in exploring ways to make people who are not from here more comfortable."

For years, retaining young professionals in the St. Louis area has been a problem, although U.S. Census data recently analyzed by the Brookings Institution showed that more young adults moved into the region than out from 2008 to 2010. But that's partly attributed to a poor economy. Many say there is still lots of progress to be made in keeping newcomers happy.

Anthony Bartlett is co-founder of St. Louis Transplants, an organization built around the concept of inviting newcomers to social events with the promise that "no one will ask you where you went to high school."

Some transplants find it offensive, a way for natives to quickly to dismiss someone based on their answer, said Bartlett (Ladue Horton Watkins).

"It has meaning, whether that's a good or a bad thing," he said. "Nobody has that kind of information — background, what religion they are — from one question."

"I think it's important to validate some of those feelings and instead of getting defensive, to listen," Bartlett said. "I really want to spread the message to transplants that it's not malicious in any way, it's just sort of what you say.

"We might have a few more barriers to entry, but I think that once you are there, St. Louisans are the most loyal friends you'll find."

The topic has hit a nerve. While some researchers struggle to find participants, VanSlette got dozens of responses within a few hours of soliciting her study on Twitter.

She plans to start with in-depth interviews of those who have moved to St. Louis and then develop an online survey.

With the results and potentially another grant, VanSlette would like to develop a plan that any corporation who has lost talent could appreciate — how to help newcomers make St. Louis home.

"We take pride in our high schools and value education, but we also should look to meeting new people because they can offer a lot to us," VanSlette said. "If we can improve their satisfaction with the city, it's good for everyone, and we all benefit."

Andrew Theising, director of the Institute for Urban Research at SIUE, said the research addresses a classic question about St. Louis, and that there is merit in looking at how your city treats people who are new. The goal of the institute is to pull together university experts to examine issues that affect life in urban and metropolitan areas.

"This a real issue. If we want to get beyond it, we have to understand it," said Theising (McCluer North).

VanSlette's follow-up research could involve looking at the dynamic in other cities, he said.

Patrick Brown, an assistant to Mayor Francis Slay (St. Mary's), works with the Vanguard Cabinet, a group that aims to keep young adults engaged and involved in the city.

Awareness on each side, both natives and newcomers, could be a good thing, said Brown (St. Mary's).

"It's an icebreaker. It may not be a problem," he said. "It's quirky. And quirky is not always bad."

Abby Bloxam, 29, heard about the question before she even moved to St. Louis.

Her real estate agent told her she was going to be asked all the time where she went to high school, so "come up with a good lie," Bloxam said. The agent told her schools that people would be impressed with.

Turns out, she didn't need it. No one has ever asked her.

She attributes it to moving to Kirkwood, where everybody seems to know each other.

"Because they didn't know who I was," she said, "they clearly knew I didn't grow up here."

Can you pair the school with its plaid?

CREDITS: Tartan research by David Hunn; quiz design by Josh Renaud, based on original by Brian Williamson
The quiz is loading

3. To whom was Mike referring when he said: "He's the biggest thing to hit Japan since they dropped the bomb on Nagashima!"
Wrong.Right. Hideo Nomo

At some schools, cursive writing takes back seat in digital age

Cursive is still taught at many districts in the St. Louis area, but in some places it is being eliminated.

So, how did 'the St. Louis question' start?

Ray Bosenbecker, author of "So, Where'd You Go to High School?", who researched the history of secondary schools in St. Louis for his book, ha…

Can you pair the St. Louis private school with its plaid?

It's time to test your knowledge of local schools (or former schools) and see if you can pair the school with its plaid.

In a bright sign for the economy, more young adults move here in the recession than moved away.

Your high school is irrelevant in global economy, survey says

How much do you know about the theme park? Test yourself on rides, history and more.

Some snicker at his convolutions of the language. We embrace them. Test your knowledge of these Shannonisms, based on broadcasting lore.

Where did you go to high school?

The organization St. Louis Transplants is hosting a conversation between non-natives and interested city insiders looking to promote growth in…

Leah Zueger (left), her 14-month-old son August Eversman and Sarah VanSlette visit during a play date at Longview Farm Park in Town and Country on Wednesday, Feb. 1, 2011. Zueger is originally from South Dakota but now lives in St. Louis. VanSlette is researching the St. Louis question: "Where'd you go to high school?" Photo by Sid Hastings

Sarah VanSlette is a communications professor at SIU-Edwardsville who is researching how the famous St. Louis question of "Where'd you go to high school?" impacts the metropolitan area and the view of those who have relocated here. Photo by Sid Hastings