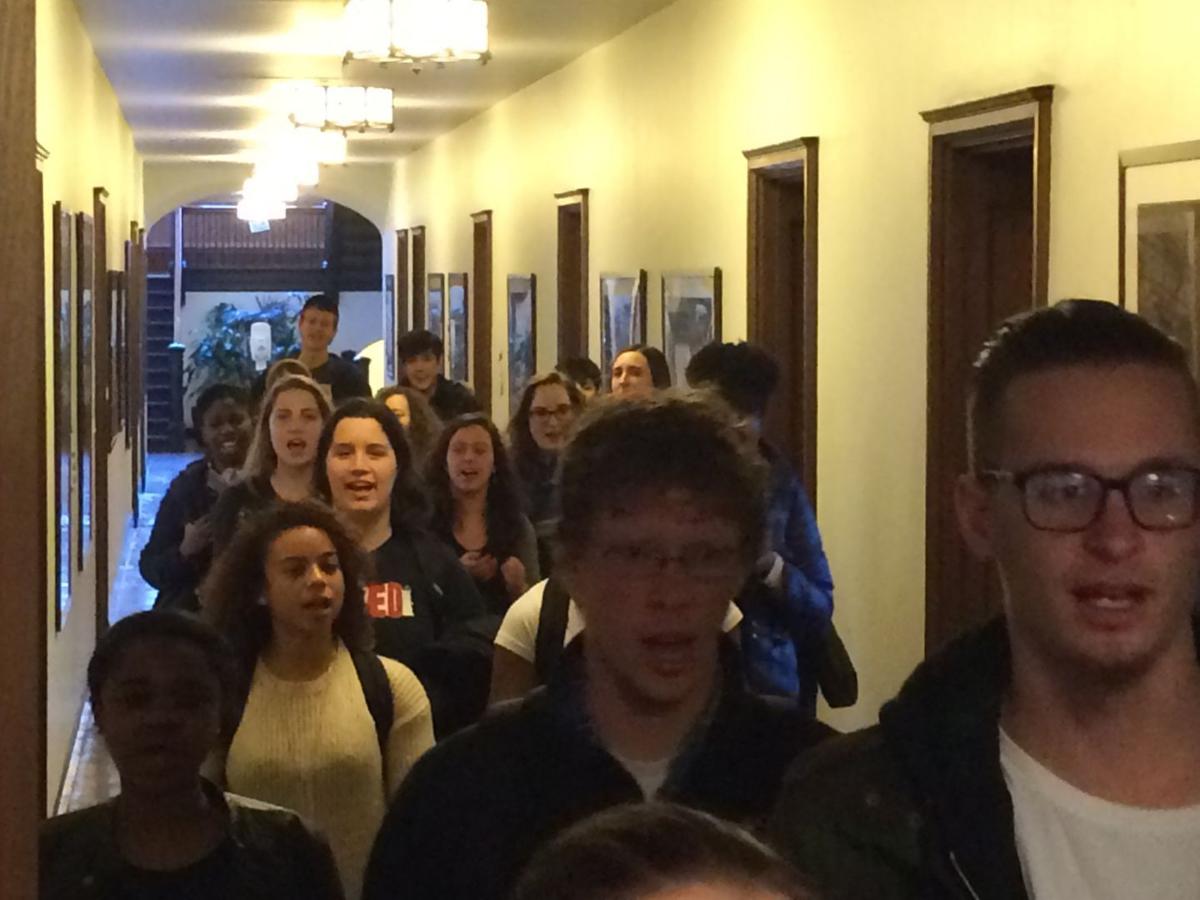 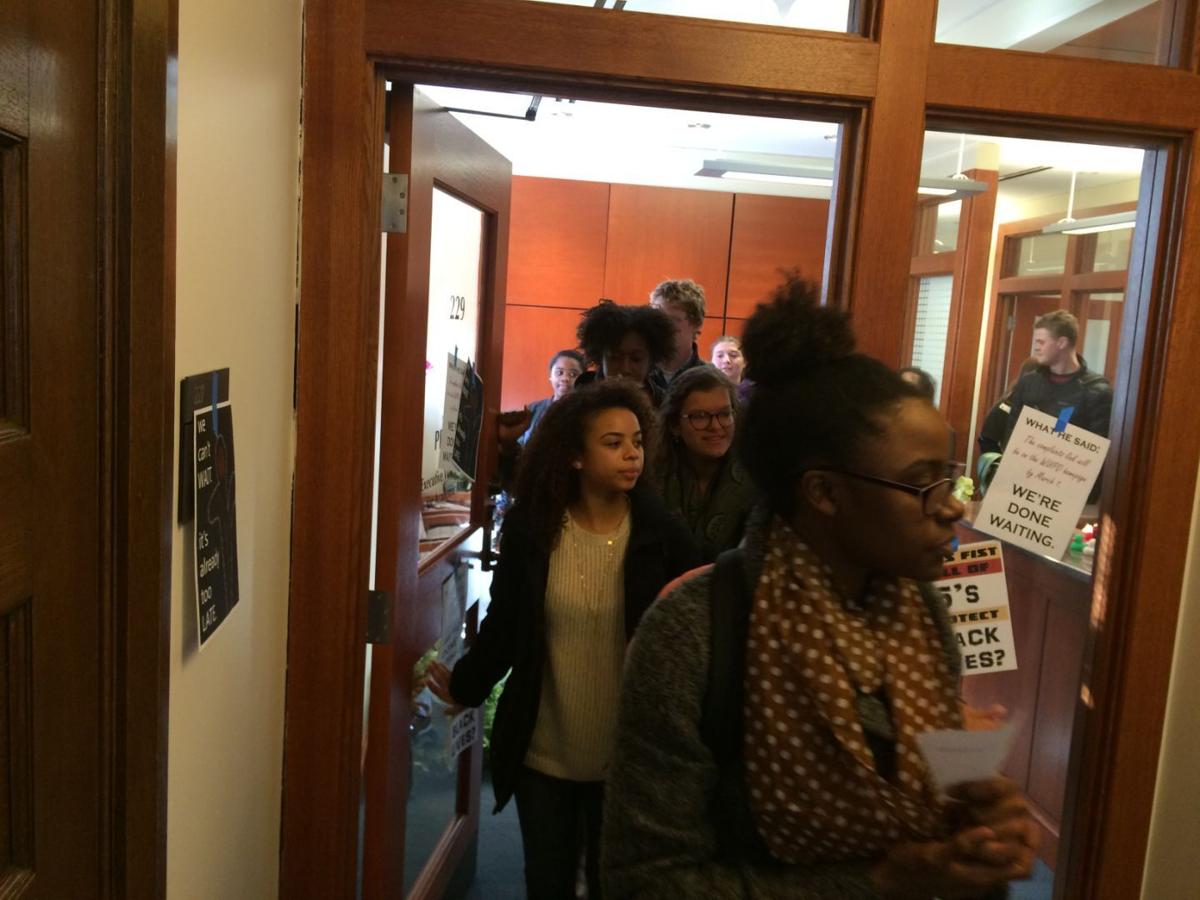 Washington University students walk out of an administrative office on Thursday, March 5, 2015 after leaving flyers for Provost Holden Thorp. The students were protesting unequal treatment of minority students on campus.

Washington University leaders have committed as much as $400,000 per year, and possibly millions more in future years, to meet demands made by student activists who’ve criticized the school for being out of touch with the larger problems of race and inequality in the St. Louis area.

But those concessions haven’t silenced critics, including a group of about 20 who rallied in opposition Thursday.

In an eight-page document delivered to students recently, university leadership acknowledged publicly for the second time in weeks that WU has a race problem on campus. They cited incidents of racial slurs being said out loud on campus, posted on social media and also the disproportionate questioning of black students by university police.

The document is the university’s official response to 16 demands presented to them by student activists calling themselves Washington University Students in Solidarity.

Among the demands the university agreed to are to give students a say in how the university invests money, creation of a course on diversity, more university-sponsored community service projects and a promise to pay for a third party to audit university police practices.

While many of the demands carry costs, one of the more expensive demands is a commitment to spend $100,000 a year over five years to fund the “For the Sake of All” research centered on poverty and health disparities.

“Part of our responsibilities as one of America’s great universities, is helping to address the persistent problems we have in this country,” said Holden Thorp, WU’s provost and executive vice chancellor for academic affairs.

A number of students involved in negotiations with administrators, however, came away unimpressed with the university’s response.

David Dwight, 21, a senior biomedical engineering major, said the university is content to “set up meetings and committees” rather than make real changes. “What we’re going to do is keep the pressure up,” he said.

Part of the concern is that although university leadership says they say they share the goal of increasing minority enrollment, they would not commit to increasing the percentage of black and Latino students to 10 percent each, up from 6.6 percent and 5 percent respectively (A U.S. Supreme Court decision prohibits them from setting specific targets).

The university also did not agree to a demand to create a three-credit course on “the social, political, economic and historical landscape of St. Louis,” and requiring all students to take the class.

University leaders said creating the class would undermine the role of faculty in setting the curriculum.

Jacqui Germain, 24, a senior African-American studies major, said the university is trying to avoid long-term structural changes in favor of quick fixes. “We’ve seen before that when the university wants to do something, they get it done,” she said.

Another area of disagreement involves students’ demand to have a voice in how the university develops property it owns, including land in Forest Park Southeast. Students demanded that at least 50 percent of any new development is dedicated to affordable housing.

In an initial meeting with students, the university leaders said they would consider the demand. Several days later, BJC HealthCare and the Washington University School of Medicine announced plans to build a 12- to 14-floor office building in the area, with preliminary plans calling for up to 20 percent of nearby land to be designated for affordable housing.

“They are putting the success of the medical center before the needs of the local community,” said Josh Potash, 21, a senior majoring in political science major

“These are folks who are going to be here for a short time. They want to see what they are pushing for happen while they are here. In some cases that’s possible, in some cases it’s not possible,” Thorp said.

The university expects to have a more diverse student body when classes start in the fall.

St. Louis Students in Solidarity further called on the university to cut ties with prison investments.

University leaders are set to meet with students to discuss demands for change.

Washington University students walk out of an administrative office on Thursday, March 5, 2015 after leaving flyers for Provost Holden Thorp. The students were protesting unequal treatment of minority students on campus.