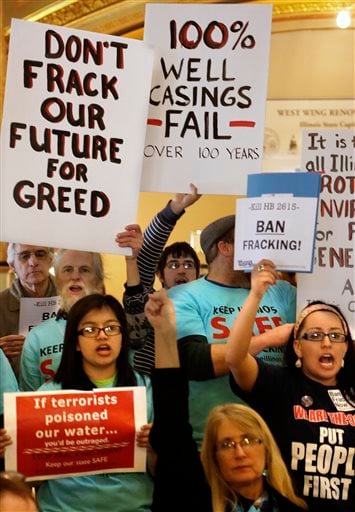 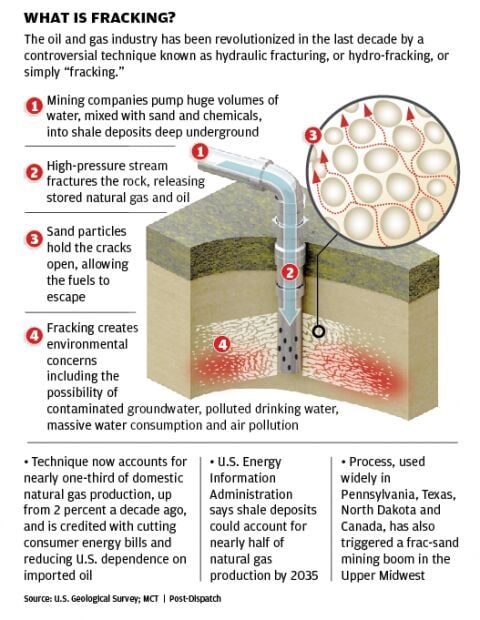 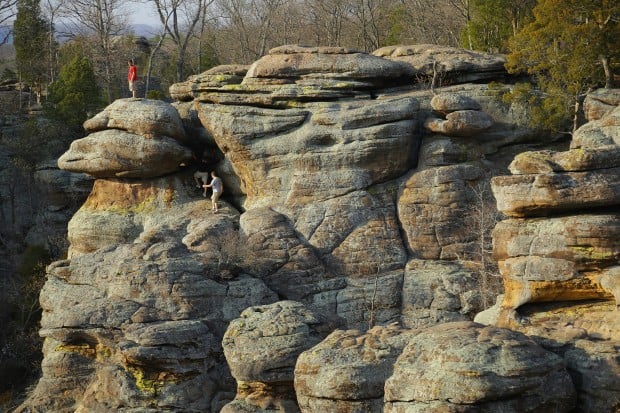 Outdoor enthusiasts, tourists, climbers and backpackers are drawn to Garden of the Gods Wilderness Area near Herod, Ill., shown in this April 9, 2013, photo. Southern Illinoisans have hopes and fears surrounding the high-volume oil and gas drilling that may be starting in the Shawnee National Forest. (AP Photo/Seth Perlman)

The rocky ground deep beneath Southern Illinois will soon be wrung like a sponge to yield previously unreachable oil and natural gas. “Fracking,” the process of fracturing underground rock formations to extract their hidden fuel, is coming to the Land of Lincoln.

The politics behind it, like the science, is all about pressure: Economic pressure, in the form of thousands of jobs for the state’s most economically desolate region. Environmental pressure, with “green” groups torn between wanting to stop it and wanting to regulate it if it can’t be stopped.

And pressure on a beleaguered governor who badly needs a win.

“This new law will unlock the potential for thousands of jobs in Southern Illinois and ensure that our environment is protected,” Quinn said Monday, in a statement accompanying his signature on a new law designed to usher in an Illinois fracking industry.

“[H]ydraulic fracturing is coming to Illinois with the strongest environmental regulations in the nation,” he said in the statement. “It’s about jobs and it’s about ensuring that our natural resources are protected for future generations.”

Others say that balancing act is too dangerous.

“We’re not saying that fracking can’t ever be done safely. But currently, there are no processes that are safe,” asserted Annette McMichael, communications director for Southern Illinoisans Against Fracturing our Environment. “We’re really ruining the future of our children to move into this area.”

“Fracking” is shorthand for “hydraulic fracturing.” It’s the technique of pumping water, sand and chemicals under high pressure into shale veins as far as 10,000 feet down, creating fractures in the rock to allow the oil and natural gas to seep to the well. The process gets at hidden reserves conventional drilling can’t touch.

Fracking has been around for more than half a century, but it is a newer variation — horizontal hydraulic fracturing — that has revolutionized the oil industry and jump-started the political debate. It’s a process of fracking in which the well, after penetrating the layer of shale from above, is turned sideways. Since shale occurs in horizontal layers, this allows a single well to follow the path of the shale, breaking and extracting far more from it than a vertical well would.

The environmental concerns largely center on the chemical-laden water used in the process. After it breaks up the shale, the liquid is pulled back up out of the ground. It can be treated or disposed of in several ways, but critics say any process that creates millions of gallons of toxic wastewater is creating trouble.

“They’re using massive amounts of water, and that water can never be returned to the water table. You can’t clean that,” said McMichael, of the anti-fracking group SAFE.

Critics also note other issues, including air pollution from natural methane released in the process.

SAFE was, and is, pushing for a freeze on fracking until those problems are addressed. But the politics and policy issues surrounding the debate caused a different kind of fracturing, between environmentalists.

As SAFE held out for a moratorium in the Legislature this spring, the Illinois Environmental Council worked with the industry and its proponents to get a fracking-regulation bill passed, out of fear that the moratorium attempt was a dry well.

“If we didn’t pass any regulations this year, and the moratorium didn’t have the votes, we were going to be in a perilous situation” in which fracking was legal and unregulated, said Jen Walling, executive director of the council. “Something had to happen, and had to happen quickly.”

The legislation was strongly supported in Springfield, despite the lingering environmental concerns, because of the economic potential in the part of the state that needs it most.

Illinois has a long history of boom-to-bust energy industries, and it has been in the bust phase for years now, contributing to an unemployment rate as high 13 percent in some counties.

The region’s once-mighty coal industry was crippled in recent decades by environmental regulations on its high-sulfur product. Illinois’ oil industry, once among the nation’s largest, peaked in 1940 at 147 million barrels; today, the state’s annual output is around a modest 10 million barrels.

It isn’t that the region has run out of oil. By some estimates, there are still more than 4 billion barrels of it down there. But the big drillers have moved on to reserves that are easier to get to. The possibility of drawing those drillers back to Illinois — particularly to the southeast portion of the state — is a key promise of fracking.

“If the industry finds the reserves we think might be there, we’re looking at potentially up to 45,000 jobs over five years,” said Tom Wolf of the Illinois Chamber of Commerce, which commissioned a study on the potential economic impact of fracking for Southern Illinois. “It would be a huge boost for that area.”

Out-of-state drilling interests have already flooded into the region, reportedly buying up more than $100 million worth of leases from landowners so far to allow them to explore. Paying wells would mean additional money for those owners in royalties.

“We’re already hearing from court officers that they’ve gotten $200,000, $400,000 in copying fees” for lease transactions, Wolf said. “And this isn’t something that’s going to leave in a year. If it works out, the industry is going to be here for decades.”

The fracking itself probably won’t start until next year, after state regulators flesh out the new law with specific regulations.

The legislation that Quinn signed Monday, creating the state’s first regulatory framework for hydraulic fracking, will give the state’s Department of Natural Resources the task of overseeing the practice. Companies will have to publicly disclose the chemicals they use in the process. There will be stringent regulations on wastewater disposal.

Quinn — who wants to run for re-election next year but is mired in low approval ratings — was stung at the end of the legislative session last month by the collapse of legislation he backed on same-sex marriage, gun control and pension reform.

Fracking, despite the controversy, turned out to be one of the few victories he could point to.

“This law is an example of what we can achieve when legislators and leaders in both chambers work together in good faith to get something done for the greater good of the people of Illinois,” he said in his statement.

Fracking: a new way to drill

How a new approach can get to previously unreachable natural resources

Outdoor enthusiasts, tourists, climbers and backpackers are drawn to Garden of the Gods Wilderness Area near Herod, Ill., shown in this April 9, 2013, photo. Southern Illinoisans have hopes and fears surrounding the high-volume oil and gas drilling that may be starting in the Shawnee National Forest. (AP Photo/Seth Perlman)