JEFFERSON CITY — A frenzy awaits Missouri legislators returning to the Capitol on Monday for their final week of regular action in 2022.

Lawmakers finished the state’s $49 billion budget on Friday, clearing the way for debate on unresolved issues such as congressional redistricting and voter ID requirements in the last week.

The Legislature is required to adjourn by 6 p.m. this Friday. Here are five legislative issues to track as the session comes to a close:

The House will send the plan to the Senate on Monday, said Rep. Dan Shaul, R-Imperial, chair of the House Redistricting Committee.

On Friday, Onder signaled a breakthrough on the second House plan was possible. He said he’d rather keep map-making responsibilities out of the courts.

“It’s not as strong as it should be,” Onder said of the new House plan, adding it “definitely makes a bigger split in St. Charles County ... than I’d like.

“But it shows, finally, people are willing to move and negotiate,” he said. “It’s good we’re moving in a better direction.”

The Senate approved its own map in March, after negotiations with the St. Charles senators, landing on a map that placed 80% of county residents in the 3rd.

“Everybody has to give a little bit at this point,” Shaul said.

“I think it’s going to come down to whether the St. Charles guys are willing to — to do what a lot of us have also done, which is to compromise a little bit,” Rowden said. 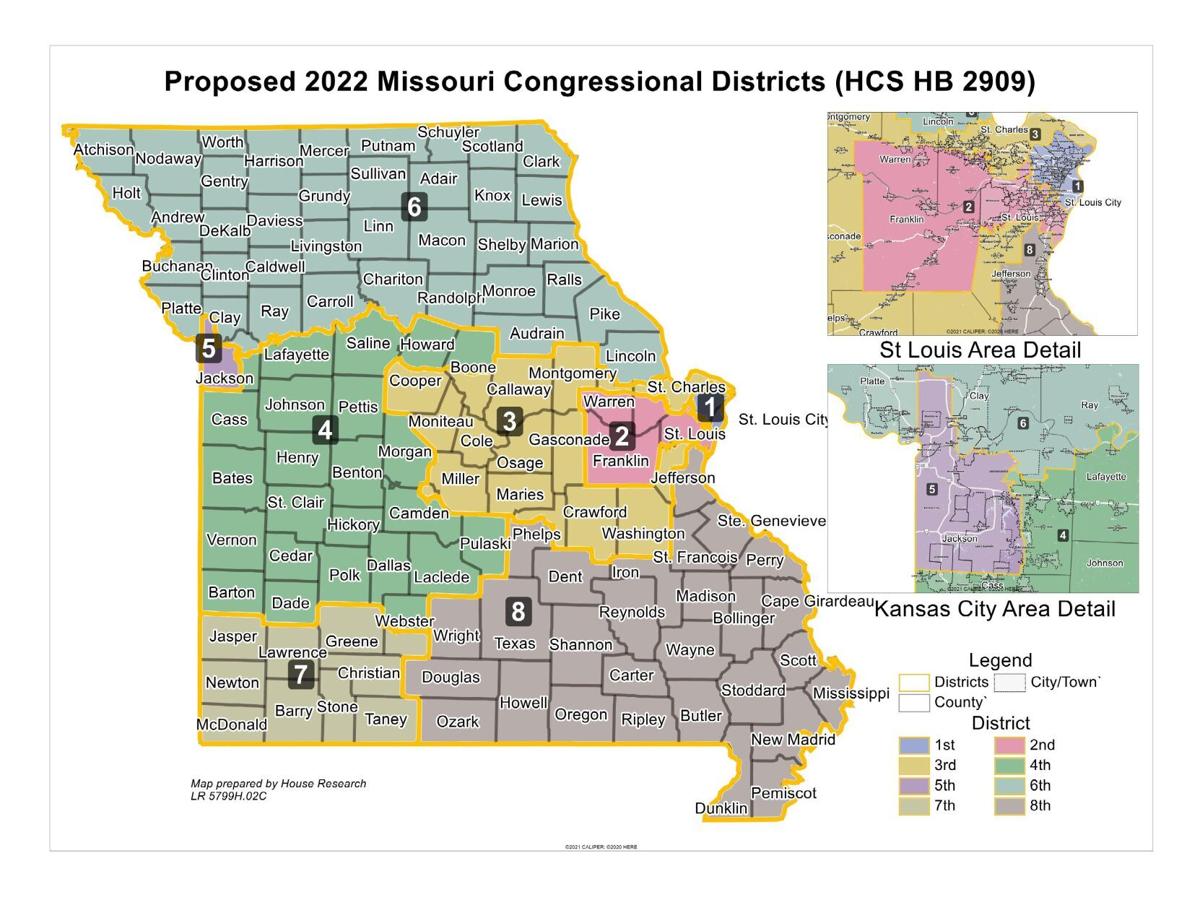 Numerous education topics are attached to Senate Bill 681, which still requires final votes in both chambers.

The legislation originally directed the Department of Elementary and Secondary Education to address literacy problems by developing a “comprehensive system of services for reading instruction.”

Lawmakers added legislation requiring school districts to initiate a gifted student program by 2024 if at least 3% of students are determined to be gifted.

A separate piece allows the state to create four “recovery schools” for “eligible students diagnosed with a substance use disorder,” according to the bill summary.

Also included in the latest version of the bill is the so-called "Get the Lead Out of School Drinking Water Act."

The education bill allows individuals employed by districts in response to staffing shortages to obtain teaching certifications. And it allows retired teachers to hold full-time jobs with schools for four years without losing their retirement benefits.

The legislation would also incentivize districts to save on administrative costs. Districts that share superintendents would be able to draw down $30,000 in additional state aid for up to five years.

The legislation would also usher in new requirements for “coursework and instruction in computer science in public and charter high schools,” the summary said.

The bill would require parental permission for school officials to use corporal punishment.

The latest version of the legislation doesn't include requirements that schools teach cursive by the end of fifth grade and that schools submit information on salaries to the Missouri Accountability Portal.

A wide-ranging bill carrying a requirement that voters present photo identification at the polls requires one more vote in the Senate before heading to the House.

The House could then take quick action on the legislation to send it to Gov. Mike Parson.

Senate Democrats negotiated an amendment to the elections bill that would allow two weeks of no-excuse absentee voting.

Separate efforts to make it harder to approve initiative petitions have not yet gained traction in the Senate. Rowden said “maybe” Friday when asked if the upper chamber would debate the changes in the final week.

A conference committee is set to meet on legislation that originally dealt with forbidding homeowners associations from banning solar panels.

Senate Bill 820 was widened to take aim at electric vehicle ordinances in St. Louis and St. Louis County. The legislation would limit the ability of local officials to require businesses to install electric vehicle charging stations — unless the local government pays the bill.

The House had yet to act on a Senate bill dealing with crime issues. But the chamber could move to load the bill up with amendments early this week.

Senate Bill 834 would establish the Correctional Center Nursery Program, which would allow inmate mothers to reside with their babies for 18 months.

Possible House amendments include requiring compensation for Missouri prisoners who are exonerated but not through DNA analysis.

Another amendment would cap the amount correctional centers could charge inmates for domestic calls at 12 cents per minute.

Editor's note: a previous version of this article included out-of-date information on provisions included in the education bill.

The Missouri Supreme Court has denied a request by U.S. Senate candidate Mark McCloskey and his wife to give free legal advice to Project Veritas.

The $500 million proposal was approved by lawmakers after they approved a state budget with more than a $1 billion surplus.

The local chapter of the National Women’s Political Caucus was sharply criticized by some members for endorsing Jane Dueker, a candidate for St. Louis County executive.

How much did it cost St. Louis County to delay convention center bonds? An extra $88 million

St. Louis abortion provider tells vice president, ‘a post-Roe reality is coming for all of us’

Vice President Kamala Harris met Thursday with abortion providers from some of the most restrictive states in the country, including Missouri.

The redistricting process takes place once per decade to adjust for changes in population.

Loop Trolley to resume service Aug. 4, but not year-round

The trolley, which hasn’t run regularly since the end of 2019 due to financial and operational problems, will operate Thursdays through Sundays until Oct. 15. Plans call for it to start up again next spring.

The St. Louis Board of Aldermen will return next week to gathering online after someone at last week's meeting tested positive for the coronavirus.

Debate over debates emerges in Missouri ahead of Aug. 2 party primaries

Several Missouri candidates are needling their opponents about debates ahead of the Aug. 2 primary.