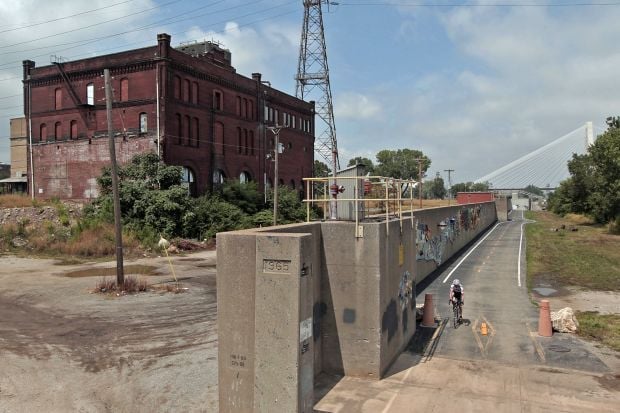 Replacing this with a new football stadium is the best argument for passing Board Bill 219. Photo by Huy Mach, hmach@post-dispatch.com 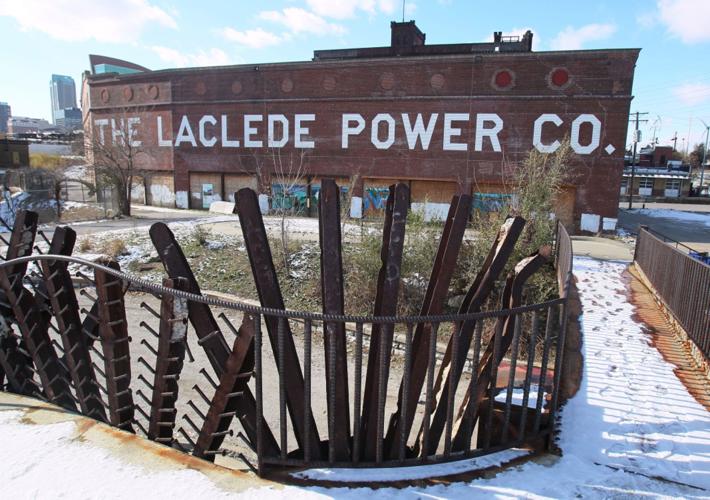 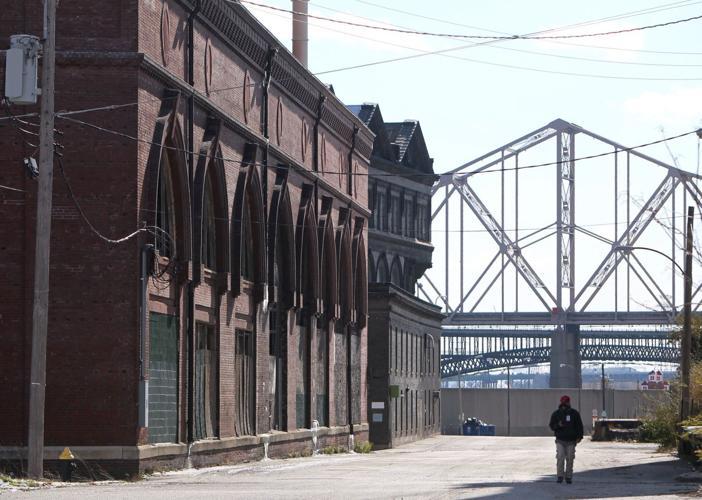 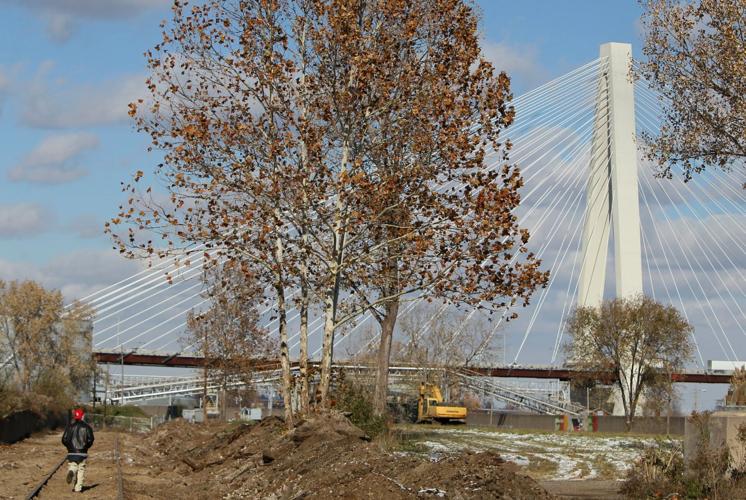 A man walks on train tracks south of the Stan Musial Veterans Memorial Bridge. The riverfront area north of Lumiere Place and south of the bridge is thought to be the preferred site for a new football stadium in St. Louis. (Photo by Roberto Rodriguez, rrodriguez@post-dispatch.com) 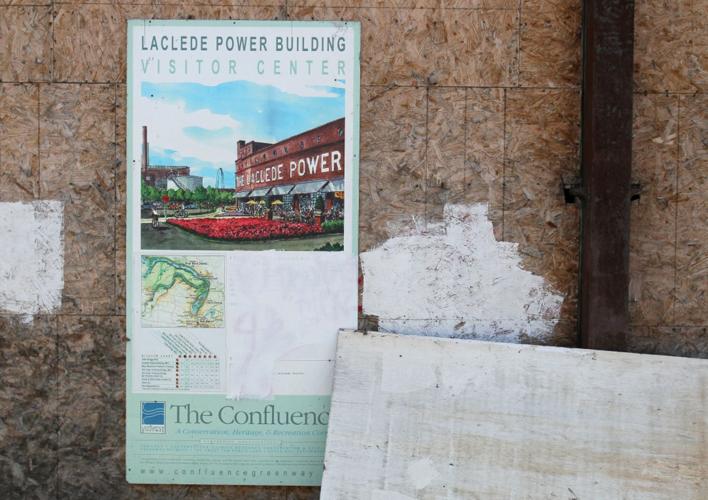 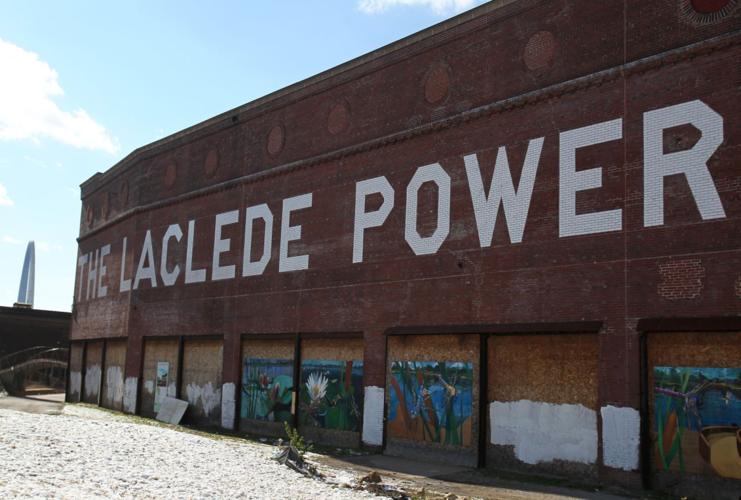 ST. LOUIS • Over the last year and a half, a local agency has quietly snapped up land among the overgrown lots and crumbling warehouses north of downtown, with hopes of breathing new life into the north riverfront trail — and, through it, sprouting shops, businesses, restaurants and homes.

Now leaders of the Great Rivers Greenway trails district have commissioned a six-month, $330,000 study of the old industrial sector.

Their dreams stretch beyond the trail itself: Loft apartments. Beer gardens. A theater. Bike shops. A treehouse. Perhaps a boulder garden for rock climbing, a mountain-bike playground or even a whitewater kayaking park in the Mississippi River.

Other cities have succeeded with such adventurous ideas.

“There’s no reason greenways can’t be more than a trail,” said Greg Brumitt, the district’s director of conservation and community service.

It is a lofty goal here. Countless plans and reports have studied what to do with the north riverfront. Many have promised in years past that development was coming.

But leaders of the Great Rivers Greenway trails district say there’s momentum now: They’ve spent $525,000 to buy three key properties. Recent studies have shown potential. And a patchwork of redevelopment has sprouted in the area, from the massive Gateway Arch grounds renovation to the new Bissinger’s chocolate factory on North Broadway. There’s even talk of building a new football stadium on nearby land.

“Look at our track record,” said Emma Klues, the district’s communications manager. “We have 106 miles of trail on the ground. Look what’s happening on the riverfront. There’s incredible momentum there.”

This month, the trails district hired a conglomerate of design and engineering firms to draw a plan for north riverfront growth. Brumitt called it an “exploration.”

“We all know we’re a river town,” he told the Post-Dispatch this summer. “And we need to leverage our river assets much better.”

Brumitt has some firsthand experience leveraging rivers. He worked in Dayton, Ohio, when the county parks district began building whitewater in the Mad River, adding concrete and boulders to create a water park for kayakers and canoers.

Cities from Reno, Nev., to Chattanooga, Tenn., have pushed elaborate parks to reconnect downtowns to riverfronts.

“People love to be on the water,” said David Rouse, director of research for the American Planning Association. “It attracts people — people who like to spend money and have a good time.”

In Denver, planners have slowly transformed the confluence of the South Platte River and Cherry Creek into acres of riverfront park, with whitewater for kayaking and plenty of river access, now one of the most vibrant mixed-use developments downtown, urbanists there say.

In Philadelphia, city leaders have a plan to transform downtown Delaware River frontage with low-rise housing, wetlands parks and miles of walking and biking trails.

And in Seattle, a city separated from its sea by a four-lane raised highway, officials are looking to “transform the waterfront,” adding a cycling track, walking gardens and boardwalks, plus bridges and overlooks onto Elliott Bay.

“I think there’s a lot of creativity going on,” Rouse said. “It goes way beyond the traditional concept of what a park is.”

St. Louis won’t be able to do everything. A kayak park in the Mississippi, for instance, would be a “big challenge,” said Brumitt, Great Rivers conservation director. “It’s so big,” he said.

But the idea — activating public interest in the riverfront — is what Great Rivers wants to see, Brumitt continued.

For every kayaker on the water, he said, 50 are standing on the banks, watching.

‘YOU GET YOUR HOPES UP’

The north riverfront project stretches for about 45 blocks east of Interstate 70, from Eads Bridge to the Stan Musial Veterans Memorial Bridge. The proposal will also study an extra 25 blocks north of the Musial bridge to the abandoned railroad line the district has dubbed “the Trestle.”

Forum’s first task? To look at what’s been done.

In 2009, the nonprofit hiking-and-biking advocacy agency Trailnet pushed to get the vacant Laclede Power building renovated for retail and office space, but the project fizzled and the property wound up in a bank’s hands.

Later that year, a study commissioned by the city, Great Rivers Greenway and CityArchRiver, the nonprofit spearheading the Arch grounds renovation, called for a new Arch parking garage, a rehabbed MetroLink station, a park beneath the Martin Luther King Bridge, and the lighting of the giant Union Light & Power Building, among other things.

But Todd Antoine, Great Rivers planning director, said no one has looked at this specific area. It’s a special corner of the city, he said. It still has the 200-year-old street grid. There’s a flood wall to protect businesses, and river access behind the wall. “The possibilities,” he said, “are endless.”

“We’ve heard that before,” said John Reinsch, who runs Sonn Signs in an old brick warehouse about a block off the river. “They take the money and do the planning and you never hear about it again. It never finishes.”

Developers have approached his family at least three times about buying his three-story, 12,000-square-foot building. It was even under contract seven years ago, just before the Great Recession hit.

Still, his eyes glimmered a little at the prospect. “It would be great for us if it went through,” he admitted.

John Sweet, who runs a small foundation headquartered in a LEED platinum rehab with a roof garden, solar panels and a windmill, has waited years for something to happen. Now and then, someone comes up with a proposal. “And you get your hopes up,” he said. “But none of them ever really include me.”

Still, no one argues the area needs something.

Jennifer Chaffin, 41, of Creve Coeur, was out with a friend on the trail this summer. “This looks kind of desolate,” she said as she made her way around one bend. The seclusion made her nervous. “There’s not even parking.”

Benches would be nice, she suggested. Maybe some grass, food trucks, ice cream?

And certainly, she said, a better view of the river.

Landscaping should start in the next couple of weeks.

South section of Leonor K. Sullivan to open under Arch

The road, which runs along the Mississippi River near the Arch, has been under construction since November 2013.

Demolition, part of the $380 million park renovation, started last week and will take about three months.

The beetles have destroyed tens of millions of ash trees in 25 states.

The study’s goal is to revitalize the riverfront by “transforming vacant properties along the Mississippi River into public parks and recreation amenities, as well as enhancing private enterprise.”

The site will become a small park.

New walkways, trees and bike path for road under Arch

Replacing this with a new football stadium is the best argument for passing Board Bill 219. Photo by Huy Mach, hmach@post-dispatch.com

A man walks on train tracks south of the Stan Musial Veterans Memorial Bridge. The riverfront area north of Lumiere Place and south of the bridge is thought to be the preferred site for a new football stadium in St. Louis. (Photo by Roberto Rodriguez, rrodriguez@post-dispatch.com)