ST. LOUIS • Republican U.S. Senate nominee Todd Akin said Sunday that women who are victims of "legitimate rape" generally won't get pregnant — an assertion that has no apparent medical weight but may carry some heavy political implications going into the fall election campaign.

U.S. Rep. Akin, who is challenging incumbent Sen. Claire McCaskill, D-Mo., made the comment during an interview on KTVI, the St. Louis Fox affiliate. In one part of the interview, Charles Jaco asked about Akin's stance against abortion rights even in cases of rape.

"First of all, from what I understand from doctors, (pregnancy) is really rare" in rape cases, Akin said, according to a video of the interview posted Sunday on YouTube. "If it's a legitimate rape, the female body has ways to try to shut that whole thing down."

He added: "But let's assume that maybe that didn't work or something. I think there should be some punishment, but the punishment ought to be on the rapist and not attacking the child."

McCaskill, whose campaign has pressed the case that Akin is too extreme a conservative, jumped on the comments. In a tweet shortly after the clip went online, McCaskill said: "As a woman & former prosecutor who handled 100s of rape cases, I'm stunned by Rep Akin's comments about victims this AM."

She later elaborated in a written statement issued by her campaign: "It is beyond comprehension that someone can be so ignorant about the emotional and physical trauma brought on by rape. The ideas that Todd Akin has expressed about the serious crime of rape and the impact on its victims are offensive."

Condemnation of the comments came not just because of the assertion — apparently baseless — that rape victims are unlikely to get pregnant because of some internal biological defense mechanism. Critics also were incensed at the implication that some rapes aren't "legitimate" rapes.

"The female body also has ways of shutting down your whole election," said Twitter user Michelle9647, in one of dozens of tweets — virtually all chiding Akin — that were posted under the hashtag #LegitimateRape within hours of the video's release.

Akin's campaign on Sunday issued a statement to reporters via email, and later on its website and on Twitter, specifying empathy for rape victims.

"In reviewing my off-the-cuff remarks, it's clear that I misspoke in this interview and it does not reflect the deep empathy I hold for the thousands of women who are raped and abused every year," said the statement. "Those who perpetrate these crimes are the lowest of the low in our society and their victims will have no stronger advocate in the Senate to help ensure they have the justice they deserve."

The statement continued: "I recognize that abortion, and particularly in the case of rape, is a very emotionally charged issue. But I believe deeply in the protection of all life and I do not believe that harming another innocent victim is the right course of action."

The statement didn't specifically retract Akin's assertion that rape victims are unlikely to become pregnant because of some biological defense mechanism, nor did it offer any source for that assertion. Akin's campaign, when pressed on that issue, said there would be no further statement Sunday.

While much in the abortion debate is debatable, Akin's contention about the rarity of rape-induced pregnancies isn't. Medical experts say that contention, touted in some corners of the anti-abortion movement, has no basis in science. Akin is on the House Science, Space and Technology Committee.

"There is no difference between people getting pregnant after rape — there's no biological barrier there," said Dr. Anthony Shanks, assistant professor of maternal fetal medicine at Washington University.

A 1996 study by the American Journal of Obstetricians reported a 'significant" rape-pregnancy rate of 5 percent among victims ages 12-45, with more than 32,000 rape-related pregnancies annually in the U.S.

It's not the first time Akin's strong views have created political problems for him. In 1991, Akin supported a law cracking down on marital rape but took criticism for worrying that it might be misused "in a real messy divorce as a tool and a legal weapon to beat up on the husband."

Last year, Akin co-sponsored a bill that would have limited federal help to pay for abortion for victims of only "forcible rape," drawing a furor from critics who asked what other kind there was. The language was ultimately dropped from the bill.

Sunday's controversy comes after a few controversial weeks for Akin. McCaskill's initial attacks against him after he became the GOP nominee on Aug. 7 accused him of wanting to privatize Medicare and Social Security and do away with federally backed college loans — prompting the unusual reaction from Akin's campaign of unapologetically confirming the substance of the attacks and standing by it.

Last week at the Missouri State Fair, Akin said he believed that the federal government should not only get out of all elementary education issues but should also drop school lunch subsidies for underserved children. McCaskill's response noted that such a move would hurt not only the children served by those meals, but also the farmers who ultimately provide the government with the food. 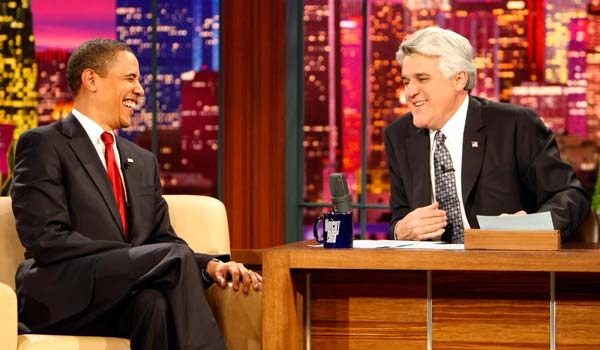 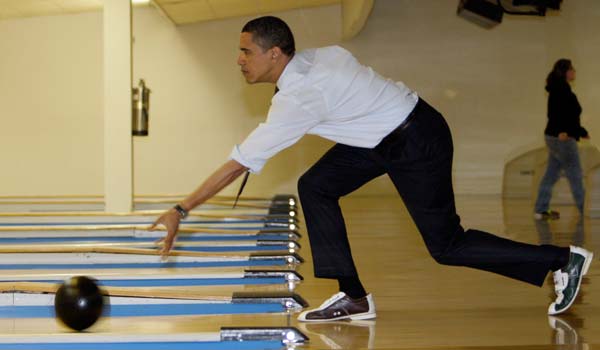 It was bad enough when Barack Obama bowled a 37 in Pennsylvania in 2008. But months later he dug a deeper hole when he:
Wrong.Right. Obama apologized for the joke, which he had made on "The Tonight Show With Jay Leno." 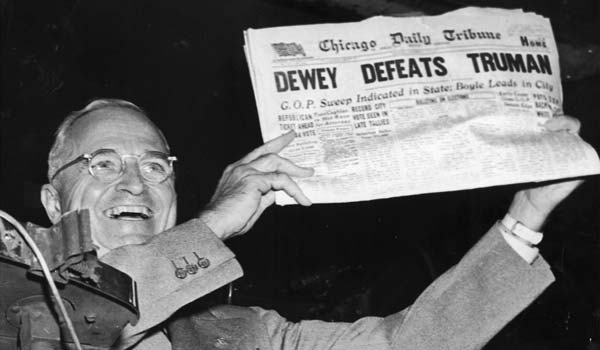 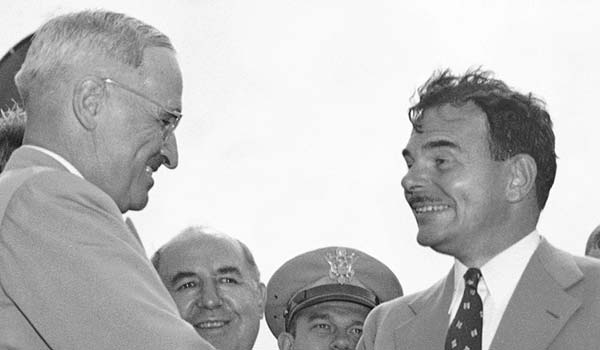 In 1948, who did Republican presidential candidate Thomas Dewey proclaim "probably should be shot at sunrise"?
Wrong.Right. Dewey was in Beaucoup, Ill., speaking from a train, when it lurched backward. The engineer said: "I think just as much of Dewey as I did before, and that's not very much." 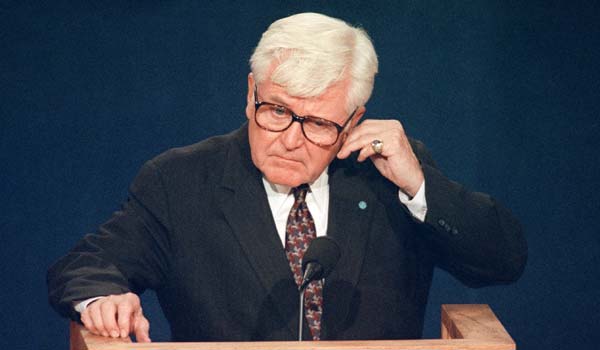 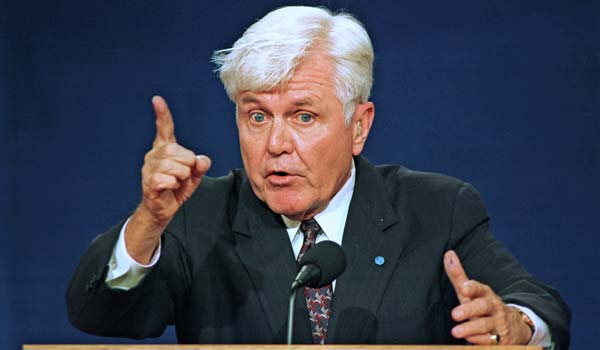 In 1992, Vice Admiral James Stockdale was the vice presidential nominee on Ross Perot's third-party ticket. How did he begin his opening statement in the Oct. 13 VP debate?
Wrong.Right. While Stockdale's opening line actually drew applause from the audience, his overall performance was a disaster, mocked later that week on "Saturday Night Live." 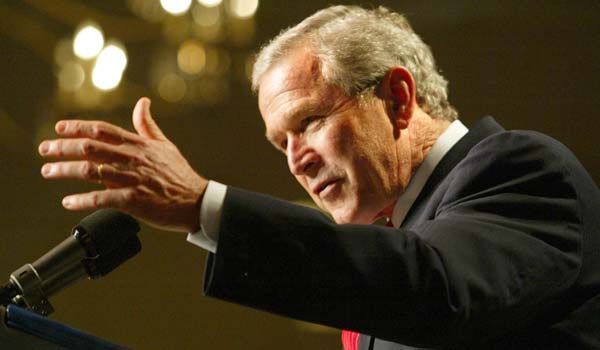 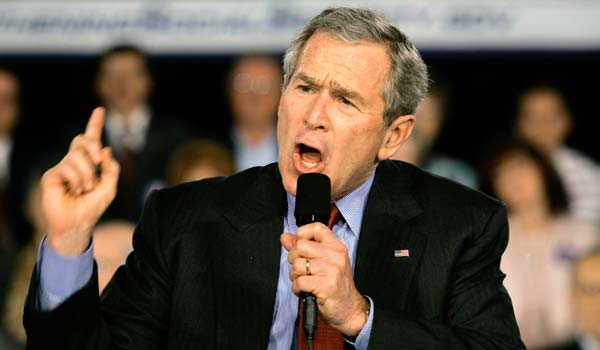 Finish the following George W. Bush quote from 2005: "Fool me once, shame on ... shame on you. Fool me..."
Wrong.Right. Bush made so many memorable linguistic gaffes over the years that they have have a name and a Wikipedia entry: "Bushisms." 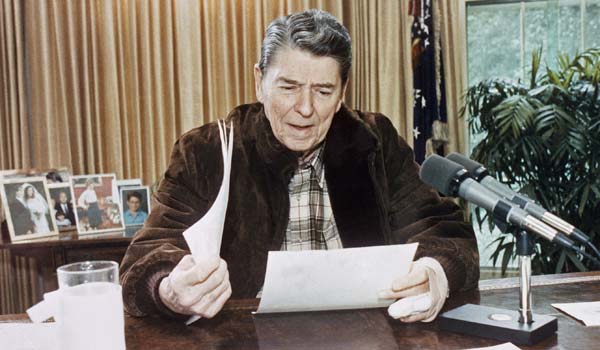 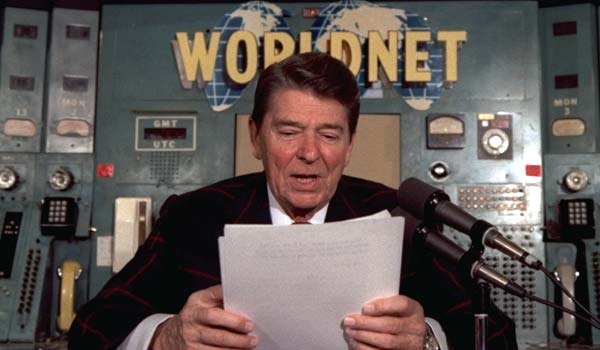 True or false: During a sound check before a weekly radio address in 1984, President Ronald Reagan said: "...I've signed legislation that will outlaw Russia forever. We begin bombing in five minutes."
Wrong.Right. Reagan's gaffe was leaked to the public, leading the Soviets to put their army on alert briefly. 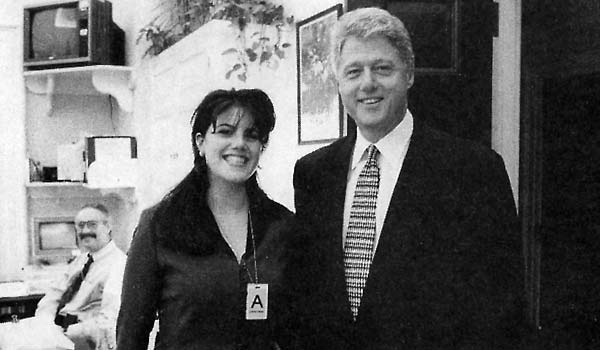 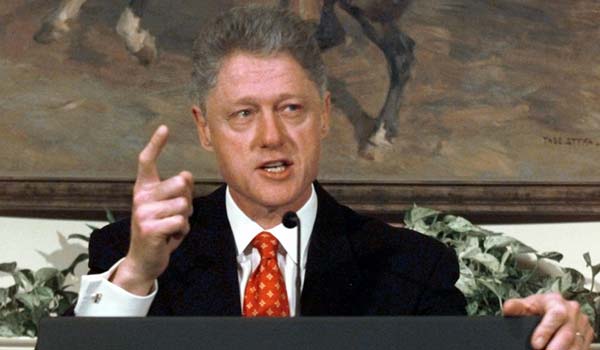 When President Bill Clinton said, "I did not have sexual relations with that woman ...", to which woman was he referring?
Wrong.Right. The Lewinsky scandal ultimately led to Clinton's impeachment, but he was acquitted of all charges and remained in office. 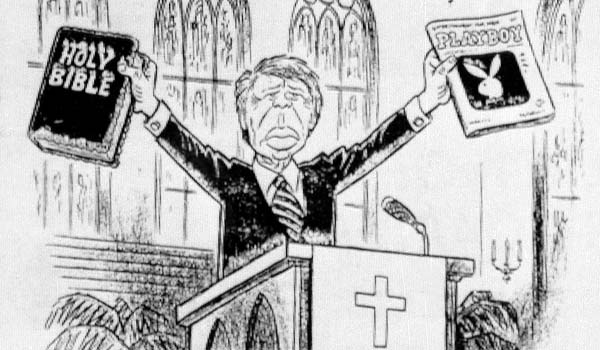 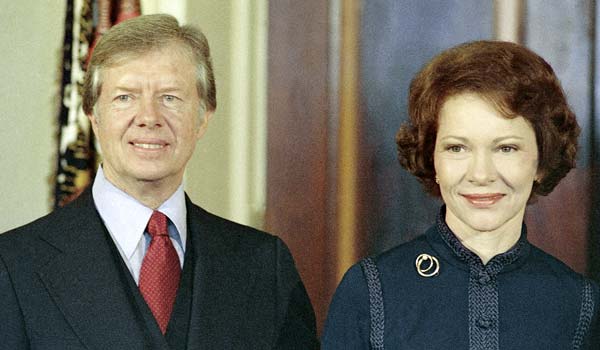 To which magazine did President Jimmy Carter admit in 1976 that "I've looked on many women with lust. I've committed adultery in my heart many times"?
Wrong.Right. While this admission hurt Carter's support among women and evangelicals, President Gerald Ford committed blunders of his own, allowing Carter to win the presidency. 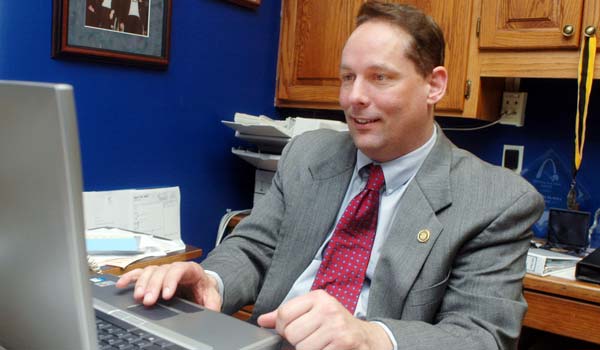 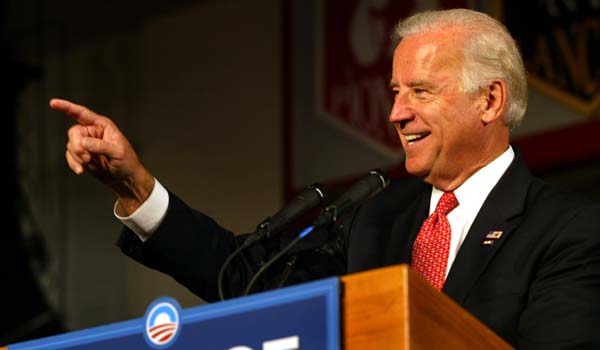 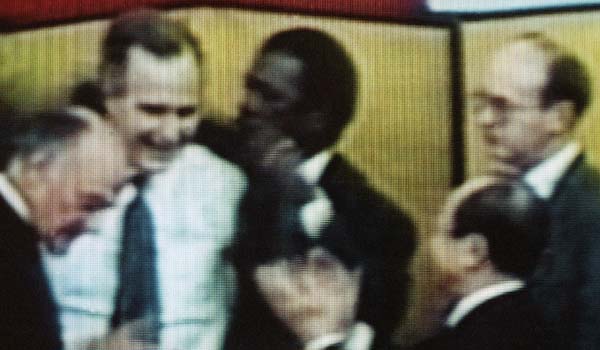 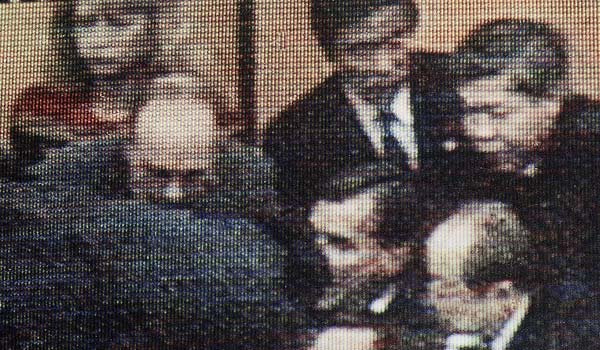 Which U.S. president vomited onto Japanese Prime Minister Kiichi Miyazawa at a state dinner?
Wrong.Right. After this incident, the Japanese coined a new expression, "Bushu-suru," which means "to do the Bush thing." 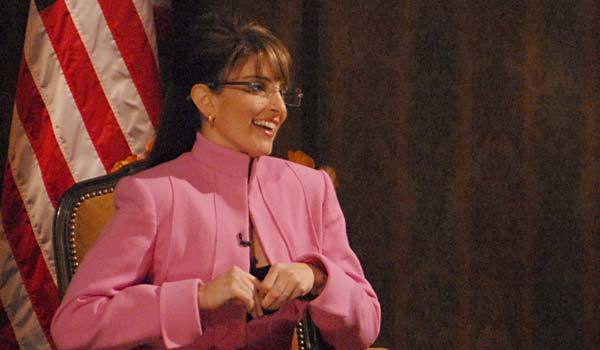 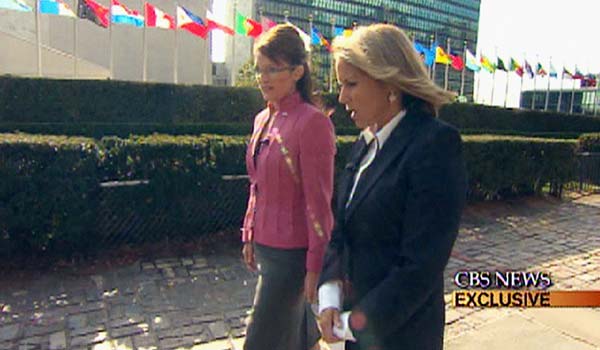 Which of the following was NOT said by Sarah Palin during her infamous 2008 interview with CBS's Katie Couric?
Wrong.Right. The "maverick" line actually was spoken by comedian Tina Fey in a "Saturday Night Live" skit where she protrayed Palin.

During a quail hunt in 2006, Vice President Dick Cheney accidentally shot 78-year-old Harry Whittington. Who was the last sitting vice president to shoot a man?
Wrong.Right. Burr challenged Secretary of the Treasury Alexander Hamilton to a duel in New Jersey in 1804. The outcome? Hamilton died the next day. 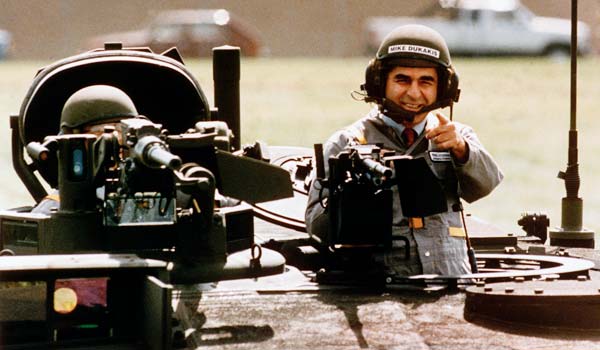 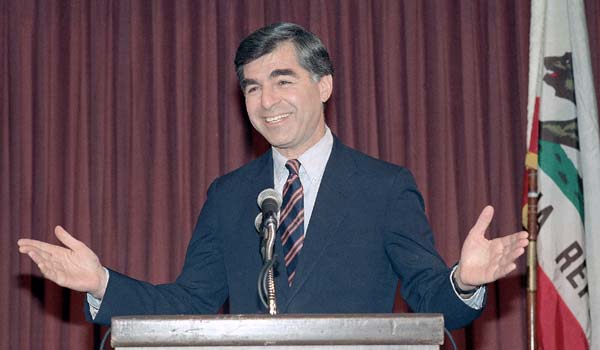 What photo op gone awry is credited with leading Democratic presidential candidate Michael Dukakis to defeat in 1988?
Wrong.Right. George Bush's campaign used footage of Dukakis in the tank in TV ads to portray Dukakis as incapable to be a leader. 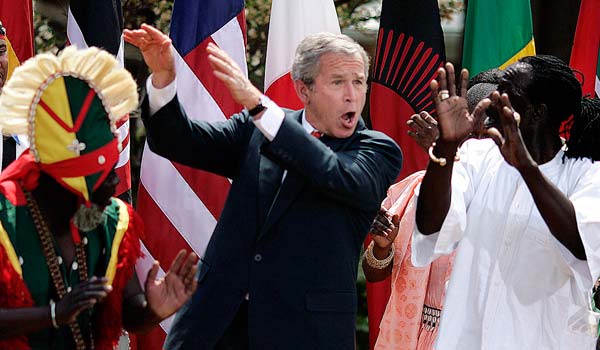 Editorial: Todd Akin's ignorant comments on rape are no surprise

Plenty of politicians have suffered from foot-in-mouth syndrome. How well do you remember these political gaffes?