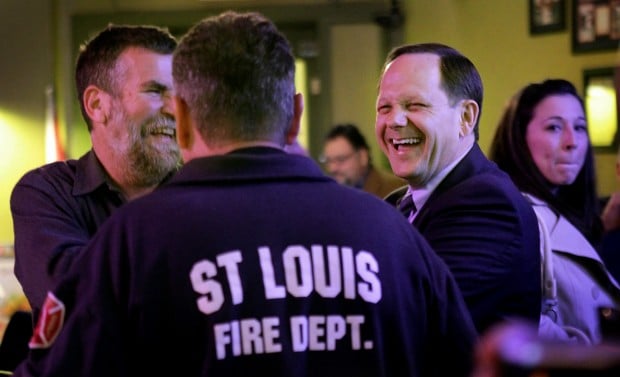 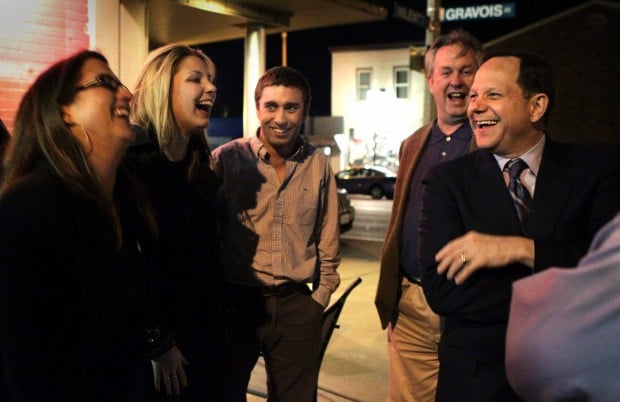 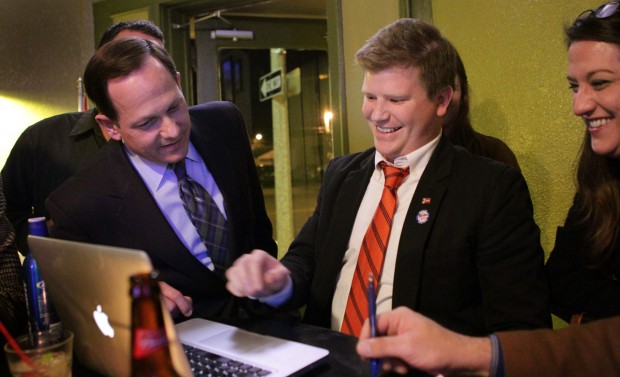 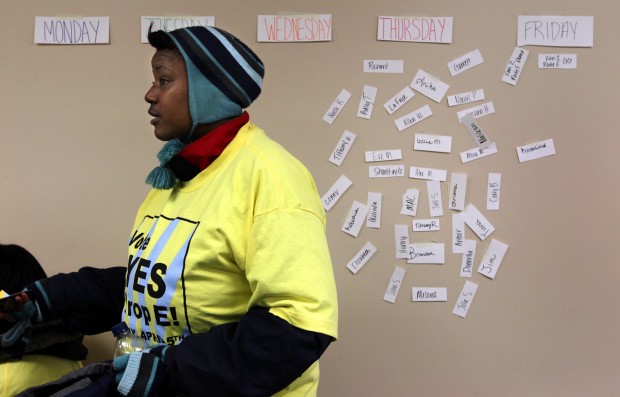 March 24, 2011 - Proposition E paid staff members, including Jarris Bell, get ready to canvass from the Prop E headquarters on Watson Road Thursday afternoon. A daily pin-up board tracks who is scheduled to work the streets, handing out literature and asking for support to continue the earnings tax. Robert Cohen rcohen@post-dispatch.com
BY DAVID HUNN • > 314-436-2239

With a better-than-expected turnout of 20 percent, city voters approved the earnings tax up by a ratio of almost 9 to 1.

Officials who gathered at Walker's Restaurant & Bar on Gravois Avenue called it a temporary victory. They reminded voters that the city's earnings tax, which brings in roughly $140 million in annual revenue, would be up for reconsideration at the polls every five years.

City leaders said that, despite the victory, they would immediately begin planning to replace the tax and streamline government.

"I was very pleased with all the people who came together. The future of our city was at stake," Mayor Francis Slay said. "What we saw here was a step, an important step toward what I believe to be a necessary and inevitable change in the way the city delivers services and the way the region is governed."

The elections, held in Kansas City as well as St. Louis, were forced after billionaire financier Rex Sinquefield got Proposition A passed statewide in November. It bars the creation of any new municipal earnings tax in Missouri, and phases out the ones in St. Louis and Kansas City over 10 years - if they ever fail in city elections.

Despite a more organized opposition, Kansas City voters also seemed to be reaffirming their earnings tax in returns Tuesday night.

The win for the earnings tax shows that city voters understand, even in these times, how important it is to city government, said Lana Stein, a retired University of Missouri-St. Louis political science professor. "We're in this very anti-tax, Tea Party mode," she said. "People generally don't like to tax themselves."

And this year could have been the perfect storm, said Kail Padgitt, a staff economist at the Tax Foundation in Washington.

"This is a year where it could" have failed, Padgitt said. Local and state officials have raised taxes for the past few years, trying to combat the recession, he said.

But with many states now showing sluggish recoveries, anti-tax advocates could have taken this moment to urge the end of such income taxes.

Still, said Padgitt, it is unlikely that any city could simply cut one-third of its services.

Richard Callow, campaign manager for the pro-earnings-tax campaign, dubbed "Citizens for a Stronger St. Louis," said he knew of no organized campaign against the tax in St. Louis.

Still, Callow organized an army of paid workers, volunteers and city officials in what he called an "almost unprecedented flurry" of community meetings and neighborhood canvassing.

Slay personally spoke at 87 of 104 meetings.

Volunteers spread the word in such organizations as Metropolitan Congregations United, Jobs with Justice and the Sierra Club of St. Louis, each preaching to their constituents that the loss of the tax would mean the loss of social services, job programs and environmental sustainability measures.

This past weekend, 300 rallied at the World's Fair Pavilion in Forest Park. Firefighters barbecued.

"More remarkable than the lack of opposition is the near unanimity of support," said Callow. "A large number of groups that have little in common stood together."

In total, the campaign raised about $650,000. Callow said he had even saved about $200,000 in reserve, to be spent on advertisements and media, should an anti-tax campaign suddenly rear up.

And they did. Only a few thousand came out against the tax, compared with tens of thousands for it.

At Mason School, on Southwest Avenue near Dogtown, voter after voter left saying they had come to vote for Proposition E, as it was called.

"I don't want to see anybody lose their jobs," said Adrian Jones, 43, from Clifton Heights.

"We need it very desperately," said Mary Hulsey, 59, from the same neighborhood. "There won't be street repairs, trash, snow removal."

Still, Callow, echoing many public officials, said he didn't think he'd be asked to do the same in five years. "I don't think there's going to be another campaign on this earnings tax," he said.

City officials, he said, have already begun talking about other ways of getting the revenue the tax brings in.

Officials are talking openly about cooperating in new ways.

Campaign that fought for earnings tax paid it, too

The campaign to keep the city's 1 percent earnings tax paid $2,140 in payroll taxes, including the earnings tax.

Proposal for 1 percent school sales tax in Madison County is rejected by voters.

Fred Heitert, the board’s only Republican, loses in 12th Ward.

March 24, 2011 - Proposition E paid staff members, including Jarris Bell, get ready to canvass from the Prop E headquarters on Watson Road Thursday afternoon. A daily pin-up board tracks who is scheduled to work the streets, handing out literature and asking for support to continue the earnings tax. Robert Cohen rcohen@post-dispatch.com
© Copyright 2021 STLtoday.com, 901 N. 10th St. St. Louis, MO | Terms of Use | Privacy Policy
Powered by BLOX Content Management System from TownNews.com.
You don't have any notifications.