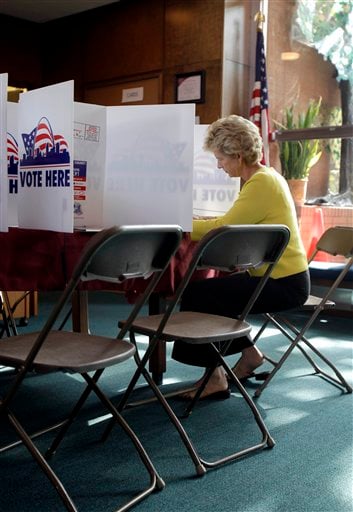 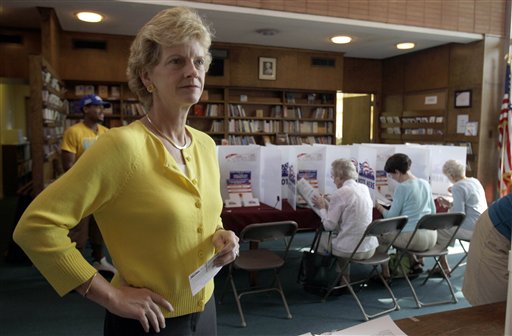 Aug. 3, 2010 -- Democratic Secretary of State Robin Carnahan stands in line to cast her ballot in the Missouri primary election Tuesday in St. Louis. Carnahan is running for the open U.S. Senate seat being vacated by the retirement of Republican Sen. Kit Bond. (AP Photo/Jeff Roberson)
BY JAKE WAGMAN > 314-340-8268

Nowhere in the U.S. Senate hopeful's list of achievements are voters told about her efforts leading a group of underfunded advocates that took on — and defeated — one of Washington's most powerful special interests.

In a year when even veteran office-seekers such as Carnahan are running against the political establishment, such a David-versus-Goliath tale would make prime grist for an outsider's campaign narrative.

But not when the issue is guns — and Goliath is the National Rifle Association, known for its deep pockets and long memory.

Eleven years ago, Carnahan led the successful opposition to a statewide ballot issue backed by the NRA that would have changed Missouri law that, at the time, prohibited carrying concealed firearms. The victory was pivotal to Carnahan's political development, yet also short-lived: Four years later, the Legislature overturned the results of the vote.

Now, it seems, Carnahan would prefer to forget about her role in the fight altogether. She doesn't talk about it on the stump, cite it in campaign literature or mention it on her website. Her Republican rival has accused her of obscuring her stance on the Second Amendment.

Carnahan would hardly be the first statewide candidate — or even the first member of her family — to run with a carefully calibrated stance on gun control, an issue that has been a flashpoint in the urban-rural schism of Missouri politics.

Of more concern to Carnahan, perhaps, is whether the gun lobby will use its considerable resources to jump back into Missouri politics, this time taking aim at Missouri's U.S. Senate race.

"We're determined to make sure that every gun owner in Missouri knows her background when it comes to the Second Amendment," said Chris Cox, the NRA's chief lobbyist. "If she thinks she can play gun owners for fools, she's going to find a grass-roots army working to defeat her."

When asked about her position on gun control these days, Carnahan says she supports the constitutional right to bear arms, but tends not to elaborate.

"You know what? It's not the issue that's on people's minds the most right now," said Carnahan, now Missouri's secretary of state. "The issue that people are thinking about the most is what's going on with the economy, and how we're going to fix what's broken in Washington."

Guns were a much bigger issue in Missouri in 1999, when Carnahan led the high-profile fight against a ballot measure to allow concealed firearms.

"It would not have been defeated without Robin," recalled Mary Wertsch, a gun-control proponent who worked with Carnahan on the campaign.

In the early to mid-1990s, the NRA was smarting from a series of losses on Capitol Hill. The approval of an assault weapons ban and legislation requiring background checks on gun sales represented a twin defeat.

The group stepped up its efforts to elect friendly lawmakers in Washington and opened a new focus: state capitols. Several states passed laws, backed by the NRA, allowing residents to carry firearms hidden underneath their clothing.

But the push was initially unsuccessful in Missouri. Concealed carry legislation had bipartisan support in Jefferson City, but not enough — at least not at the time — to outflank the threat of a veto from then-Gov. Mel Carnahan, Robin's father.

The gun lobby's response was to take the issue directly to the people, with a statewide referendum — Proposition B — that would not only give the well-financed NRA an advantage, but could also serve as a test case for future gun control battles.

Leading the effort for the NRA was a Maryland lobbyist who had previously fought attempts in other states to restrict bear hunting and require trigger locks.

How Robin Carnahan came to be the campaign manager for the group opposing Prop B is subject to some political folklore.

At the time, Carnahan said she was spurred by seeing a pro-Prop B bumper sticker and discovering there was no organized effort against it.

But family played just as much a role, if not a larger one.

In a recent interview, Carnahan recalled talking about the issue over dinner with her dad.

"He was the one who asked her to head up the campaign," said Peter Herschend, a vocal Prop B opponent whose family owns the Silver Dollar City amusement park in Branson. "I think that was very simply because it was not politically feasible for him to head it up."

The Proposition B campaign attracted national attention. Charlton Heston, the actor and NRA president, campaigned in Missouri. So did James Brady, the former presidential aide who become a gun control advocate after taking a would-be assassin's bullet.

In leading the charge against the proposition, Carnahan drew on her family connections and knowledge of the state's political dynamics.

She convinced Hillary Clinton, then the nation's first lady, to record a "robo-call" against the proposition. She correctly predicted the race could be won by focusing on the St. Louis and Kansas City areas, population centers where attitudes about gun control are drastically different than those outstate.

The result was that supporters of Proposition B failed at the polls — 51.7 percent to 48.3 — despite outspending the other side more than 4 to 1.

Even opponents give Carnahan credit.

"She did an outstanding job," said former state Rep. Joe Driskill, a southeast Missouri Democrat who led the push for concealed carry in Jefferson City. "I know that she's tenacious."

Not that there weren't missteps. The involvement of the local U.S. attorney who openly campaigned against Prop B prompted an investigation by the Justice Department.

The campaign committee led by Carnahan pulled a misleading ad that showed an Uzi gun it said could be carried covertly if Prop B passed. (The gun pictured was actually a rifle already banned under federal law.)

"The 'wrong type of Uzi' kind of makes my point," Carnahan said in an interview earlier this summer. "I don't think there is a right type of Uzi that you ought to be able to take into a sports stadium."

Supporters say Carnahan's strength in the campaign was her ability to harness consensus among disparate groups, from Republicans such as Herschend, who worried about allowing guns into Silver Dollar City, to the Rams and Cardinals, who did not want fans bringing concealed firearms into games.

"Her main impact was working behind the scenes, knowing who to call," said Wertsch, former director of Missourians Against Handgun Violence. "Robin was able to talk in such a way that she could bring very different actors to the table."

Despite Carnahan's victory, carrying a concealed firearm in Missouri became legal in 2003 after the state Legislature overrode Gov. Bob Holden's veto. The current law contains changes from the original proposition — such as a ban on bringing guns in sports stadiums — that Carnahan says make it "more acceptable."

"I've been pleased that we haven't seen a lot of problems," Carnahan said.

On Friday, the NRA made its first jump into Missouri's U.S. Senate race, announcing its endorsement of Blunt, who has an "A" rating from the association, with a six-city swing across the state.

"We're going to be active in campaigns all across America, including in Missouri," said Cox, who is chairman of the group's Political Victory Fund. "We're going to make sure that every gun owner in the state knows that, despite election-year rhetoric, a vote for Robin Carnahan is a vote for gun control."

Blunt has complained that voters "generally don't know where she is" on gun control.

"And that's her calculated view of what this election's all about," Blunt said.

There is a tradition of a layered approach to Second Amendment issues in the Carnahan family. Jean Carnahan, a former U.S. senator, supported trigger locks and a ban on assault weapons — anathema to the NRA — but showcased her gun credentials on the campaign trail. She organized "Sportsmen for Carnahan" and bragged of earning a sharpshooter's medal in college.

During her unsuccessful 2002 re-election bid, Jean Carnahan participated in a skeet shooting event in the Bootheel, which at the time was panned as an attempt to bolster her poll numbers with male voters.

Robin Carnahan has sought to burnish her rustic appeal in this year's Senate race. She has rarely missed an opportunity to mention that she still runs the family cattle farm, where, she says, she also keeps several guns. Does that mean she has a concealed carry license?

For the record: Missouri Senate race

In Missouri's race for the U.S. Senate, the candidates' records include parts they'd rather not talk about — but their opposition does.

Candidates more similar than it appears

If elections were held over coffee and steakburgers, the political world would be a friendlier place.

JEFFERSON CITY -- As if there was much doubt, the Senate campaign of Robin Carnahan made one thing clear in a conference call with reporters today: the campaign thinks Roy Blunt is corrupt and that's going to be the primary theme of their campaign.