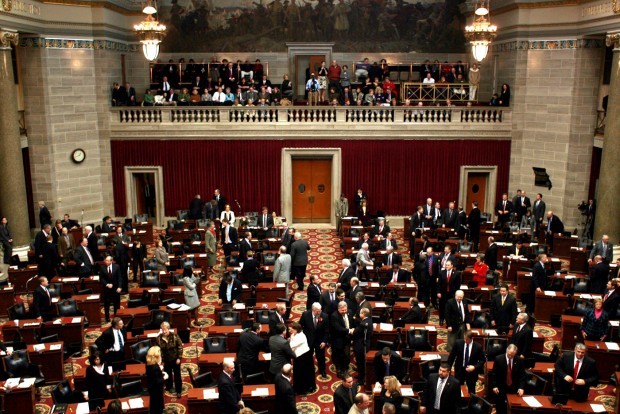 JEFFERSON CITY • When members of a Missouri House committee met in April to discuss a bill to expand the use of handguns for hunting deer, they didn't do it on an empty stomach. The National Rifle Association — a key proponent of the bill — bought them lunch.

Likewise, when the House Utilities Committee gathered in the last legislative session, it was often over a meal bought by one of the companies under its jurisdiction, including the state's largest natural gas and electricity providers.

And in the hectic days at the end of the session last month, lobbyists with an interest in the proceedings paid to deliver burritos, pies and other provisions to weary lawmakers.

While members of the Missouri Legislature are sequestered in Jefferson City, they work long hours but rarely go hungry, thanks to a dedicated corps of lobbyists and interest groups that spends hundreds of thousands of dollars a year on food.

During the 4½-month session that ends in May, it is difficult to walk through the Capitol and not see a trade association or government relations firm feeding lawmakers breakfast, lunch or late-afternoon snacks.

Often, meals are tailored to a specific committee — and paid for by a group with business before that committee.

In a political system that allows corporations to shower state officials with concert tickets, passes to sporting events and unlimited campaign donations, lawmakers say that seizing on the modest fare from lobbyists is like picking low-hanging fruit — which, like pastries and coffee, is delivered weekly to the offices of party leaders.

Critics acknowledge it is unlikely that a vote can be bought with a slice of pizza or a bucket of barbecue. But the practice does, they say, create the perception of a cozy relationship between lawmakers and influence peddlers.

Other states limit the ability of lobbyists to buy food for lawmakers. South Carolina and Florida prohibit any gifts from lobbyists, including food. In Illinois, lobbyists can't spend more than $75 per lawmaker on a meal.

In Missouri, the perk seems here to stay — most lawmakers complain more about the calories than the potential conflicts of interest. Even legislators who are otherwise bullish on ethics reform eat the free food, and accept the lobbyist giveaways as an entrenched Capitol custom.

"Similar to an army, I think the Legislature runs on its stomach," said Dave Dillon, a spokesman for the Missouri Hospital Association, which has spent about $113,000 buying lawmakers food since 2008, more than any other organization.

ROOTS OF A TRADITION

Food bought by Jefferson City lobbyists is delivered directly to lawmakers outside the chambers, doled out on tables set up in the marbled hallways, dropped off in the offices of party leadership and served in meeting rooms at catered committee hearings.

It's so prevalent that most Capitol denizens don't give free food a second thought.

"How often do we think of the air we breathe?" said Franc Flotron, a lobbyist and former state senator from Chesterfield.

Some say the tradition goes back at least 30 or so years ago when the wife of Harold Caskey, a state senator from Bates County, brought in Mennonite pies for her husband's colleagues.

Along the way, the duty of feeding lawmakers fell almost exclusively to lobbyists.

There is no limit on the amount of food that can be bought for legislators — lobbyists need only report the cost, recipient and client paying for the meal to the state Ethics Commission.

In 2010, lobbyists spent nearly $415,000 on food for legislators, from bagels and brownies to chicken and seafood. Through April of this year, lobbyists spent about $388,000, a number that will go up when May figures are added.

Those figures account only for group meals — they don't include the thousands of dollars spent on food and drink for individual lawmakers.

In and around the Capitol, meals prepared for groups of lawmakers range from no-frills continental breakfasts to festive food events.

The state Canoe and Floaters Association in April joined with the professional auctioneers organization and others to host a luau for House Democrats. The previous month, car dealers paid more than $1,200 for a Senate crab boil. The state's newspapers spent $2,200 for Missouri Press Association Day in February.

No occasion, it seems, was too small to break out the plates.

In February 2010, the Missouri Cable Telecommunications Association spent $547 to buy lunch for "Filing Day," when lawmakers sign up for re-election. This year, several benefactors took turns catering a Bible study group for lawmakers.

"During the course of a day, people don't know whose food they're eating or what food they're eating," said Calvin W. Call, executive director of the Missouri Insurance Coalition. "They're grabbing food to get through a grueling day."

Sometimes lawmakers don't need to search for food — it finds them.

The Insurance Coalition during the last session made a weekly fruit delivery to House and Senate offices. The Hospital Association, whose members depend heavily on state-approved Medicaid funding, regularly drops off groceries.

"Sometimes you come back to your office in the Capitol and food has landed there," said Rep. Jason Kander, D-Kansas City. "You don't know where it came from, so you give it away."

Lawmakers say accepting free food from lobbyists helps them make the most of their time. They say they are not swayed by the convenience because they are often too busy to notice who is footing the bill.

"If there's food delivered to the floor, most of the time I have no idea who paid for it. Quite frankly, I don't care," said Rep. Mike Colona, D-St. Louis. "If I had to stop and run out the door to go to McDonald's or a pizza shop to get lunch, I would miss something."

When lobbyists buy food for 163 representatives during a session, the goal is more likely to be keeping the legislative gears grinding than swaying particular lawmakers. But some meals take place in a more intimate setting, where those paying for the food have a direct stake in the actions of those eating it.

Many House committee meetings — often the most crucial step in crafting legislation — feature food bought by corporations with business before that committee. The meals usually don't total more than a few hundred dollars each.

The chairman of that panel — Rep. Darrell Pollock, R-Lebanon — said the committee tries to avoid arrangements that may appear like a direct conflict — hearing a telecommunications bill, for instance, on a day when a phone company is buying the refreshments.

Still, Pollock said, some lawmakers on his committee are diabetic and need to eat regularly.

"I don't what their blood sugar dropping to nothing," Pollock said.

In general, lawmakers in the House consume more free food than their Senate counterparts. Not only are there more seats in the House — 163 compared with 34 — but Senate decorum rules frown on catered committee hearings.

What they are trying to do, Messmer said, is forge a relationship that could pay off later. By buying their meals, lobbyists are gaining access to legislators.

"We would be outraged if other professions did this," Messmer said. "But we turn a blind eye to it — most of us do — when it comes to our Legislature."

Lobbyists say they buy food for lawmakers for the same reason they take legislators to baseball games or contribute to their campaigns — for a subtle advantage that may help their client or cause.

"Meals such as this are basically motivated by the expectation that you helped save people time in their busy schedule," said Flotron, the lobbyist and ex-senator. "Hopefully, they'll have some time for you when something comes up that you want to talk to them about."

Not all lawmakers participate in the Capitol buffet.

"My policy is, I don't accept anything," said Sen. John Lamping, R-Ladue, who is in his first year in Jefferson City. "We should hold ourselves to a much higher standard than the average person."

Lawmakers aren't the only ones eager to keep the spigot flowing.

Much of the food bought for the Legislature comes from local Jefferson City restaurants, which count on the lobbyist purchases for a good chunk of their business.

Cafe Via Roma's proximity to the Capitol — it's a short walk across High Street — has made it a favorite among Jefferson City lobbyists. Count owner Audrey Johanns as a fan of the food giveaways.

"Everybody's got to eat," Johanns said. "They would definitely be less productive if food wasn't brought in."

Plus, for all the talk in the Capitol about boosting the economy, lawmakers are actually creating jobs with their appetites — Johanns said she hires the equivalent of three part-time workers to cover the extra demand when the Legislature is in session.

Lawmakers got Cirque du Soleil tickets, among other goodies, from Capitol lobbyists in the month of May.

The Ethics Commission has the power, but not the staff, to initiate its own investigations.

Summer could not seperate lobbyists from those they are paid to influence.