Become a Member
Read Today's E-edition
Share This
‘It should have been torn down’: House that killed St. Louis firefighter had history of neglect
0 comments
Share this
1 of 2 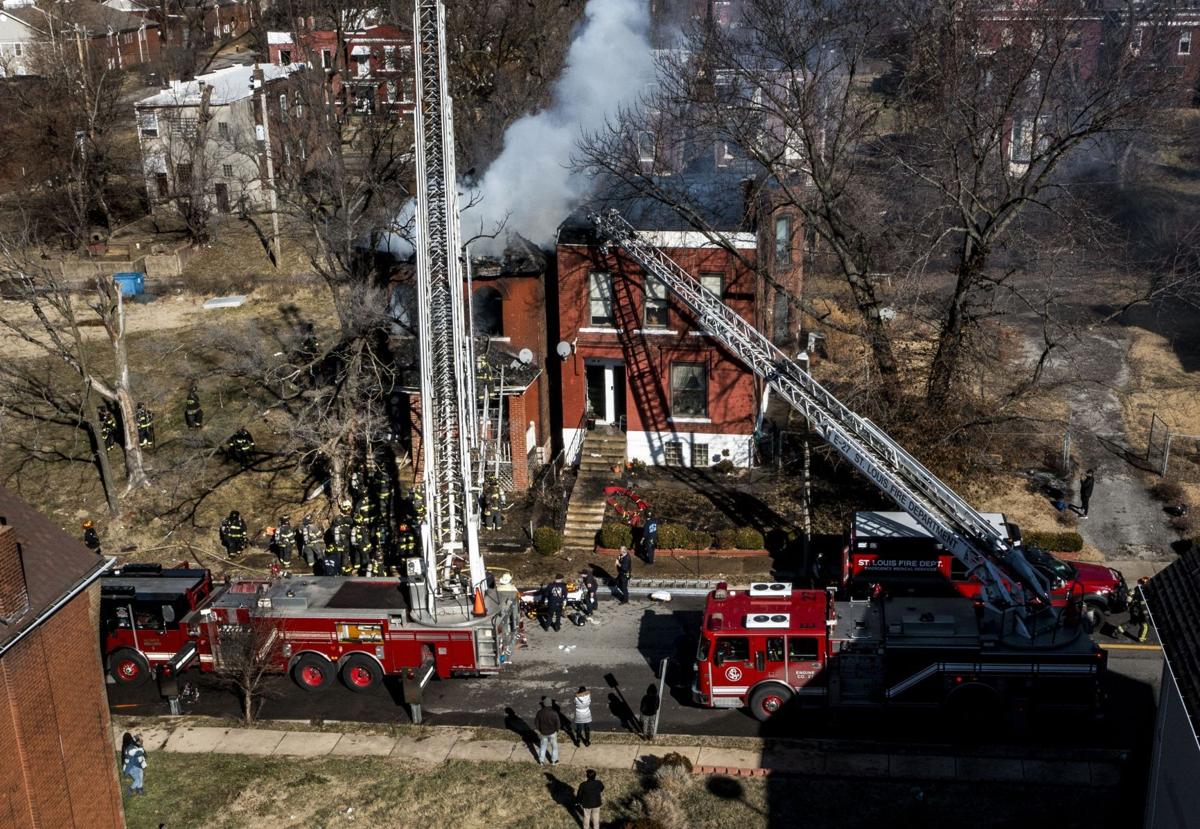 Smoke billows from the roof as firefighters gather near the entrance to transport their dead coworker from the building near the corner of Hodiamont Avenue and Cote Brilliante Avenue in St. Louis on Thursday, Jan. 13, 2022. One firefighter was killed and another injured after the roof of the structure collapsed on fire crews searching the building. Photo by Colter Peterson, cpeterson@post-dispatch.com 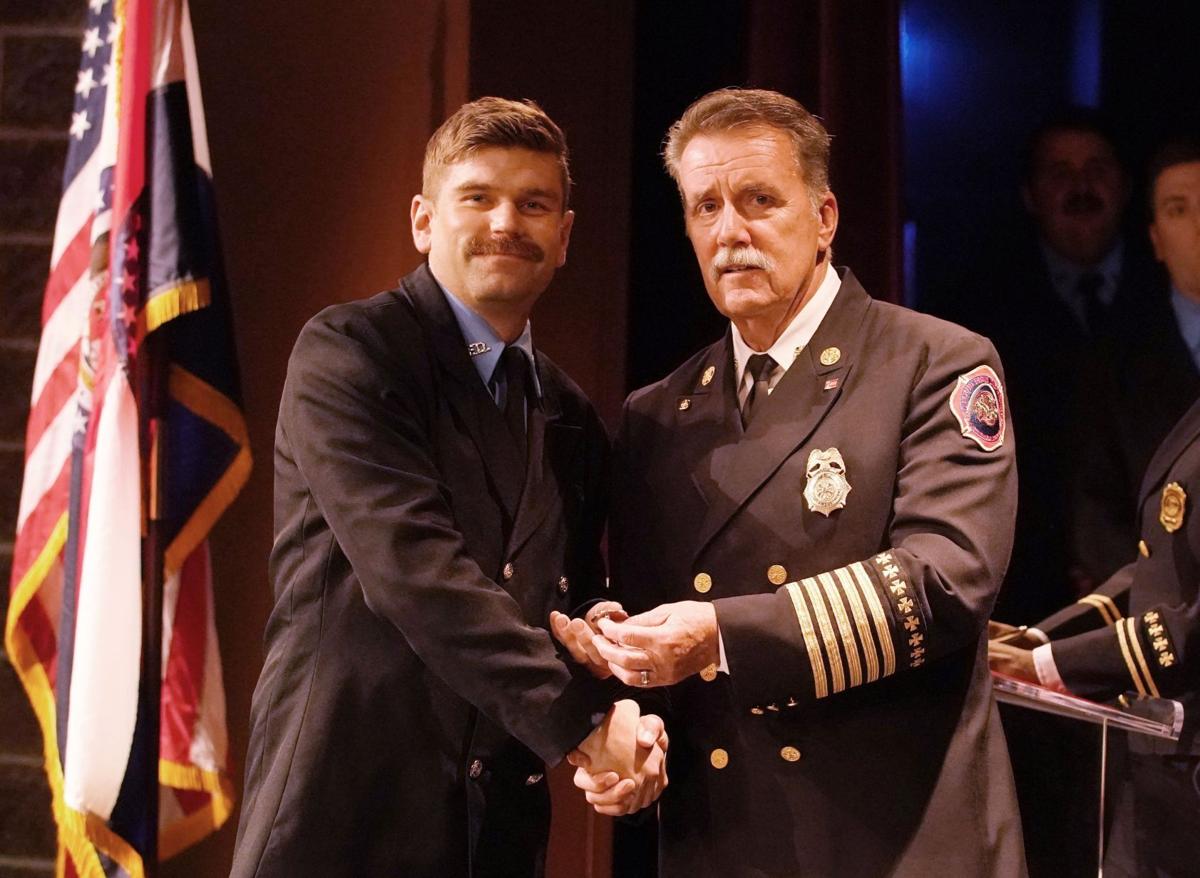 It was a day late.

On Thursday, the home caught fire and collapsed with a St. Louis firefighter inside, killing him. Benjamin Polson, 33, was the first on the force to die fighting a fire in two decades.

All indications are the 126-year-old brick home should have been demolished long ago, or at least made it onto the city’s demolition list, officials agree. City inspectors visited the property dozens of times, levied more than $4,000 in vacant building and board-up fees and, finally, three years ago, condemned it.

But St. Louis has 10,000 vacant properties, dotting block after block in north St. Louis and has demolished fewer than 2,000 over the past five years. And that leaves those still standing an ever-present danger for first responders — who can never assume “vacant” means no one’s inside.

“You can dot your I’s and cross your T’s, and at the end of the day, there still can be tragedy,” said fire Capt. Garon Mosby, a department spokesman.

Officials have wrestled with empty buildings, especially on St. Louis’ north side, for decades. On one hand, the 100-year-old brick manors represent the history of the city itself, and officials fight to keep them standing. On the other, police say the houses harbor drug use, prostitution and crime. They’re magnets for the homeless trying to stay warm. And the city often gets stuck boarding windows, cutting grass and catching vermin.

“We made progress, with hundreds of buildings down,” former Mayor Lyda Krewson told the Post-Dispatch in a text on Friday. “And there is much more to do.”

Only one city neighborhood has more vacant property than Wells-Goodfellow, where Polson died. Wells-Goodfellow has seen the most publicly funded demolitions, 309, since 2017. Empty lots now pock street after street there.

The troubled history of 5971 Cote Brilliante, built in 1895 on the far southwestern edge of Wells-Goodfellow, is spelled out in city records.

The home was marked vacant by the St. Louis Forestry Division in 2004.

City staff visited dozens of times to cut grass, chase rats away and board up windows and doors. Over the years, more than a dozen separate charges were sent to owners, $108 apiece, for mowing. Those, plus vacant building fees, totaled $4,283 — and that’s not including unpaid property taxes.

It was placed on the city’s official registry of vacant properties in 2017.

On June 24, 2019, the city sent a condemnation letter to the house’s owners, listed in records as Lillian Ashford and Bertha Robinson, at a post office box in Fordyce, Arkansas. Three more notices followed.

In September last year, with fees piling up and the owners unresponsive, the city sent the case to housing court.

At this point, the home could have been tagged for demolition. But the condemnation paperwork never made it to the city’s development agency, said Laura Ginn, vacancy strategist at the St. Louis Development Corp.

On Thursday, the city condemned the home for a second time and sent a new letter to Ashford and Robinson, this time informing the owners that the building now posed “imminent danger.”

“Roof is fire damaged,” the letter said. “Walls are collapsed.”

Most of the residents on Cote Brilliante have owned their homes for decades and passed them down to family members, said Katesha Carter, whose grandmother lives on the block.

She said neighbors had reached out to Ashford and Robinson, hoping they might take care of the house.

“It should have been torn down,” Carter said on Thursday. “It was already kind of in shambles when they were living in it. If no one is there to fix it up or even live in it, then why is it still standing?”

On Friday, the city demolished the building. By that afternoon, it was just a pile of debris, and the street was largely empty, outside of a few people sorting through the rubble, stacking bricks.

It’s impossible to demolish all of the unsafe buildings in the city, today, said Ginn, the vacancy strategist.

But a middle ground is owners — and the city — taking better care of the buildings, she said.

“If we invested in improving property conditions, and keeping structures water and airtight,” she said, “we will reduce the risk to firefighters when a fire does happen.”

Katie Kull and Taylor Tiamoyo Harris, of the Post-Dispatch, contributed to this report.

‘You wouldn't believe some of the awful things that have happened.’

Smoke billows from the roof as firefighters gather near the entrance to transport their dead coworker from the building near the corner of Hodiamont Avenue and Cote Brilliante Avenue in St. Louis on Thursday, Jan. 13, 2022. One firefighter was killed and another injured after the roof of the structure collapsed on fire crews searching the building. Photo by Colter Peterson, cpeterson@post-dispatch.com