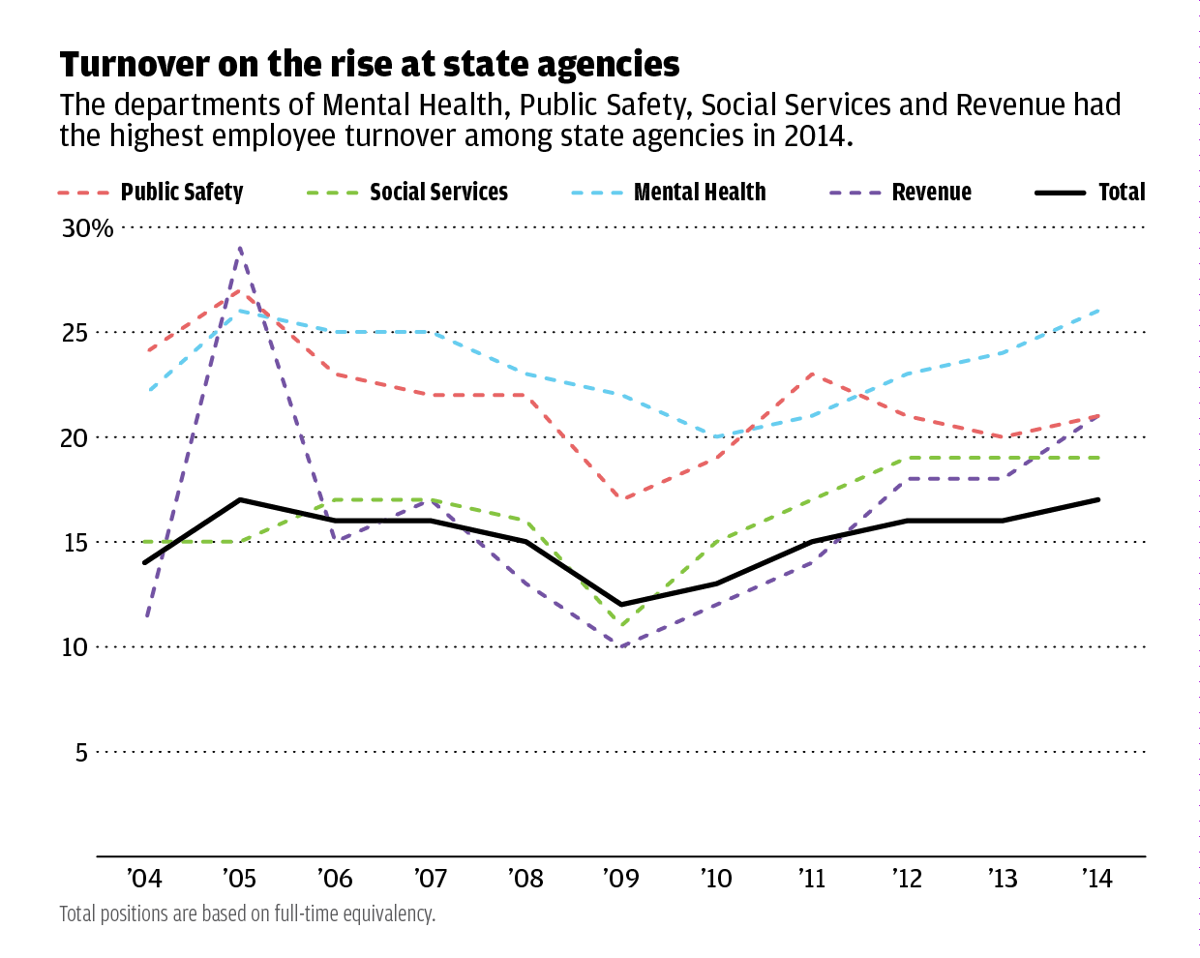 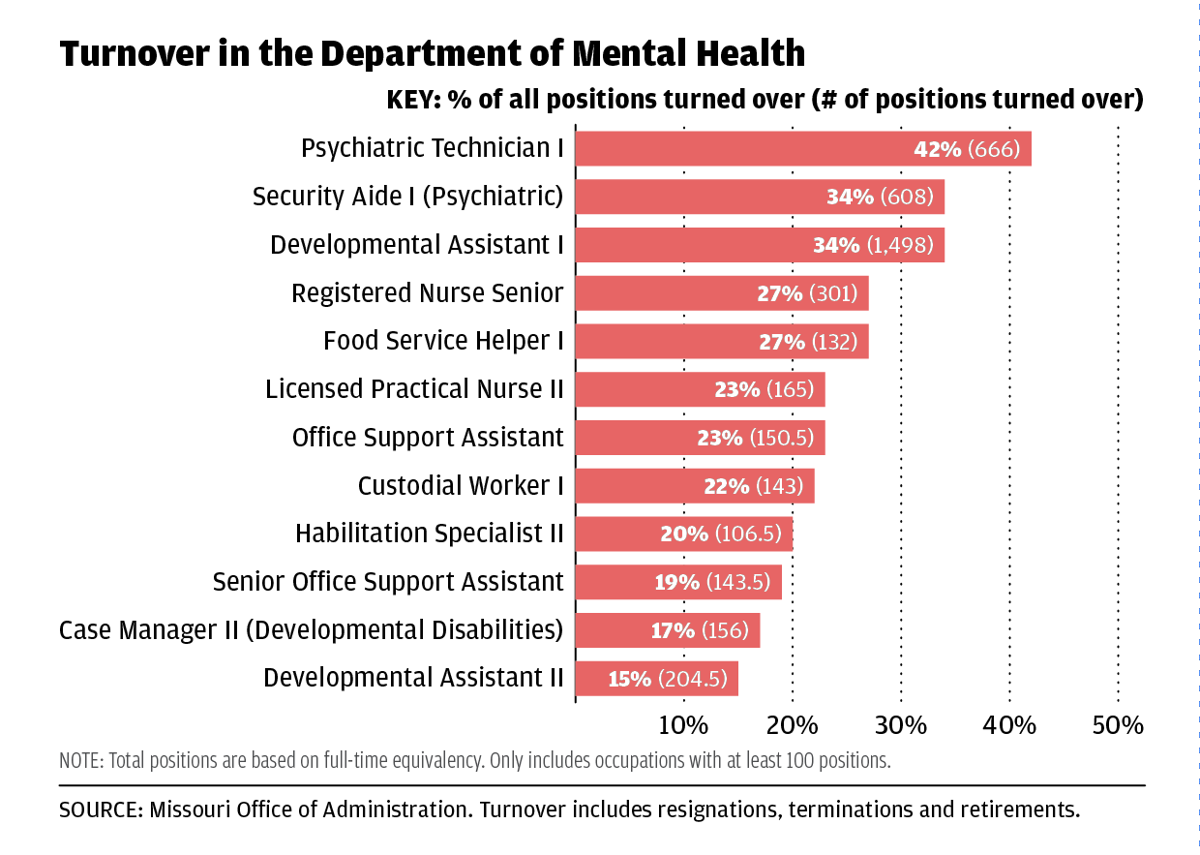 When more people quit their jobs, economists view that as a good thing. It’s a sign of an improving job market when people can put in their two weeks to move on to a better gig.

That in turn puts pressure on employers to raise wages to hold on to workers. But what happens when you’re a huge employer with a tight budget and you don’t want to raise pay?

Welcome to Missouri government, where some of the lowest-paid state employees in the nation are leaving their jobs at the highest rate since 2005, a year when hundreds of state workers lost or quit their jobs amid a budget shortfall.

Last year, the turnover rate for the more than 46,000 positions (based on full-time equivalency) at executive branch agencies reached 17 percent. That was up from a recessionary low of 12 percent in 2009.

Those figures are for permanent positions that are at least half time. They exclude nonexecutive agencies, such as the judiciary, Legislature and attorney general offices, which have an additional 5,100 positions. Some of those who changed jobs are still in state government, however, having left one agency for another.

Voluntary turnover, which excludes terminations and retirements, reached 11.1 percent, the highest it’s been for at least a decade.

“That is not surprising,” said Sally Selden, a professor at Lynchburg College in Virginia who studies turnover in state governments. Many states are struggling with turnover, though she noted Missouri’s voluntary turnover rate was higher than she has seen elsewhere.

Following several years in which employees were given no raises or meager increases, workers received a 1 percent raise starting Jan 1. A proposed budget for next year that passed the House earlier this month did not include pay raises.

“If you can’t compensate people,” Selden said, “you have to make the employee relations aspect so positive that it offsets (pay).”

That’s easier said than done, especially for agencies that have downsized and been asked to do more with less.

Turnover rates vary widely across departments, and are highest in agencies with large numbers of low-paid workers who deal with challenging circumstances, such as the departments of social services, public safety and mental health — which had a 26 percent turnover rate, the highest of any agency.

Bradley Harmon, president of Communications Workers Local 6355, which represents state social services and health workers, said that the tough nature of many of the jobs — such as for those that involve working with abused children — will result in high turnover, regardless of pay.

But, he added, “the fact that a children’s services worker makes the same as an assistant manager at a QuikTrip doesn’t help.”

The turnover rate for the more than 1,400 children’s service worker positions last year was 28 percent. For entry level service workers, who are typically paid about $15 an hour, voluntary turnover was 36 percent.

“You’ve got a smaller number of state employees, but it’s not as if the demand for social services goes down,” Harmon said. The resulting increased workloads produce stress and burnout, he said, which leads to departures, which increase caseloads for remaining employees, and so on.

A spokeswoman for the Department of Social Services said the agency was taking steps to ensure workers have manageable caseloads. For instance, the Children’s Division received money for 23 additional service workers as well as funding to give more cases to foster care management contractors. To ease data entry, many staff members will be given iPads.

Additionally, service workers and supervisors who have been employed for 18 months can now receive “one-step within grade” pay raises if they receive high performance reviews. Two additional children’s service worker classes were added to create more opportunities for advancement.

In August, Dakota Black-Underwood, 24, was hired as a developmental assistant in Nevada, Mo., where he worked with developmentally delayed adults for around $10 an hour.

He didn’t last long. Neither did the other 13 assistants who started around the same time he did. When he left in January, he said, only five remained.

It was tough work, but he found it rewarding. Even though he was occasionally hit or kicked by clients, he was able to build relationships with them. Initially, he said, “I loved the job.”

Pretty quickly though, the low pay and mandatory overtime wore him down. Because of vacancies, he said, supervisors frequently required assistants to work overtime at the end of a shift. He and another former assistant in the office said employees were allowed to refuse overtime only three times a year.

“They were always short-staffed and forcing people to work,” Black-Underwood said. He left for a job laying fiber optic cable. Of nearly 1,500 “Developmental Assistant I” positions in the department, the turnover rate last year was 34 percent, up from 28 percent in 2013.

A department spokeswoman said the agency had retention and recruitment challenges in several areas, and acknowledged that high numbers of vacancies can lead to high levels of overtime, which then contributes to burnout and turnover.

The department gave registered nurses a 3 percent pay raise in January, but it acknowledged that pay was still probably less than what nurses can earn outside of state government. For critical need positions, the agency also offers tuition reimbursement to employees — when funding is available.

Earlier this year, Missouri lawmakers rejected raises for themselves, with many arguing a pay bump was inappropriate considering how few raises state workers have received.

The most recent Census estimates, from 2013, put Missouri employees as the second-lowest paid state workers in the nation, ahead of only Mississippi.

State Sen. Mike Kehoe, R-Jefferson City, said the 1 percent pay raise given to employees this year “is kind of like using a garden hose on a fire.”

Kehoe, who has thousands of state workers in his district, was on a committee created to study state compensation in 2012.

He said that because the state hasn’t done a compensation study since 1983, it’s unclear how total compensation packages — including vacation, health care and pension — stack up against other states. He’s heard other lawmakers tout the state’s overall benefits as being among the best available, but he doubts that’s the case.

He indicated that better data could create a more compelling case that the issue needs addressing.

Ultimately, “we’re not competitive,” he said. “And we face another year where (Gov. Jay Nixon) did not include a raise for state employees in the budget.”

“In the governor’s defense,” he added, “I understand the budget is tight.”

Until the Legislature and governor’s office come up with a long-term compensation plan that focuses on everything from pay to training to efficiency, Kehoe said, turnover will remain a problem.

Republicans say departments need to rein in spending that grows every year.

But there are plenty of opportunities to work more hours.