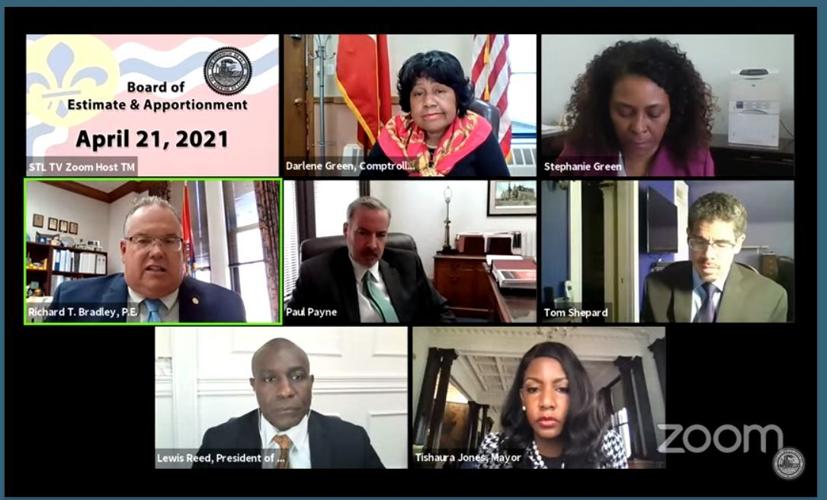 The St. Louis Board of Estimate, made up of the mayor, comptroller and aldermanic president, met Wednesday, April 21, 2021, online. It was the first estimate board meeting for Mayor Tishaura Jones. (screengrab) 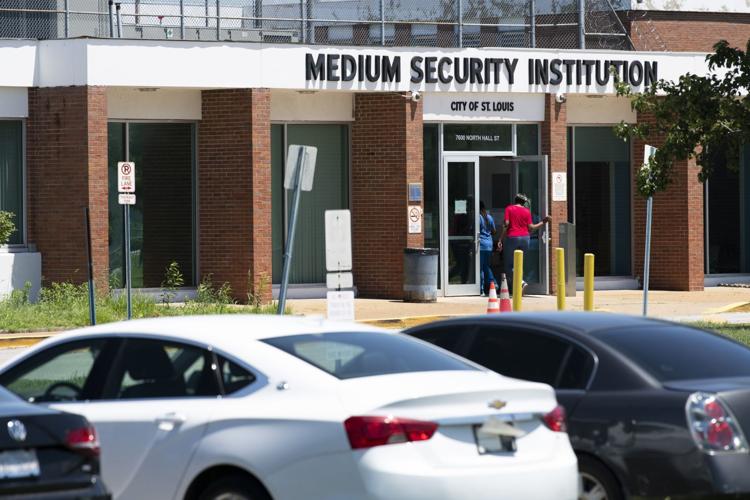 ST. LOUIS — On her first full day in office, Mayor Tishaura Jones took a step Wednesday toward fulfilling one of her campaign promises — closing the Medium Security Institution, the city jail commonly known as the workhouse.

City budget officials, at Jones’ request, included no money to run the workhouse in a $1.15 billion spending plan they submitted for the fiscal year beginning July 1.

The proposal, which was outlined before the city Board of Estimate and Apportionment, includes money to house some city inmates in rented detention space in other jurisdictions.

That would handle detainees for whom there is no room in the main city jail downtown. No indication was given Wednesday where those cells would be.

Jones issued a prepared statement reiterating her concerns about what she called “inhumane conditions” at the workhouse.

“The injustice caused by these dehumanizing conditions are compounded by the fact that most city detainees have not been convicted of any crime, with an average length of stay running longer than 300 days,” she added.

She said closing the facility is part of her plan to shift the city from “our expensive arrest and incarcerate” public safety model to one “addressing the root causes of violent crime.”

Her predecessor, former Mayor Lyda Krewson, had said complaints about the workhouse were out of date and that the facility had undergone significant improvements in recent years.

However, Krewson under aldermanic pressure had begun the process of gradually closing the complex.

A July 1 shutdown, if approved by the estimate board and Board of Aldermen, would adhere to Jones’ previously announced intention of closing the facility in her first 100 days in office.

Jones in her statement Wednesday said the city would save about $7.8 million by closing the workhouse.

She wants to use $1.3 million of that on a new city Division of Supportive Reentry that would fund social workers, mental health services, child care and other services aimed at helping detainees return to society.

Aldermen last year approved forming such an agency but it has yet to be funded.

In addition, she said, $300,000 of the savings would be used to double the budget for a city oversight panel on the main jail downtown that was formed by Krewson after riots and disturbances there in recent months.

Aldermen are expected to consider legislation to make the panel permanent.

The money, Jones said, would be used “to increase the capacity of correctional investigators looking into acts of retaliation and neglect” within city jails.

While the proposed budget doesn’t state specifically that the workhouse would close July 1, mayoral spokesman Nick Dunne said that is Jones’ intention.

Mary Goodman, legislative director for Aldermanic President Lewis Reed, said Reed has not been informed of any specifics. “There needs to be a responsible plan in place,” Goodman said.

Reed serves on the estimate board with Jones, the chairwoman, and Comptroller Darlene Green.

In January, Krewson told Reed and Green at a meeting of the board that the only available cells that corrections officials could find were in rural counties in south central Missouri and Kentucky.

Krewson said then that while talks with officials in Simpson County, Kentucky, were underway, her administration believed that the workhouse was a better option for most inmates.

Earlier, she had cited expensive transportation costs and had said access would be difficult for family members and attorneys for detainees.

Budget Director Paul Payne, in his presentation on the overall budget to the estimate board, said it includes $1.4 million to house city inmates in jails in other locales. The closure of the workhouse will allow for a net cut of 90 vacant corrections positions, he said.

Payne also said $150,000 is allocated to city planners to study potential new uses for the workhouse.

• The estimate board approved shifting $5.5 million in the current year’s budget to continue repairing the malfunctioning locking system at the main jail and damage from the riots, bringing the total to $7 million.

• Jones added Nahuel Fefer, an aide to Francis Slay when he was mayor, to her staff.

Fefer, who more recently was a fellow with ArchCity Defenders — a part of the activist campaign to close the workhouse — will be Jones’ director of policy and development in the mayor’s office. Fefer also served on Jones’ transition team.

Meanwhile, Jones said she is putting together a committee of “about 20 people or so from the community” to prepare a plan to spend the $517 million the city expects to get from the pandemic aid bill passed recently by Congress.

She asked Green or a Green designee to be part of the committee. Jones, who has outlined her own priorities for the money, also has asked the general public to weigh in via a link on her transition website.

Payne said the proposed city budget already includes $17 million from the federal outlay to help “get us over the hump” until tax revenues rebound to a point closer to pre-pandemic levels.

He suggested that the city focus the remainder on capital needs and other nonrecurring expenditures so the city isn’t left with ongoing commitments it would have to fund out of its regular revenue.

Payne said predictions of big pandemic-related declines in city tax revenue had come to pass although the respective drops of 4% and 8% in earnings tax and payroll tax receipts so far this fiscal year were not as steep as feared.

Restaurant and hotel taxes have dropped by 49% and 73%, respectively, he said.

But he said spending cuts implemented a year ago, such as a partial hiring freeze and a deferral of many capital projects, has helped avoid the need for major reductions this year.

The St. Louis Board of Estimate, made up of the mayor, comptroller and aldermanic president, met Wednesday, April 21, 2021, online. It was the first estimate board meeting for Mayor Tishaura Jones. (screengrab)