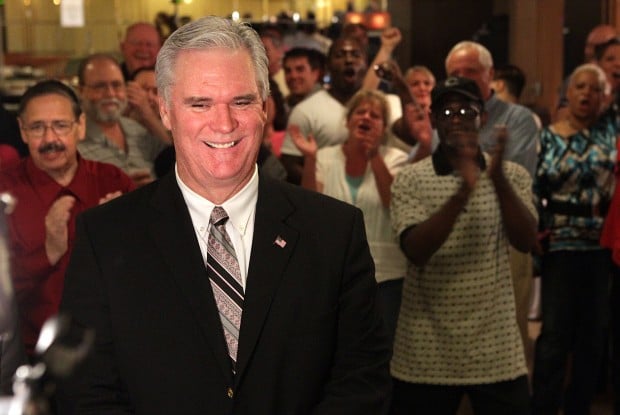 Brad Harriman, then a Democratic candidate for Illinois' 12th Congressional district, speaks to the media at his primary victory party on Tuesday, March 20, 2012. Photo by Christian Gooden, cgooden@post-dispatch.com 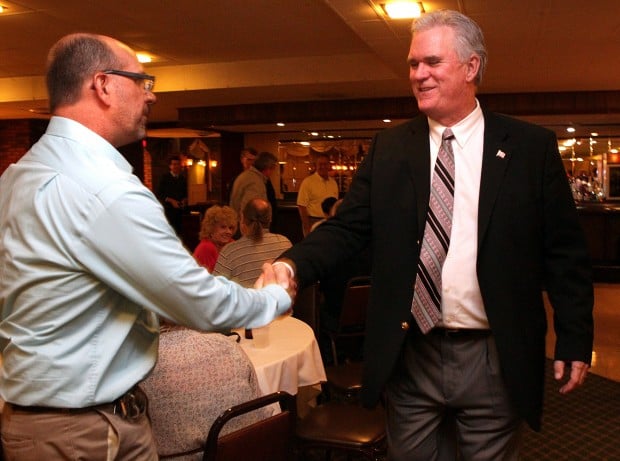 ST. LOUIS • Democrat Brad Harriman, a former college football player who used his coaching career as a springboard to run for political office, unexpectedly dropped out of the race for Illinois' 12th District congressional seat on Tuesday, citing a previously undisclosed nerve disorder.

Primary voters selected Harriman in March as his party's nominee to replace U.S. Rep. Jerry Costello, D-Belleville, who is retiring after more than two decades in Washington. Harriman's abrupt departure means that the November ballot in the Metro East area will feature two contenders for the U.S. House who did not have to weather a primary.

Harriman's exit is for different reasons — Johnson cited family concerns — but came as just as much of a surprise. Now, party leaders will now have to scramble to nominate a replacement, a role that typically falls to voters.

In a statement, Harriman, 58, referred to his ailment only as a "neurological condition." He said he has lived with the condition "without limitation or noticeable change" since 2010, but that it began to worsen under the demands of running for office. If he continued with the campaign, Harriman said, he was facing "irreparable damage."

"I know the rigors that this campaign will demand, and I know that my health will prevent me from running the kind of campaign that Southern Illinoisans should expect," Harriman stated.

The task of replacing Harriman on the November ballot now falls to a committee of the Democratic Party chairmen in each of the dozen counties covered by the 12th District, the same process that was used to find a substitute for Johnson in the 13th District.

Randolph County Democrat Barb Brown, who had traveled on the campaign trail with Harriman, said it became increasingly clear that his health could keep him from continuing through Election Day.

"He would get back into the vehicle and say, 'Oh, my gosh, my fingers are numb,'" Brown said.

In addition to the long hours, the amount of driving time required to run in a sprawling district like the 12th — which stretches from Alton to the state's southern tip — was too much for a man with Harriman's condition.

"For someone with those injuries, this is the worst possible schedule that you could keep," Brown said.

Brown did not know whether Harriman's condition stemmed from his football career. The 6-foot-5-inch Harriman played football at Belleville East High before finishing his college playing career as an offensive lineman at the University of Missouri at Rolla.

After coaching at Althoff Catholic High in Belleville and teaching at St. Clair County Juvenile Detention Center, Harriman was elected regional superintendent for the county in 2006.

Harriman's departure comes as the race to replace Costello was beginning to capture some national attention. While the district has not elected a Republican in generations, the relative rarity of a congressional race without an incumbent had stirred GOP interest.

Republicans have chosen as their nominee Jason Plummer, 29, a lumber executive who two years ago won the party's nomination for lieutenant governor. In a statement, Plummer said that his "thoughts and prayers go out to Brad and his family as he deals with his medical condition."

"He had a distinguished career as an educator and leader in the area, and I wish him the best," Plummer said.

As far as who Plummer will face in the fall, there appears to be no clear front-runner. The runners-up to Harriman from the March primary offer little hope to Democrats: Harriman captured 70 percent of the vote over two opponents, one of whom was a perennial Costello rival. The other dropped out before the election.

After Harriman's announcement Tuesday, Costello issued a statement of his own, seeking to quickly extinguish any speculation that he could be persuaded to stay on Captiol Hill for a 12th term.

"I announced last October that I will not seek re-election," Costello said. "I am not going to reconsider and will not be a candidate for re-election."

That doesn't necessarily mean that the Costello name won't be on the ballot. His son, Jerry Costello II, was tapped last year to fill a vacancy in the state House, and could be an appealing choice to party leaders eager to provide a familiar commodity to voters.

Other possibilities include Ann Callis, the chief circuit court judge in Madison County, and former state Rep. Jay Hoffman of Collinsville, both of whom had previously expressed interest in replacing Costello.

Of the two, Hoffman may be more battle-tested, but he comes with political baggage — he was roommates with former Gov. Rod Blagojevich when both served in the state Legislature, and they remained close when the now-incarcerated Blagojevich was in power.

If anyone has an edge in the process, it may go to a contender from St. Clair County which, because the county had the most primary votes in March, will have the most votes on the committee to replace Harriman.

The panel has not chosen a date to meet, said Brown, of Randolph County, who, along with Rep. Costello, is responsible for convening the committee.

Questions emerged about the timing of Johnson's departure once it was reported that his former chief of staff had, the month before the primary, registered a campaign website apparently aimed at replacing his former boss.

Ultimately, though, Republicans chose another contender, Rodney Davis, an aide to U.S. Rep. John Shimkus, R-Collinsville, to take Johnson's place on the ballot.

If nothing else, Brown said, voters have plenty of time between now and November to get to know the hand-picked Democratic choice to replace Costello.

"I have a lot of confidence in the ability of voters to sort this out on their own," Brown said.

Jason Plummer has been set as the Republican candidate, but Democrats have a question mark.

Democrats: Illinois will be on front lines of battle for control of Congress

The winners of each of the two party primaries will square off in the November general election.

Jerry Costello is leaving office, but what about his campaign fund?

Illinois Rep. Jerry Costello will hang on to considerable influence with $2.3 million in his political funds.

Brad Harriman, then a Democratic candidate for Illinois' 12th Congressional district, speaks to the media at his primary victory party on Tuesday, March 20, 2012. Photo by Christian Gooden, cgooden@post-dispatch.com