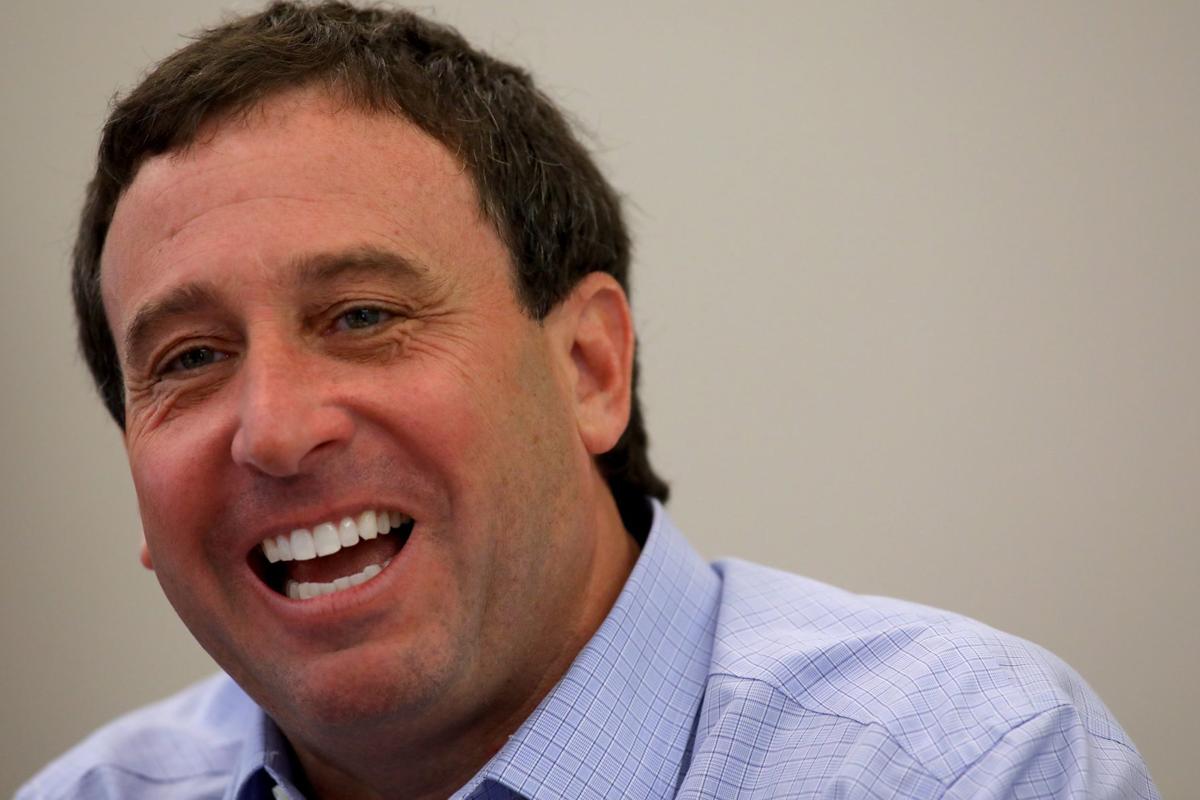 St. Louis County Executive Steve Stenger responds to questions with journalists on Wednesday, July 25, 2018, in the offices of the Post-Dispatch. Photo by Christian Gooden, cgooden@post-dispatch.com 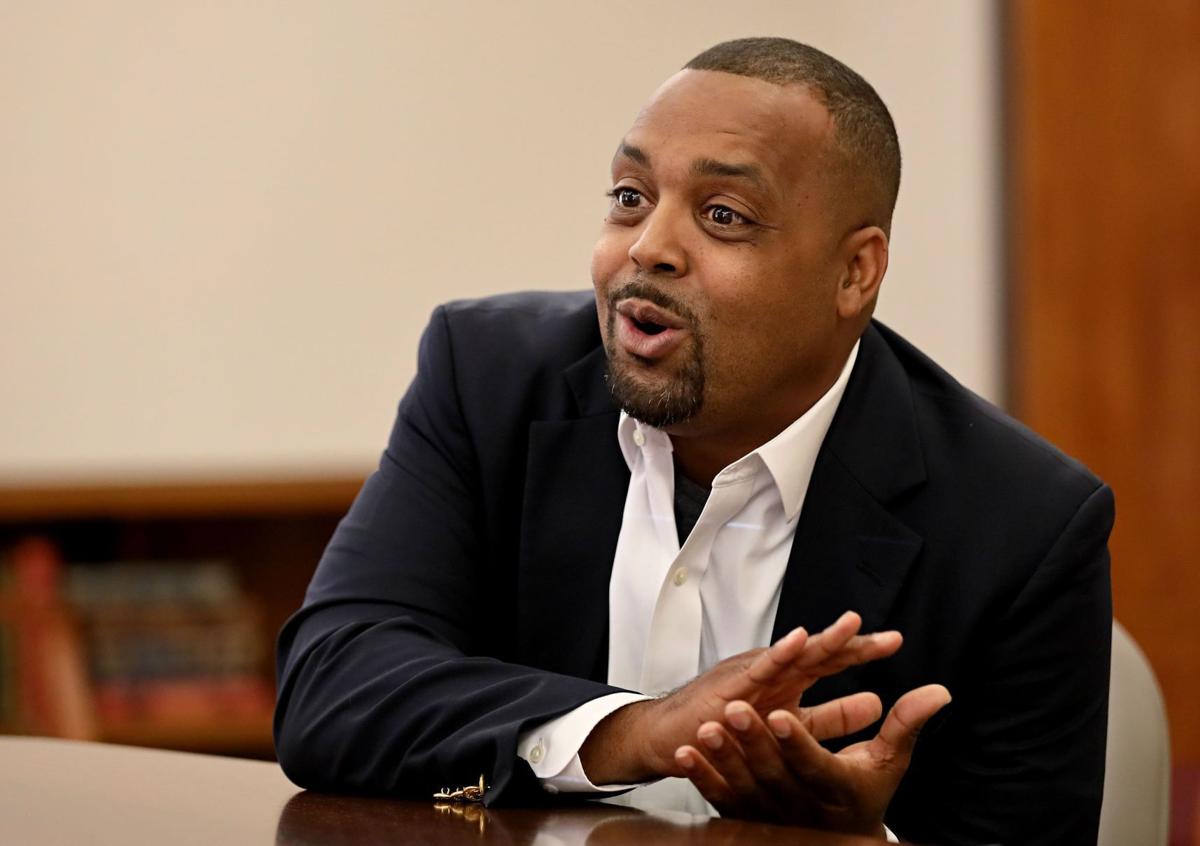 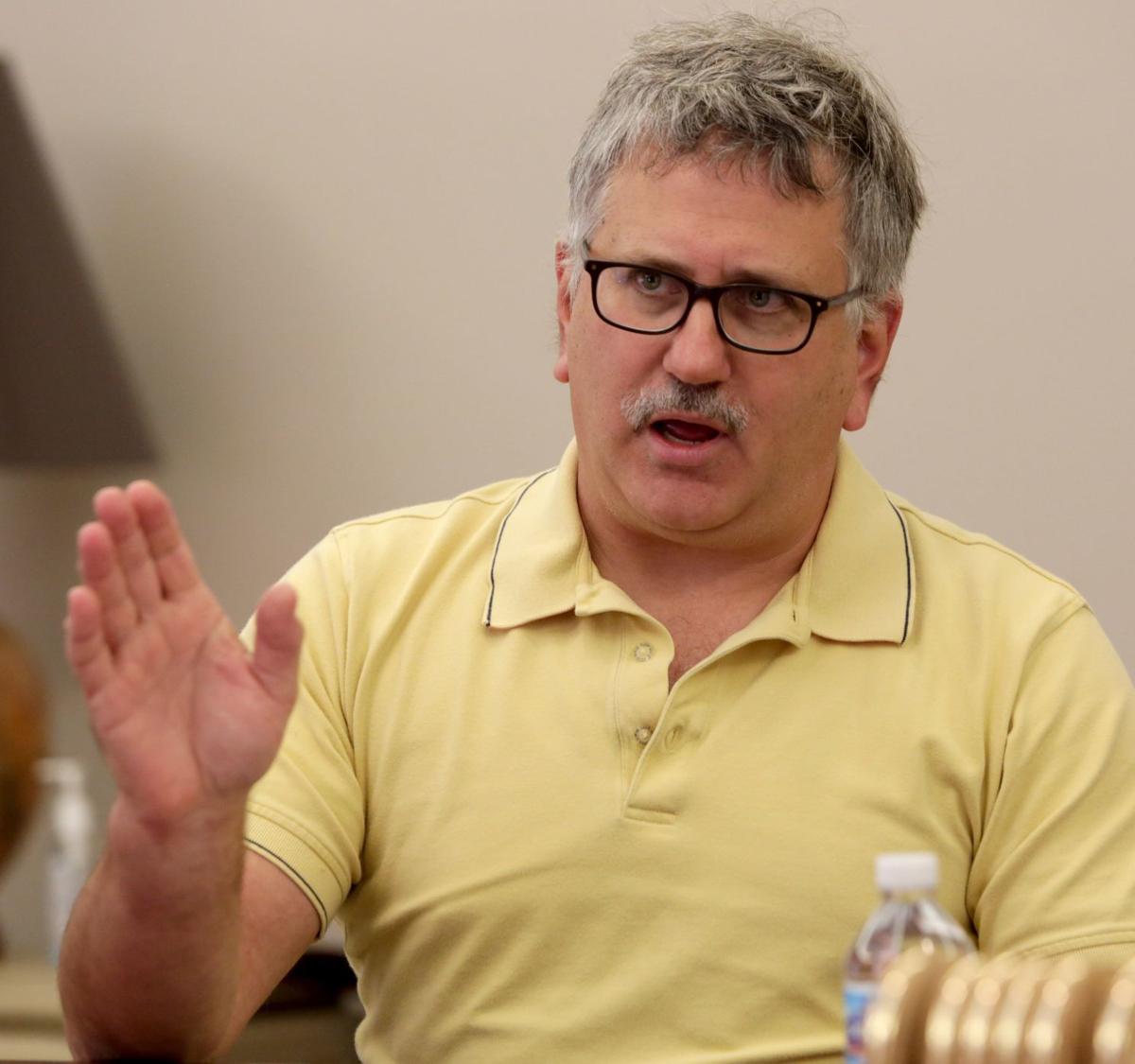 ST. LOUIS COUNTY • Political ads for pivotal races in Missouri and Illinois are crowding St. Louis airwaves, but one important contest has been uncommonly quiet: the race for St. Louis County executive.

Many pundits believed the county executive race was decided in August; that the winner of the Democratic primary would cruise to victory in the general election.

Incumbent Steve Stenger seems to believe it, barely campaigning after his razor-thin victory over deep-pocketed challenger Mark Mantovani in a bruising primary marked by negative campaigning and big spending on both sides.

He’s on a different financial plane than his three challengers. Republican Paul Berry III, a bail bondsman who has hosted a political TV show, had spent $12,600 on the entire election and had less than $1,000 at the end of September. He received a $30,000 contribution Oct. 19, campaign finance records show. Libertarian Nick Kasoff, an IT consultant and rental property owner in Ferguson, has raised less than $500. Andrew Ostrowski, from the Constitution Party, did not submit campaign finance reports to the Missouri Ethics Commission.

Stenger declined to meet with Post-Dispatch journalists to discuss the November election. A campaign official noted that Stenger had already sat for a lengthy interview before the primary and saw no benefit to doing it again.

Any Republican candidate for a St. Louis County race in a general election could expect about a third of voters to select a straight GOP ticket, said E. Terrence Jones, a professor emeritus in the political science department at the University of Missouri-St. Louis, a veteran politics watcher.

To have a chance, Berry would have to add significantly to that base and hope the independent candidates divert voters from Stenger.

Although the county leans strongly Democratic, the GOP has shown it can compete. Stenger beat Rick Stream for county executive in 2014 by less than a point, with neither candidate capturing a majority. Stream did not concede the race until after Christmas. But Stream was an experienced politician with wide support in his party. He raked in $173,000 in donations in September 2014, riding a red wave.

Berry has no such party support, no such wave, Jones said. The Republican Central Committee of St. Louis County endorsed Berry but gave him just $2,000.

“You’ve got to be able to go out and raise your own money in this county,” said the former chairman, Bruce Buwalda.

Berry lacks influential backers among area elected officials. No members of the County Council have endorsed a candidate, despite their abysmal relationship with Stenger. Berry emphasized that he has appeared at events with officials including Missouri Gov. Mike Parson and U.S. Rep. Ann Wagner but had not sought their endorsements because they would not help him in north St. Louis County.

“Berry’s party has abandoned him,” Jones said. “The odds of pulling this off are in the one-in-50 range.”

UMSL political science professor Dave Robertson said Stenger appeared to have several advantages. A generic Democrat in an average countywide race could expect a six- to eight-point advantage. And Kasoff and Ostrowski lean conservative, meaning they may be more likely to siphon votes away from Berry than from Stenger.

Berry, who did not graduate from college and has struck a populist tone in the style of President Donald Trump, is not likely to fare well in areas that went for Mantovani, Robertson said. People in the central corridor are “a group that by and large is predisposed to vote Democratic, and is going to be largely for Claire McCaskill in the U.S. Senate race,” he said. “They might express dissatisfaction with Stenger by not voting for anyone for county executive, but I doubt if they will vote for a Republican candidate.”

Stenger has pointed to many successes: a diverse cabinet, a prescription drug monitoring program, the county’s AAA bond rating.

Still, all three challengers say they believe Stenger can be beaten. Voters may be weary of his long-running political war with both Democrats and Republicans on the County Council. And he has been dogged by disclosures in the Post-Dispatch that contributors to his campaign enjoy favorable treatment from county government.

Ostrowski, 56, of Maryland Heights, said he thought Mantovani would have won the Democratic primary if Stenger had not called him out for having supported Gov. Eric Greitens.

The three candidates chasing Stenger can make it close because voters are looking for alternatives, he said. Politics isn’t about wooing voters, he said, “it’s about getting them to vote against the other guy.”

Ostrowski, who owns a cleaning services franchise, wants to institute a sales tax to set up an investment fund that would ultimately eliminate property taxes in St. Louis County. He also wants to build high-speed trains along all area interstates.

Berry, 40, the only African-American in the race, believes he will get votes from Democrats who don’t like Stenger, particularly black voters in north St. Louis County. He has published a series of videos attacking Stenger with unsubstantiated allegations of corruption and dishonorable acts. Challenged by journalists to back up his claims, Berry cited unnamed political insiders.

Berry borrows heavily from Trump’s political style. His Facebook posts blast news organizations, including the Post-Dispatch, as “fake news.” He refers to his opponents by sarcastic nicknames. He calls his platform “St. Louis County First.” Among the highlights:

Paul Berry has had financial issues

Kasoff said he wanted to ensure that every county employee was helping improve quality of life. “It doesn’t mean we’re going to fire people, but it may mean that people’s jobs change,” he said. He said the county was doing a “lousy job” on some things, including maintaining county roads and unincorporated neighborhoods.

Berry and Kasoff have jousted online, with Kasoff, a landlord, calling attention to Berry’s history of being evicted from apartments several times for not paying rent.

But they have both blamed Stenger for the cloud hanging over county government, and think they can do better bridging the gap.

St. Louis County Executive Steve Stenger responds to questions with journalists on Wednesday, July 25, 2018, in the offices of the Post-Dispatch. Photo by Christian Gooden, cgooden@post-dispatch.com