Candidates clash on crime, virus in what’s likely Missouri’s only meeting of governor hopefuls
0 comments
Share this
Subscribe for $1 a month
1 of 5 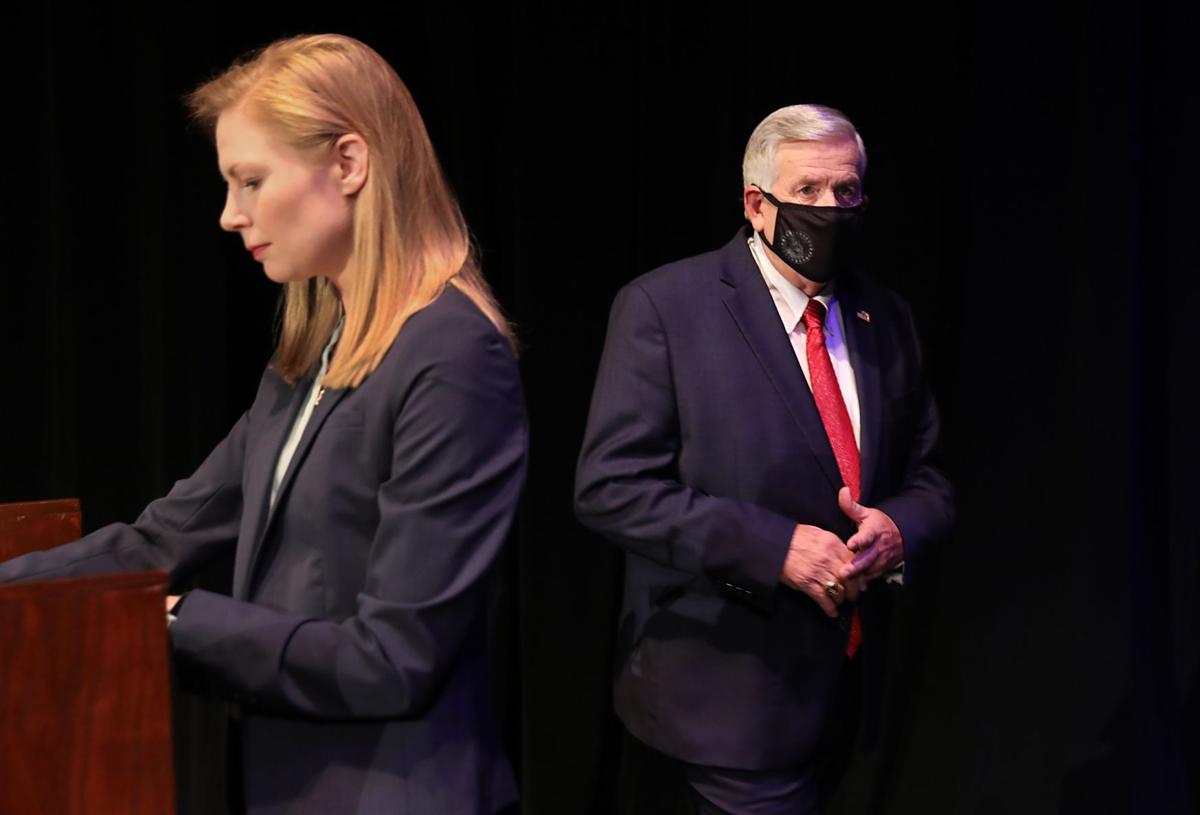 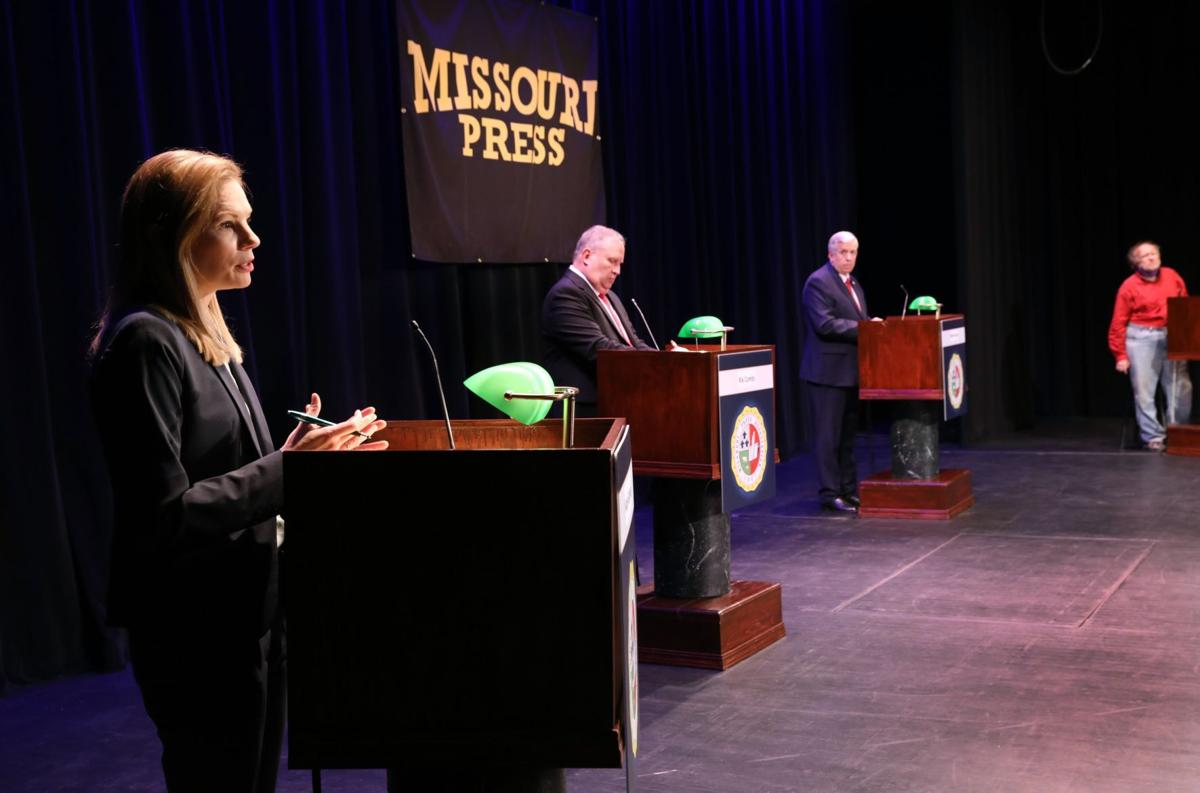 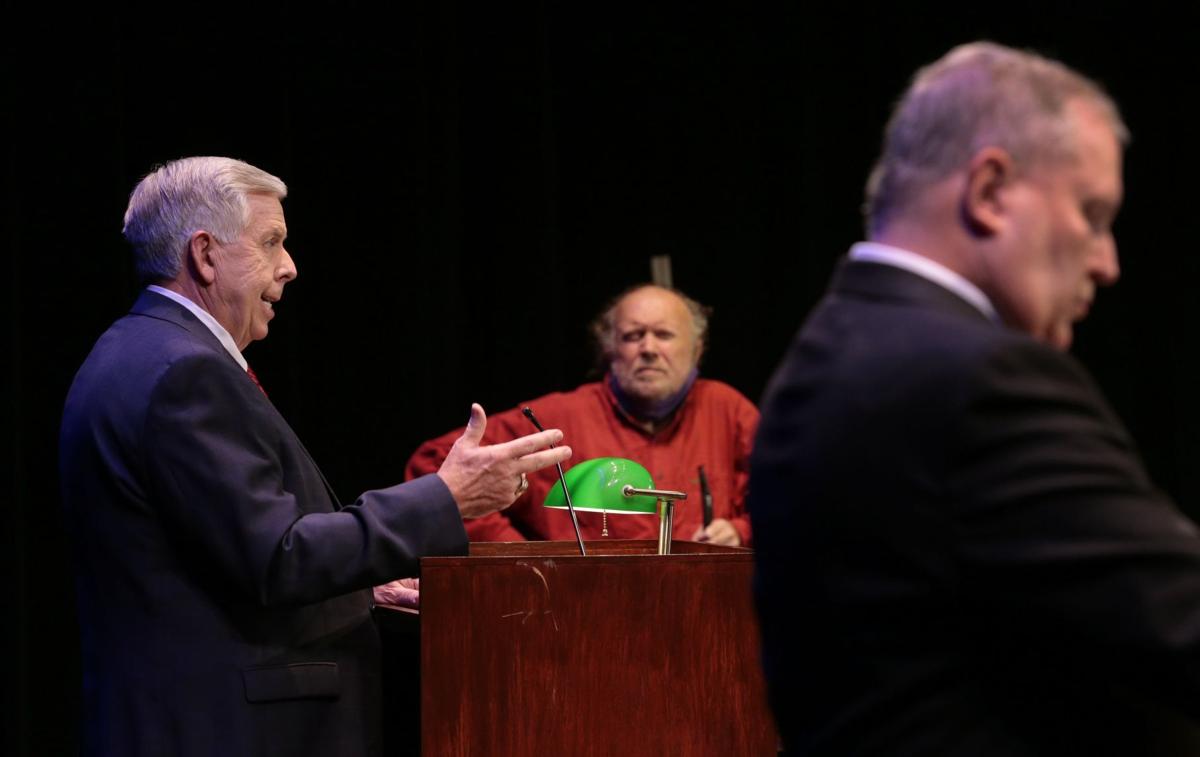 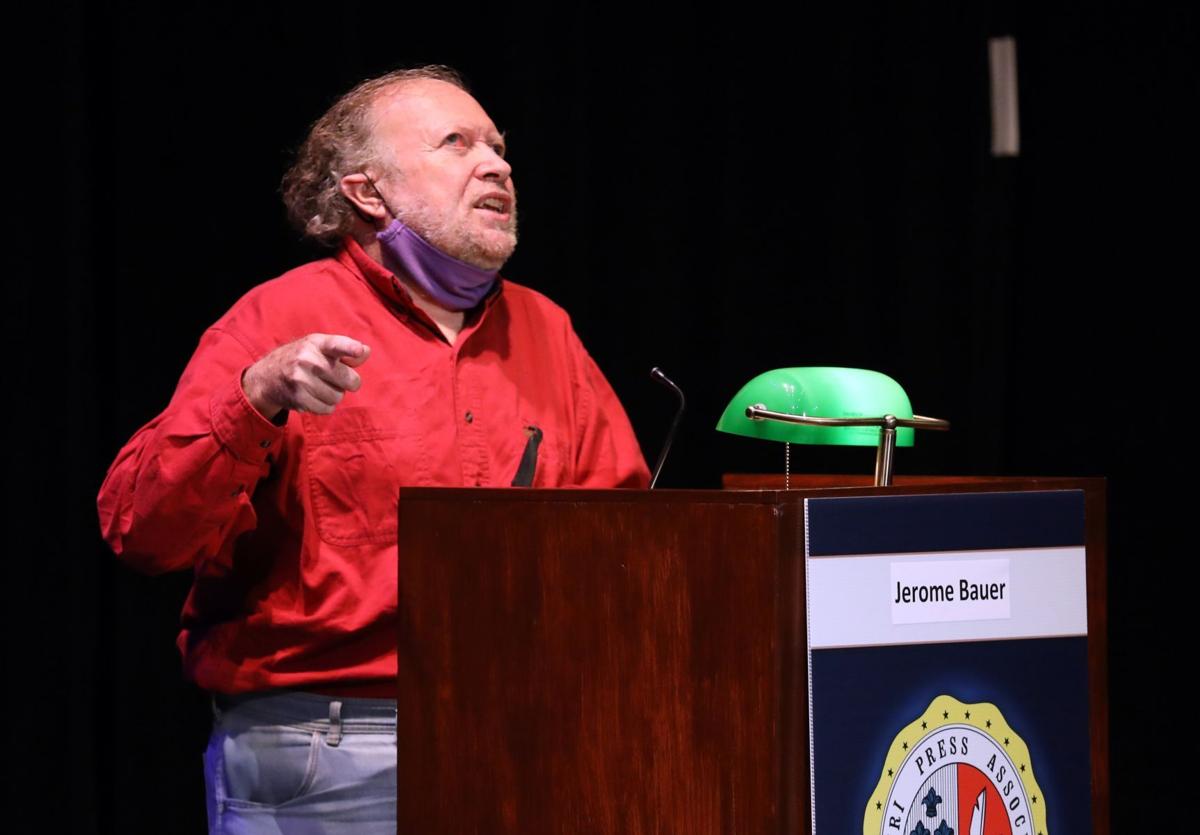 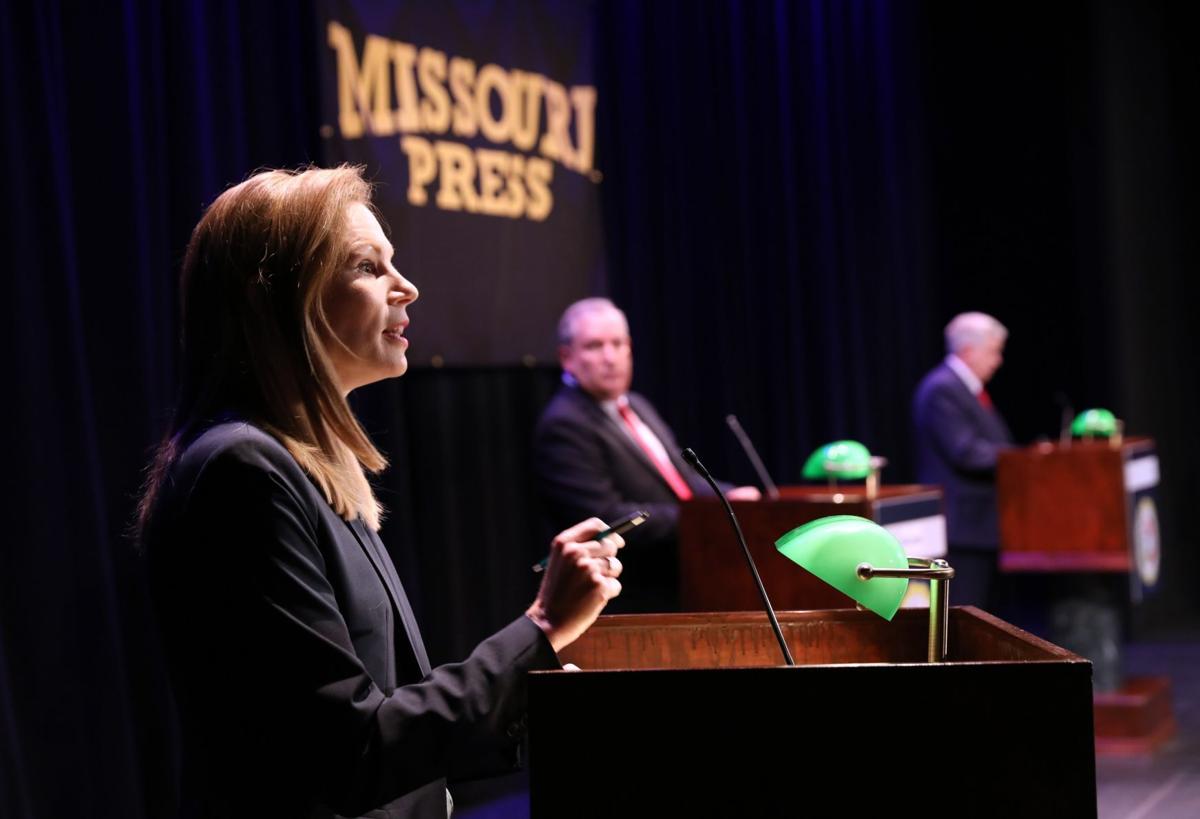 COLUMBIA, Mo. — In what could be the only gubernatorial debate of the 2020 election, Republican Gov. Mike Parson and Democratic State Auditor Nicole Galloway clashed on Friday over COVID-19, crime and health care policies.

Galloway, seeking to upend Parson’s two-year tenure as governor, repeatedly took aim at the incumbent’s policies, saying in closing that Parson was “just in over his head” and had “failed the test of leadership” amid a 25-year high in homicides in St. Louis and more than 2,000 deaths in Missouri attributed to COVID-19.

Parson, meanwhile, defended his response to the pandemic, saying the economy was recovering faster in Missouri than in other states. He said he had consulted with experts and took a “balanced approach” to fighting the disease.

He emphasized his upbringing, which he said was “about work ethic, about Christian values, about moral values.”

And Parson criticized Galloway, attempting to tie her to a movement to “defund the police,” an assertion she rejected.

The debate, sponsored by the Missouri Press Association in Columbia, was rescheduled after Parson tested positive for COVID-19 on Sept. 23.

While Bauer advocated for a universal basic income and shifting police resources to other initiatives, Combs focused his message on unleashing free enterprise and rejecting machine politics.

After the debate, Parson mingled with the two third-party candidates while Galloway stood behind her podium. After Galloway began moving around the stage, he left without speaking to the auditor.

On COVID-19, Galloway said, “He (Parson) mentions working every day but what he’s doing every day isn’t working, because we continue to be in a red zone. We have to take action and act urgently to contain the spread of this virus so we can get our economy open again, we can get our schools open again.”

Parson noted Missouri’s unemployment rate had fallen to 7%, down from 10.2% in April, according to the U.S. Bureau of Labor Statistics.

Galloway said that to jump-start the economy, the state first needed to get control of the pandemic.

She said she’d be “much more engaged in deploying” federal aid provided through the Coronavirus, Aid, Relief and Economic Security Act “to help our local communities, to help small businesses, to help those that have lost their job.”

Galloway noted that initial unemployment claims in Missouri ticked up last week, and said “we continue to slide backwards.”

Galloway said she had a plan to address the “root causes” of crime and said Parson rejected a call for a special session last year by Black lawmakers to address violent crime.

She said Parson “struck out” during a special legislative session this summer on “law and order,” when GOP lawmakers nixed a majority of his proposals.

The governor did sign legislation removing for three years St. Louis’ residency requirement for first responders, and signed another proposal that creates a witness protection fund, though the initiative currently lacks funding.

“We didn’t strike out at all,” Parson said.

Galloway said she didn’t support defunding the police, and noted that Parson restricted $1.8 million from the Missouri Highway Patrol in July amid lagging tax collection projections.

Of that total, more than $700,000 was to go to enforcement efforts, and $825,000 was earmarked for fringe benefits. Another $200,000 was budgeted for vehicle purchases, and $43,000 was for the patrol’s academy, according to governor’s office budget documents.

“I don’t know what she’s talking about on cutting the budget on that,” Parson said.

Galloway said Parson’s campaign apparatus had engaged in “racially divisive” tactics, referencing a website by Parson’s Uniting Missouri PAC labeling Galloway “pro-crime” and juxtaposing her picture next to three Black politicians; two of those figures were active in protests over the summer.

Galloway noted Parson’s 15 years in state government, which started when he was elected state representative in 2004.

“He wants to point the finger at everyone else instead of taking responsibility for his own actions,” Galloway said.

Parson criticized Galloway for a recent audit in which she faulted the St. Louis Police Department for not adequately monitoring overtime costs. Galloway said he misunderstood the point of the audit, which was requested by the city of St. Louis.

On police reform, Parson noted a recent decision by his administration’s Peace Officer Standards and Training, or POST, Commission, to require implicit bias and de-escalation training for officers each year.

Galloway said she would not support Amendment 3, the question on the Nov. 3 ballot that would repeal parts of a 2018 ballot measure known as “Clean Missouri.”

Parson said he would vote “yes” on Amendment 3, which would shift legislative redistricting responsibilities from a nonpartisan demographer to a bipartisan commission while introducing first-of-its kind criteria into the redistricting process, such as not including children when configuring legislative districts.

Galloway said she supported expanding Medicaid, and said the expansion “can be implemented in a fiscally responsible way.”

“Governor Parson has a terrible record on health care,” she said, noting a decline in the Medicaid rolls during Parson’s administration and a lawsuit by the Missouri attorney general seeking to strike down the Affordable Care Act, which authorizes Medicaid expansion.

“The people voted for it. We’re going to put it in place,” Parson said of Medicaid expansion.

Road to victory in the 2020 presidential election