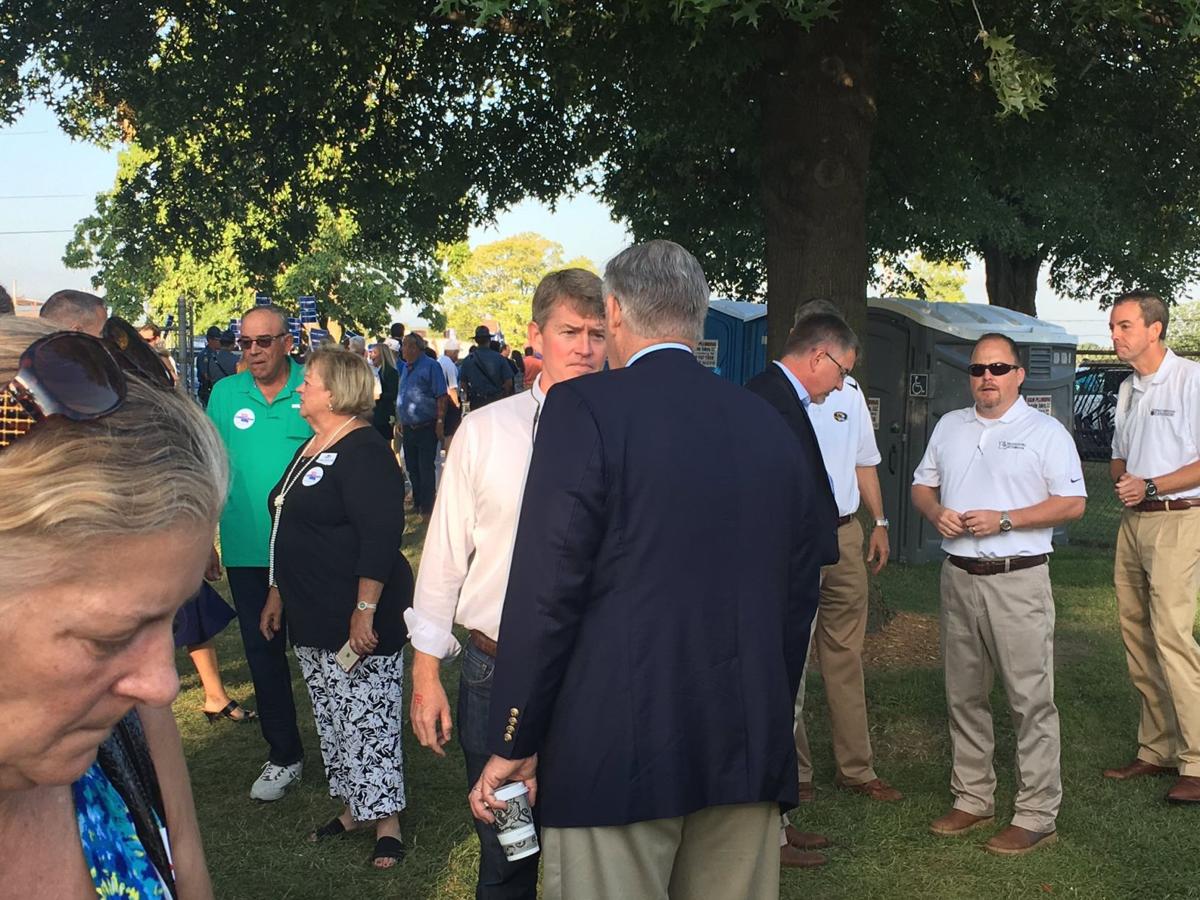 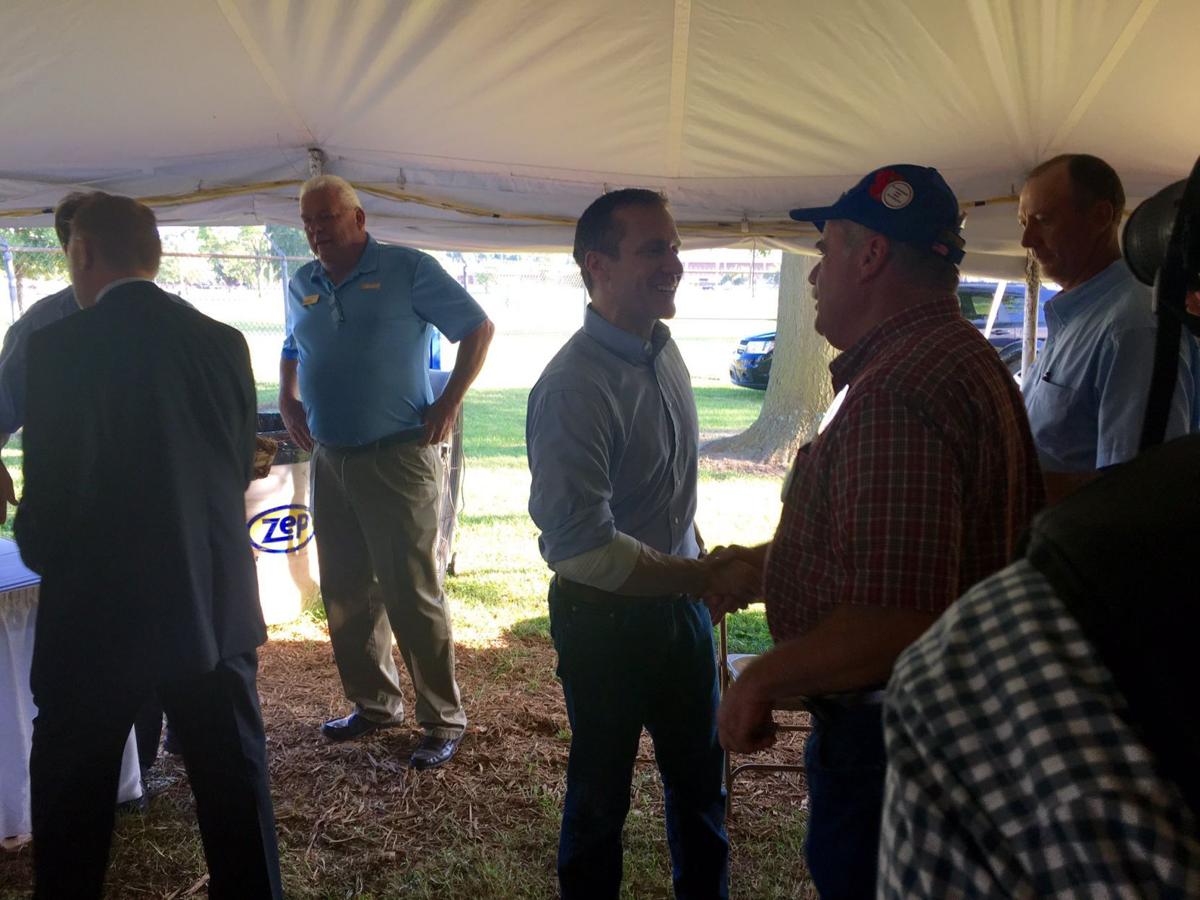 Missouri Republican gubernatorial candidate Eric Greitens shook hands Thursday, Aug. 18, 2016, the day of the annual ham breakfast at the Missouri State Fair. Greitens stayed and spoke to attendees for about an hour. Photo by Celeste Bott. 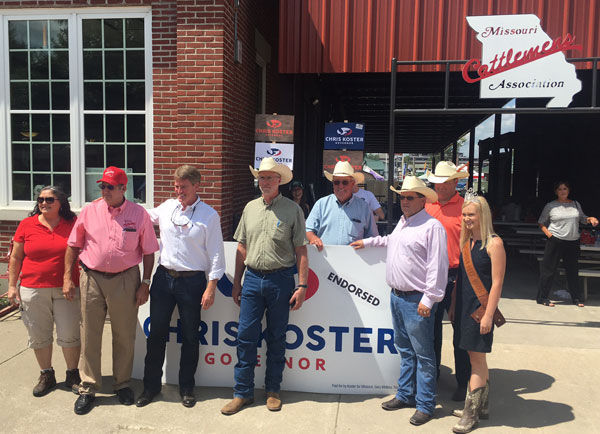 SEDALIA, Mo. • Candidates descended on the Missouri State fairgrounds on Thursday to shake hands, eat ham and mingle with the state’s agricultural groups and leaders.

It’s a longstanding tradition for anyone running for a high-profile public office. Candidates stump during the governor’s annual breakfast, and supporters wield signs and staff booths to draw fairgoers’ attention to the races. It’s often an all-day exercise.

But it wasn’t for GOP gubernatorial candidate Eric Greitens — a former Navy SEAL who is running as a nontraditional newcomer. After an hour greeting attendees at the breakfast, he left the fair for other events throughout the state. Citing time constraints, a staffer for Greitens said he wasn’t available for comment.

Farm-based lobbying groups tend to lend support to conservative candidates, who spend their day at the fair meeting and speaking with those supporters. But in the 2016 race for governor, they’ve favored Attorney General Chris Koster, a Democrat, over Greitens. Koster recently received backing from the Missouri Soybean Association, the corn growers association and the Missouri Farm Bureau — which endorsed a Democrat for governor for the first time ever.

After adding yet another agricultural endorsement to the list Thursday — this one from the Missouri Cattlemen’s Association — Koster spoke about Greitens’ pitch as a political outsider.

He pointed to his farm-based endorsements as an example.

“These are conservative, rural folks who are coming together with a conservative Democrat who prioritizes agriculture as economic development,” Koster said. “This is a good example of folks coming together, bringing Missouri back together for big goals.”

Koster has taken conservative stances on issues such as voter identification. And the Greitens campaign has maintained that “endorsements don’t move voters like they used to.”

Also attending was Missouri Secretary of State Jason Kander, a Democrat, who has similarly presented himself as the alternative to a longtime politician in challenging Sen. Roy Blunt, a Republican.

“All the momentum is really on our side in this race,” Kander said. “It’s really a clear choice between somebody like Senator Blunt, who’s been in Washington nearly 20 years and really does whatever special interests tell him to do, and somebody like myself, a veteran of the war in Afghanistan, who represents a new generation of leadership.”

Blunt touted his endorsements from agriculture groups, but also pointed to other support stemming from his work on health care policy.

“All the agriculture groups in the state engaged early on my behalf,” Blunt said. “Because of things we’ve done with mental health research and health care equity, and federally qualified clinics, we have lots of people helping that often aren’t involved in political campaigns in our state, and I’m grateful for that help.”

Others working the crowds included Josh Hawley, an attorney and Republican candidate for attorney general. Also on hand were former Rep. Russ Carnahan, a Democrat, and GOP state Sen. Mike Parson, both bidding to be the next lieutenant governor; and Sen. Eric Schmitt, R-Glendale, vying for the state treasurer’s office.

After the breakfast, Gov. Jay Nixon said he was “heartened” that candidates were talking more about the issues after some contentious primary races.

“I think some of that is missing on the national scene, when each day is kind of a reality show about what people say or mistakes or campaign strategies and all that sort of stuff,” Nixon said.

The city will also be issuing $100 gift cards and offer time off for city workers who want to get vaccinated.

Missouri Republican gubernatorial candidate Eric Greitens shook hands Thursday, Aug. 18, 2016, the day of the annual ham breakfast at the Missouri State Fair. Greitens stayed and spoke to attendees for about an hour. Photo by Celeste Bott.